The perfect place for a regenerating holiday? A wood cabin in Seabeck, Washington. 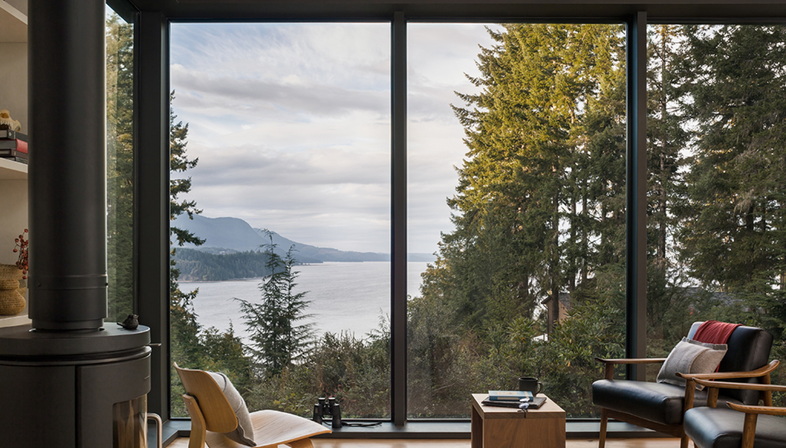 The perfect place for a regenerating holiday? A wood cabin in Seabeck, Washington. Little House is the work of Seattle-based firm, mw|works architecture + design and it stretches the boundaries of this small construction into the natural surroundings.


Seabeck on Hood Canal - a fjord forming the western lobe, and one of the four main basins of Puget Sound in the state of Washington - is a town whose history is rooted in lumber. Obviously fitting for a village established in 1857 around the large sawmills of The Washington Mill Company, when there was a huge demand for lumber due to the gold rush in California. But in 1880, the demand for wood was dwindling and most of the easily accessible trees had been felled, leading on the one hand to the slow decline of the village and on the other to the regeneration of the hugely exploited environment.
Here in this lush wildness, on a slope overlooking Hood Canal with views of Dabob Bay is where Little House now stands. It was designed by Seattle-based firm, mw|works architecture + design, known to our readers for their deep respect for nature (link projects). Something they share with the owners, who live full time in Texas but after spending many summers with family at a nearby property outside Seabeck, decided they wanted to build their own solitary getaway here.
The initial design ideas focused on crafting a compact, modern structure, which would be both simple and inexpensive to build. The house is intentionally restrained on an existing footprint in the forest and grew into a 105 square metre indoor area on a lot of roughly 6,900 square metres in all.
Little House by mwworks is a simple box with large carved openings in both the roof and walls that selectively frame the views, and bring in as much natural light as possible. The north and west elevations of the architecture are more transparent and draw the landscape and distant view into the built space. The more solid south and east sides shield views from the driveway and from the neighbouring properties. The exterior of Little House is clad in oxidized black cedar and blackened cement infill panels while the interior is dominated by lightly painted MDF panels and soft pine plywood.
Skylights are carved into the roof over the bedroom and the shower bringing light during the day and views of the stars at night.
The interplay between architecture and nature is emphasised by the large patio extending out into the landscape. It is also the starting point of the trail system wandering down to the water’s edge.
The mwworks architects focused on the essentials on a humble budget and managed to still capture the essence of a modern cabin, small in size but a lot bigger than its boundaries for a close-and-cosy experience with the site's stunning nature. 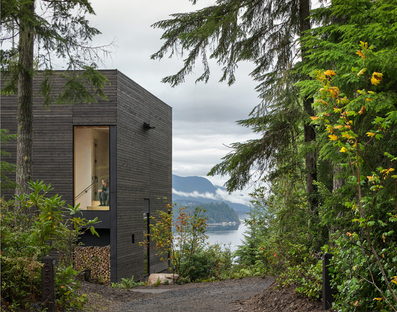 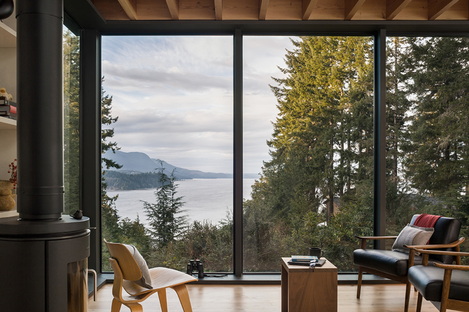 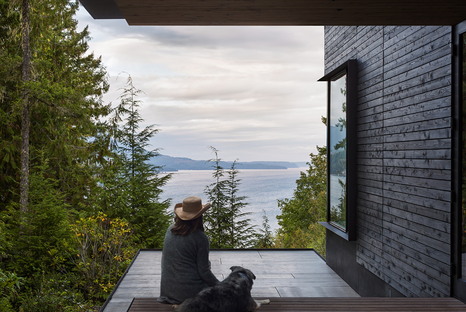 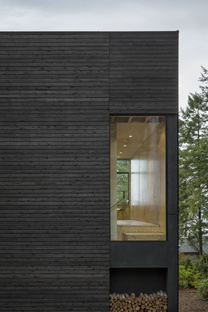 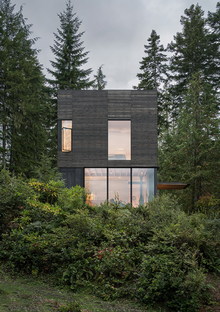