In Oman the construction of the largest botanic garden on the Arabian peninsula, and indeed the world, is underway. The project was created in partnership with the Arup, Grimshaw and Haley Sharpe Design (hsd) studios. 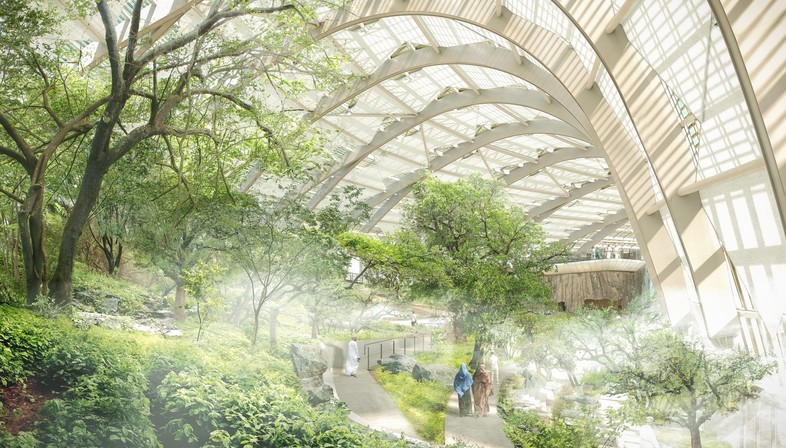 As part of Fuorisalone 2018,SpazioFMGperl'Architettura together with the Grimshaw Studio has inaugurated the second appointment with The Architects Series, the new format dedicated to discovering leading architecture studios through multimedia. The guest was architectAndrew Whalley, deputy chairman of the studio, and his interesting talk entitled “Equation”, presented the case history of the Sustainability Pavilion for Expo Dubai 2020 analysing it in the light of important considerations on urbanisation, sustainability and the future. The themes involved and focussed on in the Sustainability Pavilion for Expo Dubai 2020, can be extended to a second important project that Grimshaw presented with the Arup and Haley Sharpe Design (hsd)studios, which is still ongoing: the design of the Oman botanic garden. 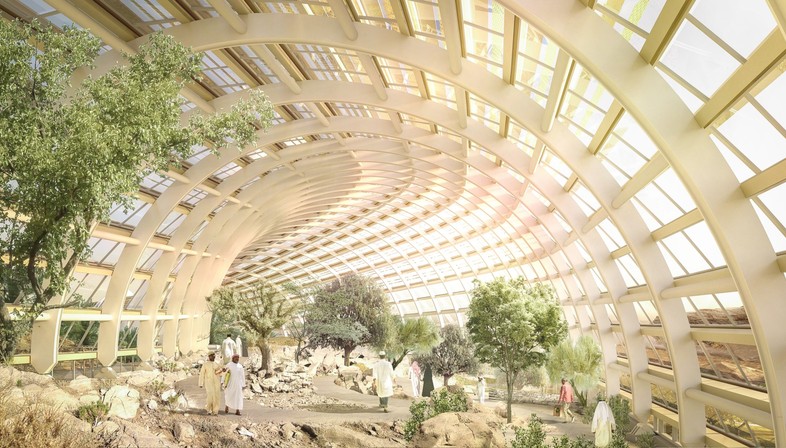 TheOman Botanic Garden has a surface area of over 420 hectares, making it the largest botanic garden not only on the Arabian peninsula, but in the world. The project, presented in Autumn 2017, is the work of three important studios: Arup, Grimshaw and Haley Sharpe Design (hsd), each one of which has contributed their skills in various areas of the overall project (engineering, landscaping, architecture and visitor experience and content). The site chosen is 35 km from the capital of Oman, Muscat, at the foot of the Al Hajar mountain range, which runs parallel to the coast of the Gulf of Oman. It is a special area. In fact, it is one of the few places in the world where the ancient seabed is still visible, following tectonic activity that produced the current configuration about 100 m above sea level. Grimshaw and Arup have worked by respecting the current altimetric structure and natural ravines in the area to position the buildings and walkways for a visitors’ route.
The botanic garden will have a large number of plant species endemic to Oman and at risk of extinction. In the centre of the site there will be eight different habitats found in the country. The immersive route designed by the architects will lead visitors on a discovering of the autochthonous species and the various landscapes of Oman: mountains, deserts and uadi (canyons where there were ancient water courses).
Two of the most delicate and sensitive habitats, where the temperature and humidity level have to be kept under control, will be housed in separate biomes. These two biomes are enclosed in sinuous, protective glass casings. The Northern Biome recreates the climate of the Northern Mountains, while the Southern Biome sees visitors immersed in a green and verdant wetland forest, typical of the Dhofar region where the "Khareef", the monsoon from the South East, ensures enough rainfall for vegetation. 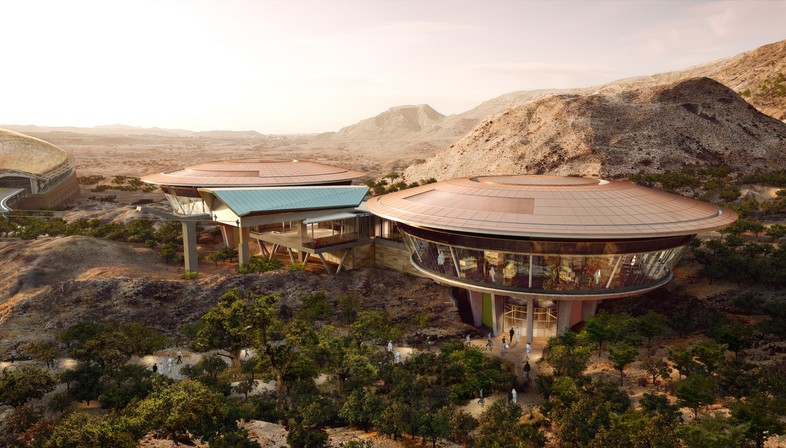 Many different aspects of the project were a real challenge for the architects, not only because it was difficult to create natural and authentic landscapes, but also because of its scale and the diversity of natural environments that had to co-exist.
Taking into account the position of the sun, meteorological models and possible human behaviour, the architects created the visitor routes through the site in order to allow as much comfort as possible for visitors, while respecting the delicate plant environments. For example passive and active shade, an optimal relationship with natural light, cooling and irrigation for the plants, and the shape and materials used for the building all combine to obtain the highest possible standard in energy certification, the LEED Platinum. 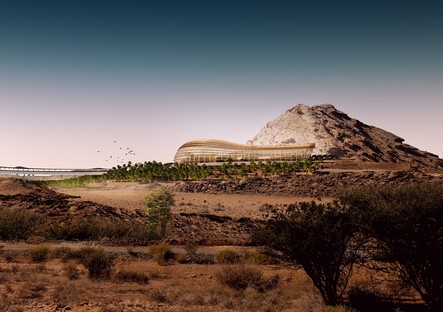 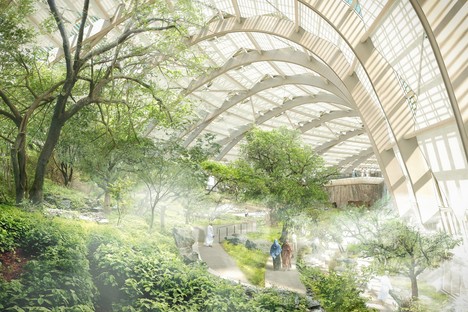 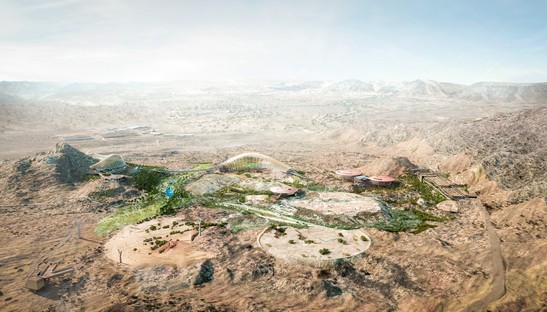 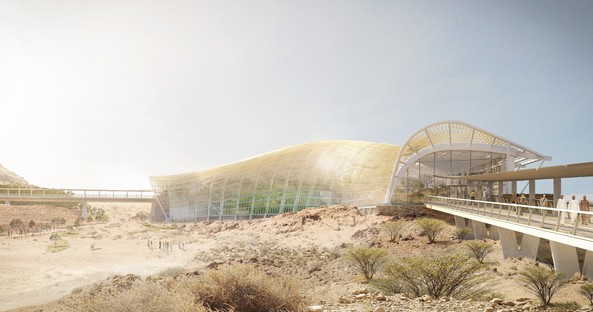 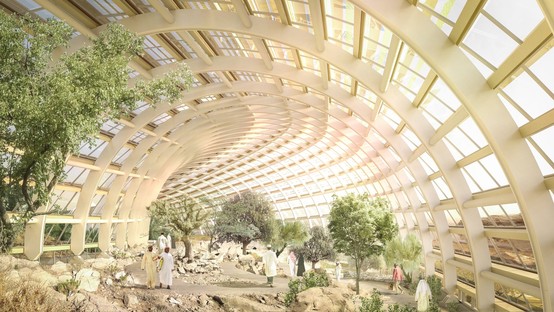 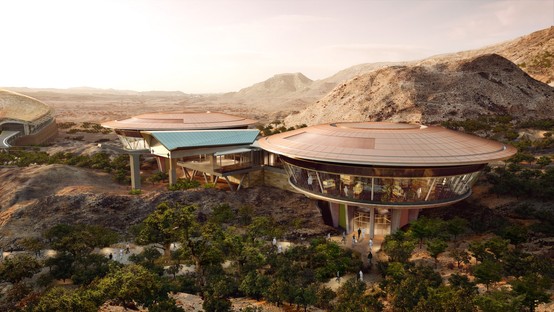 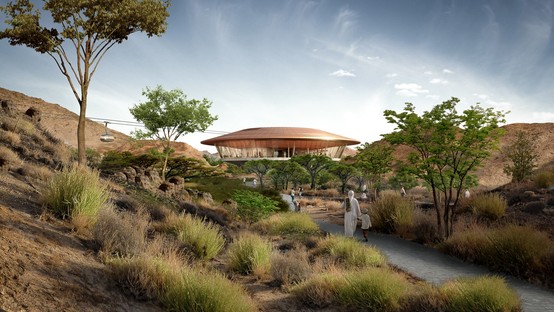