The Heydar Aliyev Center in new Baku is one of Zaha Hadid’s boldest and most amazing projects. It makes a strong mark on the city and optimises use of the vast size and great complexity of its site, a hill in the urban area of the capital of Azerbaijan. The plastic form of a building designed to be photographed is silhouetted at the top of the hill. The materials used to make the panels covering the building also become the pavement of the plaza outside it, creating semi-public spaces where people can stop and enjoy their city. 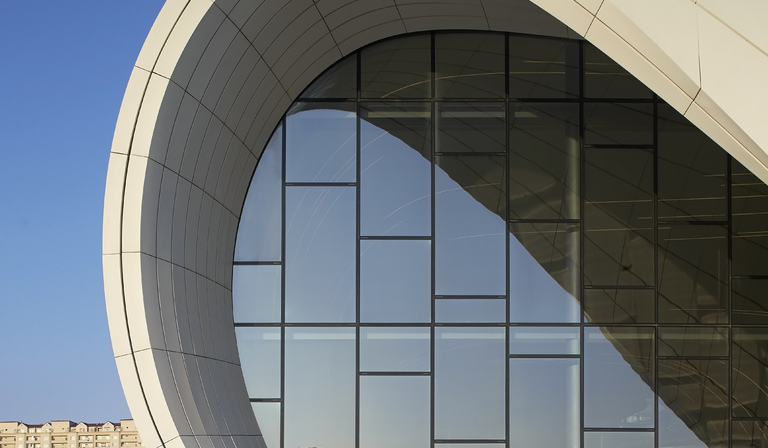 Zaha Hadid has designed another grandiose public building: type of construction which best expresses her unique contemporary view. The Heydar Aliyev Center, designed by the Iraqi-British architect’s practice after winning a competition held in 2007, adds its lights to the sparkling skyline of Baku, the capital city of a rapidly changing country. A concrete structure and a three-dimensional frame support a surface made of materials which give the building that plastic form so often associated with Hadid’s work (Glass Fibre Reinforced Concrete and Glass Fibre Reinforced Polyester).

Like many former socialist republics, after gaining independence from the Soviet Union Azerbaijan wanted to make a clear break with its past. It expressed its rejection of everything the Moscow government represented through architecture, using it as a way of bringing the Azer people closer to Europe and to the West with an image of modernity. From HOK’s Flame Tower to GMP Architekten’s Baku Crystal Hall, recent buildings in the capital seek to impress its people with the wealth resulting from recent discovery of oil and natural gas reserves.

At first Hadid’s project might not seem to have anything to do with its context. Objects on an architectonic scale do not look like their context in a purely figurative sense. But the Heydar Aliyev Center project goes beyond the confines of architecture to become an artistic installation that takes over its location, in the style of Anish Kapoor: a landmark that aims to become an urban symbol with its imposing size and invitation to get the whole city involved.

The Heydar Aliyev Center, a cultural centre with an auditorium, a bookshop, a coffee shop and semi-public spaces, stands on the top of a hill in the city’s newest neighbourhood, with shops, offices and homes, flanked by the road of the same name, which leads from the airport to the centre of Baku. Hadid exploits the natural slope of the land to create a path through the greenery, an uphill walk from the underground parking lot to the entrance to the centre. As in many of Hadid’s projects, this zig-zag line marks a clear break with the city’s past: it is a strong signal, with a perspective that guides the eye towards the top of the hill, where the white plastic form of the building stands out against the sky.

The continuous curve of its surfaces also affects the courtyard at the side, doing away with the distinction between the roof of the building and the outdoor pavement. Without a “main façade”, the building looks completely different when viewed from different angles, so that it looks as though it is changing all the time. A manifesto of an increasingly open, multiple, democratic concept of culture, Hadid’s building makes use of the full width of the available piece of land to give the city an urban stage. 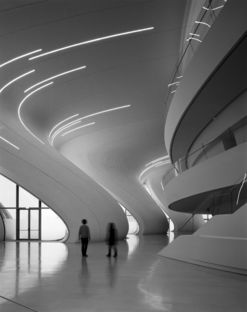 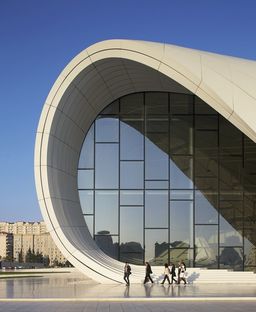 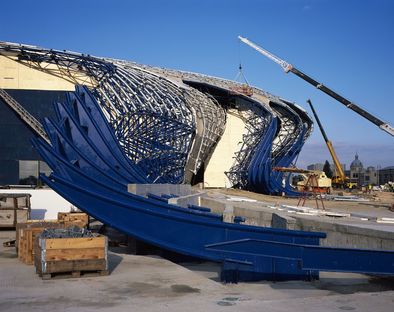 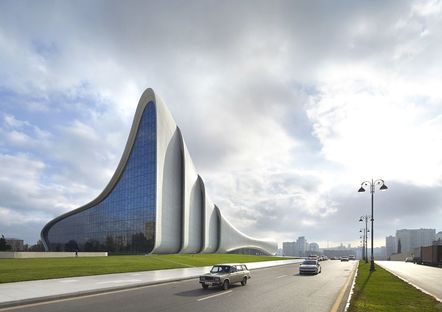 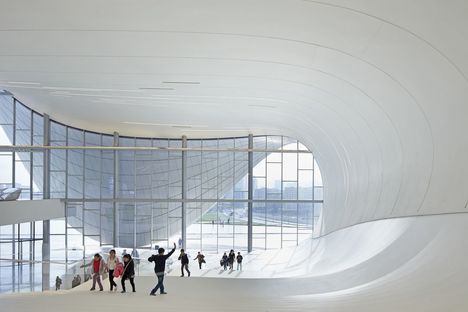 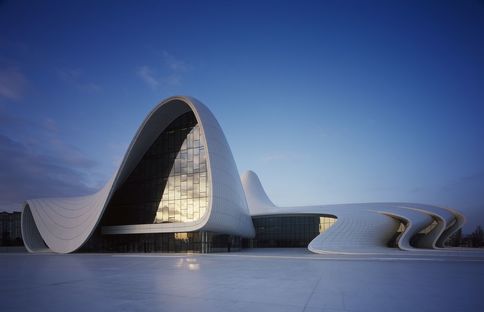 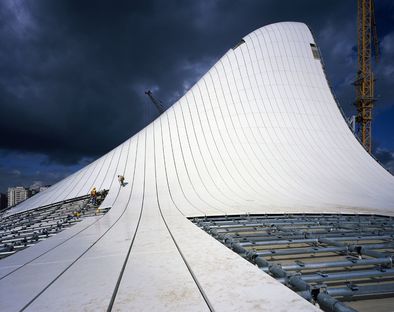 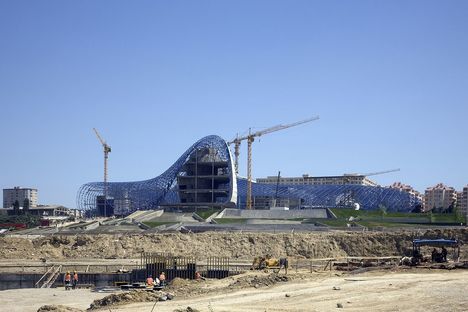 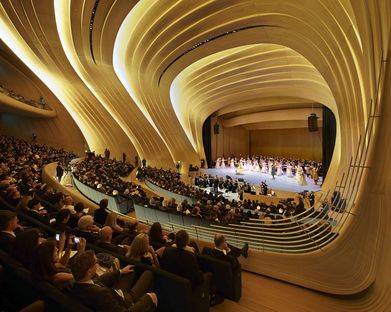 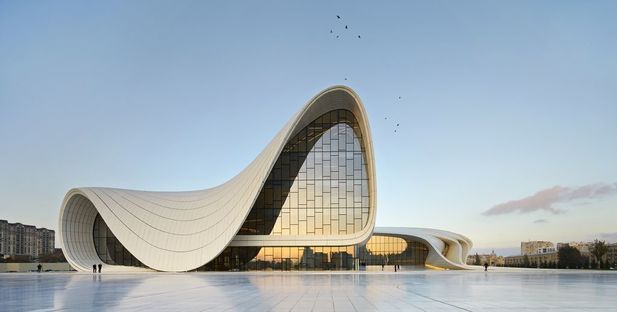 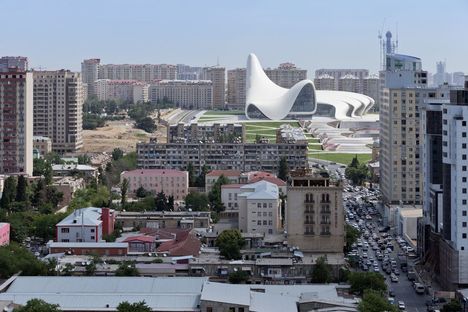 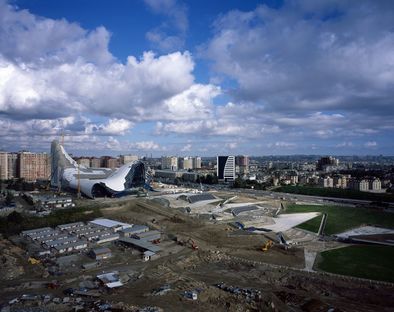 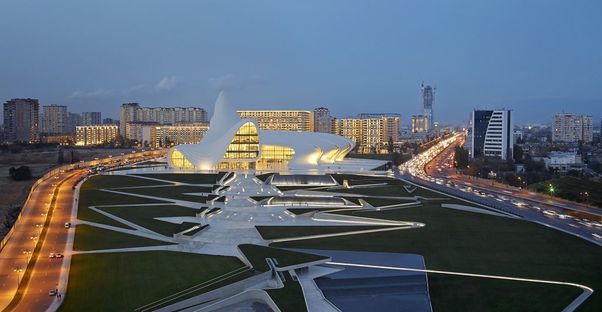 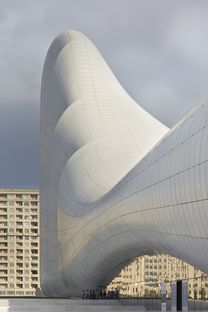