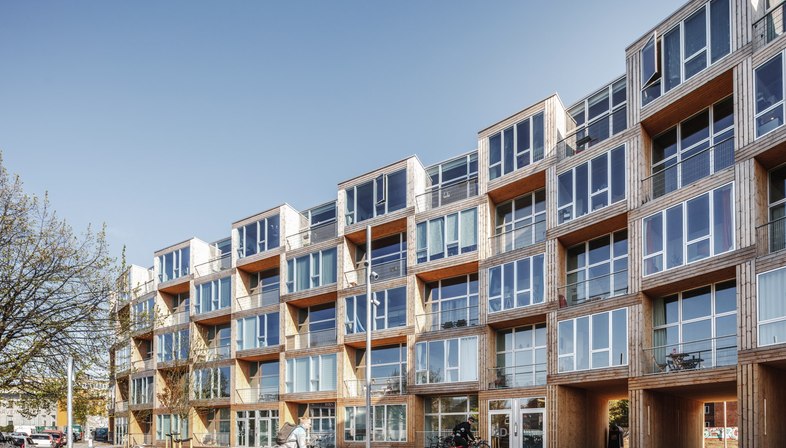 Jan Hyttel, President of Lejerbo Copenhagen, said that BIG Bjarke Ingels Group’s new “Homes for all” project leaves room for the imagination and demonstrates great faith in the discipline of architecture.
“Our ambition was to create affordable apartments by the world’s leading architects. Together with BIG, we have succeeded in creating sustainable, safe and functional homes that see eye to eye with the people who live in them.”
And so in 2013 the partnership began between what may be the world’s best-known architectural studio at the moment, BIG Bjarke Ingels Group, and the Danish non-profit association Lejerbo. Founded in 1944 to provide low-cost but high-quality housing, Lejerbo is inspired by the theories of architect Jan Gehl, who has always championed a form of development centring around pedestrian and bicycle paths. The 66 apartments in a total of 6800 square metres of space northwest of Copenhagen were designed and built on the basis of a strategy developed by Jan Gehl which focuses on residents’ public, social life.
This was an extremely exciting concept for BIG, which has already built free housing complexes based on the same principles, such as the famous 8 house, also in Copenhagen, in which, according to the residents, the building’s spatial organisation encourages a sense of community, of security and teamwork.
Another principle underlying the building at Dortheavej 2A, known simply by its address, is the attempt to achieve a level of quality in materials, construction and spatial qualities which goes beyond the budget available. BIG’s experience designing futuristic residential buildings on the architectural scene of the past twenty years turned out to be very valuable. But hearing Bjarke Ingels speak of this project helps us understand how complicated it is to attempt to build top-quality residences on a limited budget. The architects came up with a solution involving use of a single prefabricated rectangular module, repeated and stacked in alternation to form a configuration in which the spaces gain a metre of height, reaching the considerable height of 3 and a half metres. BIG put the kitchen and living room in these larger modules, so that the sensation created in the semi-public areas is one of greater visual breadth, also in relation to the adjacent rooms, which have lower ceilings and are reached via a couple of steps.
Particular attention was paid to the design of the layout, cutting costs by leaving details in view, such as the concrete floor slabs visible as ceilings on the levels below them, cutting the overall cost of coverings.
The social housing project as a whole abuts onto a green area to the north and the street on which it stands. The wave layout inspired by Aalto ensures that every single apartment has a slightly different point of view from all the others, giving each of them its own character. strong>The building’s curve off the straight line of the street opens up a semi-public space in front of it, a sort of plaza where people can get together and relax, which will be planted with cherry trees and supplied with parking areas for bicycles, still the best way of getting around the city according to Bjarke Ingels. Crossing the plaza and passing underneath the building we come to a second area, a larger courtyard which is greener and more private in nature. The characteristic chequerboard motif, accentuated by floor-to-ceiling glass walls in the modules on the short sides, not only establishes the visual identity of the complex, making it easily recognisable, but makes the walls permeable to ensure they are not perceived as boundaries, as limits or urban barriers.
Limitation of the building to only five levels high and the colour palette of the materials in view, such as concrete and wood, promotes the building’s inclusion in its particular context in an outlying part of the city that has historically been characterised by mechanical workshops, warehouses and industrial buildings constructed between the '30s and the '50s.
The floor-to-ceiling windows let plenty of daylight into the apartments, offering broad views of the courtyard or the neighbourhood around the complex. In Denmark it is standard to establish a constant dialogue between inside and outside, so that people can not only look out but see into the houses from the street, without any judgement or reserve. 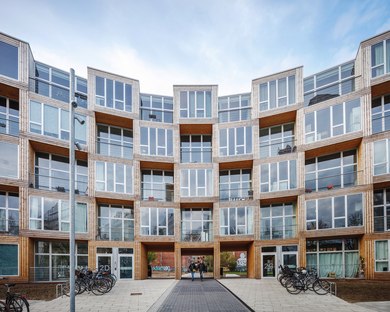 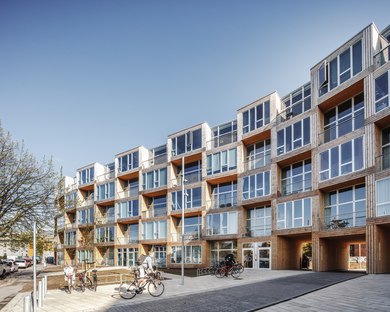 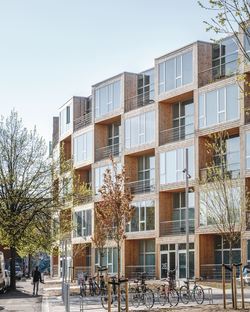 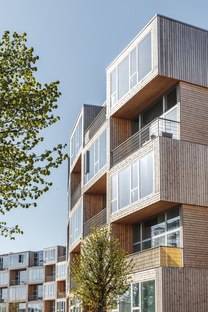 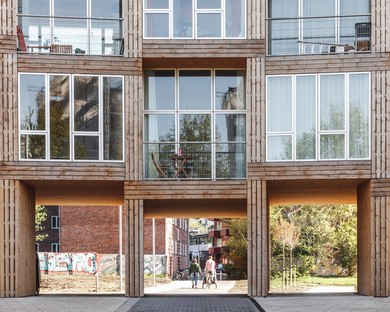 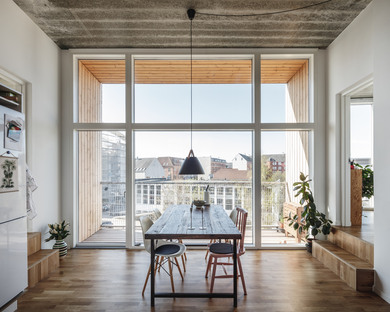 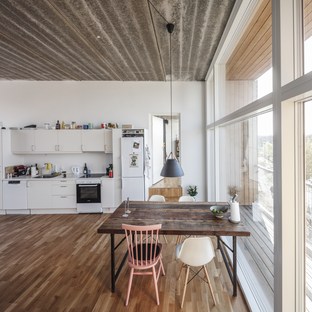 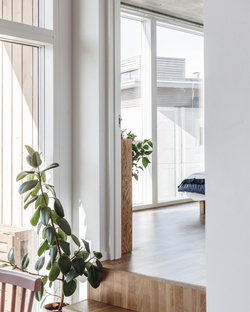 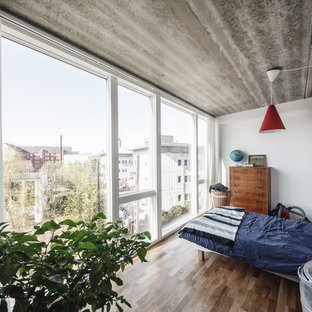 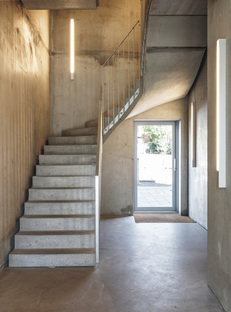 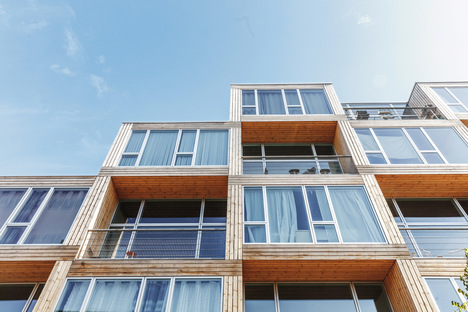 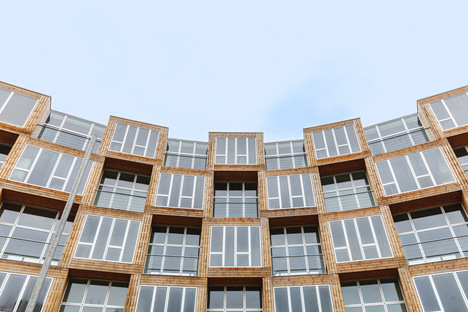 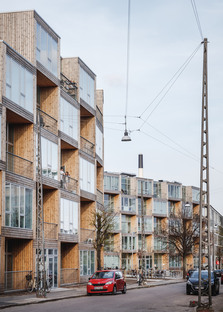 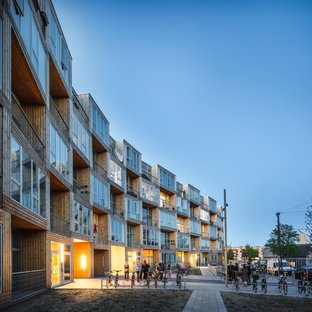 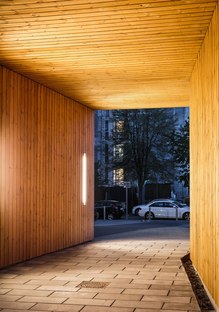 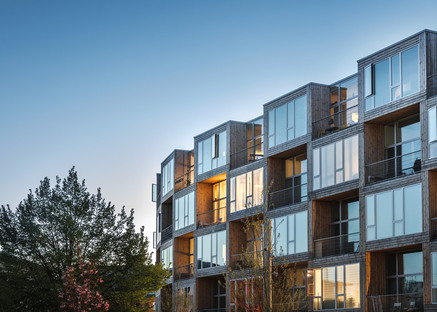 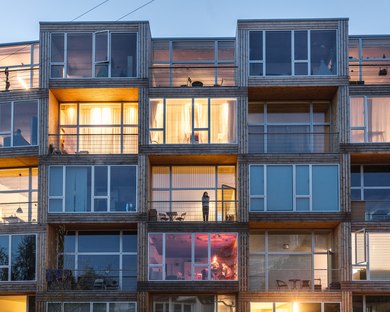 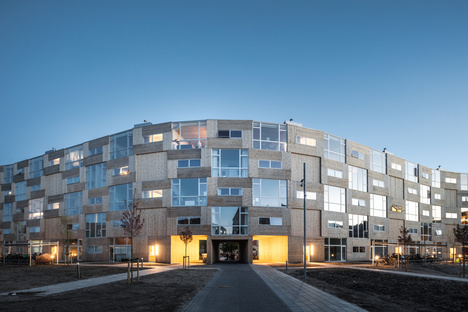 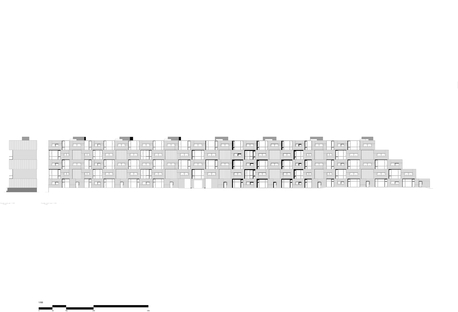 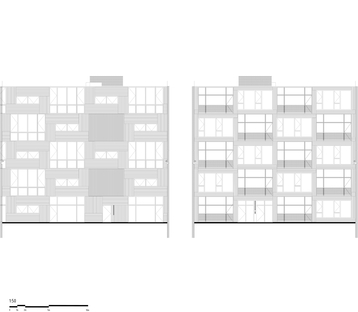 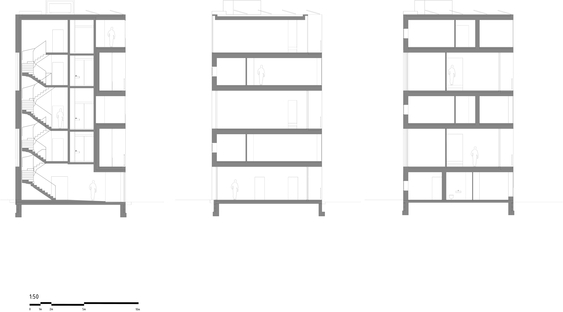 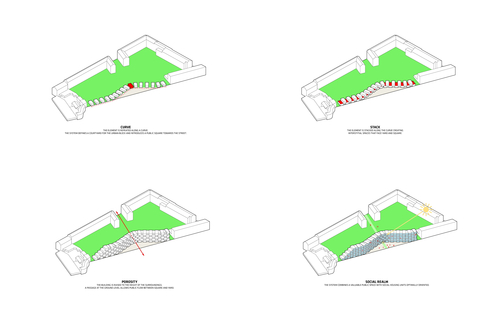