The design of Davanzo Associati’s adult day care centre for Alzheimer’s patients in Castelfranco Veneto was inspired by Cary S. Henderson’s “Partial Vision. An Alzheimer’s Journal”. In Martina Davanzo’s project, patients can walk around a circular route which acts as a filter between inside and outside. 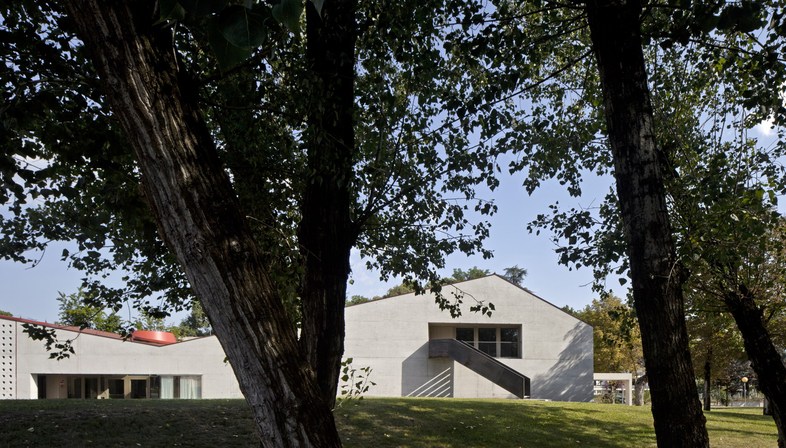 The Adult day care centre for Alzheimer’s patients designed by Martina Davanzo and her studio in Castelfranco Veneto, in the province of Treviso, completes the city’s care facilities, which begin with a seniors’ centre not far away, in the same park area.
In the ‘70s the Honourable Domenico Sartor appointed Giuseppe Davanzo and Livia Musini, founders of the studio now run by their daughter Martina, to design the first building. Just outside the historic city centre of Castelfranco Veneto, the building with its big windows amongst the greenery already pointed the way toward recognition of the need for a form of architecture that would aim to improve patients’ wellbeing. Martina Davanzo’s father was an expert in the design of social services, while her mother was one of the first female landscape architects, and both had studied in the rationalist school in Venice. Martina Davanzo has now taken over the studio, and her project is the result of a method in which layout is determined by study and reflection on the specific nature of the illness afflicting the new facility’s 30 guests.
Inside the green area representing an ideal continuation of Villa Bolasco and the gardens of the adjacent hospital, following the demolition of the morgue, the new building stands in the northwest corner of the lot, perpendicular to the seniors’ centre, serving as a backdrop to the view of the old complex as seen from Via Ospedale. Its position on the perimeter expands and borders the landscaped area, leaving the parking area on the outside.
The figurative effect created by the succession of gabled roofs, representing a stylised archetype of the home, is intentionally attenuated with the use of reinforced concrete as a structural material left in view. The emphasis on the east to west axis rather than the vertical axis, with only 3 stepped levels (ground floor, ground floor+basement, basement and ground floor+first floor), and an additional excavation in the front garden, attempt to integrate the building into its green surroundings.
The main façade to the south is divided into a portion with big windows that bring light directly into the foyers and a portion punctured with an orderly series of openings that modulate the light in the spaces where rehabilitation work is done. This division corresponds to an internal division by function: the staff area to the east, with warehouses, storage spaces and dressing rooms in the basement, and meeting rooms, offices, and a library on the ground floor and first floor, all with a separate entrance; and the patients’ area to the west.
These two sections, which have separate access routes, co-penetrate one another in the coordination area where guests are received at the main entrance in the centre of the building.
In the area for Alzheimers’ patients, the interiors are specifically designed to take into account the symptoms of the illness and promote wellbeing, orientation and management of patients’ crises.
Martina Davanzo says that her spatial considerations were based on reading the book by Cary S. Henderson, a history professor who was diagnosed as having early onset Alzheimer’s and decided to document the progress of his illness, recording his thoughts and experiences. His book “Partial Vision. An Alzheimer’s Journal” came out in the ’90s and still offers precious testimony of patients’ condition, needs and fears.
One of the most significant elements the architect introduced after reading the journal is the circular route around the activity rooms. A wall with truncated cone-shaped openings surrounds the space inside the building, creating a filter space, an indoor circuit which is accessible to the patients, who at a certain stage in the illness are often inclined to keeping walking all the time. This path, which includes the patio and garden of beech trees, is lit up by direct light mitigated by the grid of openings. In the interiors designed for them, the patients enjoy a home-like atmosphere evoked by wooden finishes and big windows letting in indirect light. There are no corridors linking different spaces, which helps the patients stay orientated, as they never encounter anonymous zones but only rooms for specific, easily recognisable activities. The entire ward is arranged on a single level, with no staircases or ramps, helping patients to remain independent and feel comfortable. The dialogue between spaces established by the widespread presence of glass offers an overall vision and perspective for both patients and family members. 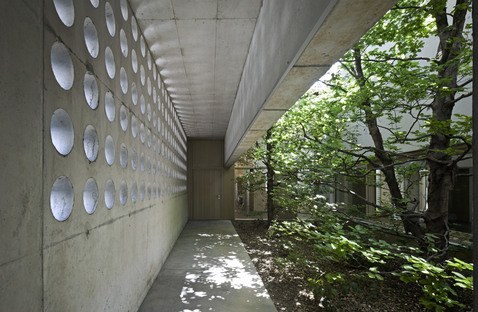 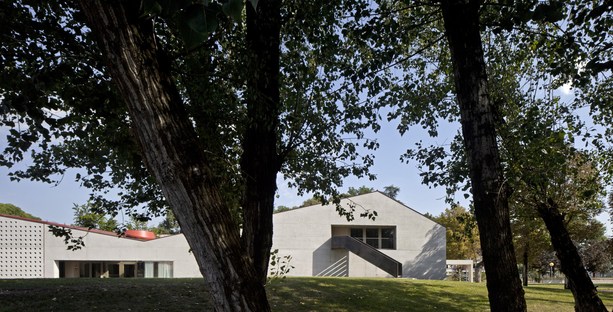 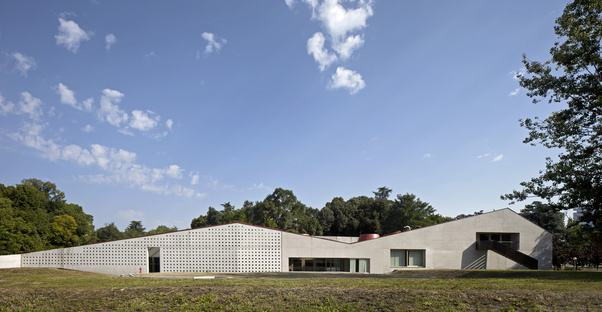 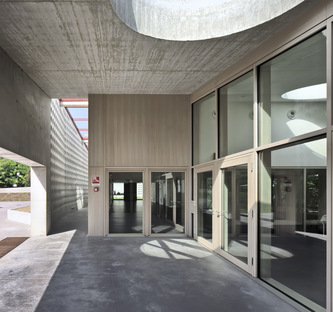 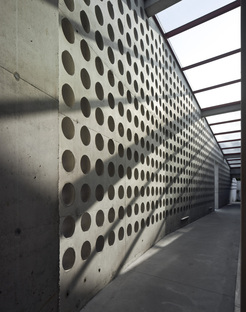 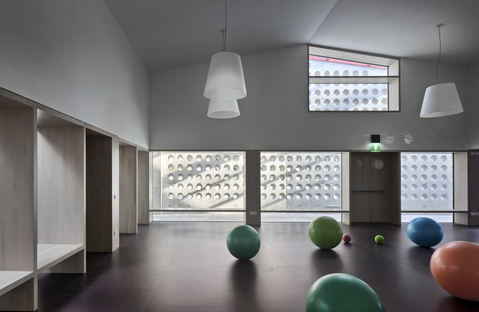 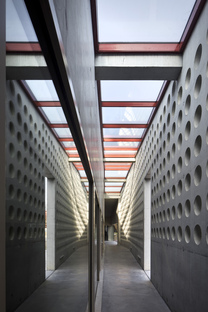 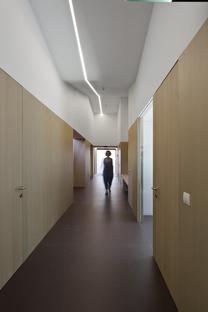 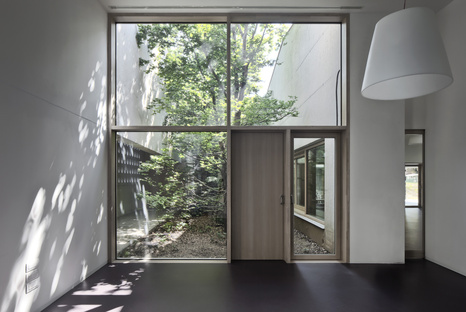 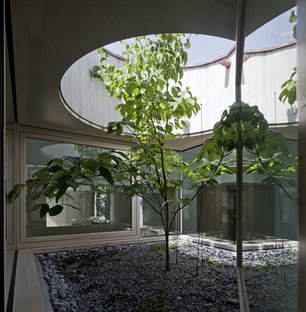 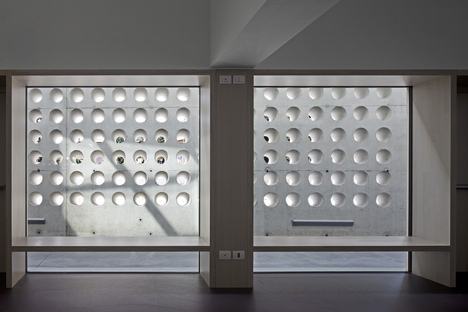 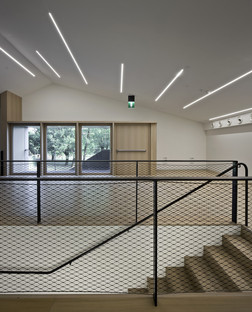 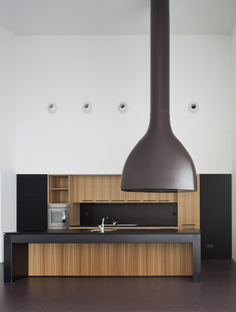 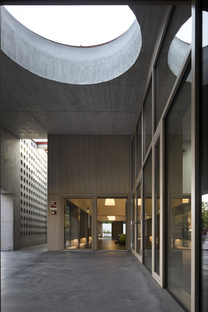 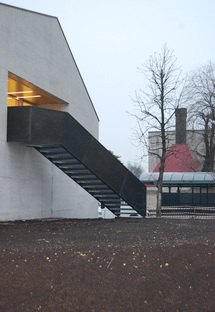 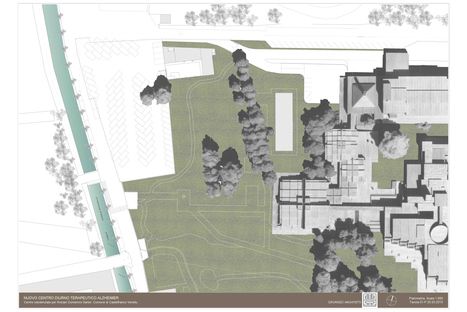 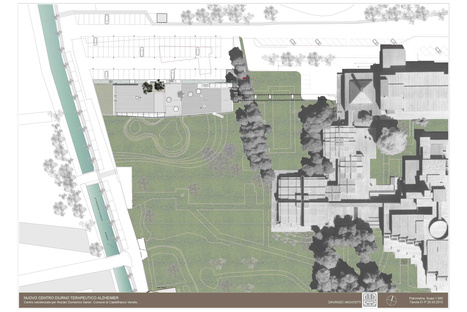 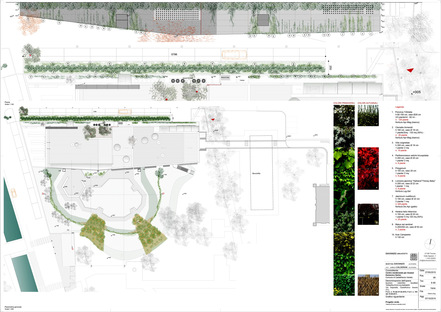 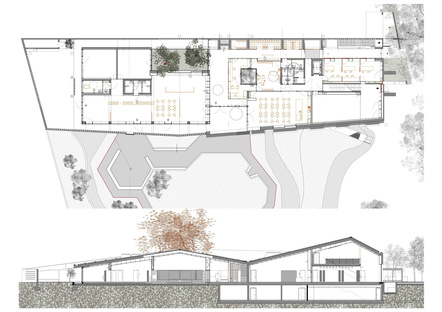 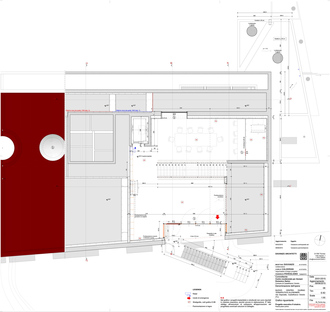 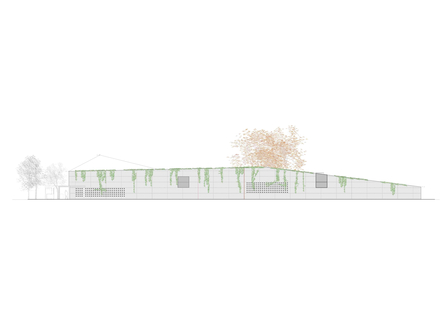 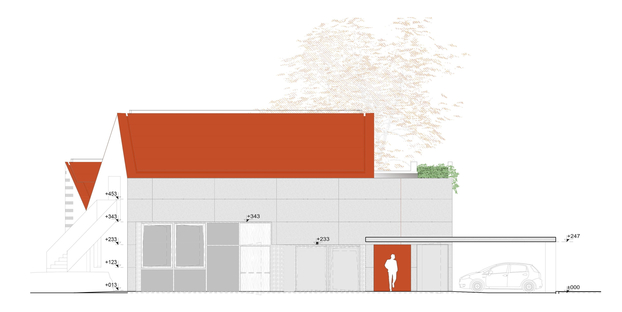 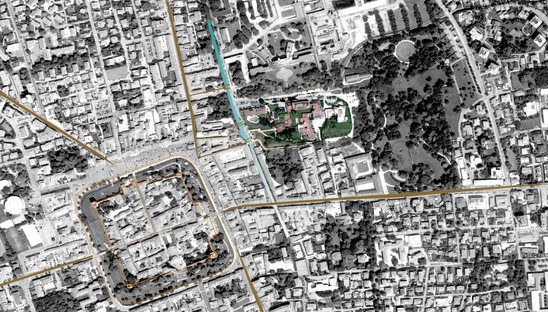