In Ginza, one of the most glamorous and exclusive districts in Japan, among the most elegant fashion boutiques, the most stylishly alluring restaurants and sushi bars, a clinic entirely dedicated to regenerative treatments and the recovery of an aesthetic form has been this year inaugurated. A peaceful oasis in the bustling, crowded streets. Conceived by Union-Tec design group, it has been followed in its realization by the architects Daisuke Okuma and Eri Nagashima . 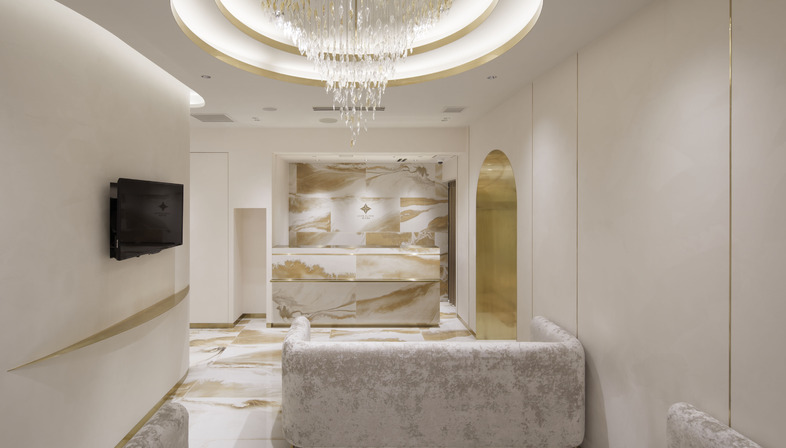 Envisioned as a 'sanctuary dedicated to beauty', it derives its inspiration from an highly authoritative source which dates back to the vernacular of a culture, that has always been intimately linked to Mother Nature from the very beginning.
The architects emphasizing the spirit that connotes and finalizes the treatments, refer the idea of beauty to an ancestral symbol, a small statuette only 11 in. high, an authentic clay jewel, one of the most representative and charismatic artifacts of Jomon production, the Japanese oldest pottery, belonging to the most distant times. Little Jomon Venus, designated national treasure, epitome of beauty and fertility, resembles a pregnant woman, with broad hips and prominent breasts and, like many other female figurines with the same appearance, it seems to have been used in ritual ceremonies to invoke reproduction and regeneration of life. This emblematic reference imprints the intimate and aesthetic character of a place that aims to perpetrate that vital lymph which is part of each of us and must continually renew itself to regain those energies gradually weakened and that beauty which has become a little dull. The architectural gesture reproposes as a formal choice the curved and voluptuous lines of the divinity, conferring to the environment an identity deeply connected to this philosophy. The curvilinear line becomes a fundamental element of the interior configuration and impresses its soft sensuality to every single detail. 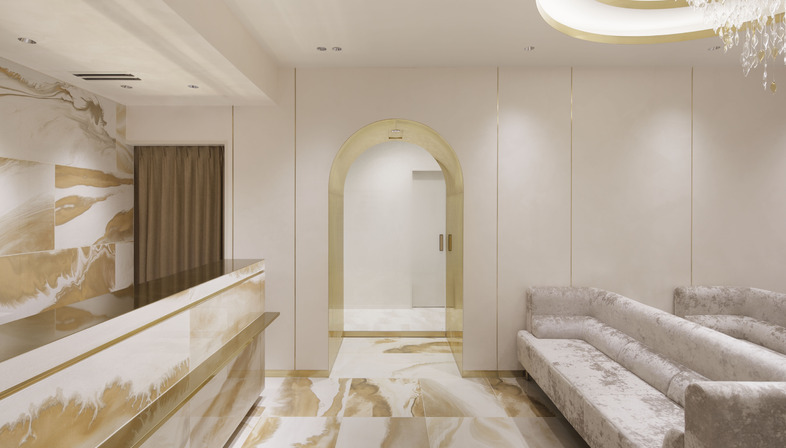 The sign generously welcomes with an ample parable right from the arrival with warm embrace, to continue along the path that leads to the treatments repeating itself with different patterns. The walls in their sinuous evolution underline the fluidity of the journey, enlivened by a discreet, indirect light that diffuses from the rounded profiles of the false ceilings. The monolithic material chosen to cover the floor and part of the walls evokes a white marble with amber-colored streaks that, merging with the purity of a dominant atonality, generates a lot of intimacy, highlighting the organicity of the forms and offering the impression of having been partially carved out of the block of marble. There are several moments that polarize attention and tickle curiosity in the comfort of this waiting room. They present themselves as clues, prodromes of the experience to come and some offer themselves as a guide, a kind of trace towards the private part of the rooms dedicated to treatments and therapeutic cures. For example an iridescent trail that meanders along the length of this path. Tiny glass leaves are disposed around imperceptible threads falling copiously and at different heights from the ceiling. Their arrangement follows the sequence of the numerical series of the spiral of the famous mathematician Fibonacci. As cross studies of mathematicians and botanists have demonstrated, phyllotaxy, the order of the leaves in a plant stem, exhibits in addition to simple structures, complex morphologies, comparable to the scientist's spiral. A correlation was sought by the designers with the harmonious configuration that in nature responds to primary needs, such as not getting shade and receiving rain in every small part, searching for equally vital consequences.

The cascade of small petals, thanks to the translucency of the glasses in burnished saffron hue, releases sparks of golden brightness, anticipating, as the authors explain, the beauty that awaits each guest and satisfying the function of alleviating anxieties and tensions. The sparkling swirls of the crystals, distributed according to progressive codes and numerical sequences, causes effects of rotating movements on themselves, transmitting with their spiral-shaped trajectories vibrations and flows of energy. The spiral, on the other hand, if we consider history in its past, has always had a symbolic and magical meaning, a sort of catalyst for the energy of the cosmos, solar power and telluric forces, capable of dispensing them. 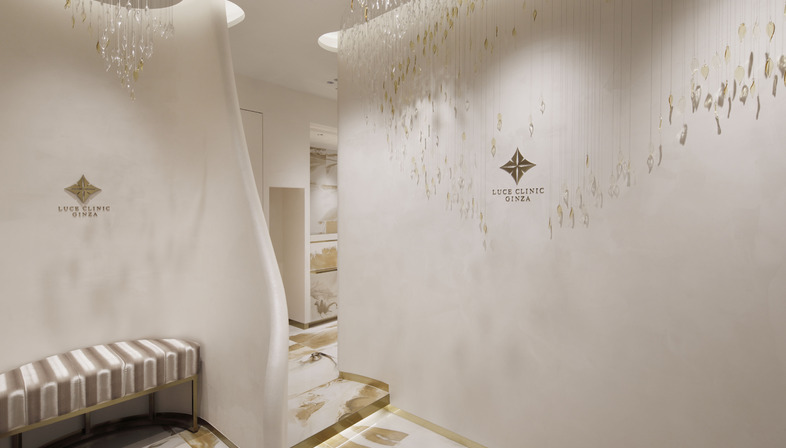 Light, as a compendium of beauty and vitality, is the name appropriately chosen to represent the institute. The waiting area entertains with great stress-free comfort the materials selected contribute to transmit the feeling of this relaxing and warm atmosphere. The Diesel Cosmic Marble ceramics in extra large format offer continuity to a precious texture that exalts the essence and aesthetics of the design, adding a touch of superb elegance in accordance with the insertions, which accompany and define the design choices with the exquisite finesse of polished gold brass, and its multiple reflections under the light. The composition is harmoniously balanced by the neutrality of tones alternating with more intensely pigmented accents.

The niche and the reception desk, flanked by an arch-shaped passage with a door in golden finish that lures the curiosity with its mysterious and fascinating presence, create a special corner enriched by the sumptuousness of the veins and shades of the Lune ceramic, which, inspired by distant worlds, evokes the galactic streaks and halos and the pallor of the lunar surface. An impressive color palette that promises a journey with radiant destinations. 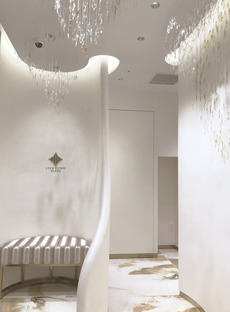 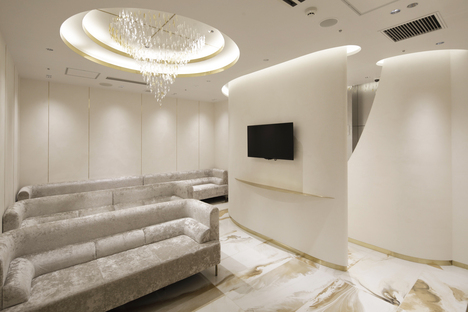 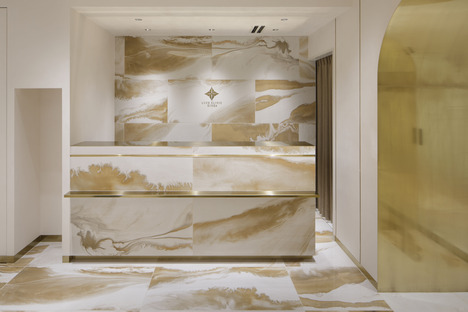 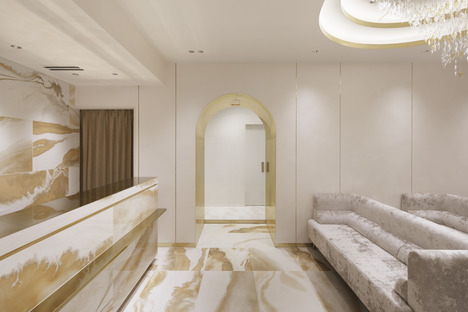 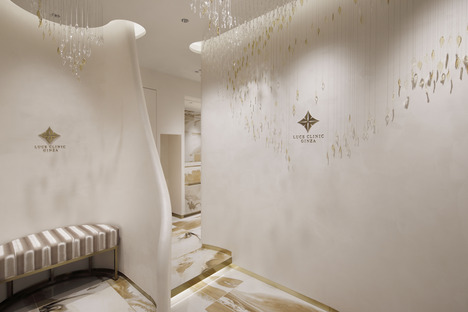 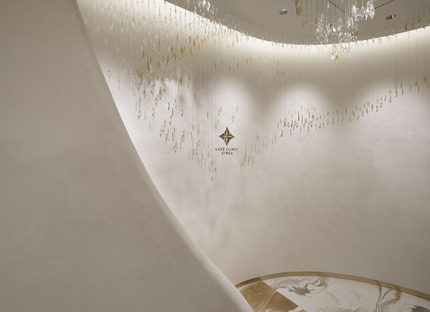 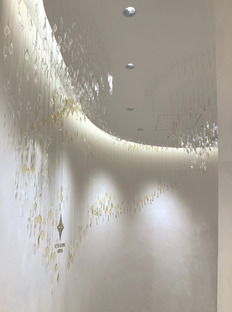 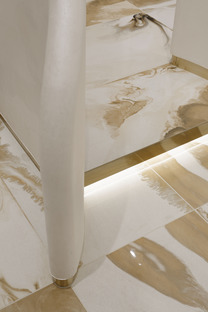 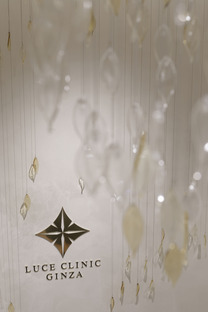 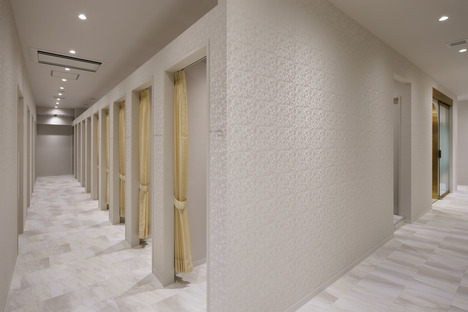 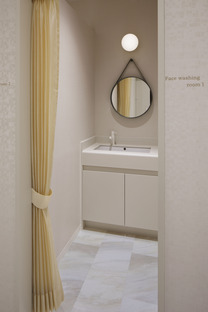 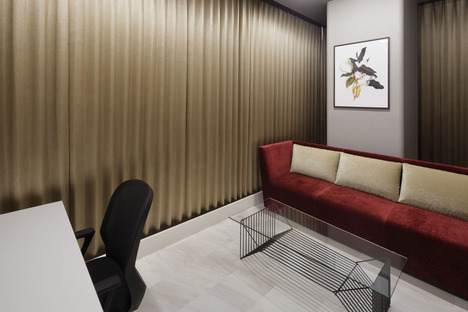 Renovation of a ward in Bufalini Hospital, Cesena