Salvagnini asked Giovanni Traverso and Paola Vighy to transform its historic headquarters into a cutting-edge production facility. A stunning new face for the company, an exceptional combination of digital design and advanced prefabrication, but also the careful planning of light with a view to improved staff wellbeing. 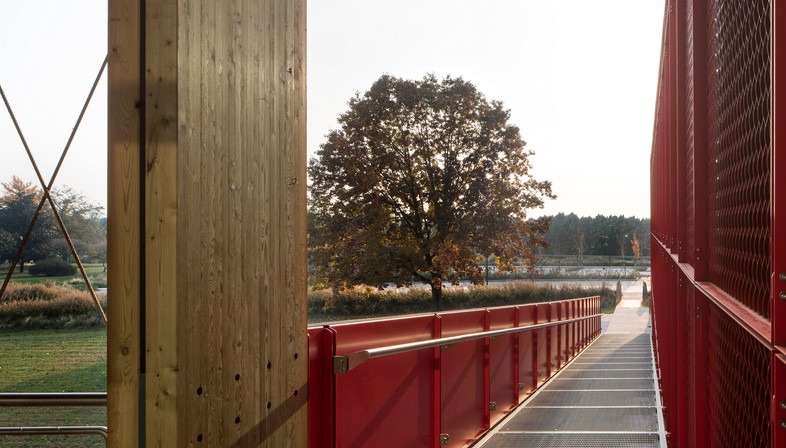 Near Saregno, in the Veneto countryside in northern Italy, along the road named after the engineer who established it, stands the Salvagnini factory, recently renovated by the Traverso-Vighy architecture firm and now open to the public. The aim was to allow curious visitors into the beating heart of the company and put the principles of Industry 4.0 on display for all to see.
Founded in Milan at the end of the 1970s, Salvagnini is one of the Italian companies born out of the post-WWII economic miracle. In 1974, with the help of subsidies aimed at encouraging the industrialisation of agricultural areas, engineer Guido Salvagnini built his factory at the foot of the Berici Hills: a production complex, connected to offices and a car park by means of a long corridor, which represented the axis for the future development of a vast industrial area which now includes 44,000m2 of indoor space and 900 employees.
The decision to enlist the help of Giovanni Traverso and Paola Vighy in crafting a new image for their main facility, as well as constructing an area dedicated to research and training, stemmed from a strong desire to demonstrate to clients and visitors alike the values and methods applied within the walls of the new factory.
What the architects were met with was a facility which, whilst founded upon the tenet of efficient production, was no longer up-to-date in terms of the prudent use of energy resources or indeed staff wellbeing, as evidenced by the imbalance between built and green spaces within the industrial complex.
Following the design plans already underway in other parts of the facility, they decided to knock down the single-storey building which overlooked the entrance area and replace it with a two-storey block that reorganises the layout, reducing the built-on area in favour of more natural, open space. Now, once they leave the car park, visitors are met by a large and welcoming garden, dominated by a very stately, leafy old deciduous tree.
This line of thinking was also followed in the renovation of the internal production areas as well as the new public interface spaces. One obvious example is the reception - a volume connecting the redesigned showroom and the new academy - which features a permeable structure made of glass, wood and steel, allowing anyone approaching from the car park to see through its impressive mass to the external courtyard. Here, another wood-decked garden bridges the gap between the covered ‘square’ where the training area is located, on one side, and the exhibition floor of the showroom, on the other, effectively expanding the work and meeting spaces outdoors and ideally re-establishing something of the dialogue between man and nature originally interrupted by the industrial site. 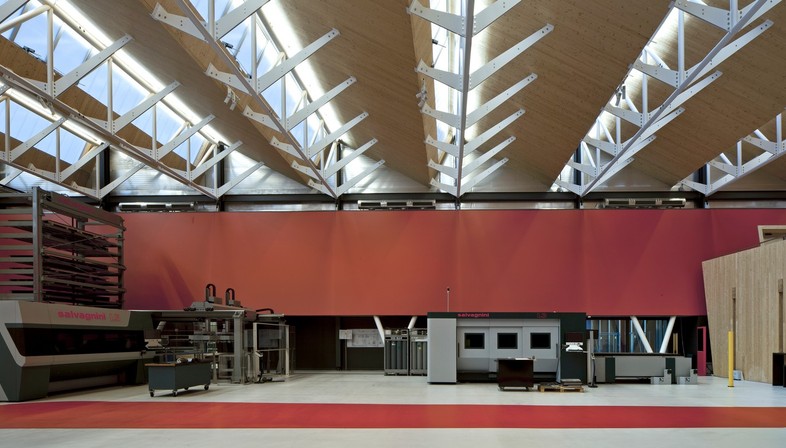 As far as sustainability goes, Giovanni Traverso and Paola Vighy have maintained a precise, consistent approach for years: opting for advanced prefabrication techniques applied to different materials, thus allowing for the construction project to be reversed in future. Contrary to what this may seem to suggest, these choices do not imply that the two architects have embarked on a path rejecting the techniques and figurations belonging to the world of artisanal, ‘classical’ creation, but rather that they are drawn towards a fruitful synergy that avoids architectural results that are ultimately cold and banal in nature.
In the case of the Salvagnini campus, the combination of different prefabricated materials, such as wood and steel, along with the meticulous design - both technical and figurative - of the individual components, not only serves a structural and resource-saving purpose, but also promotes the wellbeing of the people who inhabit and use the space, be it regularly or occasionally.
One particularly prominent example of this within the complex is the showroom building, constructed entirely using digital processes and dry assembly (laser-cut sheet metal and tubular profiles, CNC-machined XLam panels, etc.), topped off with a roof featuring a photovoltaic energy production system. In short, a model capable of allowing for the building to be reversed and recycled to a remarkable extent. Viewing it in section, however, reveals the architects’ reference to the traditional shed roofing systems usually found in the industrial world, the elegant design of the profiles and beams, the lighting carefully fine-tuned to ensure the wellbeing of the staff, and the presence of backdrops that almost resemble stage sets intended to draw the eye. All elements that make this project more closely resemble an exhibition gallery, a space designed to showcase the beguiling charm of industry. The designers themselves have hinted at this source of inspiration, remarking that: “The interior of the showroom is a vast, quiet, clean, high-tech space flooded with natural light, a million miles away from traditional image of a mechanical factory. Its structure has been carefully designed according to the principles of a museum: flexibility in terms of exhibition layouts, accent lighting systems, and interchangeable fabric backdrops to lend character”.
With this in mind, the new academy follows these same concepts of lightness and transparency with a view to fostering human wellbeing. Designed as a covered square of sorts, it features an all-glass circular volume at the centre of the ground floor overlooked by a 150-seat auditorium, connected by walkways suspended on striking Y-shaped columns. A place for both company meetings and public performances that could potentially be opened to the local community. Within, as a point of exchange between the company and external visitors, is a selection of meeting rooms and workstations with shared views of both the surrounding landscape and the communal square.
Returning to the exteriors, a bold red steel sail immediately draws the eye. Standing independently of the buildings and crafted out of H-profiles and architectural sheet metal, it not only directs visitors towards the entrance, but also serves as a thermal insulation system. 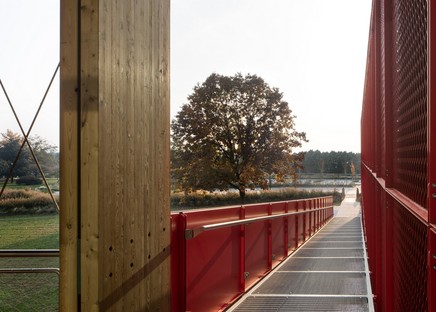 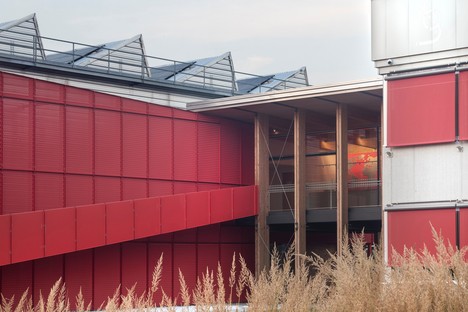 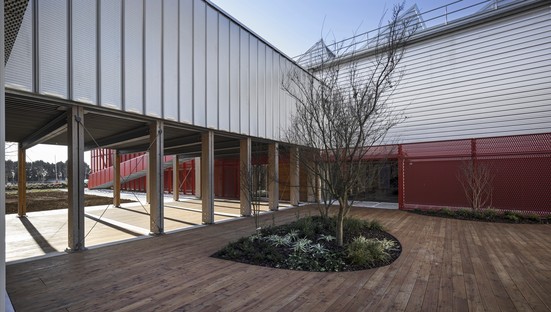 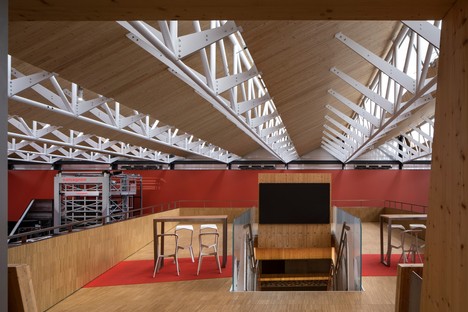 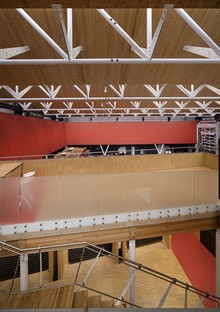 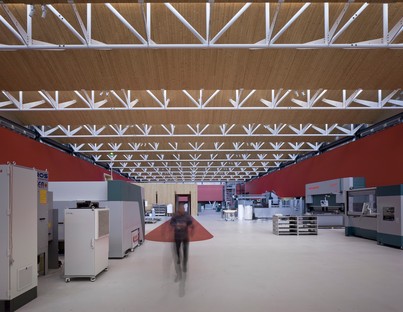 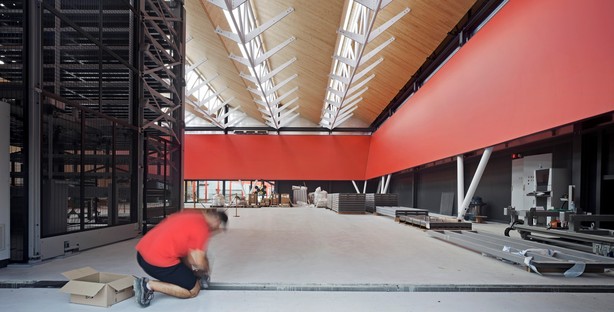 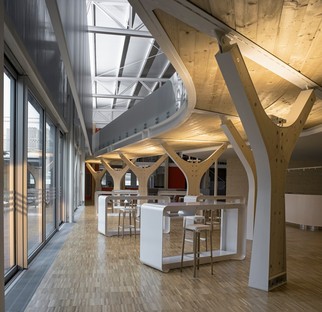 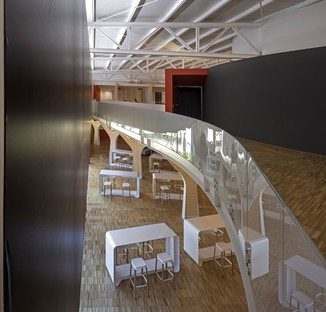 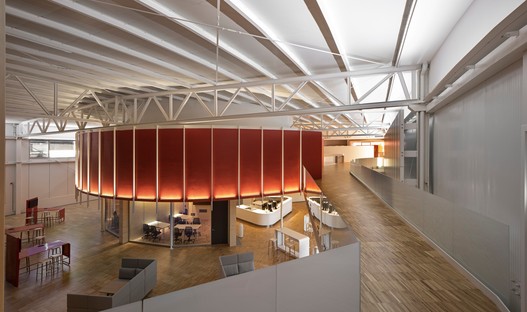 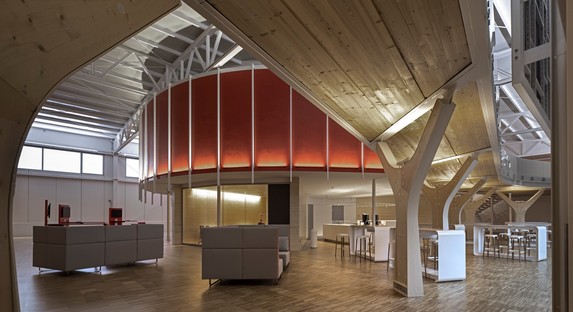 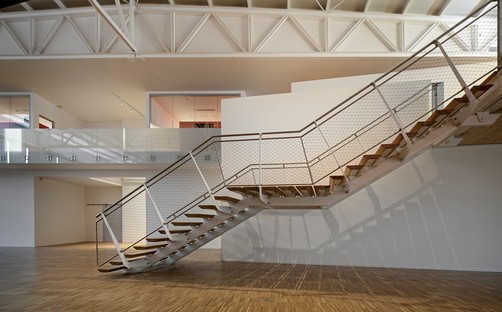 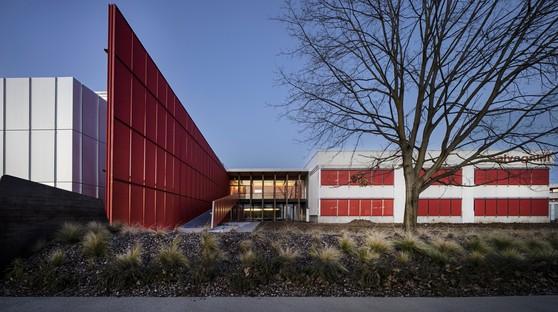 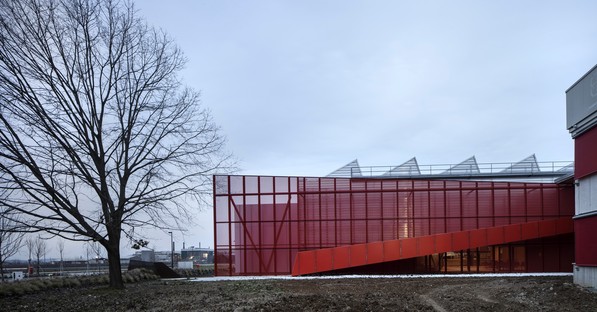 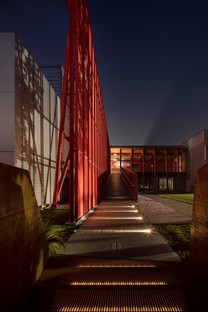 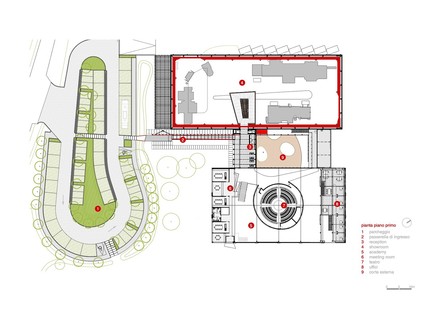 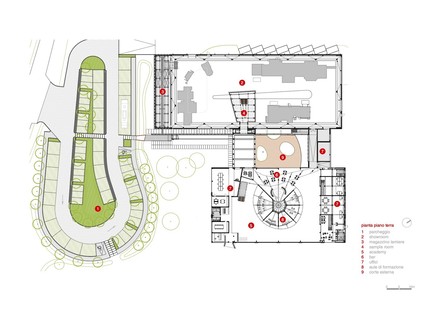 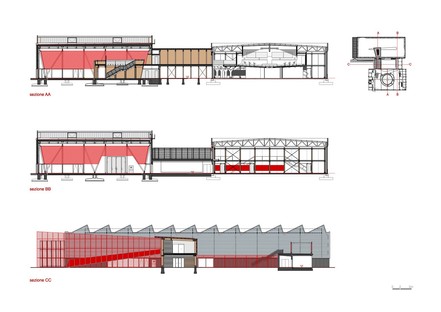 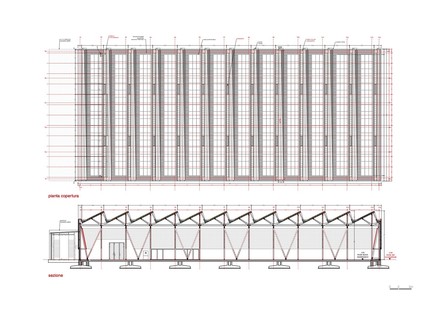 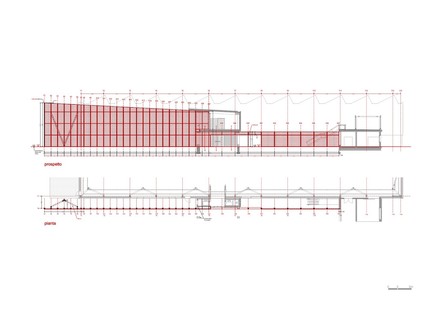 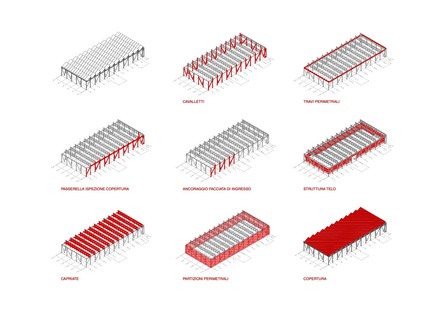 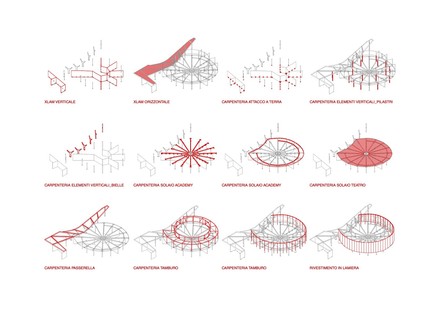 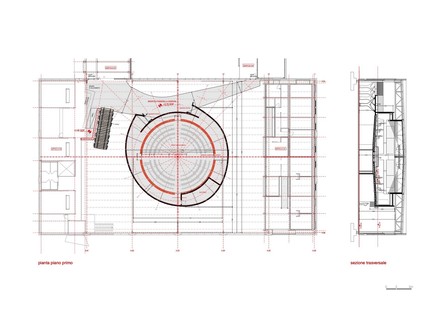