With Klotski, Graham Baba Architects has completed a three-floor, mixed-use building in Seattle’s Ballard district. The project is named after the sliding block puzzle and combines an eye-catching look that plays on geometries, with plenty of attention to sustainability. 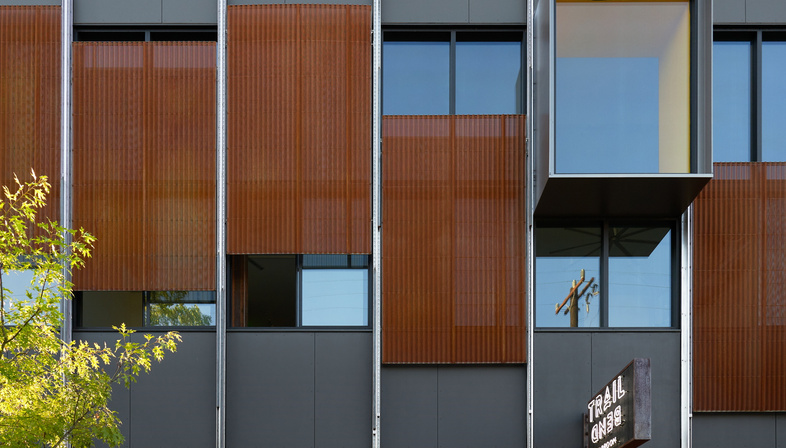 The neighbourhood of Ballard - until 1907 a city just outside the Seattle boundaries - is now known for its dynamic mix of commercial, manufacturing, and residential uses. The landmark Ballard Avenue on the waterfront is overflowing with trendy restaurants, creative boutiques, bars, and a growing number of craft breweries. A buzzing atmosphere that the team from Graham Baba Architects have captured in Klotski, a three-storey, mixed-use building.
Tapping into the vibrancy and gritty nature of the neighbourhood, the 933-square-metre steel and concrete block structure houses a beer hall on the ground floor, an office, a maker space, a studio, and a small caretaker’s apartment.
It’s called Klotski, which comes from the Polish klocki—wooden blocks, referring to a sliding block puzzle thought to have originated in the early 20th century. The aim of the puzzle is to move a specific block to some predefined location.
Riffing on the idea of shifting uses and planes, the design by Graham Baba Architects takes its visual cue from that puzzle, expressed on the south-facing exterior of the building through the use of 7’x10’ perforated metal screens. The screens slide up and down, allowing occupants to modulate their levels of shade and privacy, and to respond to seasonal variations in daylight.
At street level, the building is set back from the property line by a couple of metres to provide space for al fresco dining. The 158-square-metre Trailbend Taproom, whose interior design is also by Graham Baba, takes its name from the nearby Burke-Gilman Trail, the conversion of a disused railway track into a multi-use recreational trail, which bends as it passes through Ballard. A glass wall and sliding doors enable the taproom to connect to the streetscape.
Inside the building, rooms feature exposed steel and structural elements, complementing the concrete flooring and wood decking. An open floor plan and five-metre-high ceilings create a loft-like industrial aesthetic for the office housed within. Conceived as a maker space studio, a self-contained mezzanine accessed via stairwells and elevator floats within the second-floor volume. A studio and caretaker’s unit occupy the top level. Generous roof decks and an interior courtyard round out the spaces, ensuring ample indoor-outdoor opportunities.
The sustainable features of Klotski include rainwater cisterns that collect and recycle all on-site rainwater, roof-top solar panels, energy-efficient radiant heating, thermally efficient, operable windows on the north and south sides of the building to encourage cross ventilation, and operable sunshades—the screens that gave the project its name—on the exterior. The modest size of the lot—399-square-metres—meant that every square centimetre of space was organized as efficiently as possible to maximize usable areas. This adds another sustainable aspect to the iconic building designed by Graham Baba. 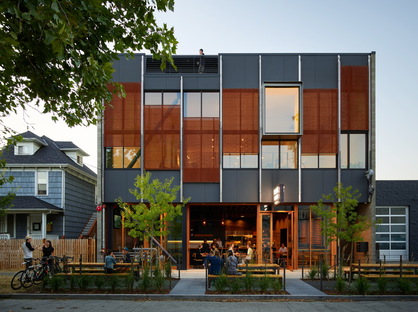 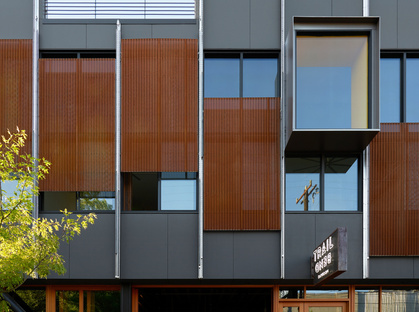 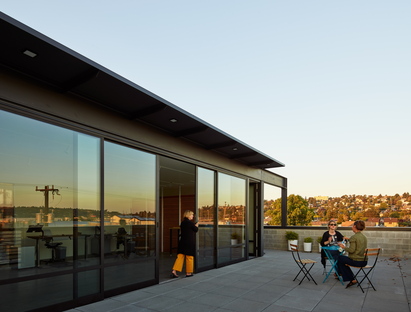 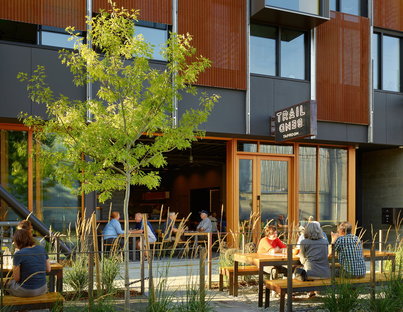 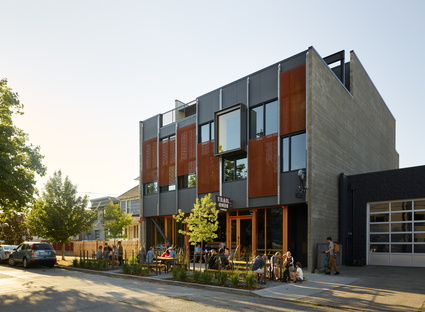 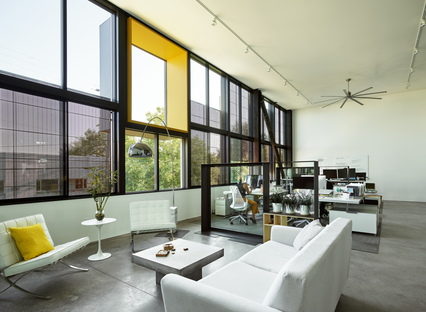 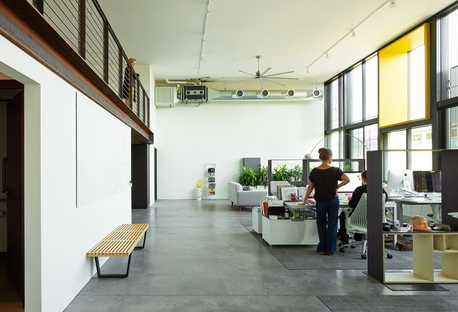 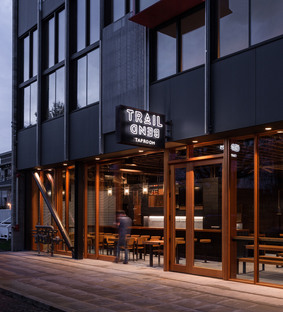