Rotterdam architectural studio MVRDV has completed the Bulgari flagship store in Shanghai, a new boutique showcasing the circular economy with a green, jade-like façade made from brass and recycled glass bottles, referencing the original Bulgari boutique in Rome and Shanghai’s Art Deco architecture. 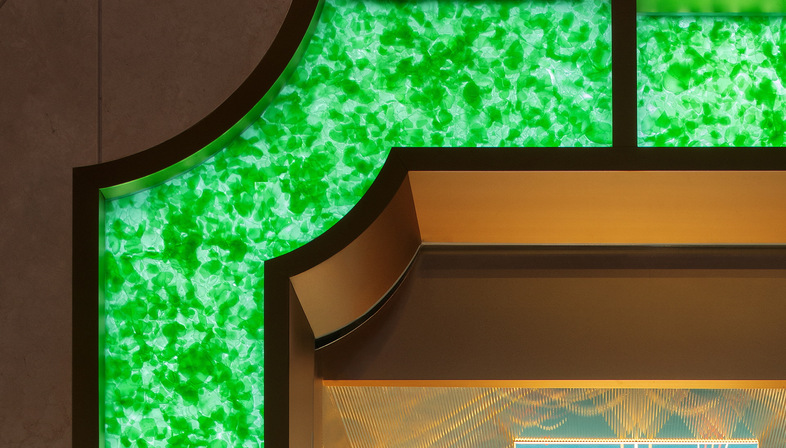 The true luxury of the third millennium is a project that is intrinsically sustainable and demonstrates the compatibility of the circular economy with beauty. This is perfectly clear in the latest new project by Dutch architectural studio MVRDV for Bulgari. This is studio co-founder Jacob van Rijs’ third project for the historic Roman fashion house.
The first flagship store opened in Kuala Lumpur in 2018, with a façade inspired by marble lit up with veins of golden light created using glass-reinforced concrete, followed by Bulgari Bangkok in 2020, in which a cornice motif made of brass was combined with different types of glass to create a jewelled effect. For the new Bulgari flagship store in Shanghai Plaza 66 on Nanjing Road, one of the biggest and most popular shopping centres in Shanghai, the architects propose a green, jade-like façade made of brass and recycled glass obtained from champagne, beer and other glass bottles.
Like the two previous projects, the Shanghai project makes use of a visual motif inspired by the portals and cornices of the original Bulgari boutique in Via dei Condotti, Rome, adopting the highly recognisable visual identity that now distinguishes Bulgari boutiques all over the world. This time, the idea is to mirror not only the identity of the maison, but that of the city of Shanghai itself. In the façade facing onto Nanjing Road, which has practically no windows, the cornice motif is translated into stratified panels forming a motif inspired by Art Déco, a theme shared by both Shanghai and Bulgari: the Chinese city’s status as a port linking east and west at the turn of the twentieth century has given it a rich heritage of Art Deco buildings, in the same style as Bulgari jewellery of the time, such as the Déco collection.
This link with local tradition is translated with the attraction of jade, China’s most precious stone, producing a stratification of intercultural references with a heart of research and technological innovation, because the panels, with their gilded brass finishes giving the façade the look of jade jewellery, are made of sintered green glass to create a unique material effect with a translucent finish. By night, energy-efficient back-lighting gives the façade a surprising gleam, underlining the unique structural quality of glass. All the glass is recycled, produced by the Magna factory in Teutschenthal, Germany, which specialises in glass treatment.
The Bulgari flagship store in Shanghai demonstrates that sustainable recycled materials can even have potential for use in a luxury context, marking a big step toward MVRDV and Bulgari’s shared goal of designing shops made out of 100% materials from the circular economy. As Jacob van Rijs says: ”Our collaboration with Bulgari has produced some fascinating material experiments. It’s a passion we share with them, albeit in different design disciplines. The Shanghai store encapsulates the value of these experiments: given the right treatment and detailing, leftover champagne and beer bottles, which would otherwise be thrown away, become a jewel for the city.” 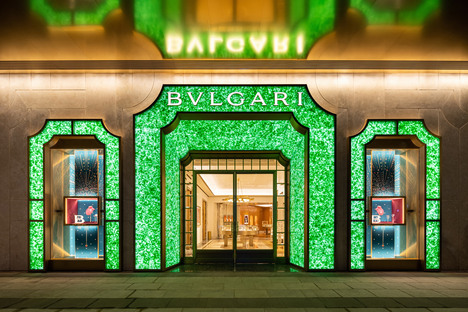 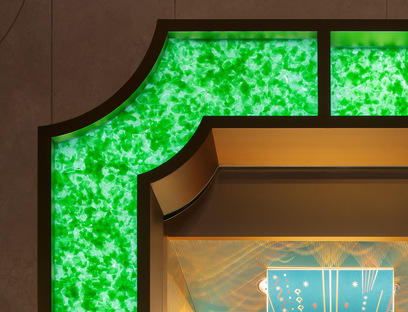 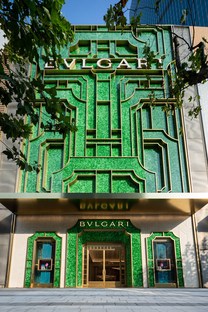 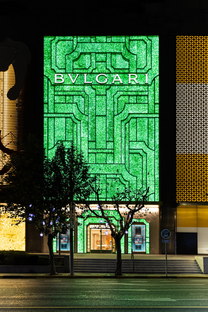 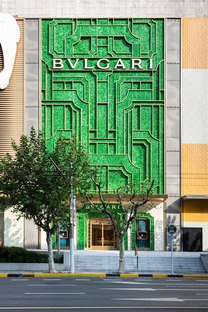 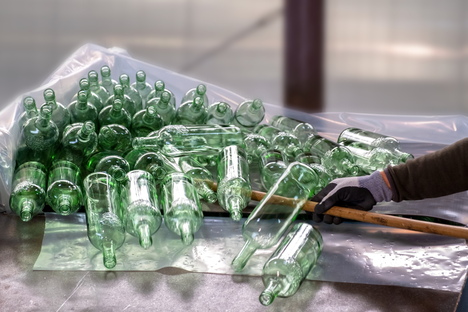 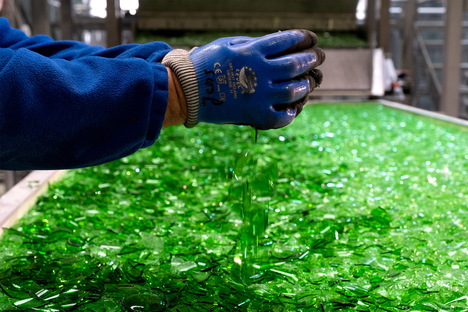 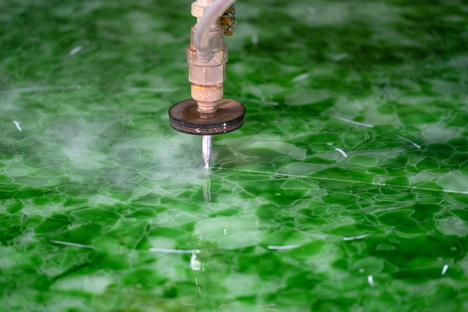