Two different projects by DiDeA in Palermo address the issue of construction in an existing building, converting two small venues in the historic centre of the Sicilian town into a cosy osteria and a gourmet hamburger restaurant. 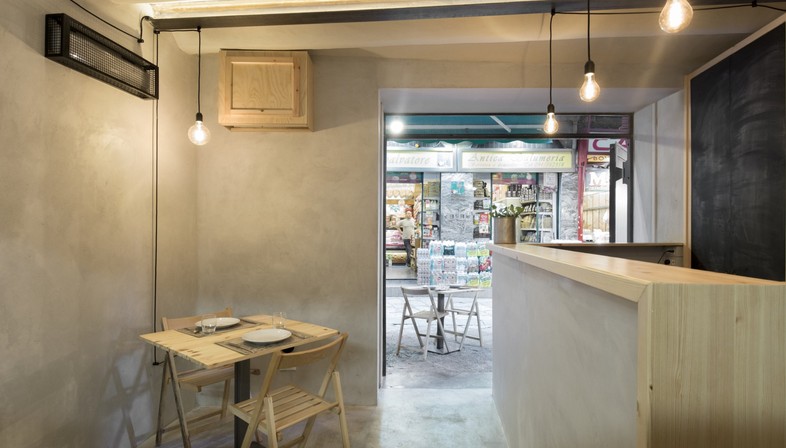 Architects Nicola Giuseppe Andò, Emanuela di Gaetano, Alfonso Riccio and Giuseppe De Lisi of DiDeA have repeatedly addressed the problem of working in an existing building, bringing new life and new purpose to spaces designed for different uses by converting them into restaurants. Successful examples include Unto, now a street food restaurant but originally a long, narrow antiques shop, and “Ai Giudici”, a coffee shop and lounge bar created by converting a small 50 square metre space, in the centre of Palermo. In Milan’s Porta Romana district, a former tailor’s workshop has become Muddica, a bistro serving Sicilian gastronomic specialties, where space is organised vertically, allocating the upper part to product display and the lower part to food and wine service. The Sicilian city where the architectural studio is based is also the scene of two more new projects by DiDeA: Tritalo, a gourmet hamburger restaurant, and Osteria Dadalìa in Palermo’s famous Vucciria market. Each of these projects is designed with great care and is the product of attentive analysis of its urban and historical context. They are apparently simple solutions which are, however, never banal, concealing thorough and passionate study, a simplification that is a synthesis of symbolism and thought. Dadalìa is an osteria created in the heart of Palermo’s historic city centre by renovating an old shop on the ground floor of a building dating back to 1850 in the famous Vucciria market. The space the architects had at their disposal had a trapezoidal floor plan with three entrances, all at street level. The request was to create an informal restaurant open to the outdoors, an old-fashioned “osteria” where diners could enjoy traditional local dishes prepared in full view of customers. The architects decided to make the colourful, lively market the focus of attention. On the architectural level, the choice translated into definition of a neutral space open onto the street with simple furniture recalling the temporary containers typical of market stalls. The space is divided into two sections, a front part for customers with a bar corner and tables, while the back of the space contains technical and utility areas (the kitchen, private rooms and toilets). The two are separated by a Swedish pine and reinforced glass structure. Suspension lamps recall those used in markets in the past, while led lighting illuminates the barrel vaults which were uncovered during the renovation. 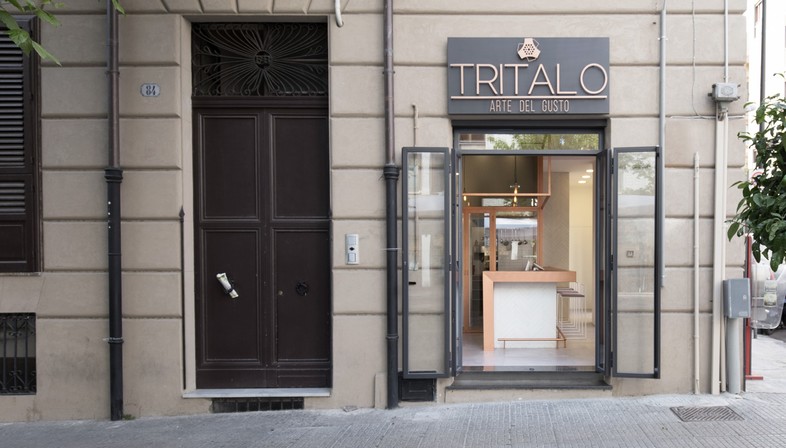 Tritalo is a gourmet hamburger restaurant made by converting a former boutique in central Palermo, a very small restaurant which measures only 38 square metres in a long, thin space.
The discovery of two vaults with 19th century frescoes during the demolition work added a special touch and gave the project great character, as the architects promptly rendered the frescoes visible.
The small amount of available space, very narrow with high ceilings, determined the concentration in a single space of all the services, from the bar counter to the kitchen and public and private toilets, adding a sense of unity to the space with colours and materials that underline the restaurant’s elegant minimalism. 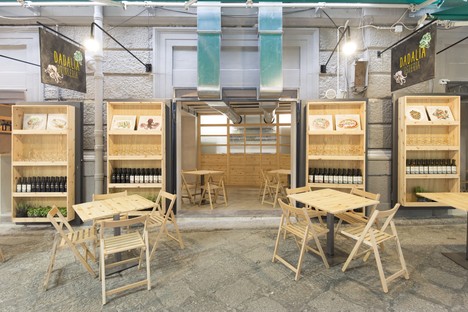 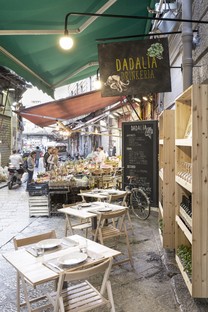 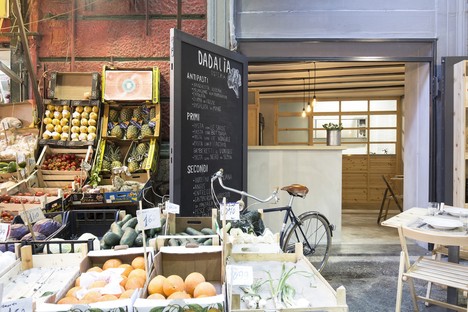 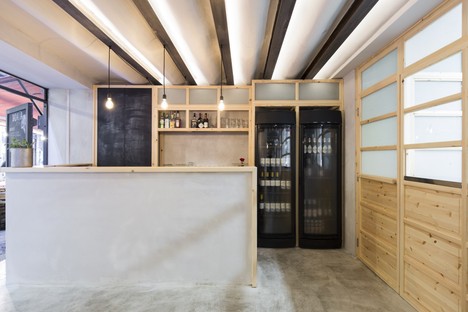 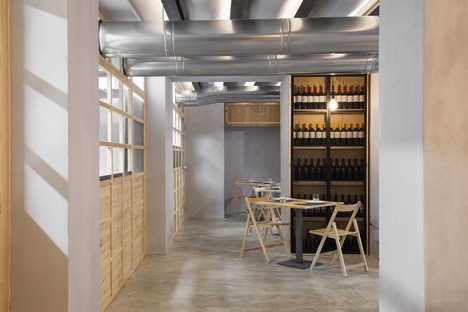 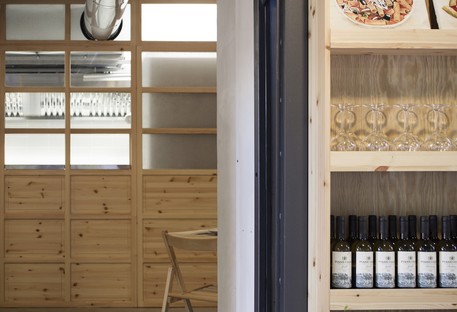 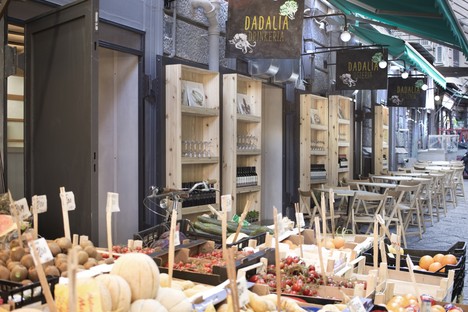 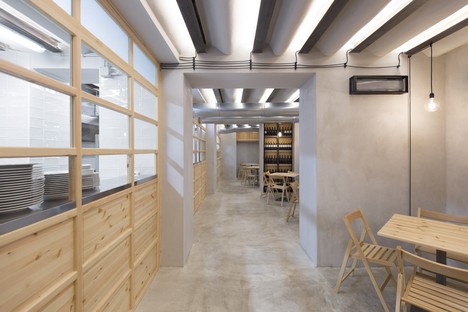 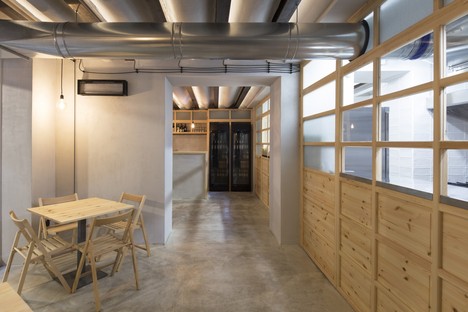 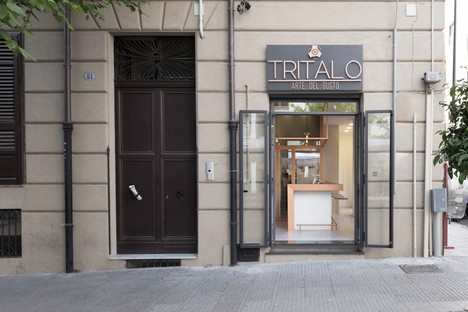 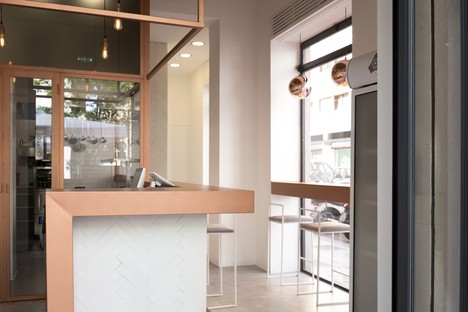 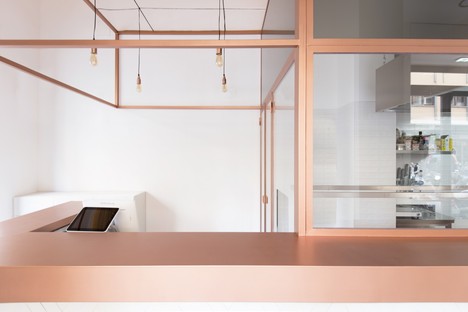 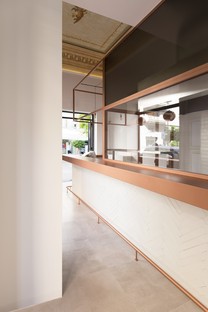 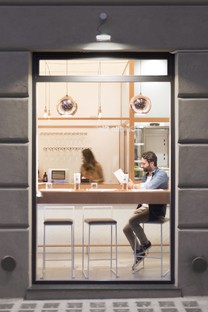 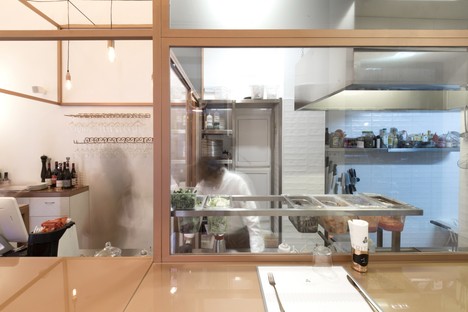 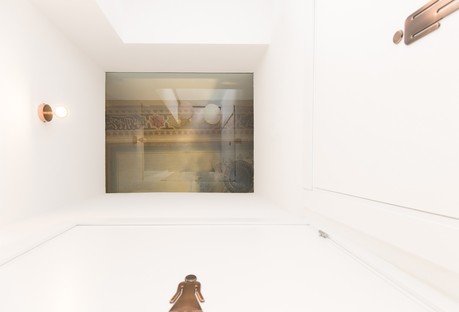 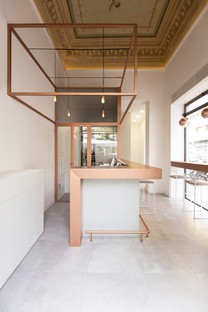 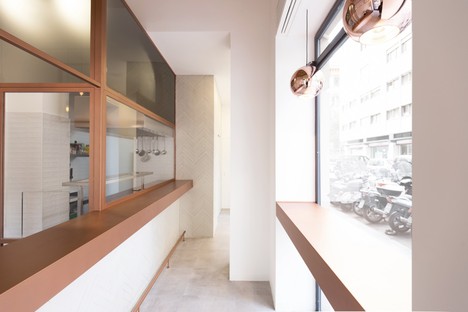