The new ECB headquarters in Frankfurt, designed by COOP HIMMELB(L)AU, are featured in a series of documentaries on skyscrapers produced by Joachim Haupt and Sabine Pollmaier, aired recently on the German TV channel 3sat. 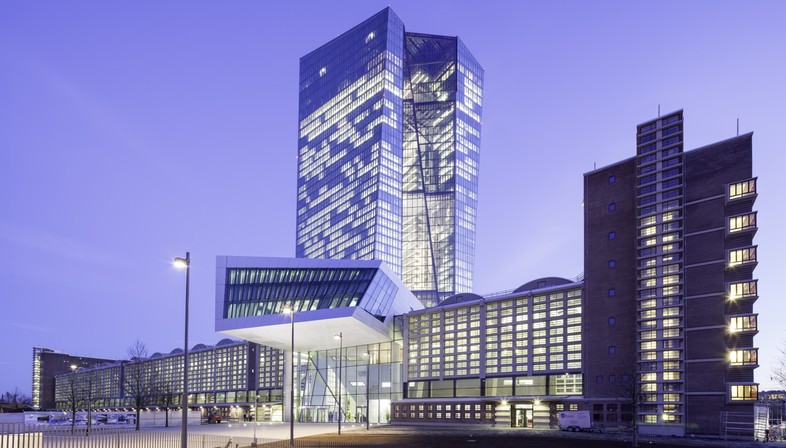 The German TV channel 3sat recently aired a series of documentaries by Joachim Haupt and Sabine Pollmaier about skyscrapers: Faszination Wolkenkratzer / Up to the sky. The buildings chosen by the directors are: the Bosco Verticale in Milan, designed by Stefano Boeri, The Shard in London, by RPBW, the Pinnacle@Duxton in Singapore, by Belinda Huang and Peng Beng Khoo, and the ECB seat in Frankfurt by COOP HIMMELB(L)AU, where the story begins. 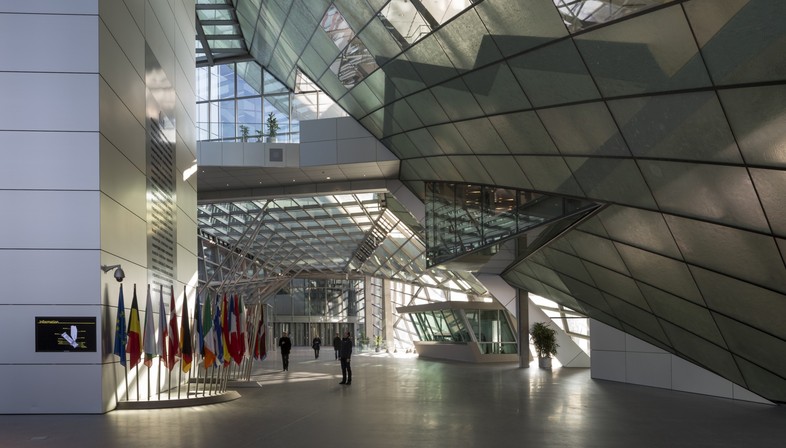 The dynamic, fluid shapes of the Central European Bank Building, opened in 2015 and designed by COOP HIMMELB(L)AU, dominate the skyline in Frankfurt’s Ostend district and incorporate the horizontal volume of the Grossmarkthalle. Constructed in 1926-1928, the building has been completely renovated to provide a number of the ECB’s public and semi-public functions (entrance and exhibition areas, café, visitors’ centre, employees’ cafeteria and conference hall) integrated into the hall as self-standing architectural elements. Thus the historic seat of Frankfurt’s wholesale market becomes one of the three essential architectural elements making up the complex that is home to the ECB. The main entrance on Sonnemannstrasse consists of an access building which creates a visual link between the other two elements in the complex: the Grossmarkthalle and the vertical building. The skyscraper looks like a single block divided by a vertical cut, but it actually consists of twin towers, one 185 m high (201 m including its antenna) and another 165 m high. The space between the two towers is a glassed-in foyer with an exchange platform and bridges, forming an ideal vertical city with its own streets and squares and making the building an unusual skyscraper. 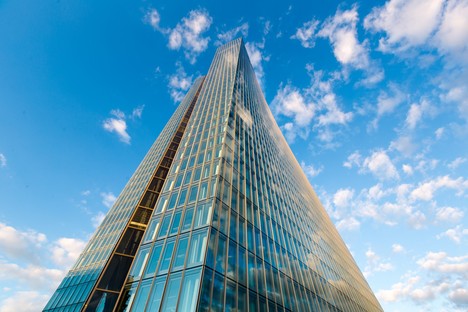 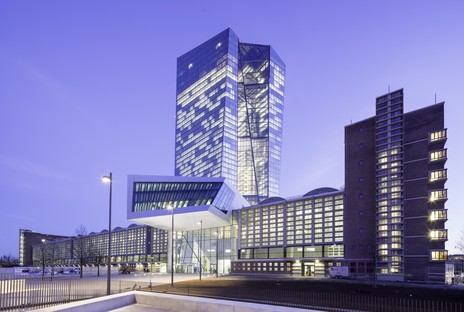 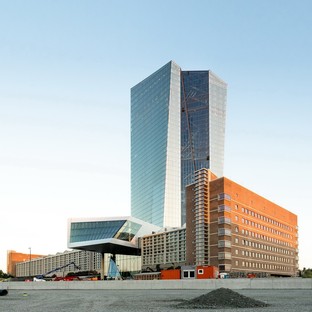 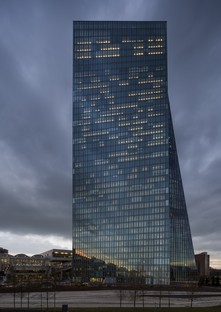 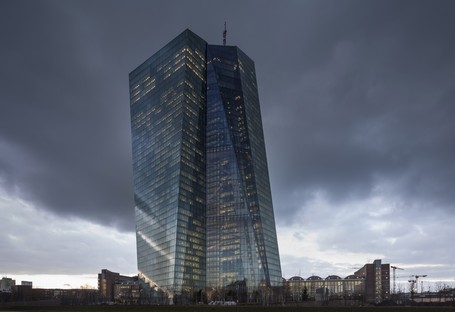 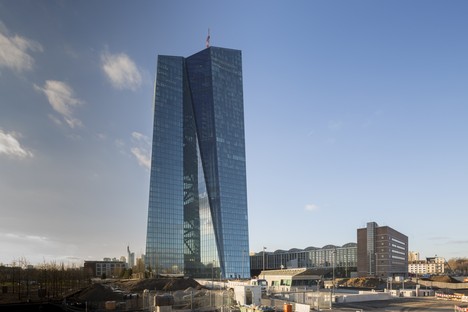 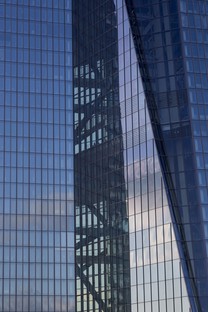 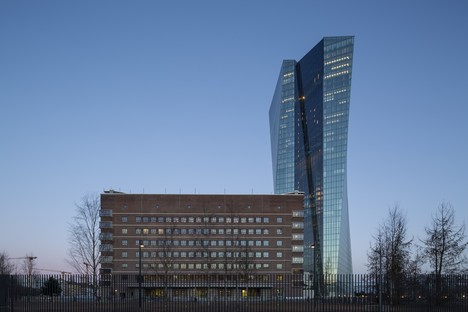 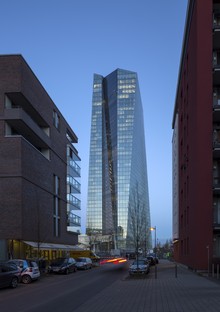 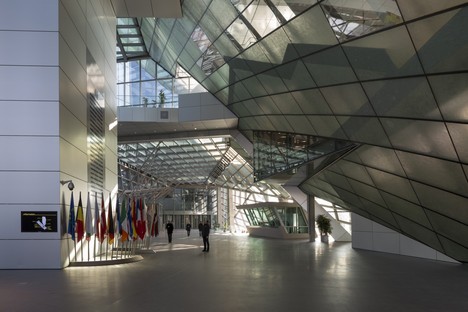 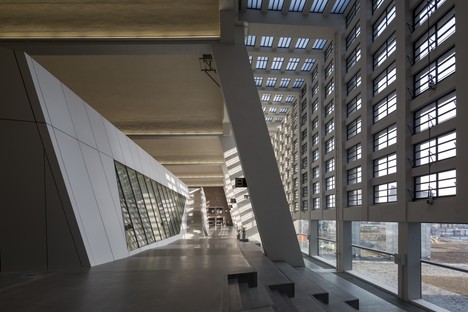 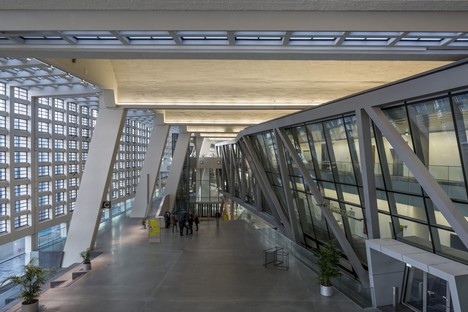 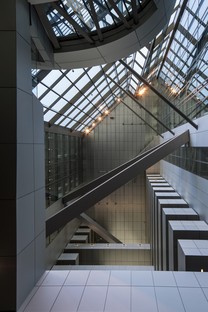 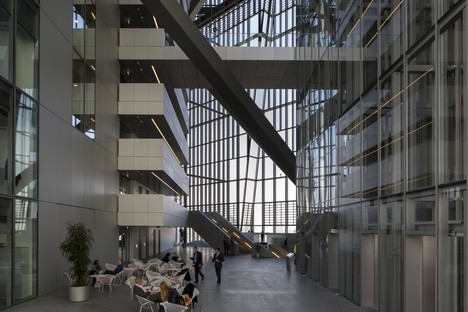 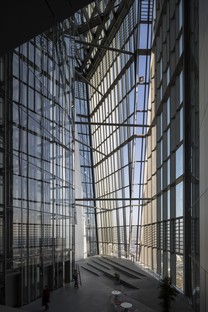