The Rockwell Group designed Moxy East Village Hotel for the Marriott International Group, a project celebrating one of New York’s most characteristic neighbourhoods. The hotel is designed to be a vertical timeline representing the district’s past, present and future. Italian artist Eduardo Tresoldi created the wire mesh sculpture Fillmore specifically for the hotel’s Cathédrale restaurant. 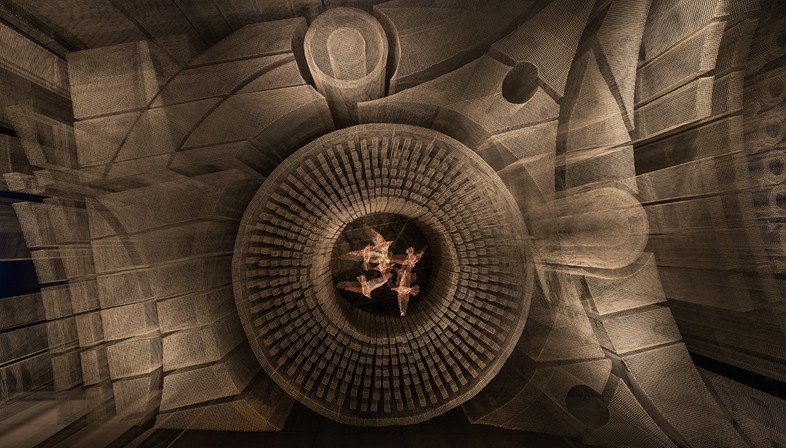 The autumn of 2019 saw the inauguration of New York’s Moxy East Village Hotel, a Rockwell Group project for the Marriott International Group. The hotel is a celebration of the East Village, one of Manhattan’s most characteristic neighbourhoods, a lively centre of rebellious American counterculture. From the city’s rock’n’roll culture to art as a form of rebellion, from LGBTQ+ activism to punk culture and multicultural society: the Rockwell Group’s project is inspired by everything that is a part of the history of the East Village. The architects drew their inspiration from industrial archaeology in the design of the hotel structure, creating a vertical timeline in which each one of the hotel’s thirteen floors pays homage to a particular aspect of the past, present or future of the East Village, inviting guests to continue discovering the neighbourhood. With more than 286 designer rooms, co-working spaces and four new restaurants, in addition to bars and lounges, the hotel has become a celebration of the city of New York, of its role as an incubator of counterculture in the seventies and eighties and of the many different souls of each of the city’s neighbourhoods. The architects involved a number of artists in the project, including New York artist Michele Sanzone, who used reclaimed materials to make the three check-in desks in a hall that looks like a New York street, with graffiti on the walls and graphic signs inspired by the marks left when advertising posters are stripped away.
Fillmore is a new sculpture designed by Tresoldi Studio, a design studio drawing on the artistic experience of Edoardo Tresoldi, completed recently for the Cathédrale restaurant in Moxy East Village Hotel. 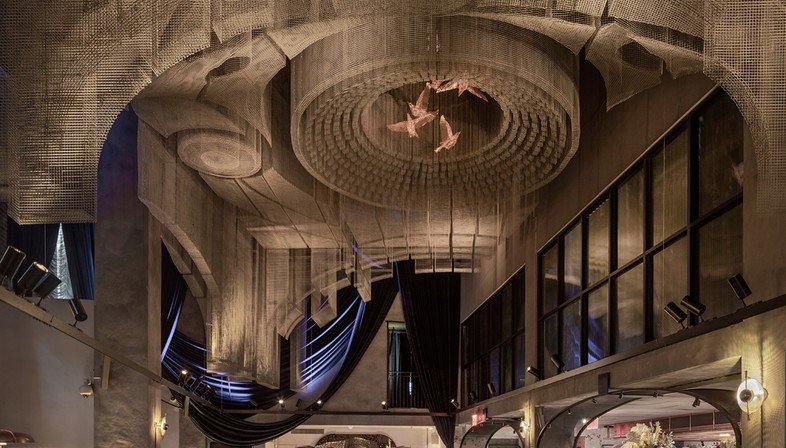 Moxy East Village Hotel has four large restaurants and bars: Cathédrale, Alphabet Bar & Café, Little Sister and a Rooftop Bar due to open in the Spring of 2020. Edoardo Tresoldi’s sculpture Fillmore was designed specifically for Cathédrale, the hotel’s most important restaurant, featuring French and Mediterranean cuisine and created in partnership with Chef Ralph Scamardella and Executive Chef Jason Sala on the hotel’s basement level, a space of dramatic dark design accessed via a fire escape staircase. The hall has high ceilings with vintage neon lights; in the middle of the main dining room hangs Fillmore, an ethereal wire mesh installation Edoardo Tresoldi designed to interact with the architectural structure around it. The Italian artist pays homage to American underground culture and draws inspiration from the structure of the Fillmore East, the famous Lower East Side concert hall open until the early seventies that hosted such legendary bands and musicians as the Doors, Janis Joplin and Frank Zappa. The installation looks like an architectural relic hanging from the ceiling of the hall, with a fragmented dome six metres deep in its central part. The play of solid and hollow volumes, visual distortions, contrasts and symphonies of elements recalling the past and industrial materials of Edoardo Tresoldi’s art helps give the restaurant a highly theatrical, dramatic flavour. 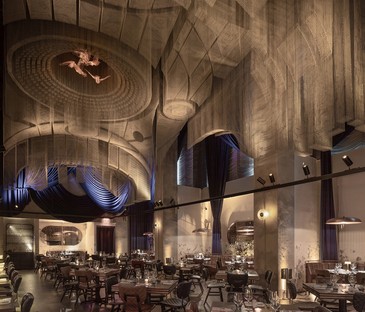 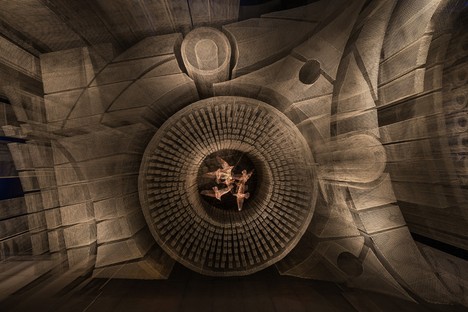 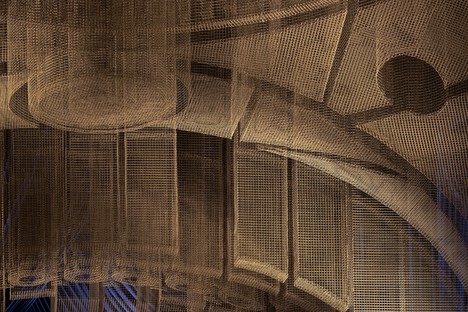 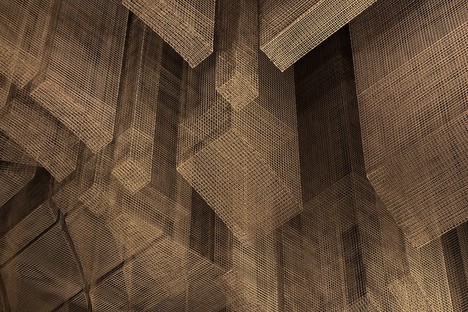 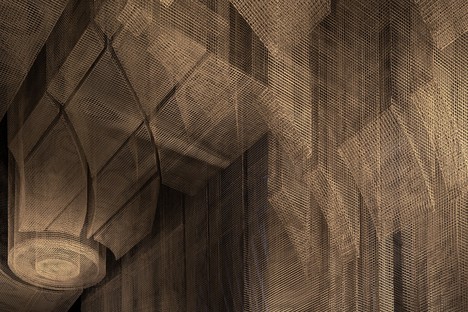 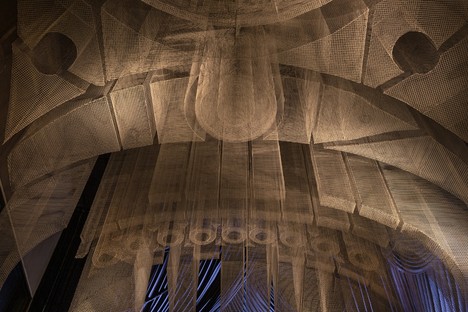 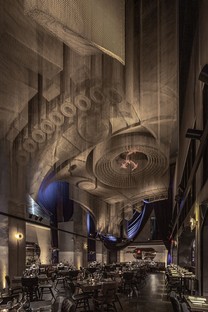 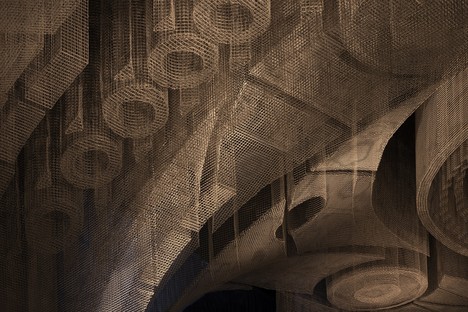 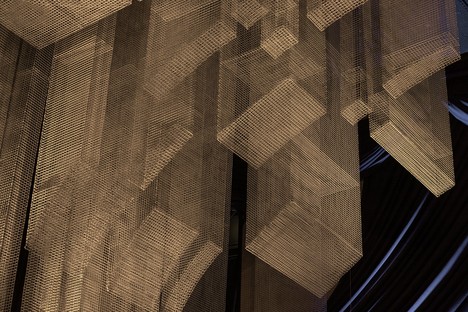 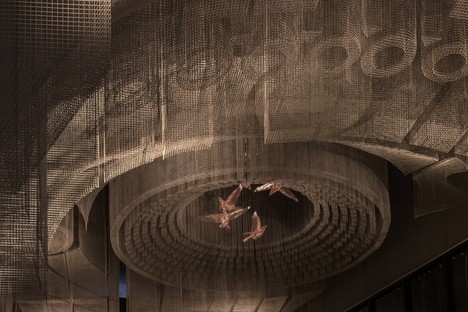 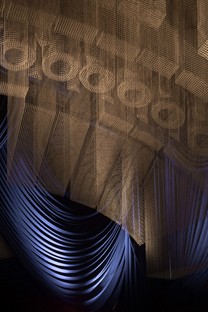 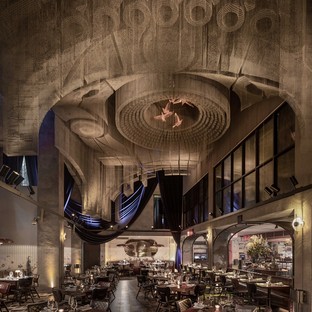