For its third store in Singapore, Apple has inaugurated a space that promises an unforgettable experience for its customers. A self-supporting domed structure made entirely of glass, which makes the store appear like a floating sphere on Marina Bay’s waters, a precious gemstone and a celebration of light. The project was designed by the Foster and Partners architectural firm in collaboration with Apple’s design team. 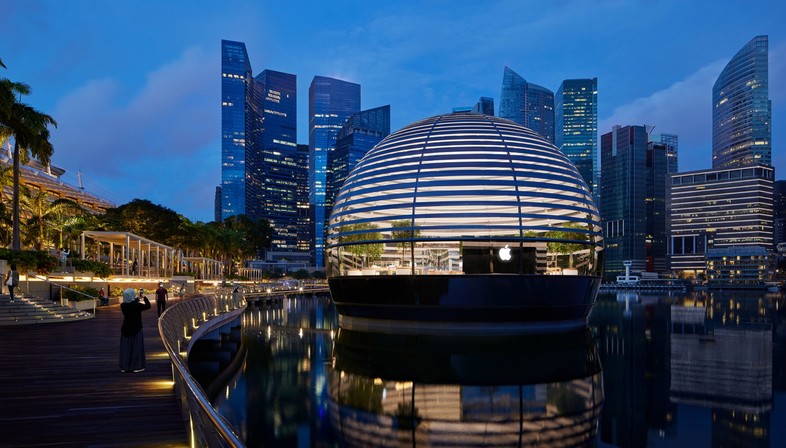 Apple is continuing its efforts to renovate and open new stores in leading cities around the world. Following the recent inaugurations of the new Apple Sanlitun store in Beijing and the Apple Central World in Bangkok, the Company based in Cupertino (California) completed a new ambitious project with the opening of its Singapore store that floats on the waters of Marina Bay. With the opening of this third store in the important Asian metropolis, Apple has inaugurated a space that promises an unforgettable experience for its customers. A self-supporting domed structure made entirely of glass, measuring 30 metres in diameter, which makes the store appear like a floating sphere on the waters of the Marina Bay. The project was created by the Foster and Partners architecture studio in collaboration with Apple’s design team.
Architect David Summerfield from the Foster + Partners firm described the Apple Marina Bay Sands as a delicate interplay between transparencies and shadows: “The structure dissolves the boundary between the inside and outside, creating a minimal platform that floats gently on the water, looking out over the bay and the spectacular Singapore skyline".
The distinctive quality of the store is indeed the ability to allow visitors to enjoy a sweeping panoramic view of the city, thanks to the domed structure which behaves like a hybrid shell of steel and glass. The steel grid consisting of slender posts and rings supports the weight of the glass. In turn, the 114 curved structural glass panels restrain the steel elements and stiffen the overall form of the dome against the lateral loads. The concentric rings increase in number in the upper part of the building, acting as a brise soleil and taking on an important sound absorption function. Reflecting and diffusing the daylight inside the dome they contribute to that play of transparencies and shadows described by architect David Summerfield, dematerialising the structure and the boundary between inside and outside. Moreover, ten trees are arranged along the internal perimeter of the store, which with the play of light and soft shadows created by their foliage help to add a sense of comfort to the spaces where visitors can relax, enjoying a fantastic view of the marina or simply appreciating the store’s calm atmosphere. At the top of the building a large oculus lets in a beam of light that travels through the store, creating a striking light effect and a direct reference to the famous Pantheon in Rome, archetype that clearly inspired the store’s design.

The relationship with light is a key element of the design. The store’s position on the water certainly contributes to this aspect with its reflection and refraction effects. Inside the store the different intensities and colours of light have a calming effect, in stark contrast to the hectic everyday life of a large metropolis like Singapore. An aspect also underlined by architect Stefan Behling from the Foster + Partners firm, who describes the store not only as a place for celebrating Apple products, but as a place where light is celebrated. During the day, the dome in fact reflects the colours of the water and of the sky, while in the evening the interior lighting transforms it into a luminous floating landmark on the Marina Bay waters, from which customers can enjoy spectacular new views of the Singapore skyline. 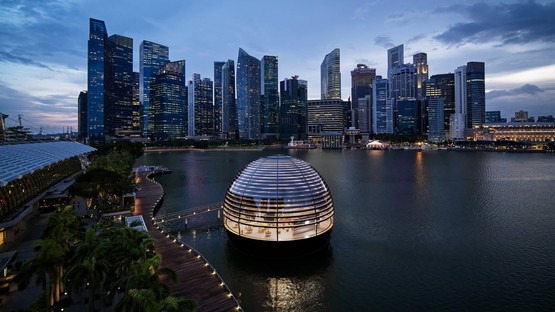 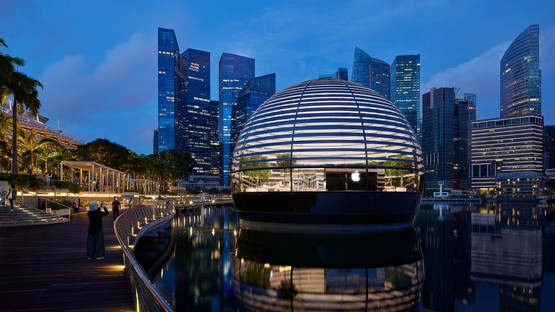 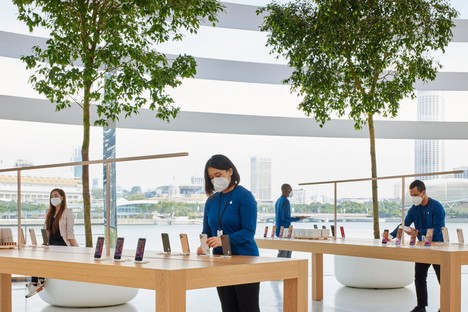 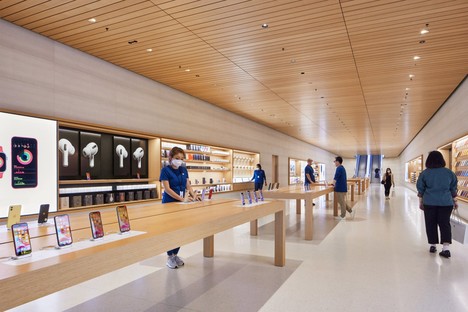 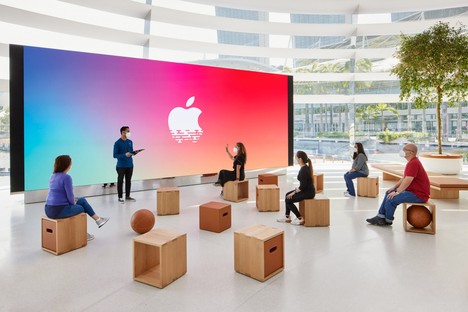 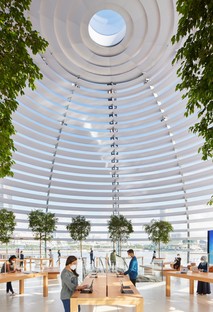