Laurian Ghinitoiu’s splendid photographs offer us a glimpse of the interiors of the ME Dubai, the hotel recently inaugurated in The Opus, a skyscraper in an unusual hollow cube shape designed by Zaha Hadid in 2007. The new hotel, a member of the Spanish Melia Hotels International chain, is the only hotel for which Zaha Hadid supplied not only the architecture but the interior design. 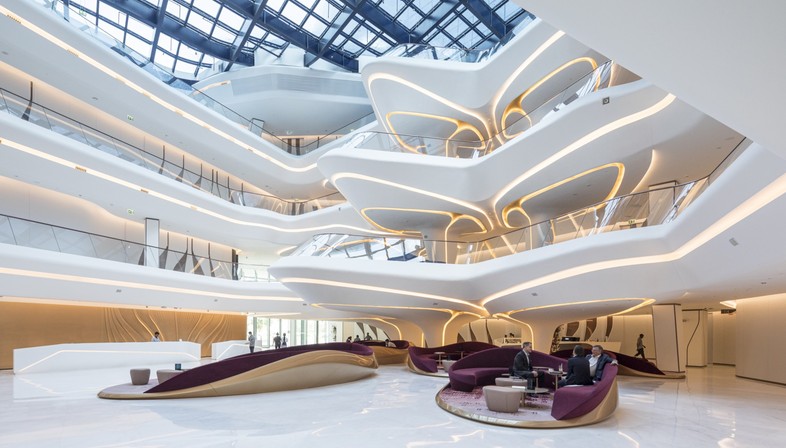 The new ME Dubai, a five-star hotel belonging to the Spanish Melia Hotels International chain opened recently in the same neighbourhood as the world’s tallest skyscraper, the famous Burj Khalifa, in Dubai. The hotel is located inside The Opus, a skyscraper in an unusual hollow cube shape designed by Zaha Hadid in 2007. The new hotel is now the only one in the world that can boast the work of the Anglo-Iraqi architect who passed away in 2016 in both the architecture and the interior design. The Opus skyscraper appears, in the most widely circulated photographs, as a glass cube with precise geometric right angles and a hollow space in its centre, eight floors high, surrounded by fluid surfaces. The photographs by Laurian Ghinitoiu reveal that the volume of The Opus actually consists of two separate towers standing on a common base, only partly joined in the upper levels via an asymmetricical bridge three floors high and 71 metres above the ground. But discovering the reality of its shape does not subtract anything from the "marvel" we experience at the sight of this unusual sculptural volume, in which the architect explores the balance between solid and hollow, opaque and transparent, inside and outside.
At ground level, the twin towers share a base four floors high containing a shared atrium. The building contains the ME Dubai Hotel, with 74 rooms and 19 suites, as well as offices, apartments, restaurants, coffee shops and bars, including the ROKA, a Japanese robatayaki restaurant, and The MAINE Land Brasserie. The interior of the Hotel ME Dubai features furnishings by Zaha Hadid Design, such as the sofas and chairs in the foyer, the beds and the furniture in the suites. Her designs interpret and continue the search for fluid lines that characterises all Zaha Hadid’s architecture inside the building. In the interior of The Opus, the ventilation and lighting systems are automatically controlled by sensors to cut energy consumption. And for guaranteed comfort and wellbeing, the façades of the cube consist of insulating double glazing with a protective coating to shelter from UV rays and a motif that reduces solar radiation inside. The façade of the hollow space is a 6,000 sqm surface designed with digital 3D modelling and built out of 4,300 flat glass elements, with single or double curves. Inside the glass panels are dynamic LED lights that may be individually controlled to determine the lighting of the hollow space at night. The façade solutions adopted not only ensure comfort inside the building but serve another important purpose, lightening our perception of the volume from the outside with continuous reflections and transparencies, as is clear in the splendid photographs of Laurian Ghinitoiu. 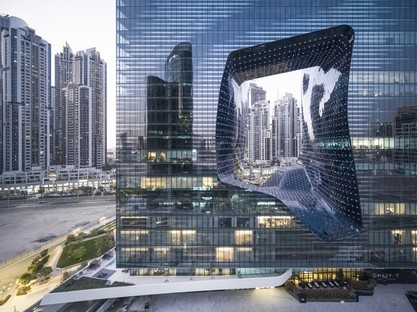 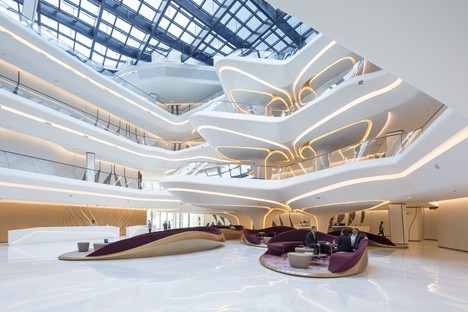 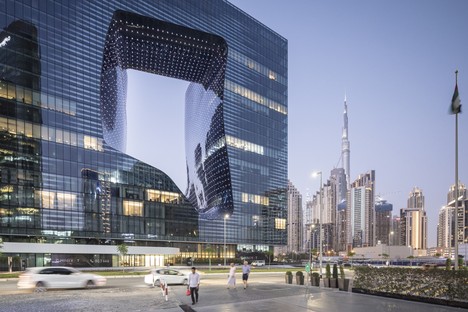 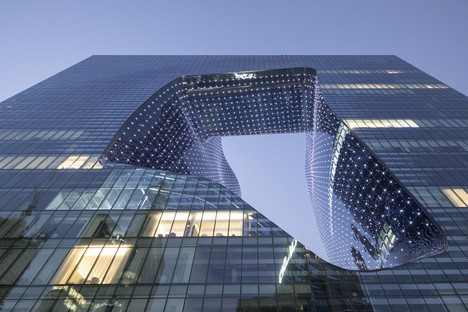 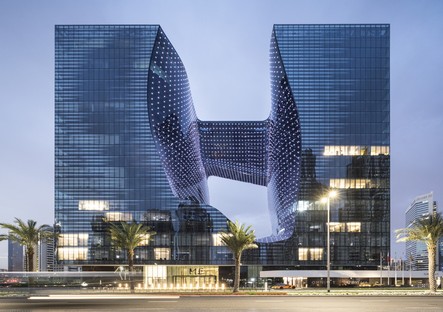 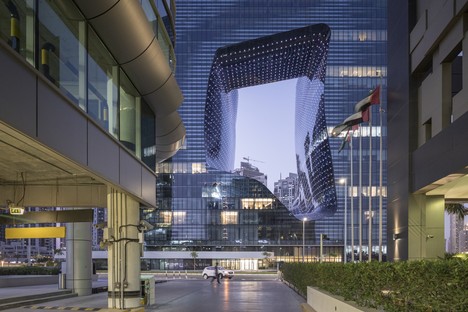 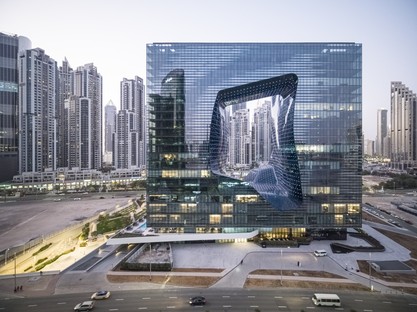 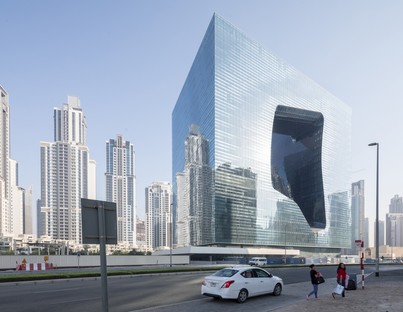 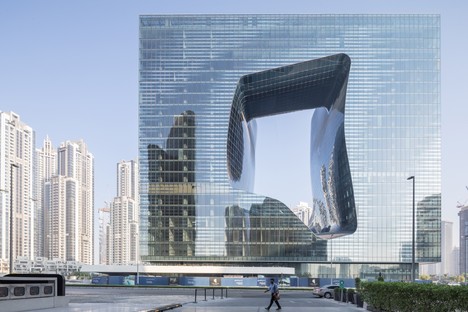 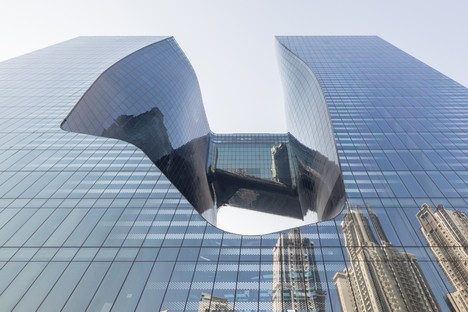 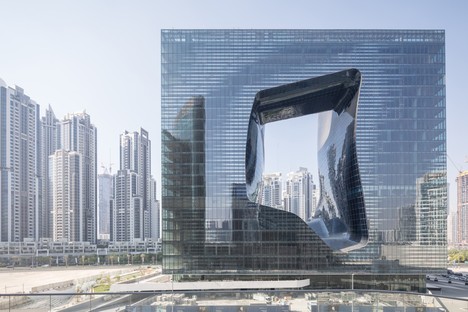 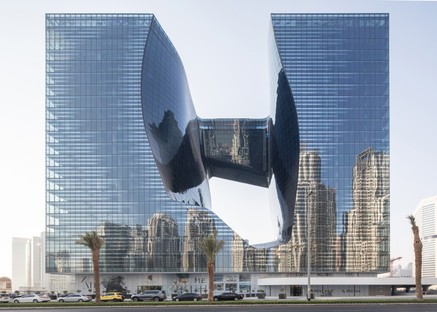 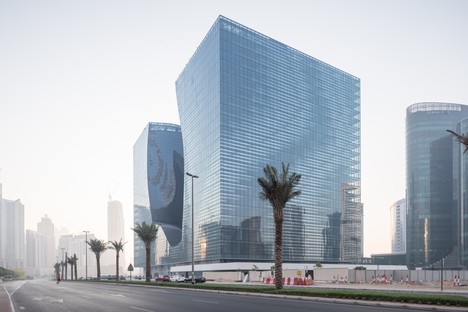 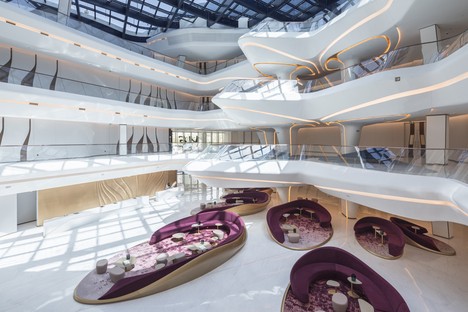 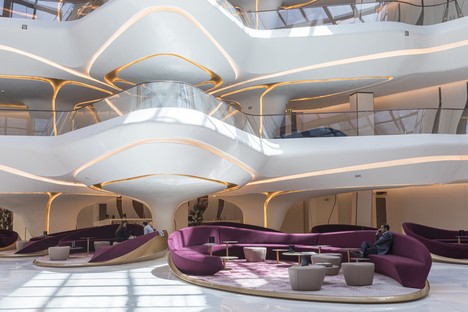 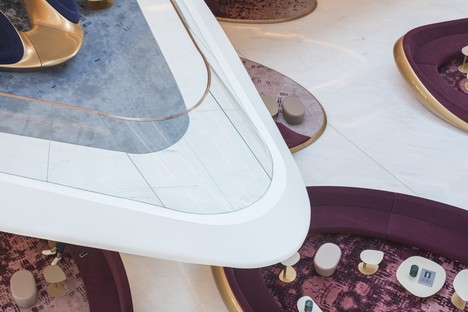 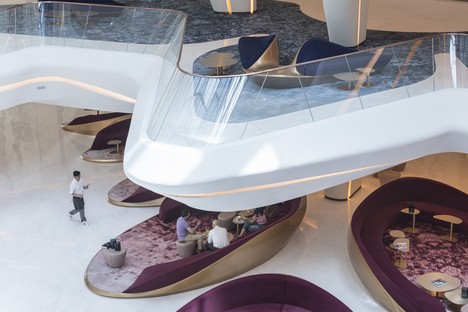 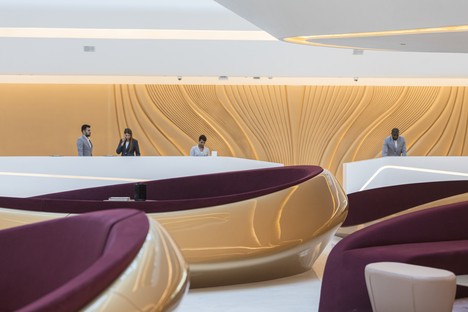 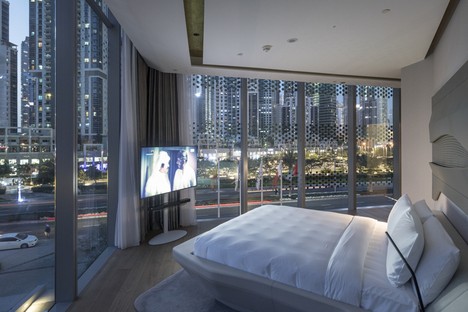 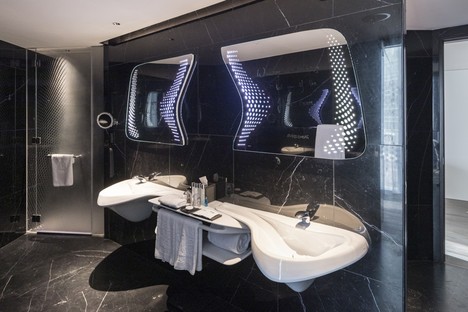