Living in Potsdam and respecting the historical context

Architect Ingo Andernach has built a single-family house in Potsdam near Berlin, Germany, which combines contemporary materials like concrete with full respect for the UNESCO World Heritage site of Potsdam's castles and parks. 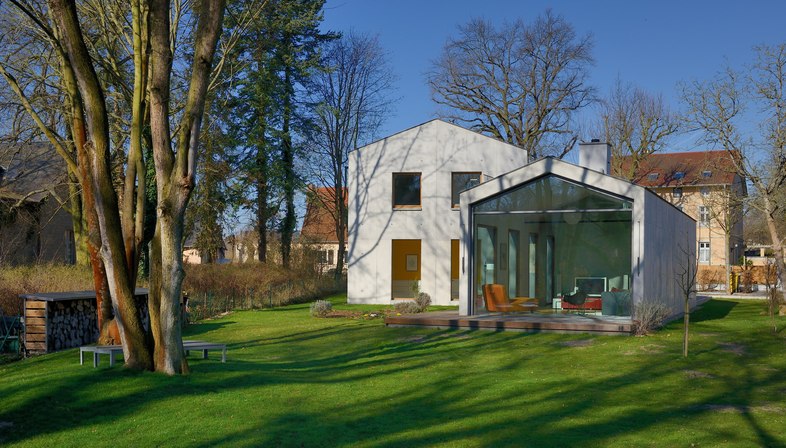 Architect Ingo Andernach has built a single-family house in Potsdam near Berlin, Germany, which combines contemporary materials like concrete with full respect for the UNESCO World Heritage site of Potsdam's castles and parks.


Combining the desire for a modern and contemporary home with the strict requirements of cultural heritage protection is a challenge for every designer. And it's even more complicated if the site is also a  UNESCO World Heritage Site and its layout doesn't facilitate projects.  In this case, we're talking about a single-family home designed by the architect Ingo Andernach within the cultural landscape that the architect Peter Joseph Lenné planned in the 19th century. This UNESCO World Heritage Site covers about 500 hectares and includes Sanssouci, Babelsberg, Lindstedt and Sacrow as well as the village of Bornstedt near Sanssouci Palace. Right where the Andernach-designed home stands. The architect opted for a two-part building made from pure exposed concrete, with a pitched roof and oiled oak wood accents. This connects the contemporary architecture with both the listed buildings and the other modern homes in Potsdam-Bornstedt.
The idea behind Ingo Andernach's approach was to craft a spatial and design concept to meet the client brief that would fit into the context and at the same time preserve its prevailing character, its genius loci. And, of course, all of this had to take into account building regulations with regard to the use of materials, as well as other restrictions such as visual orientation, volume sizes etc.
"The arrangement of the two buildings results in a semi-public outdoor area with courtyard and a private outdoor area facing south towards Lake Bornstedt. Despite the site's complex geometry, it was possible to integrate parking spaces on the ground floor of the two-storey building," says Andernach. The main, two-storey building with a double garage faces onto the street and accommodates the family and guest, two bathrooms, toilet, utility room and workroom; the single-storey annex contains the living and dining rooms and kitchen. The new building is crisp, sleek and compact, in keeping with the equally simple architecture of the surrounding historical buildings. In addition to the external load-bearing walls in exposed concrete, which is punctuated by the even pattern of the formwork, only oiled oak, anthracite-coloured concrete roof tiles and anthracite-coloured metal parts were used for the outer shell. Reinforced concrete pieces were used for the chimney heads. The same materials were also used for the site fencing, basing the proportions and arrangement on historical models. A glazed volume connects the two structures that sit on a concrete slab foundation.
A combination of optimum insulation and underfloor heating ensures positive environmental performance and there is provision to retrofit a heat pump, if necessary.
The interiors are dominated by architectural concrete too; the clients were very keen on using this as the material of choice for the walls, stairs and kitchen block. The impact of this is softened by the wooden accents on windows, doors and the parquet floor. Reaction to the new, two-volume exposed concrete house in Potsdam-Bornestedt has been mixed. Some locals and passers-by are enthusiastic, others wonder when the house will be plastered, says the owner, but all in all, it quickly turned into a positive reception. The occupants are extremely happy with the results, since the house is fully compliant with the uncommonly attractive historical context, without sacrificing its contemporary style. 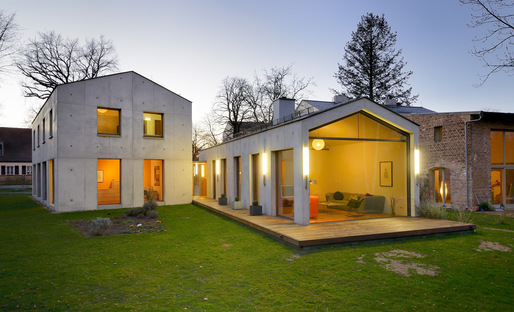 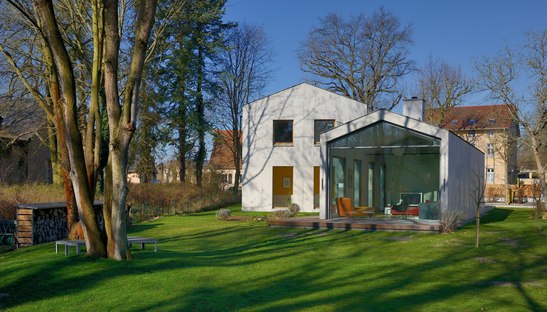 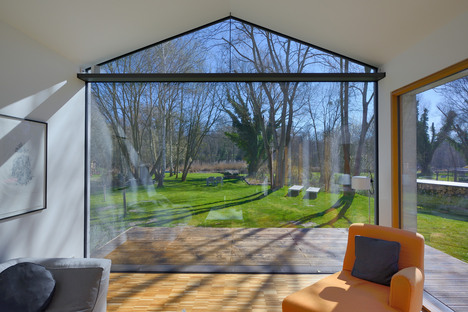 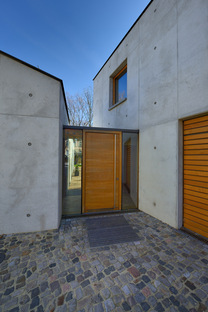 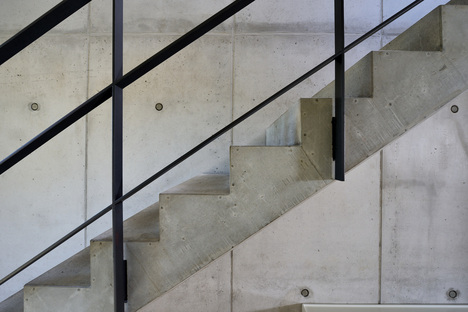 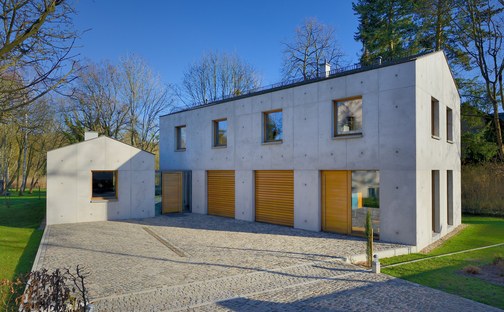 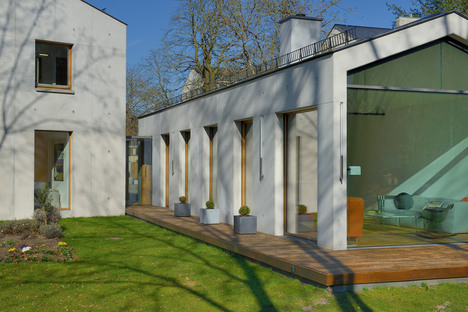 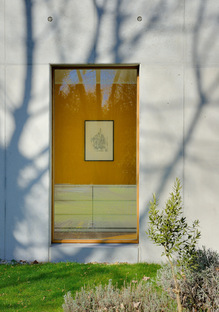