The town of Chiavari, on the eastern Riviera of the region of Liguria in northwest Italy, is home to a sustainable contemporary restoration of a public works project dating back to the nineteen-thirties. Architect Enrico Pinna planned the building’s rebirth for a group of five entrepreneurs, with a dozen local companies performing the redevelopment work, including a new waterfront promenade as well as restoration of the former Colonia Fara area. 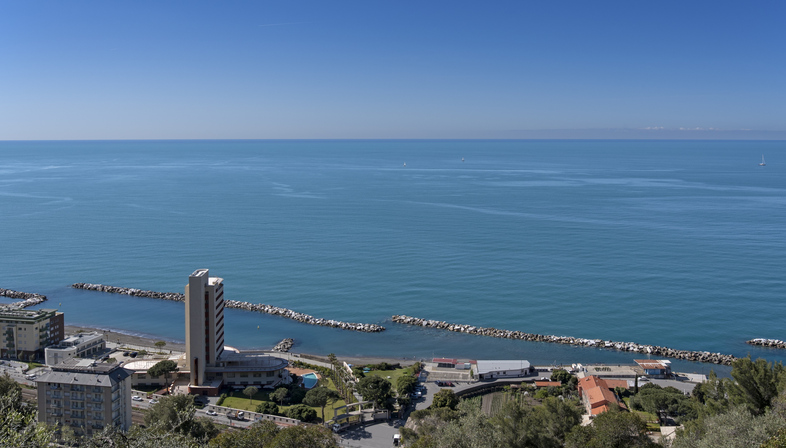 "A case study in reclamation of our modern architectural heritage” is the perfect description of the rebirth of the former Colonia Fara in Chiavari, Italy. The tower was built in the nineteen-thirties to plans by engineer Camillo Nardi Greco (1887-1968) in collaboration with architect Lorenzo Castello. Inaugurated in 1935, the building was originally a holiday camp for 400 children on the Tigullio Gulf, consisting of two volumes: a lower, horizontal volume totalling 1300 square metres, with a rounded vertical volume towering 49 metres above it.
After its brief service as a holiday camp, Torre Fara was renovated after the war for a variety of different uses, but despite its truly unique position with sea views extending from Portofino to Punta Manara, it had been abandoned since the nineteen-eighties.
It took years to achieve the result we may admire today, under the supervision of the Superintendency for Archaeology, Fine Arts and Landscape of the Region of Liguria, which oversaw the choice of colours, the restoration and the completion of the aeropaintings that ornamented the original structure. The renovation project has a long and troubled history, including a number of failed attempts to auction off the building, squatting, and repeated failure to form a group of enterprises to purchase the property, but it finally came to a happy ending when the city of Chiavari approved a proposal put forward by a private group of five entrepreneurs from the Tigullio Gulf area. The group invested almost 30 million euro in the project, with positive repercussions for the local economy, as all the work was performed by local enterprises, creating jobs and preferring materials sourced within the region. The work was performed to plans by architect Enrico Pinna of Pinna Viardo Architetti, a Genoese studio known for its reclamation projects on modern buildings, with architect Sonja Serventi and surveyor Alessio Gotelli of Chiavari.
The project represents a socially sustainable choice, going beyond restoration of the building with a plan for reclamation and renewal of the waterfront promenade on Via Preli, also by architect Enrico Pinna, creating a barrier-free walkway along the sea for the local population. While the work was still underway, Società Fara, the company set up to supervise the project, organised three events for local citizens, including the 2018 Le giornate futuriste alla Fara (Futurist Days at the Fara), to share their goals and their experiences on the construction site with the public; after all, the tower is a sort of urban totem for the people of Chiavari, “a lay cathedral and focus of attention”, as Enrico Pinna points out.
Redevelopment of the Colonia Fara has given this work of Futurist architecture a new lease on life. The ground floor and the first floor now contain the Grand Hotel Torre Fara, including a spa, restaurant and bar with outdoor seating in the garden. The building’s remaining nine floors contain 18 apartments, a maximum of two per floor, as required by the Superintendency.
Talking to the architects, to supervisor of works Alessio Gotelli and to site supervisor Enrico Basso, it is clear how much loving care went into the restoration project. Beginning with historical materials in their original locations, such as slate and travertine, the thick ‘cocciopesto’ finish on the façade, and down to original vintage furniture restored and supplied by Atelier Costa, or the new pergolas on the terraces, mediating between the building and the landscape in the best tradition of the Modernist movement. But this would not be a truly Futurist project without a focus on the future of the technical details: an essential choice for environmental sustainability, achieved by adding a geothermal system that makes Torre Fara a fossil fuel-free building, new generation home automation systems and insulation that does not affect its appearance, earning the building classification in energy class A: a rarity for a reclaimed 80-year-old Rationalist building, which can now be enjoyed in all its splendour, also in the shots taken by architecture photographer Gianluca Giordano. 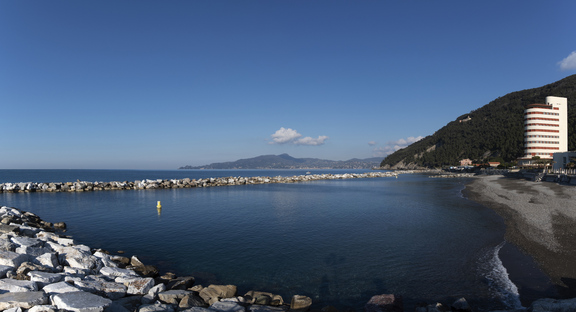 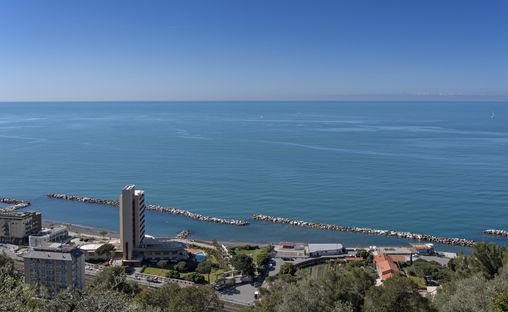 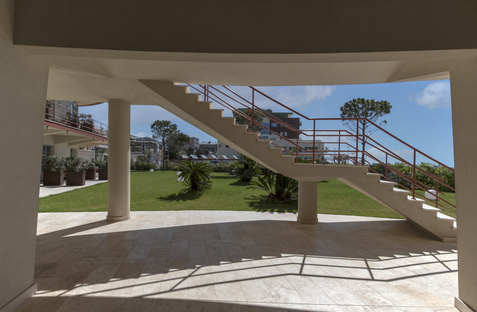 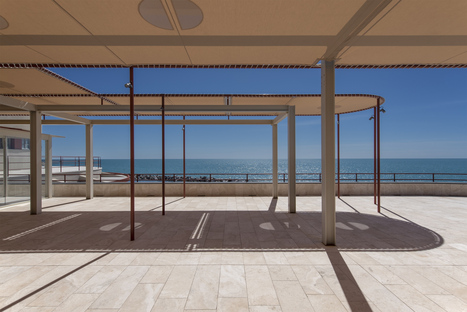 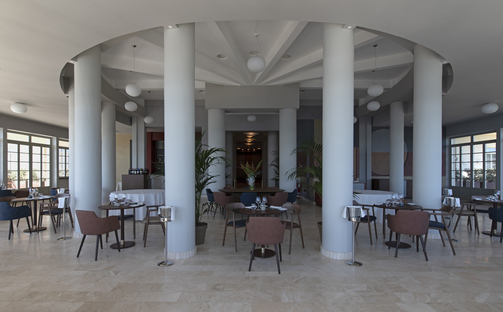 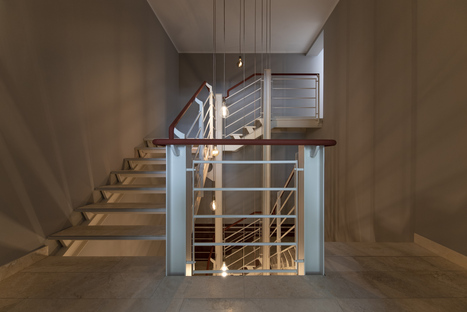 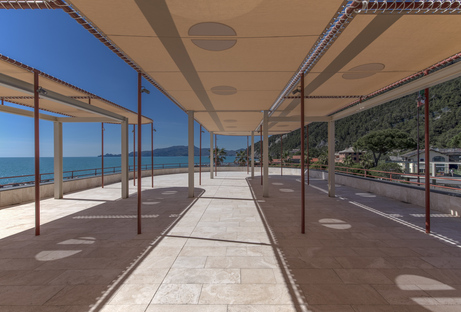 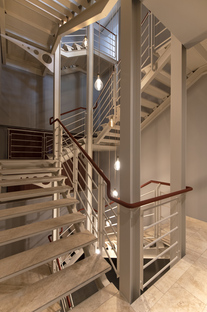 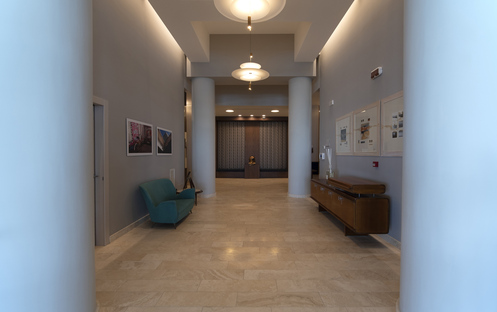 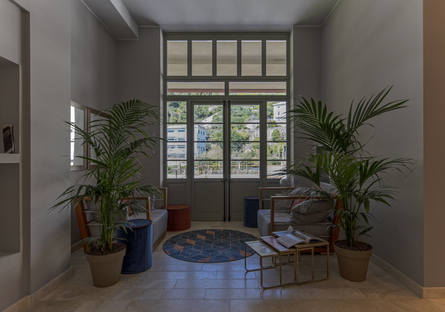 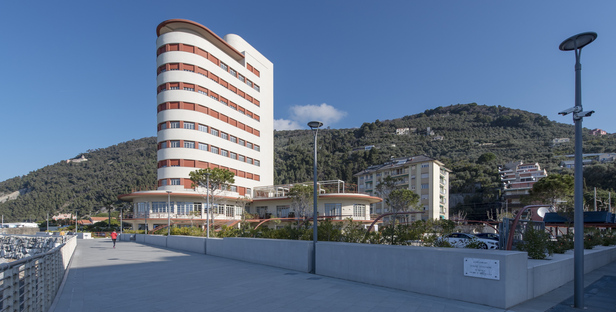 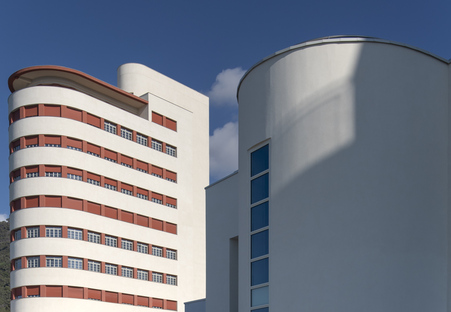 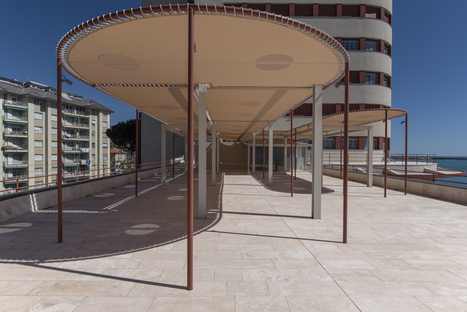 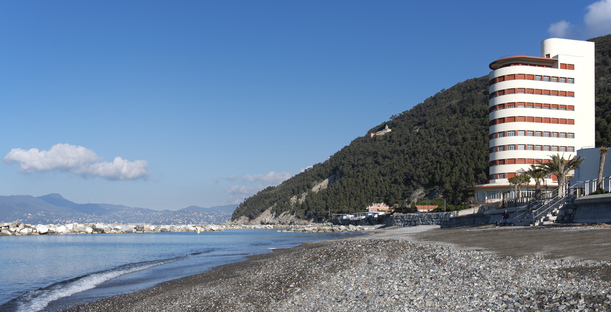