Thai design firm Hypothesis won this year’s INSIDE award in the bars and restaurants category announced at the INSIDE World Festival of Interiors in Singapore.

Thai design firm Hypothesis won this year’s INSIDE award in the bars and restaurants category announced at the INSIDE World Festival of Interiors in Singapore. Vivarium is the conversion of an old industrial warehouse into a truly green restaurant. 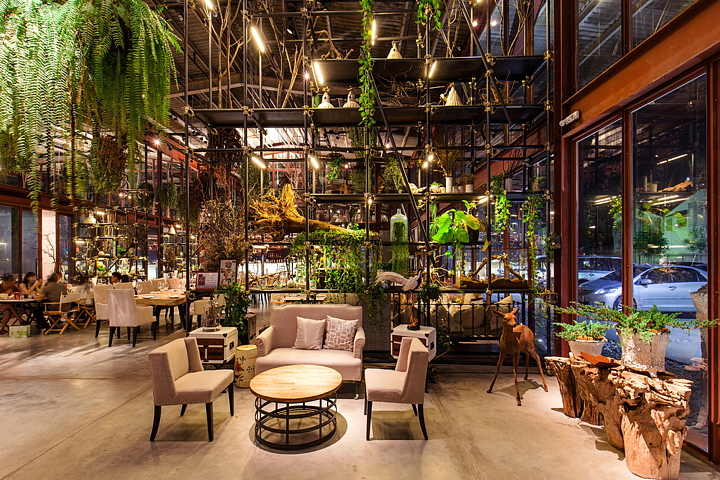 In order to create the “Vivarium” restaurant in an old industrial warehouse in Bangkok on a tight budget, the young Thai designers from the Hypothesis agency came up with a very visually striking project.

To minimise the renovation budget, they kept the same original white colour of the existing structure, most of which they didn't change, and instead they painted the new additions with red rust-proof primer to accentuate the contrasting composition. This blend of old and new shaped around the 3 Rs (reuse-reduce-recycle) is emphasised again in the objects - iron doors, steel pipes, tree roots - that the Hypothesis designers found onsite and repurposed as decorations for the interior.

The basic concept of Vivarium, as the name itself suggests, is a terrarium - “a container of life” in the words of the Hypothesis design team. The interior has been decorated with lush plant life populating the upper part of the double height space for a “green feeling” in the old industrial structure, with the addition of fine ceramic creations by Yarnnakarn Art and Craft Studio.

The concept design by Hypothesis, already known for their adaptive reuse approach, was awarded by the jury of the INSIDE World Festival of Interiors in Singapore in the “Bars and Restaurants” category. 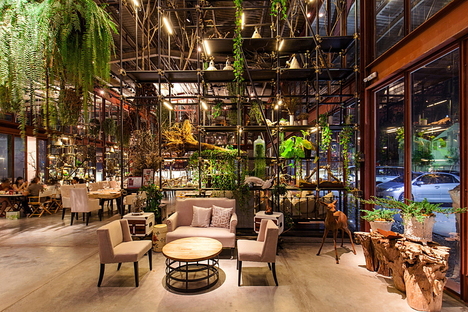