Chao Phraya Sky Park in Bangkok is a green landmark in the Thai capital, created out of the ruins of a railway infrastructure project left abandoned 40 years ago. The work of landscape architecture and urban planning studio LANDPROCESS has made this urban non-place into the nation’s first pedestrian bridge park spanning a river, an oasis of well-being for people, flora and fauna. 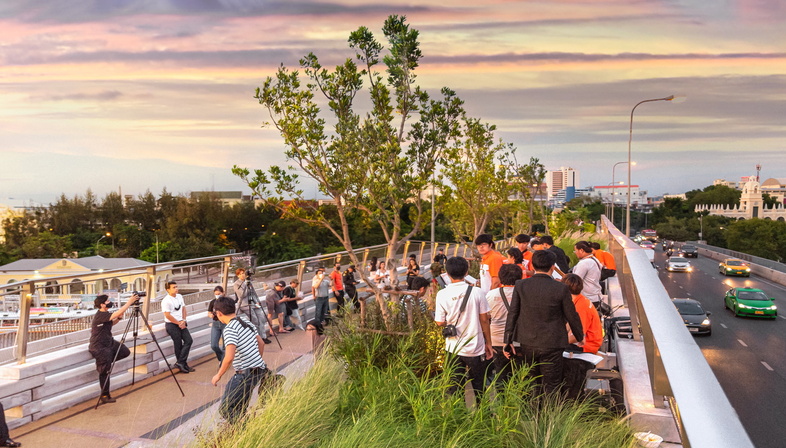 Abandoned infrastructure clearly has great potential for urban transformation, as we have seen with the New York High Line or MVRDV’s Seoullo in Seoul. Chao Phraya Sky Park in Bangkok is a project implemented under the guidance of the City Planning and Urban Development Department (BMA), Chula Unisearch, and Chulalongkorn University with the involvement of a team of experts including landscape architecture and urban planning studio LANDPROCESS, founded in 2011 by landscape architect Kotchakorn Voraakhom, winner of the 20220 UN Global Climate Action Awards, Women for Results.
The project began with the idea of rethinking a failed infrastructure project for urban transformation with a view to sustainability, wellness and biodiversity. The project began in 1984, when Thailand wanted to be the first country in Southeast Asia with a skytrain. The proposed Lavalin Skytrain was to take commuters from either side of Bangkok across the city’s historic neighbourhoods and main artery, the Chao Phraya River. And so a structure measuring 8.5 metres wide and 280 metres long was built alongside the road bridge, but it was never used for its original purpose: political wrangling put the project on hold, and then a government decision confirmed that the skytrain would never be built. The incomplete, inaccessible infrastructure was nicknamed "Saphan Duan", the "amputated bridge”.
But things changed in 2015 with the start of the Bangkok250 project, a plan under the guidance of the City Planning and Urban Development Department of the Bangkok Metropolitan Administration (BMA), Chula Unisearch and the Urban Design Development Centre of Chulalongkorn University to revitalise the central districts of Bangkok. The architects of LANDPROCESS say in their note for the press: „Several public meetings were held in order to involve citizens in the decision-making process. At one meeting, a community leader asked, "Why not put this useless bridge to good use, so our children can walk across the river to school?".
This sparked a virtuous process giving the amputated bridge a second chance as a public green space over the river, completing the dream of the Lavalin Skytrain in the form of Chao Phraya Sky Park (CPSP) connecting people in a truly sustainable way: on foot or by bicycle.
The amputated structure is located beside one of the country’s most important monuments, the Memorial Bridge (Saphan Phut), which is the city’s most important vehicle bridge across the Chao Phraya River and a tribute to King Rama I, who founded the city of Bangkok, making it one of the few points in the city from which it is possible to admire the view of Bangkok and the Chao Phraya River. CPSP has resulted in a major change to the situation, as Sky Park now offers all the people of Bangkok a unique point of view from which to look out over the city’s past and present.
But that’s not all: the reclaimed bridge also connects two community parks already in existence on either side of the river, providing a new link for flora and fauna as well as human beings, for whom the designers have sought to maximise the available 8.5 metre width between the lanes of the road bridge. The solutions adopted allow the CPSP to offer pedestrians a beautiful, safe walking experience by elevating all the structures in the park above the level of the road on either side, reducing noise and pollution.
Built during the first lockdown of 2020, CPSP in Bangkok offers an outstanding example of how to use resources and work with what we already have to improve public health and public green space while responding to the climate crisis and to the need to build resilient cities.
Let us close with a quote from the architects of LANDPROCESS: „ By repurposing the useless, and rethinking the conventional, we can create better cities with what we have, including abandoned infrastructure that should not be left behind.“