Makeover of a Swiss chalet by BUREAU

BUREAU, the studio of Daniel Zamarbide has completed the makeover of a typical Swiss chalet in Geneva. 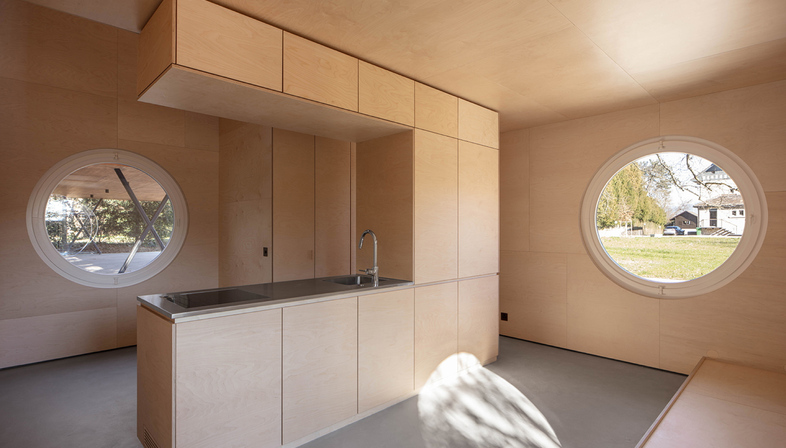 BUREAU, the studio of Daniel Zamarbide has completed the makeover of a typical Swiss chalet in Geneva. Mr Barrett's House is the reworking of the interiors of classic architecture from a contemporary and minimalist perspective, with surgical precision and with a very striking visual result.


Not interior architecture but internal architecture is how we could define the project by the architect Daniel Zamarbide from BUREAU, who has completely revamped a small chalet in Geneva. It was designed for a fictional character from Joseph Losey’s movie “The Servant”, hence the name Mr Barrett’s House. Inspired by this dramatic film, the architectural proposal starts from the inside and works outwards, striving to bring intimacy, spatial richness and different perspective experiences to the people who inhabit the small volume.
BUREAU completely gutted the interiors of the old building, originally split between a basement garage and a small first-floor apartment. The upper timber part, which looks a lot like your traditional Swiss chalet, was raised up and moved alongside for reinforcement and restructuring before it was once more placed back on top of the basement level.
A series of quite complex sections connect the two floors spatially. These create a richness of perception and a sense of space within the small volume of only 70 square metres.
The extensive use of birch wood on the interior surfaces creates a kind of rarified but at the same time cosy atmosphere, offering a whole range of perspectives with the aim of enhancing the living experience. All the interior spaces constantly serve to set the scene for dynamic relations.
The interior design was addressed with great care and delicacy, focusing heavily on the details that play such an important part in an intricate space like this. Among other things, the ladder inside one of the upper rooms is a direct reference to Aby Warburg’s study of the Hopi Indians, a tribe that originally inhabited the pueblos.
Daniel Zamarbide isn’t afraid of drawing on and referencing the experiences of other cultures. The chalet is a kind of melting pot and becomes a contemporary architecture aware of the underlying additions that lay the foundations for the nature and history of the context. These quirky interventions and successive layers on top of the original volume modulate the life of the building to make it unique. This also explains the round windows that the architect decided to use on the facade. These portholes give a different viewpoint of the outside from close up, a bit like being in a space ship orbiting the earth. It’s also another reference to the film that inspired the name of the project - the round mirror that allows Mr Barrett, the manservant to control his master.
The traditional outside appearance of the dark-coloured wooden chalet resting on the rock-solid base of concrete and stone is counterbalanced on the outside by the funky carport, so reminiscent of modernist architecture with its flat timber and steel roof and steel cross-beams.
Mr Barrett’s House is a project that plays with a range of registers of architectural tradition to craft something surprising but on the inside, without creating tension in its natural and urban backdrop of Lake Geneva. What we want to say is, don’t judge the house by its cover, because appearances can be deceiving and the apparently simple exterior that segues into such a dramatic interior confirms the great creativity of the BUREAU studio. 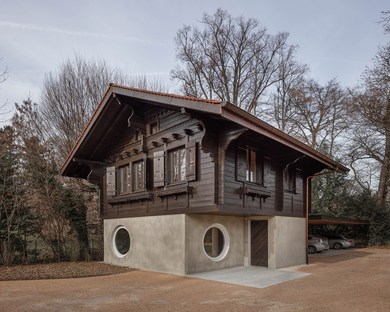 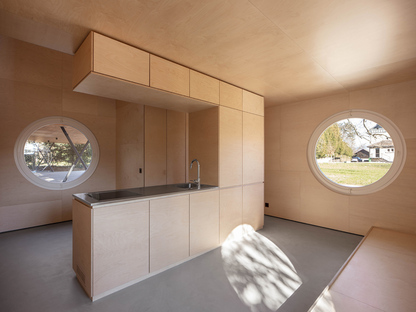 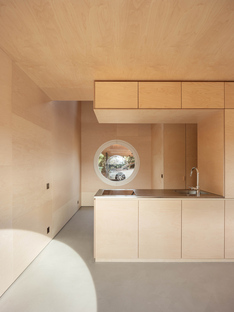 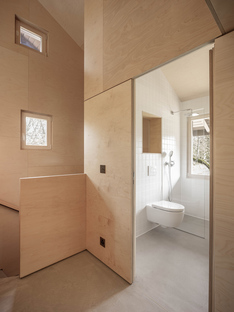 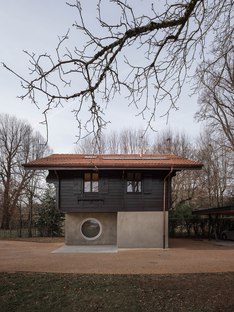 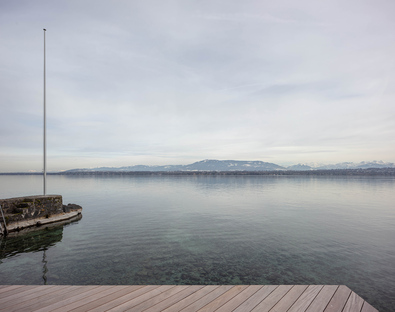 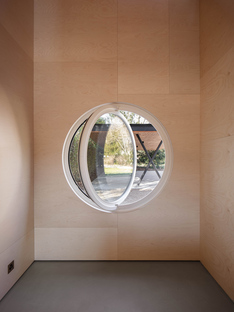 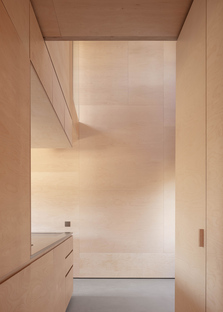 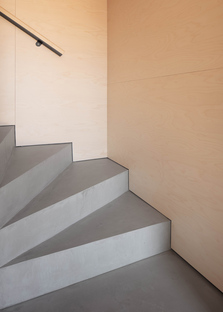 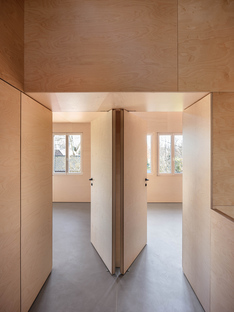 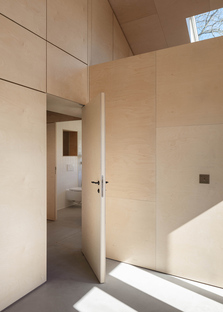 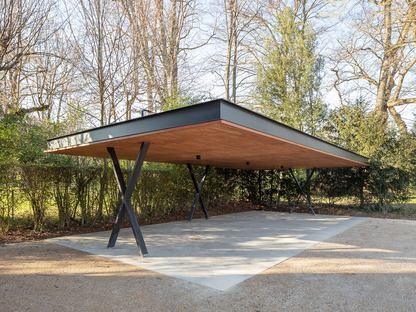 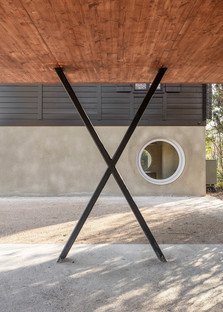 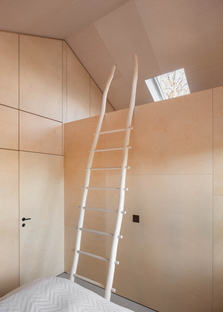