As part of the Meetings on Architecture programme to be held during the 16th International Architecture Exhibition - La Biennale di Venezia from May to November 2018, the Pavilion of Lebanon is organising a conference on the hinterland of Mediterranean cities.

As part of the Meetings on Architecture programme to be held during the 16th International Architecture Exhibition - La Biennale di Venezia from May to November 2018, the Pavilion of Lebanon is organising a conference on the hinterland of Mediterranean cities.


The Meetings on Architecture programme is being held during the 16th International Architecture Exhibition from May to November 2018. The programme, curated by Yvonne Farrell and Shelley McNamara, explores all the aspects of the FREESPACE manifesto. This initiative includes the conference called The Livability of the Mediterranean Hinterland, the inventory of what remains that will be held at 2:30 pm this Friday, 14 September 2018 at the Teatro delle Tese theatre in the Arsenale.
A panel discussion moderated by Hala Younes, architect, a professor at the Lebanese American University (LAU) and curator of the pavilion of Lebanon, participating in the Architecture Biennale for the very first time. The project of the Pavilion, called The Place That Remains, aims to provide an assessment of the Lebanese territory, an identification of what remains and a reflection on the built environment through an inventory of its undeveloped land. The area of interest is a highly endangered and intensively monitored terrain, namely the watershed of the Beirut River. It is presented using various traditional formats that provide the narrative of the nature of a given territory - things like relief maps, landscape photographs and aerial surveys.  The main installation in the Pavilion of Lebanon is a cartographic inventory, formed of a series of maps projected onto a 3D wooden topographic model. Even though maps are only interpretations of reality, they nonetheless provide a useful basis for reflecting on the liveability of the Mediterranean hinterland, something that concerns all the countries in the region. This theme is also taken up in particular by the Italy Pavilion, curated by Mario Cucinella (link article), moving interest from the now over-populated, over-built coastline, to the hinterland.
The future of Mediterranean cities lies, therefore, in the liveability of their hinterland and in their ability to validate their development in the direction of that part of the territory that was - and is - fundamental for the progress of the coastal city.
The conference will be attended by George Arbid, architect, and mayor of Maaser El-Chouf, founding member and director of the Arab Centre of Architecture in Beirut, David Mangin, architect, urban planner and winner of the Grand Prize for Urban Planning in 2008, Jad Tabet, architect, president of the Association of Lebanese Engineers and Architects, President of the Arab Union of Architects and former member of the UNESCO World Heritage Committee, and architect and urban planner, Paola Viganò, professor of Urban Theory and Urban Planning at the EPFL (Lausanne) and the IUAV University of Venice and member of the committee of experts of the Atelier International du Grand Paris. A group of experts who will be addressing the future of the coastal cities of the Mediterranean, comprising 24 nations for a total population of over 250 million people.
Christiane Bürklein 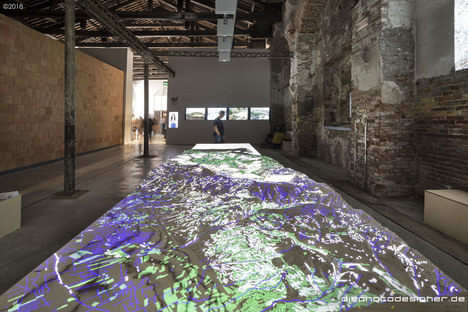 Lebanon’s debut at the Architecture Biennale 2018