The 59th International Art Exhibition at Biennale di Venezia has opened. Curated by Cecilia Alemani, the exibition entitled “The milk of dreams” was conceived and organised at a time of great instability and uncertainty due to the pandemic and even reacts to the latest geopolitical developments with Piazza Ucraina. 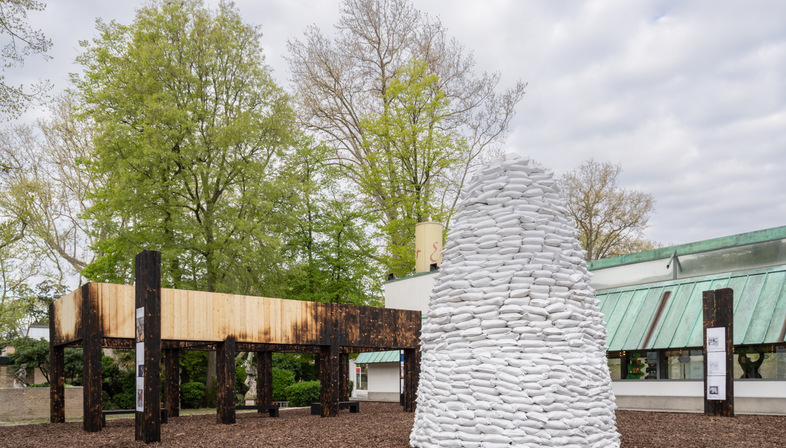 “The milk of dreams”, a title borrowed from a book by surrealist artist Leonora Carrington, “ is not an exhibition about the pandemic, but it inevitably registers the upheavals of our era. In times like this, as the history of La Biennale di Venezia clearly shows, art and artists can help us imagine new modes of coexistence and infinite new possibilities of transformation,” according to the press release about the 59th International Art Exhibition.
Curator Cecilia Alemani, the first female curator in the history of the prestigious event, even reacts to current events, to the war in Ukraine. As the curator herself comments, “art can be a tool for questioning the very notion of national identity and politics”. With reference to the long history of the Biennale, Piazza Ucraina, an installation created by Ukrainian architect Dana Kosmina in collaboration with the Ukrainian Emergency Art Fund and the Victor Pinchuk Foundation, “ is a platform of solidarity for the people of Ukraine in the earth of the Giardini, among the historical pavilions that were built on the very ideal of nation-state, shaped by twentieth century geopolitical dynamics and colonial expansions.” A bold statement that brings the widespread practice of protecting public art from bombing in Ukrainian cities right into the heart of the Biennale, recalling the importance of art and urban space in the dynamics of history.
Urban space is also the theme of a book presented on the occasion of the Biennale opening, in which the historic events of 1968 are illustrated through images of the city of Paris. In “Taxonomy of The Barricade – Image Acts of Political Authority in Paris, May 1968”, published by Nero Editions, Wolfgang Scheppe, director of the Arsenale Institute for Politics of Representation in Venice, looks at how aerial photography is used for government control, a technique which has further evolved with use of drone technology, permitting territorial monitoring with all its political and practical consequences.
Urban space and its representation is also the theme of the Lebanese Pavilion at the Art Biennale. With the support of the Ministry of Culture, organised by the Lebanese Visual Art Association (LVAA), “The World in the Image of Man” curated by Nada Ghandour, illustrates the perpetual action of the human imagination on the reality of the world. The exhibition revolves around “Allô Chérie”, a video by Danielle Arbid, a Lebanese-French director and artist who lives in Paris, and “Janus Gate”, by Ayman Baalbaki, a Lebanese painter who lives and works in Beirut. The set designed by Aline Asmar d'Amman, architect and founder of Culture in Architecture, includes an unfinished building recalling the forms of the contemporary ruins characterising the country’s urban landscape: Joseph Philippe Karam’s cinema in 'The Egg' centre and Oscar Niemeyer’s 'Rashid Karamé International Exhibition' in Tripoli. The dramatic installation measuring approximately 150 square metres is inspired by the Brutalist architecture that flourished in Lebanon beginning in the '60s, seen in a new way through the two artists’ eyes. The façade is covered with curved panels coated in a cement texture evoking the city of Beirut, a permanent construction site. The oculus of the pavilion opens onto the roof of the Arsenale in an invitation to look up.
“The milk of dreams” proposes “an imaginary journey through the metamorphoses of bodies and definitions of the human ”, including the work of more than 180 artists who have never participated in the International Art Exhibition before, with a majority of women artists and non-binary individuals, concretely rescaling the centrality of the role of the male in the history of art and culture today and offering a glimpse of new realities. 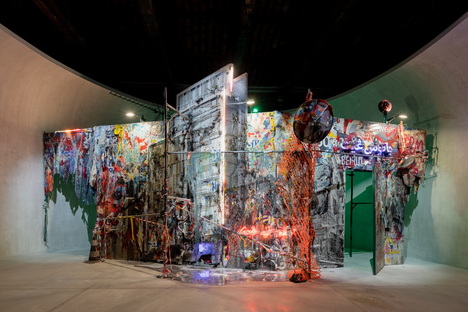 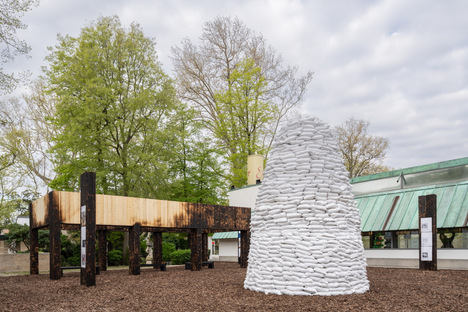 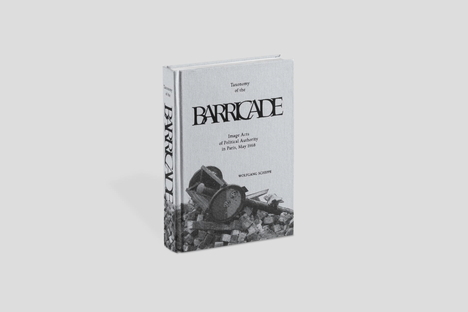 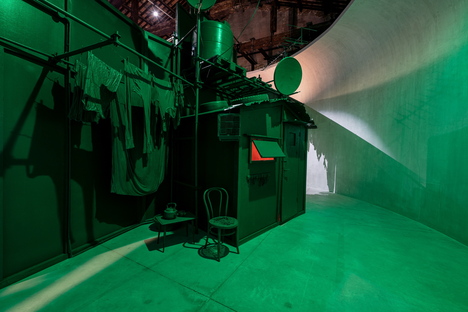 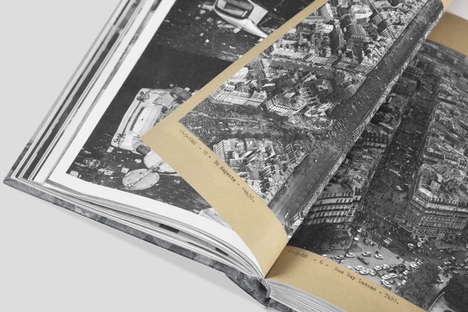 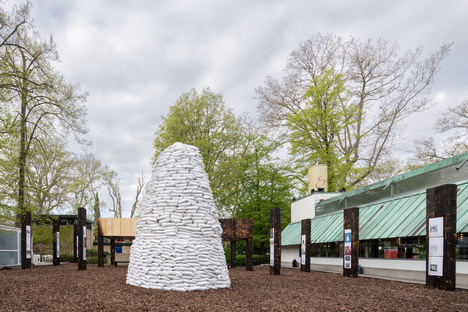 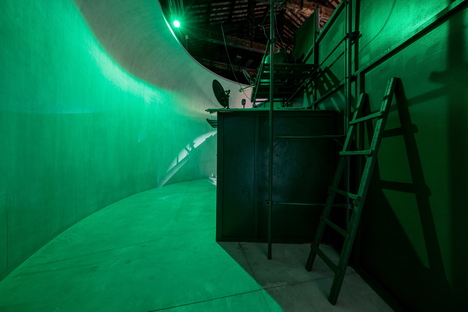 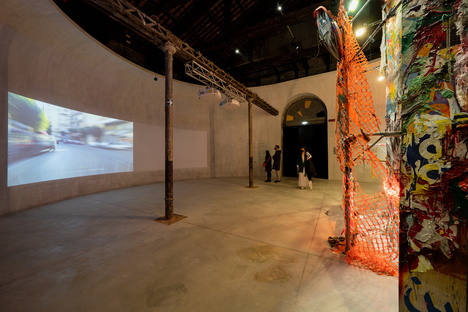 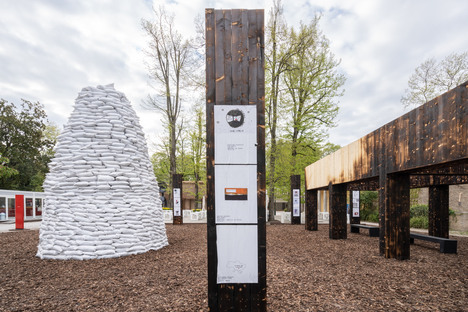 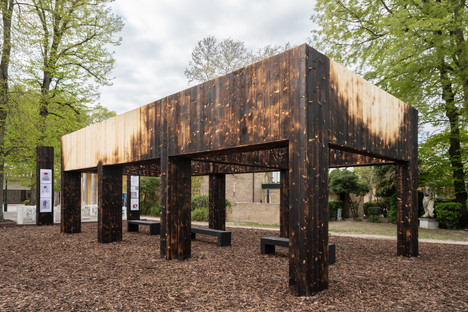 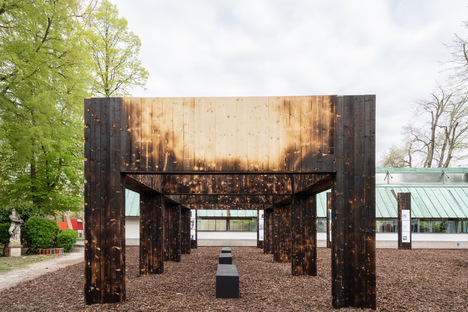 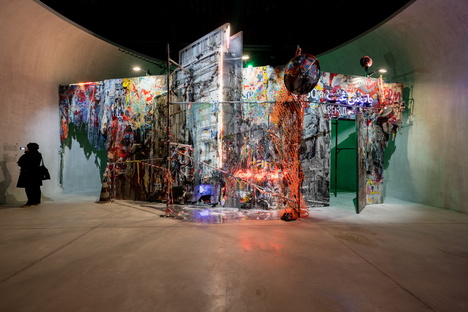