The Kingsbury Commons project in Pease Park, the oldest park in Austin, Texas, is part of the Pease Park Vision Plan and gives a burst of energy to a forgotten corner of the area. The project is the result of the collaboration between Ten Eyck, landscape architect and prime consultant, Clayton Korte for the architecture and Mell Lawrence Architects for the Treescape structure. 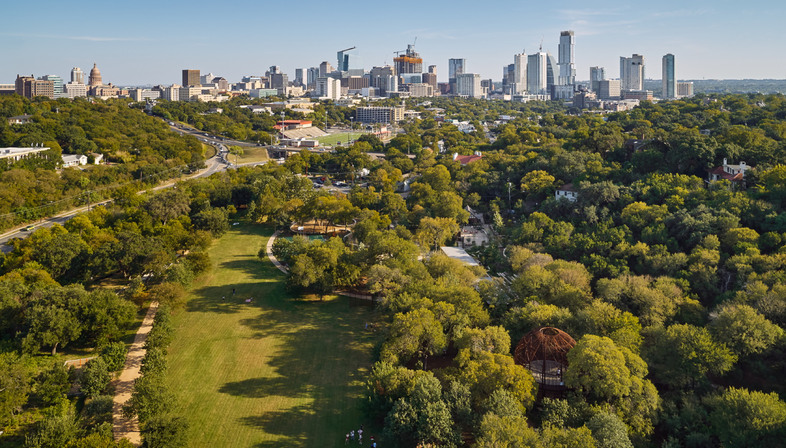 We are well aware of the value of parks in our cities and, therefore, attention and care for urban landscapes has been growing in importance. So it is by no means a coincidence that in Austin, Texas, the administration adopted – as early as 2014 – the Pease Park Vision Plan, developed by leading consultants Wallace, Roberts & Todd and Clayton Korte, to guide the future use and care of the nearly 34-hectare park. Situated along the banks of Shoal Creek in downtown Austin, Pease Park is the oldest public park in the city and one of the most loved. A space, however, that needed to be adapted to the new needs not only of citizens, but also in view of climate change.
Now the first phase of this project has been completed with the rehabilitation and enhancement of the southern tip of the park, Kingsbury Commons, “also affectionately referred to as the park’s "recreational heart and cultural soul"”, as we read in the press note. The synergistic work of the Ten Eyck Landscape Architects, Clayton Korte and Mell Lawrence Architects studios concerned, on the one hand, the renovation and expansion of the architectural heritage, such as Tudor Cottage, and the construction of a number of support buildings on the park’s western edge which, with their steel mesh walls and a landscape-inspired colour palette blend discretely into the natural context. In the design world, architectural elements always serve to highlight rather than to overshadow the natural context.
On the other hand, numerous interventions involved the park's green infrastructure and its climate resilience. These include the recovery of water infiltrations and restoration of the spring with the construction of a cobble and boulder-lined canal flanked by native plants that favours a lively ecosystem. Steel pedestrian bridges and limestone quarry blocks that crisscross the landscape allow visitors to traverse the spring and interact with it. Because great attention has been paid to interacting with nature and educating visitors about the geological formations and water systems of Central Texas.
A playground with natural elements has also been created, which invites children to explore the forest and get their hands dirty, together with adult fitness equipment in the shade of the large existing trees and a basketball court.
Well aware of the fact that the park is situated in a flood plain, the design team chose the materials not only for their proximity to the site or for their beauty, but also for their durability in case of floods. A key attraction of the project is most definitely the so-called Treescape, a two-level steel sphere, about 25 metres in diameter, which lures park users into the treetops.
Since the nature of the park is its primary wealth and beauty, the " existing vegetation was carefully protected during construction and both upland and riparian zones along Shoal Creek underwent ecological restoration and removal of invasive species. To support the rich tapestry of new native understory plantings, native soils were salvaged and stored during construction so that no soil was imported on site," thus avoiding compromising the park’s biodiversity.
This harmonious and meticulous work, on all fronts, has resulted in Kingsbury Commons at Pease Park being certified USGBC SITES Gold and awarded the Texas ASLA Honor Award 2022. Tudor Cottage, on the other hand, received the 2021 Preservation Austin Merit Award for the rehabilitation project. But the most important recognition is the great joy of Pease Park’s many users! 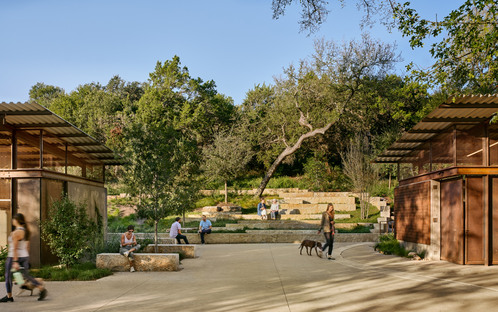 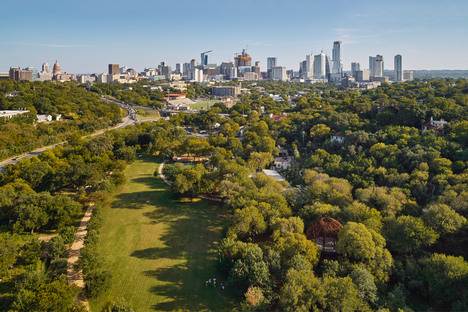 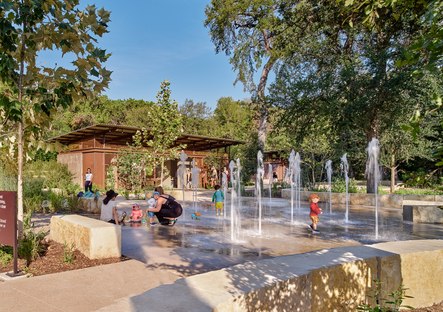 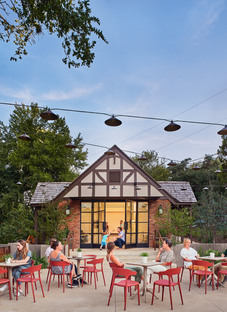 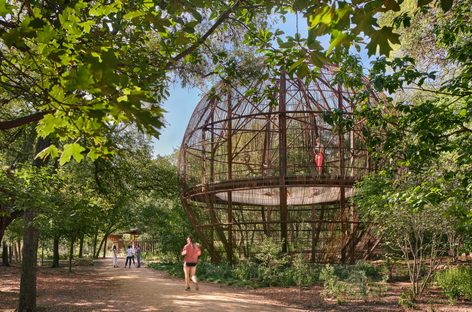 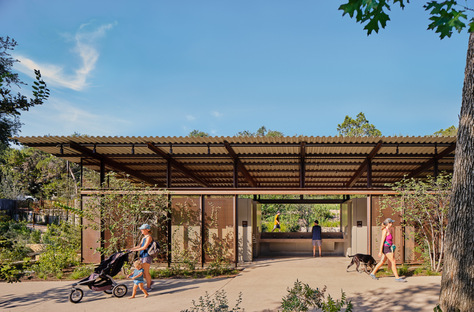 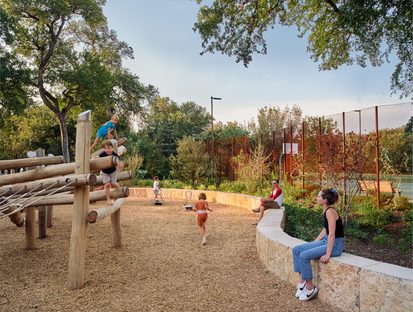 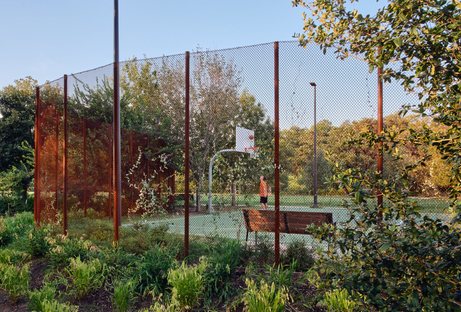 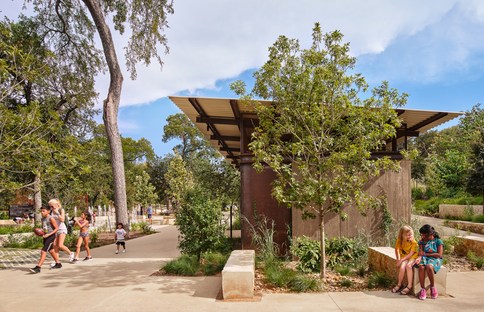 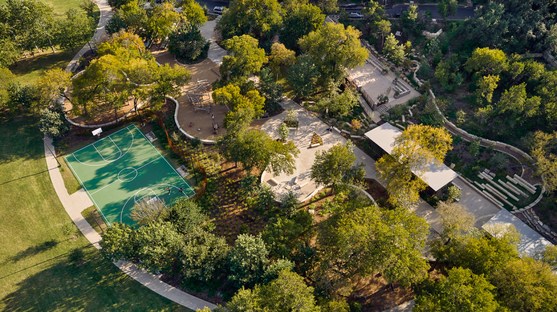 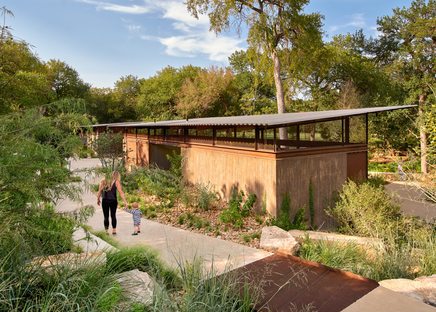 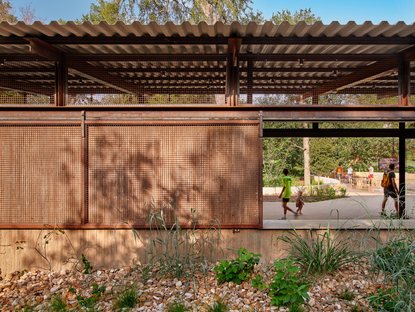 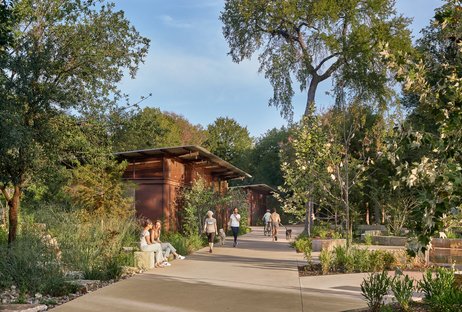 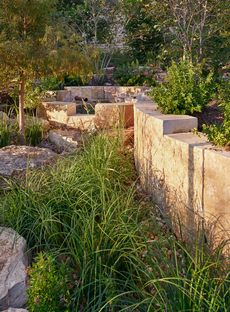