Architecture and interior design studio Clayton Korte, formerly Clayton Little, has renovated a home in mid-century modern style. The house in Austin, Texas designed by Howard R. Barr has now taken on a new look ready to respond to the challenges of contemporary living. 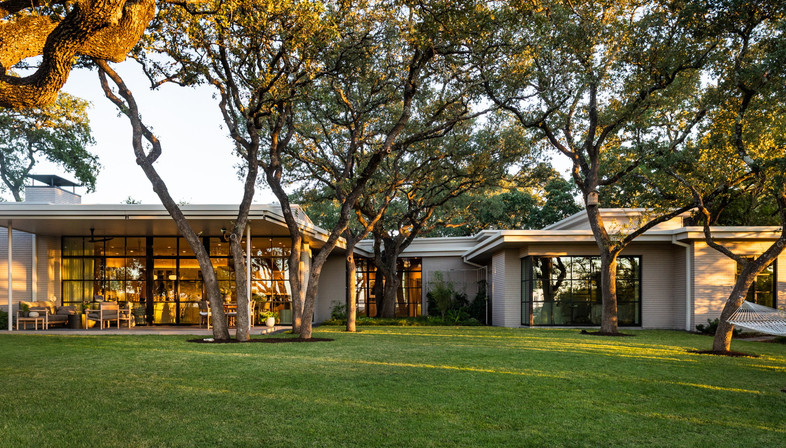 Austin’s Highland Park West neighbourhood and Balcones district, developed between 1945 and 1960, offer views over the city centre, the hills and Lake Austin, with plenty of big trees and a rural feeling despite the vicinity of the city. Many of the homes in the area were designed by prominent mid-century modern architects, including the Ridge Oak Residence, a masterpiece by Texan modern architect Howard R. Barr, a Fellow of the American Institute of Architects (FAIA), built in the late ’40s. Barr is best known for his institutional projects such as Austin’s Lyndon Baines Johnson Library and Museum, the United States Embassy building in Mexico City and the US Department of Labour in Washington, to mention only a few, but also designed many private homes.
The clients, regular customers of Clayton Korte, the new name of the studio formerly known as Clayton Little, purchased Ridge Oak Residence from Barr’s son in 2016, appointing the studio to renovate it and build a new addition. The task was perfect for Clayton Korte, a studio that has always stood out for its strong focus on local context and the user experience.
The architects respected Barr’s original project, preserving the brick on the front façade, the wood siding and the proportions of the openings punched into the front façade. The addition maintains the 3-metre-high ceilings, an unusual and innovative feature in 1950, along with the thin roof profile. In line with the project’s overall sustainability, the roof incorporates an innovative heating and ventilation system and a mechanical roof enclosure.
The addition expanded a house originally measuring 200 square metres with three bedrooms and two bathrooms, to a total of 343 square metres. The new wing now includes a kitchen, a living room, a family room, a generously sized master bedroom, a bathroom and a closet addition, while at the same time expanding the secondary bedrooms to create ensuite guest bathrooms. Meticulous trim work includes floor to ceiling white oak plank cladding made of shiplap, a type of wooden plank with a rural feeling that is commonly used on the exterior of homes, barns, sheds and annexes. In this case, however, while maintaining top quality construction, it does not subtract from the cosy atmosphere that this type of cladding lends the rooms.
Dialogue with the home’s prestigious natural setting also plays a key role in the work of Clayton Korte architects. Thus the arrangement of the new floor-to-ceiling steel windows at the back of the house amplify the views from Ridge Oak Residence, framing Lake Austin, greater Hill Country and an unrivalled view of the iconic Pennybacker Bridge.
All the work was performed with the utmost respect for existing plant life, as the expansion respects the critical root zones of the big central heritage oak tree that gives the home its name, welcoming the residents of this historic mid-century modern home with a new concrete cantilevered foundation better suited to the needs of today. 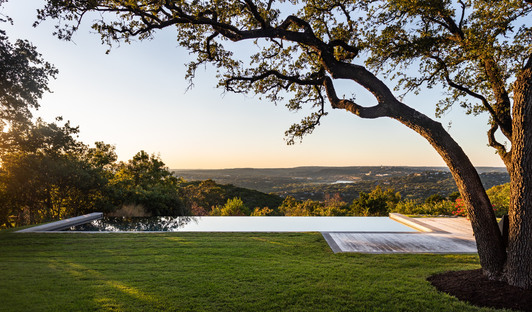 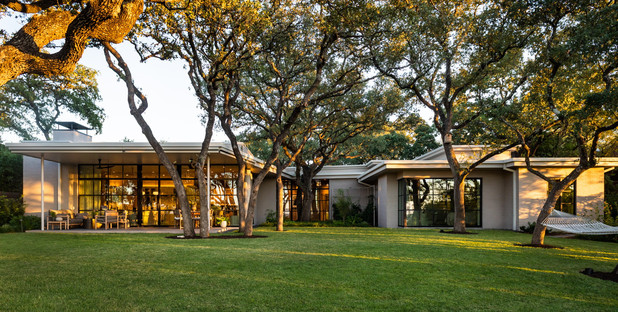 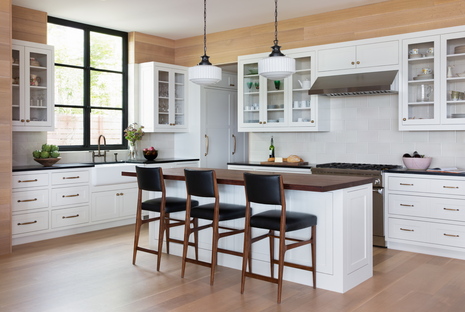 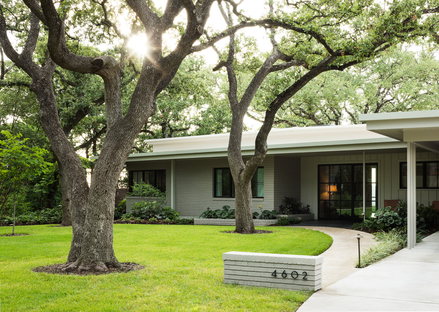 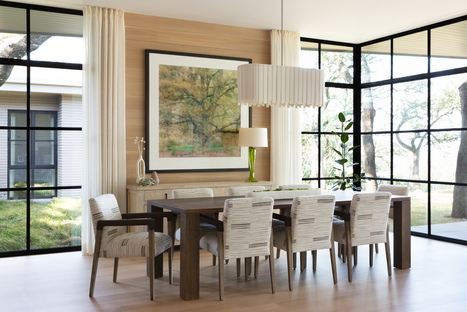 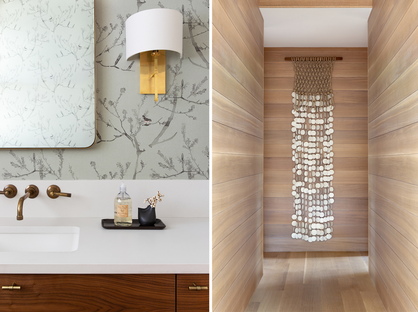 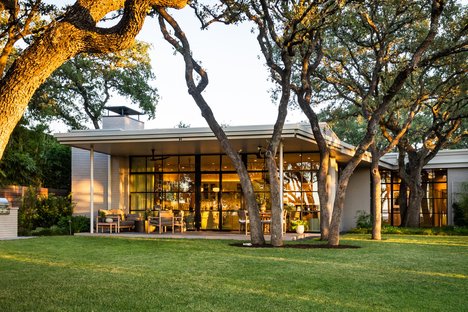 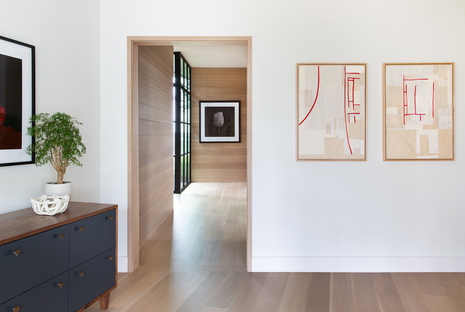 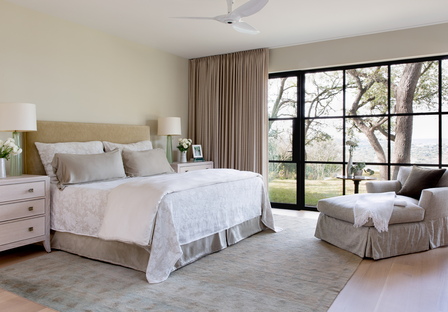 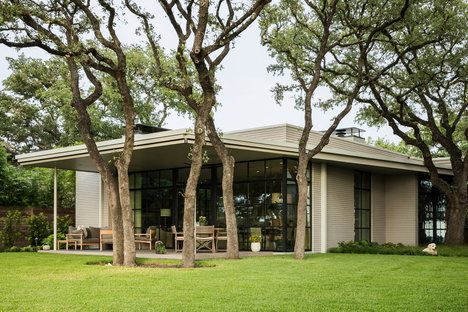 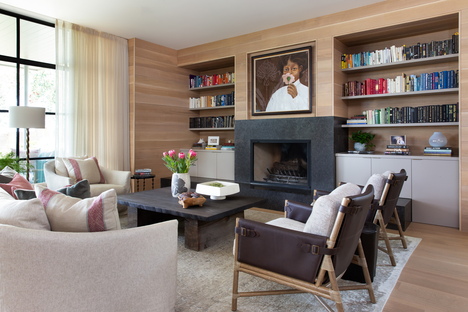 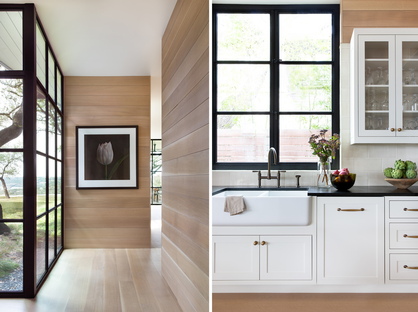 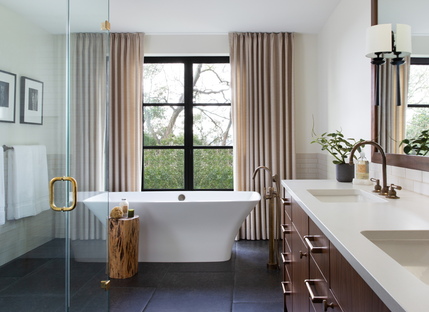 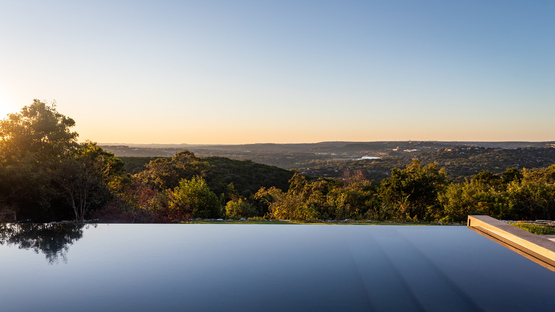