The project in Guadurnal, Ecuador by the architects from Al Borde and Taller General implements the reuse of materials and existing buildings to create a new space for the local community, which suffered huge losses in the April 2016 earthquake. 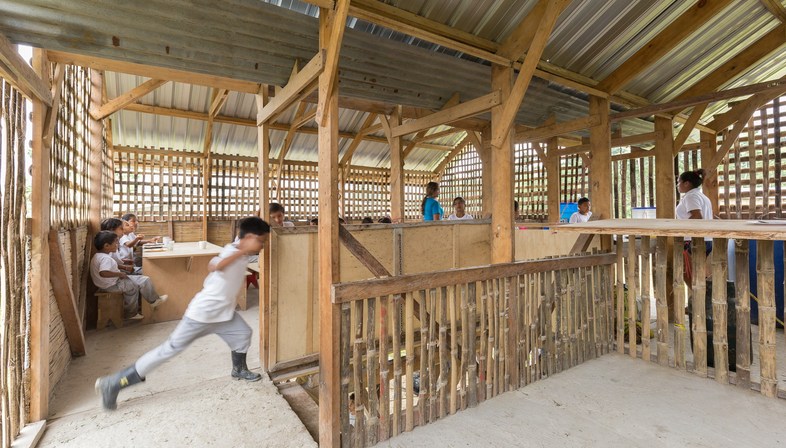 The project in Guadurnal, Ecuador by the architects from Al Borde and Taller General implements the reuse of materials and existing buildings to create a new space for the local community, which suffered huge losses in the April 2016 earthquake.


The latest project by Ecuador-based firm Al Borde with the designers from Taller General is located in Guadurnal - a town on the coastline of Ecuador that was particularly hard hit by the earthquake - and consists of a dining room with space for the 60 children from the local school.
The project itself is the result of a stroke of luck: Habitat III, the third United Nations Conference on Housing and Sustainable Urban Development in Quito was held in October 2016. The pavilion of the Mexican Institute Infonavit at Habitat III was designed by La Metropolitana with the possibility of a future reuse of the materials. The same design approach that Al Borde adopted when it was commissioned for the construction of the German pavilion as part of that same conference, also based on the assumption that materials would be used in another project. The pavilion by Al Borde was destined to be converted into some prototype homes for the victims of the 16 April 2016 earthquake, which the architects were working on.
So, Infonavit and Al Borde clicked and once Habitat III was over, the Infonavit pavilion was dismantled and delivered to the storage spaces of Al Borde, which set about looking for a new end use for these constructions.
After the earthquake, a civilian organisation of architects and other expert professionals called Actuemos Ecuador was founded to help the affected population through organised, coordinated support with government organisations. This organisation was contacted by UOCE (Unión de Organizaciones de Campesinos de Esmeraldas) asking for help for some communities; a team led by Taller General was tasked with giving expert support to the village of Guadurnal, where the thirty homes had foundational problems, and they attempted to fix these issues using recycled tyres to craft a stabiliser system. And because the Taller General network included the Al Borde architects, a location to rebuild the Infonavit pavilion with its two naves was found. First of all, they wanted to turn the pavilion into two school classrooms, but State government aid arrived in the form of a prefabricated school building.
With that necessity solved, they thought of creating the lunchroom for the children. Having learnt from meetings with the community, held as part of a participative approach, that the Guadurnal land is often flooded during the rainy season, with water levels rising by up to 2 metres, the architects decided to raise the pavilion on stilts. The space created underneath the structure is used as a kind of playground and meeting place, with hammock-style webbing in the shade for both the children and adults.
With all of this, the project very soon turned into the focal point of the town and the residents very enthusiastically covered the cane walls of the volume set on blocks of concrete. This surface was then decorated by the urban artist and graphic designer, David Sur with a mural that tells the story of its reconstruction as a dining room. By doing this, the pavilion became the repository of the history of this community. 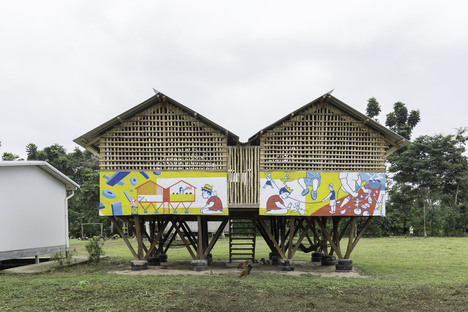 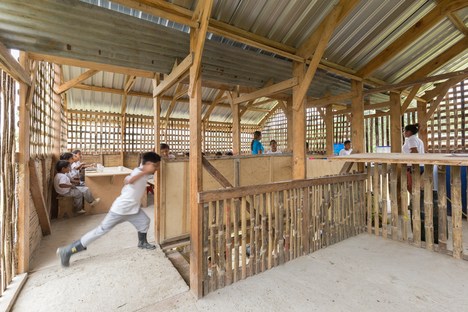 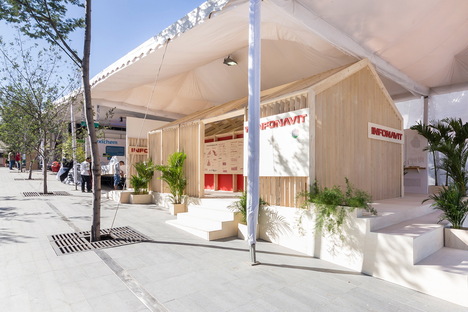 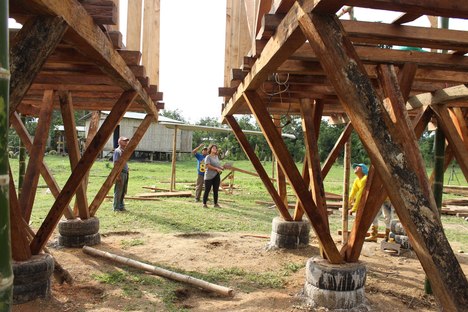 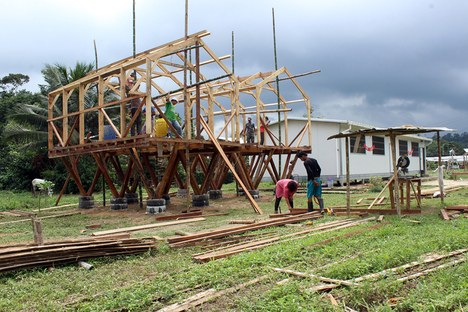 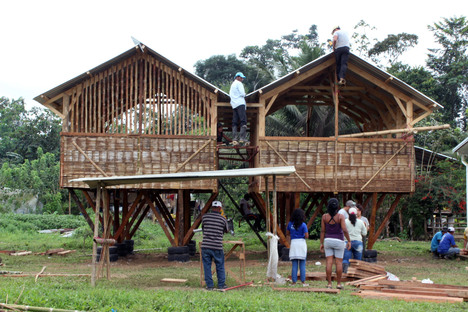 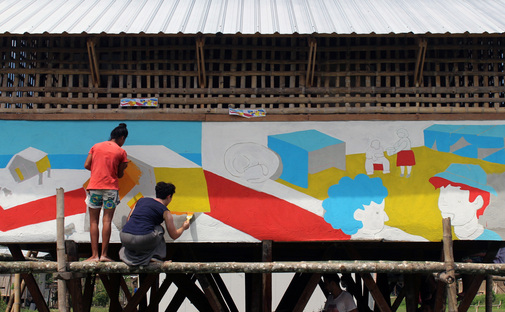 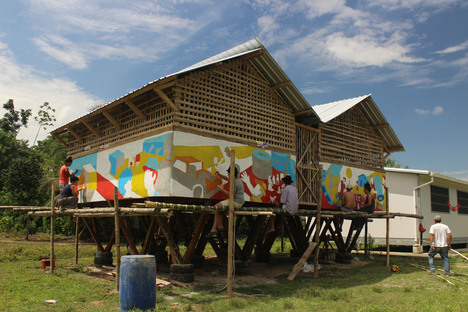 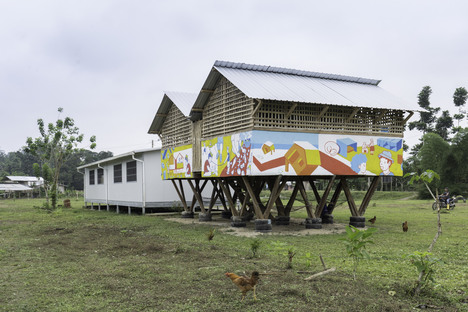 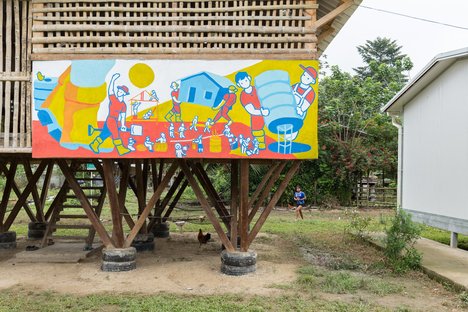 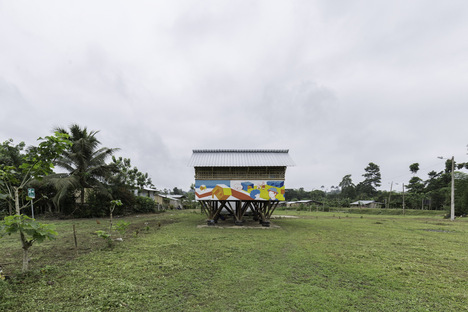 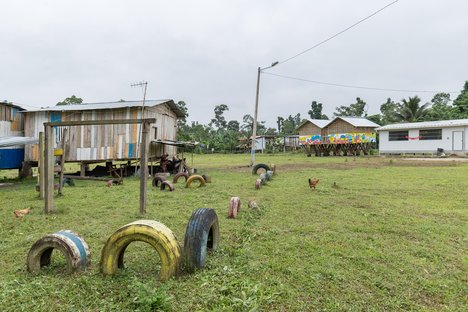 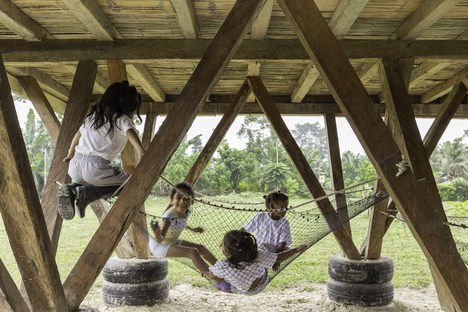 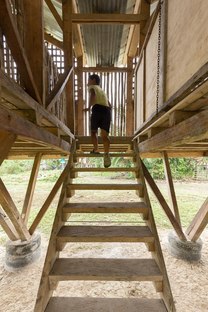 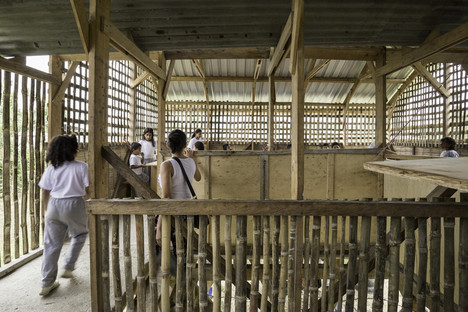 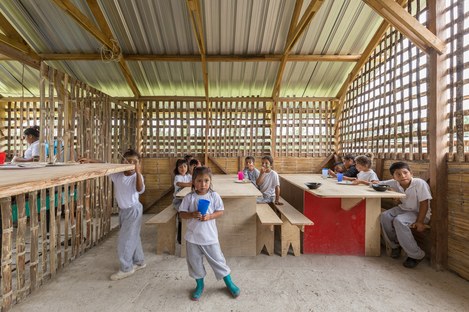 AL BORDE, The House of the Flying Beds