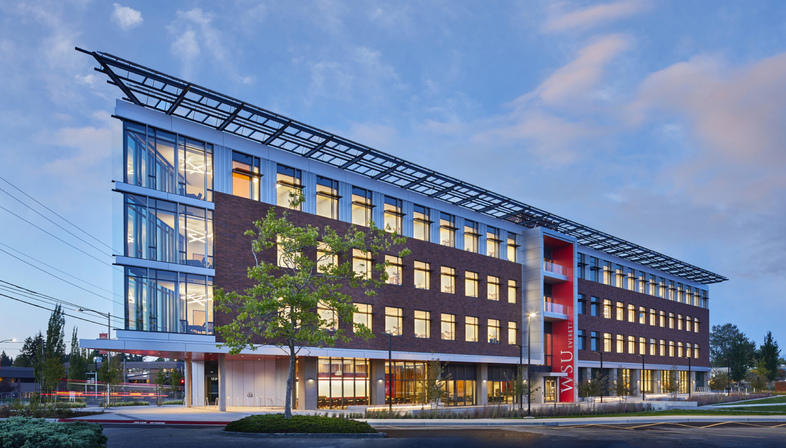 Washington is the first state in the United States to have enacted a law obliging state buildings to obtain a level of at least Silver Leadership in Energy and Environmental Design (LEED) according to the U.S. Green Building Council. This means clients and architects must maintain a strong focus on sustainability, which is ideal for a studio like SRG Partnership with a history working on projects with a particularly high environmental, economic and social performance.
This is clearly seen in the first building on the new Washington State University Everett Campus. Everett is a town with a population of 110,000 in Snohomish County, and the 8825 square metre building is the first on the new campus, establishing the architectural idiom and setting a precedent for planning future constructions. The building, with a focus on mathematical and scientific (STEM) disciplines, alludes to the visual and circulatory tenets of Everett Community College (EvCC), on the other side of the street.
The shape and orientation of the building designed by SRG Partnership respond in three distinct ways to the 6070 square metre site and its context. The first of these is interaction with the neighbourhood’s major traffic artery, North Broadway, establishing an architectural and material precedent. The second response is a courtyard including a broad plaza marking the building’s main entrance, and definition of the southern façade as the new edge of a future central quadrangle. Lastly, a paved courtyard to the north, flanked by engineering laboratories on two sides, provides an outdoor learning and event space.
The interiors are arranged around a four-storey atrium, the Innovation Forum. 6 metres wide and 42 metres long, the foyer serves as a central vertical link and a meeting-place joining the classrooms and laboratories to the east with the faculty offices to the west. This is where student services are located, along with a multi-tiered hall, a media-rich classroom, and Capstone Studio, a laboratory for innovation and technology transfer between students and industry. In this context it was essential to provide a monumental staircase that would be visible even from outside the building; SRG Partnership designed a cantilevered wood staircase composed of custom-bent and glued lamella stringers spanning up to 12 metres. In line with the studio’s philosophy, the staircase was handcrafted locally, using regional materials recalling the great history of the lumber industry in the Pacific Northwest and demonstrating use of renewable resources and advanced manufacturing techniques.
The WSU Everett building is LEED Gold certified by the U.S. Green Building Council for the sustainability of its construction and operation. Its thermal cladding exceeds the standards of the state energy code by 10%, and the building has an energy-saving heating and cooling system. Mechanically operable windows and louvres in the Forum ensure natural ventilation. Thermal energy is collected from the building’s data centre for use in the Forum’s radiant underfloor heating system. A 75 kW rooftop photovoltaic array cantilevered beyond the south façade produces most of the energy required, while a 75 thousand litre cistern below the Capstone Studio collects rainwater to meet 100% of the demand for toilet flushing water from September to June, diverting surplus water for irrigation. In short, the new WSU Everett has everything it needs to become a magnetic draw for students, combining functionality with sustainability. 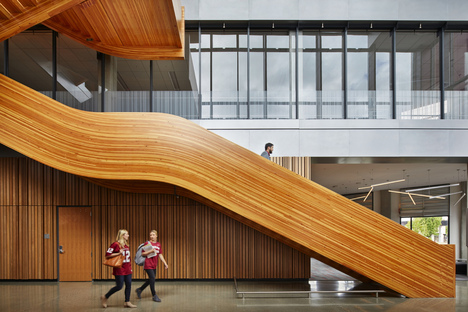 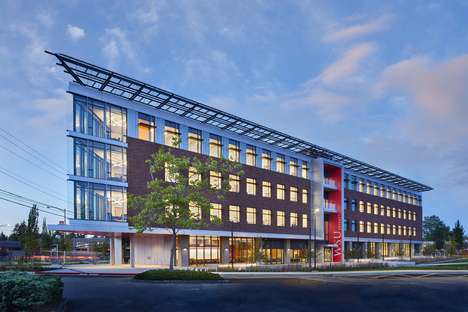 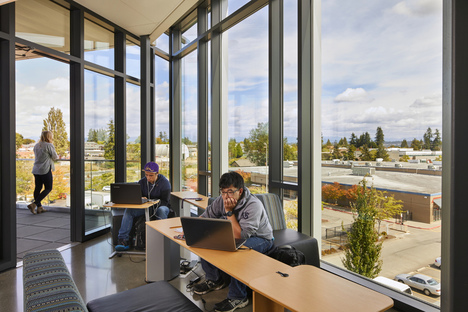 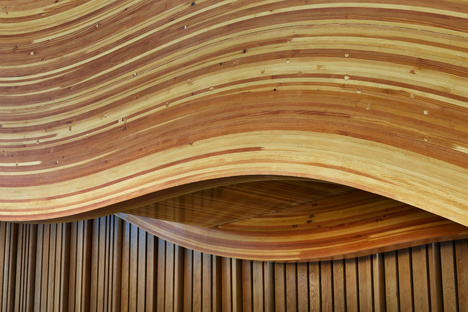 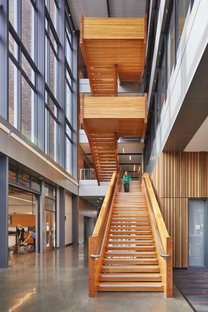 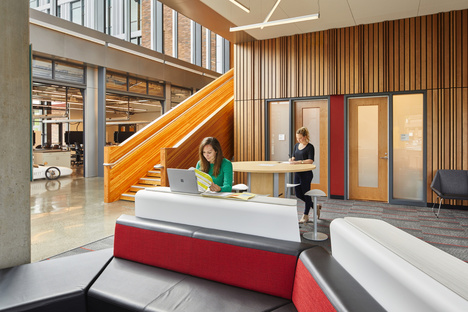 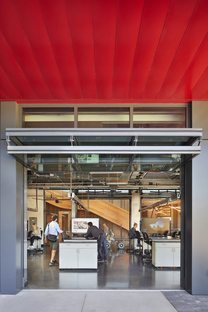 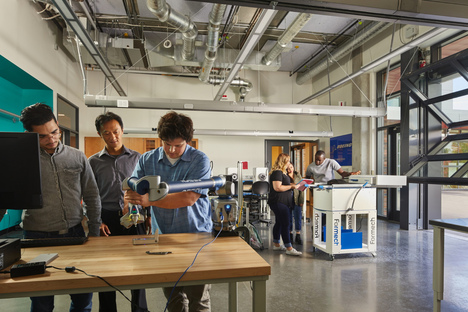 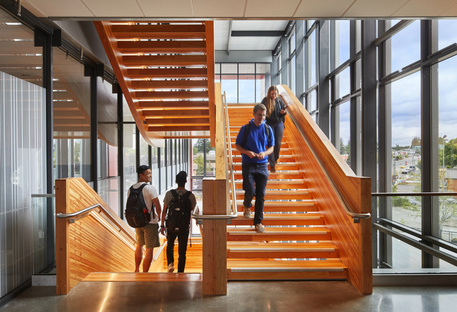 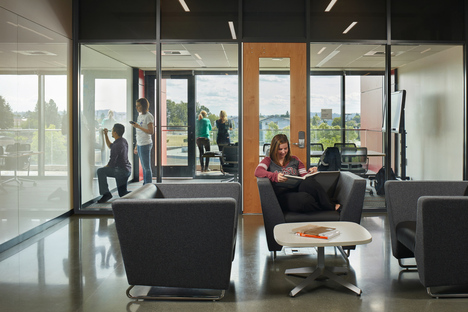 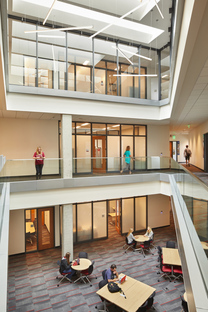 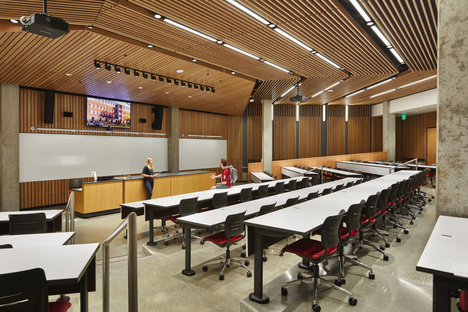 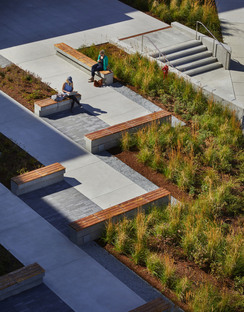 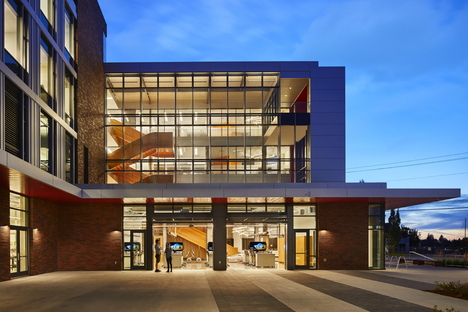 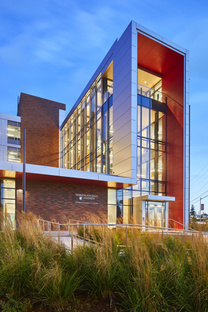