The Cougar Baseball Sports Complex on the Washington State University campus in Pullman, Washington, was the subject of a redevelopment carried out by the multidisciplinary firm SRG Partnership. It has now been transformed into a state-of-the-art facility offering a wide range of services aimed at enhancing the development and well-being of student-athletes. 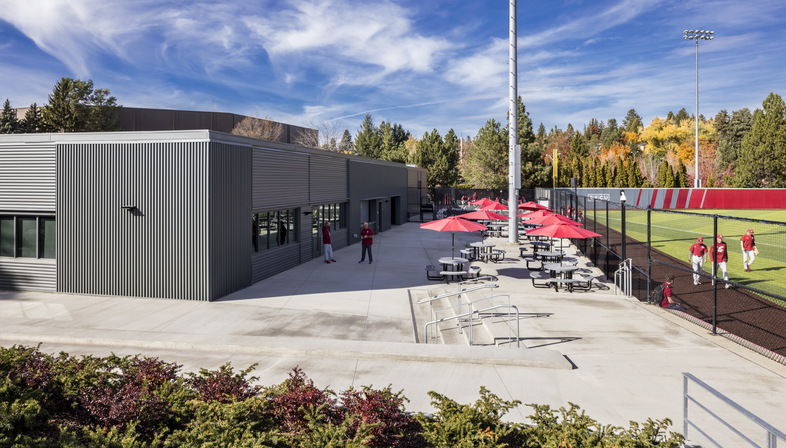 Playing sports is good for the soul and for the body, the very reason why sports activities play an important role at universities, especially in the United States. So it is no coincidence that the Cougars baseball team is almost as old as the Washington State University (WSU) in Pullman founded in 1890, where the sport has been played since January 1892 and where in March of that same year students organised the first official baseball team.
In 2020 the sports complex, which houses the field and the facilities used by the Washington State Cougars Baseball team, underwent a major redevelopment to better meet today's needs, with a focus on the well-being of student-athletes and on better enjoyment of the sport by spectators. For let’s not forget that baseball is an American family tradition:"Often referred to as America's National Pastime, baseball has had a very active role in the shaping of this nation. From the Civil War to Civil Rights and all points in between and beyond, the game of baseball supports and reflects many aspects of American life, from culture to economics and technological advances." as we read on the National Baseball Hall of Fame and Museum website.
The project proposed by SRG Partnership thus serves to enhances the game day experience for the surrounding campus and community through the new stadium entrance. The location of the new 1165-square-metre facility refers back to the existing Bailey-Brayton Stadium, to which it leads, on the corner of the street. A choice based on WSU's Masterplan, with the new architecture conceived as an important visual and pedestrian link for the broader campus context. All this, of course, with maximum flexibility for future growth and expansion.
In line with SRG Partnership's philosophy, which has long understood that wellness extends beyond the body and that mental and behavioural health are critical to holistic wellbeing, this aspect becomes the guiding idea of the new complex, which formally establishes a direct reference to the urban context, characterised by exposed red brick. SRG Partnership has thus placed great emphasis on the creation of the team facility, that place "where coaches and players come together to develop a stronger team bond and a championship culture", as the firm writes in their press release. The interaction between coaches, staff and student-athletes is, indeed, crucial to developing a strong cohesion and the architecture certainly accommodates this desire. The heart of the building is the canteen or "nutrition" area, designed to be multifunctional. The space opens up to the lounge and meeting room and visually connects with Bailey-Brayton Field, where the games are played.
In a complex such as that created for WSU Cougar Baseball, there can be no shortage of leading-edge services, focused on performance and geared towards the development of a well-rounded student-athlete. Alongside the weight room, gyms for strength and breath training, hydrotherapy, medical clinics and nutritionists' offices, we also find classrooms for training new champions.
Although WSU's baseball team did not win the famous Omaha tournament, there is every reason for the team to set its sights on the road "Back to Omaha", the storied venue for the College World Series and the fitting name chosen by the architects for the project. 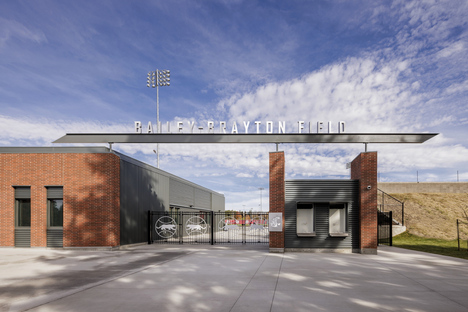 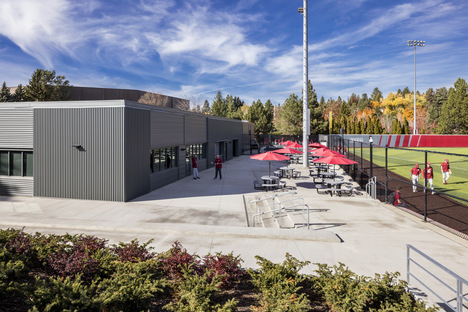 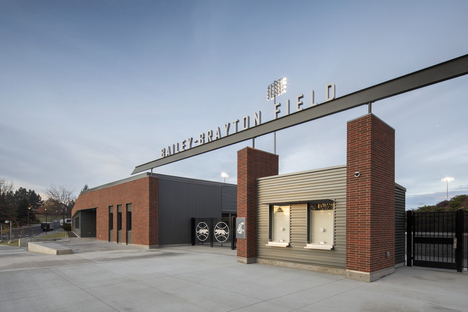 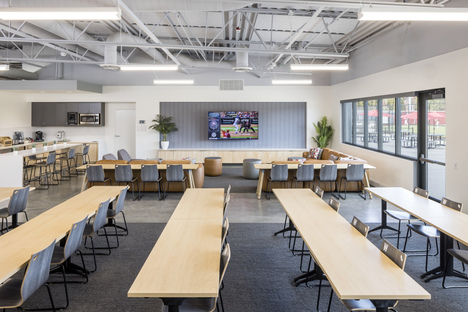 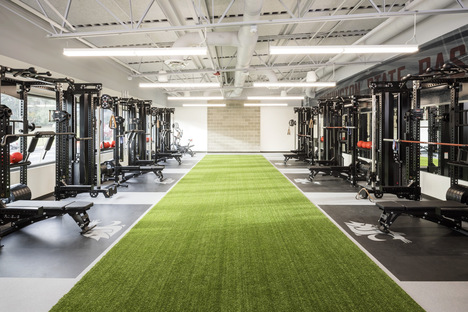 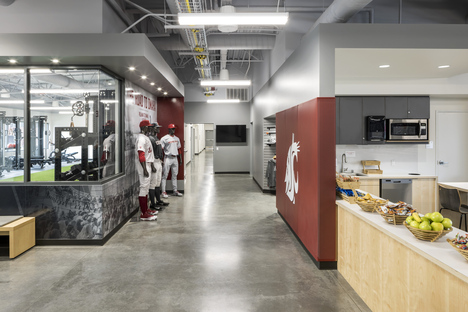 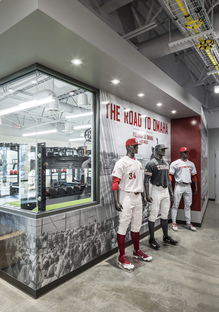 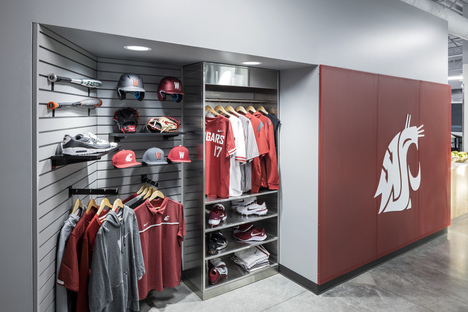 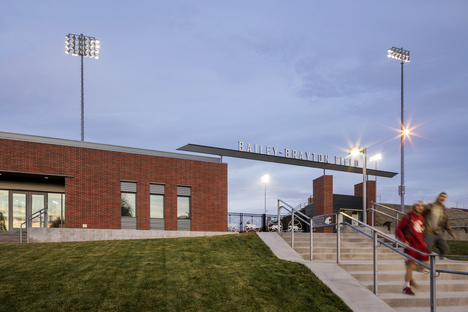 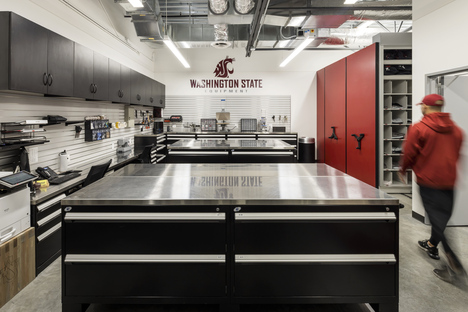 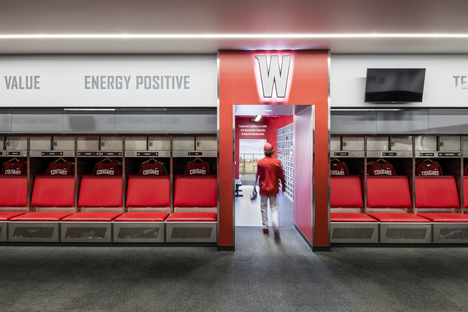 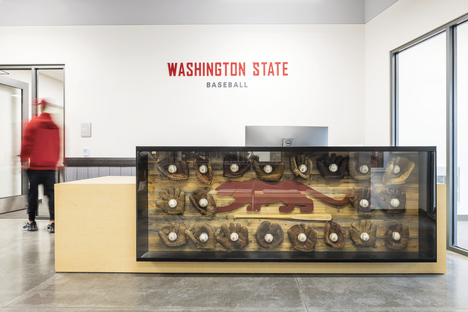 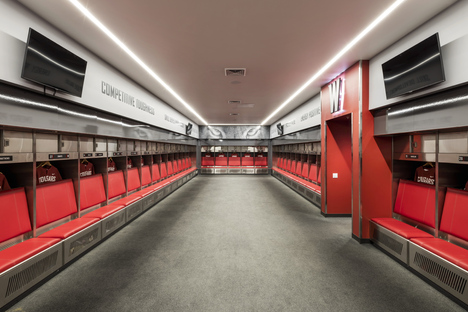 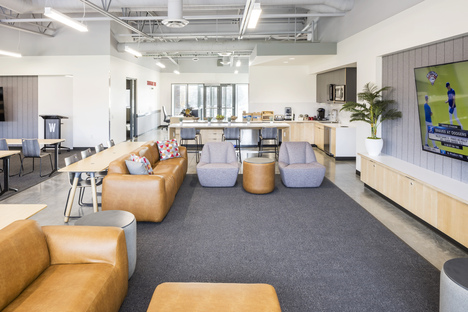