The Danish architecture studio, ADEPT has helped to transform the Carlsberg City district in Copenhagen. They worked their magic on Theodora House, a contemporary, mixed-use building complex that is part new construction and part reuse and all with the typical brick of this historic district. 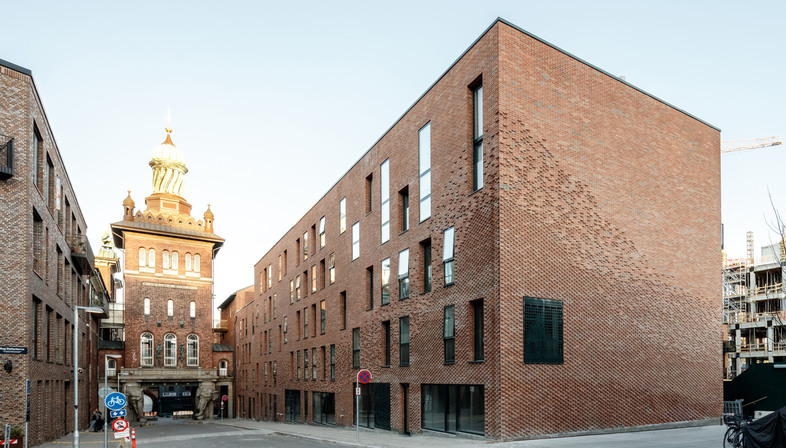 Four times larger than the Tivoli Gardens, the Carlsberg City opened its doors to the general public in 2008, when brewing operations of the famous Danish beer moved to another part of the country. This left the brewery area full of history and its architectural legacy of red brick walls and arches, like the famous Elephant Tower, ready and waiting to be converted into a new district.
At the time, a competition was launched for a masterplan to turn the whole industrial area into a contemporary green city, which the Danish architects, Entasis went on to win. The complete urban transformation project, slated for completion in 2024 comprises 600,000m2 of modern residential, office, commercial, educational and cultural developments in and between its existing mix of protected industrial buildings.
This is where Theodora House comes in. The project is by the Danish studio ADEPT and is named after the daughter of the Carlsberg brewery’s founder, Carl Jacobsen. The building stands right next to the famous Elephant Tower. It is adapted in materials and scale to its historic surroundings, with a style that, in 1901, the original architect, Vilhelm Klein borrowed from the Italian renaissance.
Part of the building complex that ADEPT designed is a new build and part is the reuse of a former yeast storage area. It was only possible to preserve one wing of the old storehouse, and this has been converted into offices that overlook one of the small squares in Carlsberg City. The new part of the building is mainly occupied by apartments, while shops and cafés on the ground floor connect it to the street and the district’s squares.
Theodora House reprises the historic architectural character of the Carlsberg Brewery. A walk around the five-storey building designed by ADEPT shows you how much it has absorbed the various expressions of brick used in the district, which not surprisingly is one of its main standout features. The architects decided to keep the original, bare brick facade of the yeast store. The Elephant Gate provides the transition to the new part of the building. The architects selected brick for the three recently completed wings to respect the existing facades, yet make a modern statement without seeking to camouflage. Indeed, the unusual brickwork that identifies the north facade of Theodora House was designed in close collaboration with the brick manufacturers. Here, a varied play of texture curves upwards towards the top of the five floors.
The private outdoor area has been designed as a bold contrast with the external facades; the apartments overlook a small green courtyard, and here the facades are covered with timber trellising, which in time will become green walls as plants climb up them.  Theodora House by ADEPT is, therefore, a contemporary evolution of local history and it is interpreted in all its beauty through the shots taken by renowned photographer Rasmus Hjortshoj during the COVID-19 lockdown period in Copenhagen. 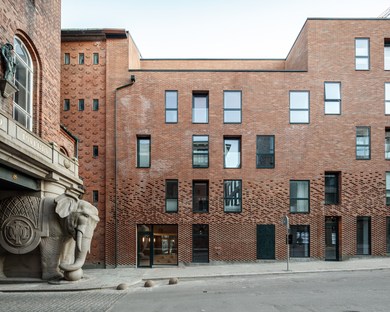 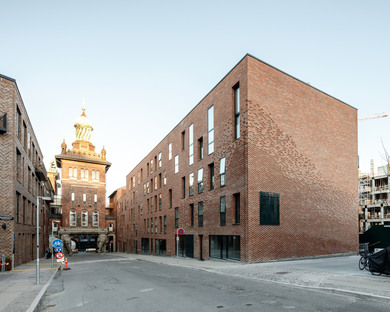 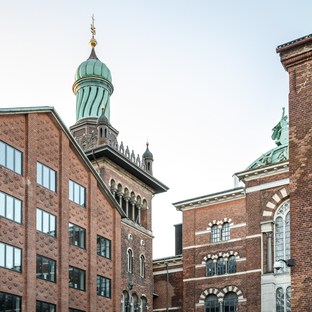 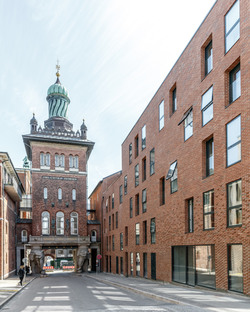 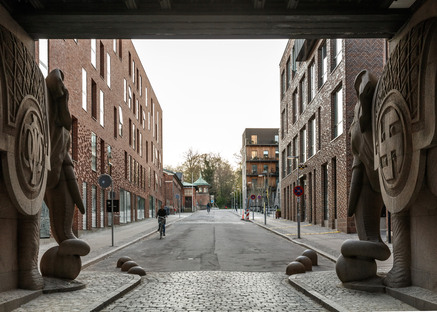 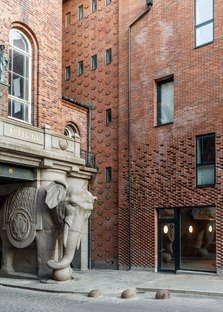 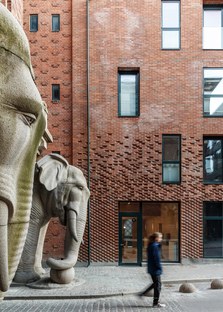 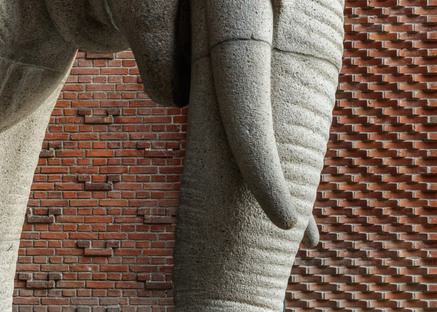 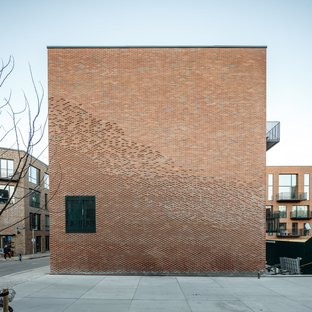 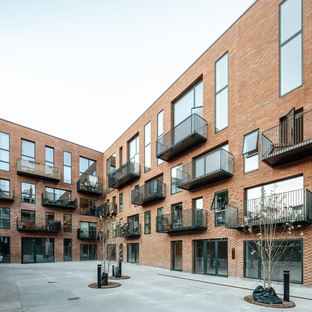 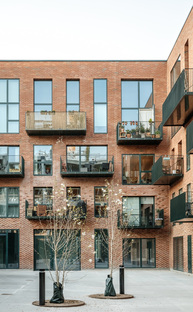 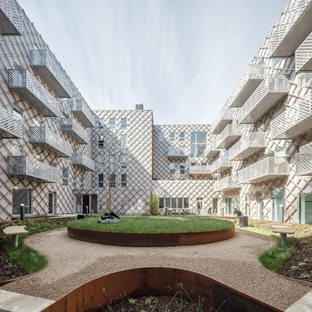