Danish firm EFFEKT are the architects behind the Forest Tower for the Camp Adventure Park in southern Denmark, which offers a wide range of activities based on interacting with nature, such as tree climbing and aerial ziplining. But its iconic tower is the true landmark that brings visitors back into contact with nature.

The Forest Tower by EFFEKT was hotly anticipated by all even before it was built and opened to the public, back in March 2019. From the very first renderings posted online, it became clear that the Danish firm, founded by Sinus Lynge and Tue Foged, intended to create not only a spectacular structure, but a truly unique experience. Indeed, from the very outset its intention was to bring visitors closer to nature and offer a new perspective on the Scandinavian boreal forest in which it is set. This concept garnered it the German Design Council Award, winning ‘Best of the Best’ in the Concept category. What’s more, in 2017 it won the ICONIC Award in the Visionary Architecture category and the prize for best tourism initiative in southern Denmark in 2018.
Visually, the new tower rises majestically up through the historic forest of Gisselfeld Klosters, a glacial forest featuring rolling hills, ephemeral streams, lakes, wetlands and meadows located just an hour south of Copenhagen. A setting that already offers a spectacular landscape experience in itself all year round through the changing seasons, as showcased in Rasmus Hjortshoj’s striking photographs. The area can be explored in a low-impact way thanks to a 900m-long raised walkway that zigzags amidst the trees, culminating in the park’s crown jewel: the new 45m-high tower with its 650m-long spiral ramp, offering unprecedented views of the surrounding natural landscape.
The idea behind constructing a walkway with a tower at the end was to make the forest accessible to everyone, without the human presence negatively affecting the natural environment, which is the habitat of a vast range of animal species. A dialogue with the context that also influenced the choice of materials: the tower itself is built from reclaimed steel and locally-sourced oak.
Architect Tue Foged says: “Nature provides the real experience. We just made it more accessible and offered a series of new and alternate perspectives”. It is no coincidence that the tower is shaped in such a way as to optimise the visitor’s experience, eschewing the typical cylindrical form in favour of a curved, hourglass-like profile with a slim middle and flared base and tip. Indeed, the choice allows guests to come that much closer to the forest itself. Whilst the spiral ramp that leads up to the observation platform benefits from the hyperbolic shape, maintaining a fixed angle of incline as it rises, the geometry and spacing fluctuate according to the curvature of the tower itself. As such, it becomes an almost sculptural element that makes the journey to the top of the tower something special and truly inclusive, in that it allows barrier-free access to all visitors. What’s more, in clear weather, the very top of the tower offers a spectacular view of up to 50km away, with Copenhagen and Malmo visible to the north and the rugged landscape of South Zealand to the south and east.
In conclusion, this new landmark is living proof of how architecture can help people to reconnect with nature. EFFEKT managed to achieve this by asking themselves the right questions and collaborating with an interdisciplinary approach in their efforts to bridge the gap between cities and natural ecosystems. And all for the mutual benefit of all life, human and non-human, because that is the only way that we can survive and thrive together, as a planet.
The Forest Tower is part of the Ego to Eco installation (link) which EFFEKT is submitting to the 17th International Architecture Exhibition at Biennale di Venezia. 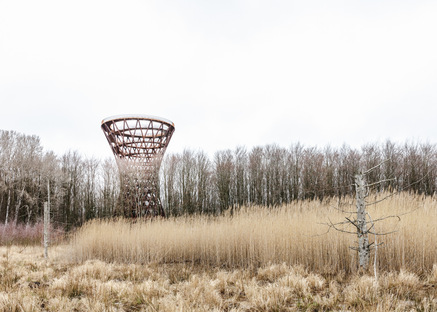 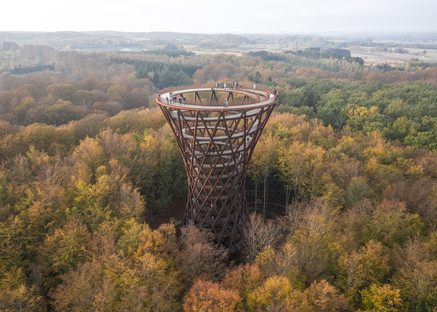 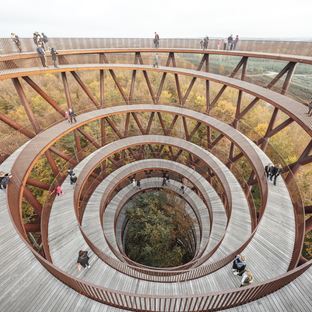 The Lookout Spike, a lookout point by Mjölk architekti