Barozzi/Veiga closed the year 2019 with another important project after winning an international competition: the new Tanzhaus in Zurich, a strong architectural symbol transforming the riverside promenade along the Limmat. 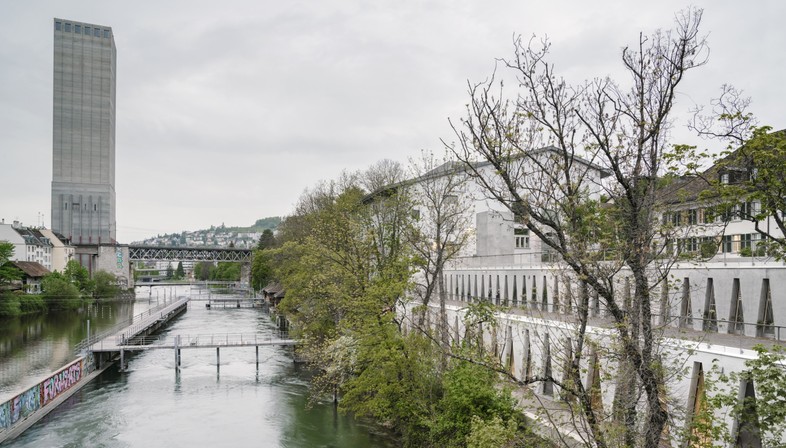 Barozzi/Veiga, one of the most interesting European architectural studios at this point in time, has completed another carefully thought-out project, another prestigious public building constructed after winning an international competition, providing an important link for the site with its history and symbolic character. The new Tanzhaus, a famous school of dance in Zurich that was destroyed by fire in 2012, was rebuilt in 2019 following a public competition.
Fabrizio Barozzi and Alberto Veiga have won several competitions for important projects such as the Szczecin Philharmonic Hall, the expansion on the Fine Arts Museum in Chur, the Music School in Brunico and the new Cantonal Museum of Fine Arts in Lausanne: exemplary cases of mending rents in the urban fabric, rediscovering what was not visible or usable, and achieving pacification with history in both the buildings thus preserved and the memory of the place. A process that is also a design manifesto for the Barcelona-based studio, clearly applied in its most recent prestigious projects, including the masterplan for the Chicago Art Institute and the new Oolite Arts building in Miami, currently under construction.
Tanzhaus is Switzerland’s most important contemporary dance centre, even though it was founded quite recently, in 1996. At the time it shared a former silk factory building on the Limmat River with the Swiss Textile School, but in 2012 a fire destroyed the main stage. The municipality quickly announced an international competition to design a new building while transforming a portion of the riverbank; Barozzi/Veiga’s project was chosen as the winner two years later, and construction took less than three years, staying within budget. The new building opened to the public on 6 September 2019.
Rather amusingly, the local papers report that a “simple building” was enough to create surprising spaces, and while it’s true that the Tanzhaus, like many of Barozzi/Veiga’s projects, appears simple and easy to understand, its simplicity is actually the formal synthesis of a process of in-depth study. It really is simple, sometimes almost imperceptible, because it is so harmoniously incorporated into its surroundings as to appear natural, as if it belonged to the place. The building looks as if it has always been a part of the bank of the Limmat River. The stepped volume accompanying the slope of the hill down from Wasserwerkstrasse 127, the continuous façade with trapezoidal openings, the synthetic form reflecting the surrounding infrastructure (viaducts, piers on the river and numerous longitudinal floating structures), even the concrete itself (from the previous structure), surrounded by pedestrian paths which join the riverside walkway: the whole project appears to speak the same language as the structures around it.
And so once more Barozzi and Veiga express their theory of “sentimental monumentality” in a form of architecture in a “state of equilibrium between the specificity of a place and the autonomy of the form”.
There is no way this long wall of trapezoidal solids and hollows could go unobserved. On the contrary, both it and the stratified structure resting on the hill conceal the bold identity of the city’s new monument, the missing link permitting regeneration of the public space on the opposite bank of the river. The architects say that the trapezoidal shape of the openings is a new variation on the traditional system of pillars and beams at right angles with rectangular windows. The trapezoidal shape is a synthesis seeking maximum permeability between inside and outside, connecting the riverside promenade and the walkway to the foyer while at the same time maintaining climate standards in the building. The repetition of this special shape and use of high-performing integrating concrete permit construction of an uninterrupted structural façade which both protects and characterises the building.
The space is organised on two levels, separating the private functions on the upper level from the public spaces downstairs. The rehearsal rooms on the lower level are introduced by a long foyer with a bar, the entrance to which is directly connected with the riverside promenade and the stairs up to Wasserwerkstrasse. On the upper level are a private terrace on the roof of the foyer and, on the inside, the offices and the big auditorium for performances. The series of trapezoidal openings on the second floor is located in the upper part of the outside wall, so that the stage is lit with natural light. The two different rhythms of the windows create dynamism in a modular façade.
Expressive and vital when seen from the other side of the Limmat River, the Tanzhaus is invisible from the road along the top of the riverbank, from which all we can see is the bare concrete elevator shaft: another symbol evoking memories of the building’s industrial past.
An innovative project, not only in itself, but because it is capable of redesigning a part of the city and becoming a visual landmark. A successful architectural synthesis inspiring the concept of the new dynamic logo of the Tanzhaus. 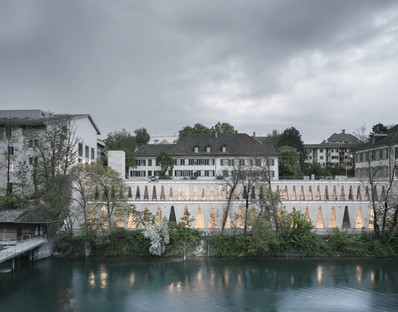 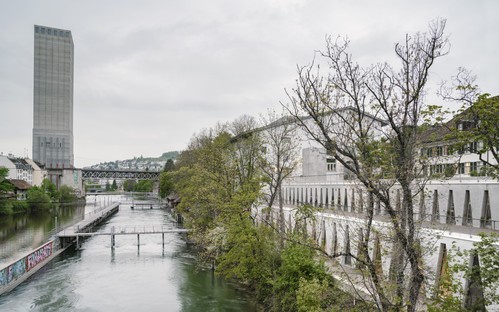 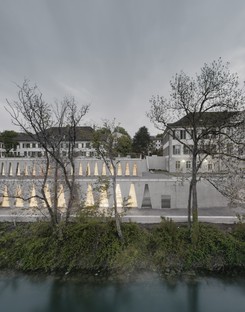 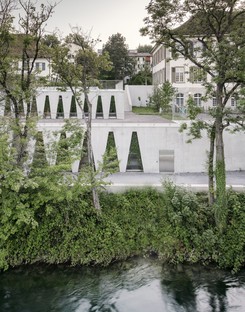 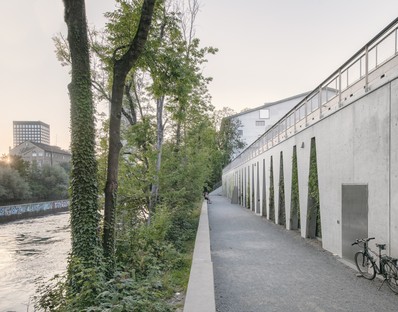 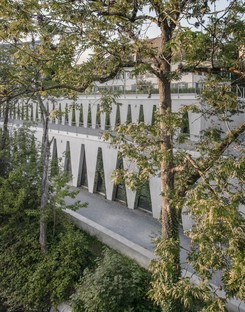 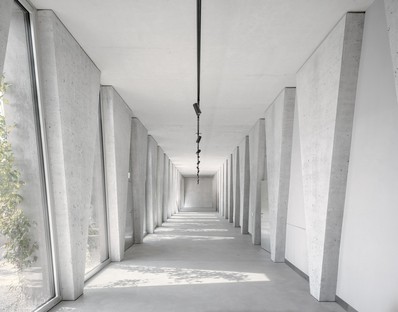 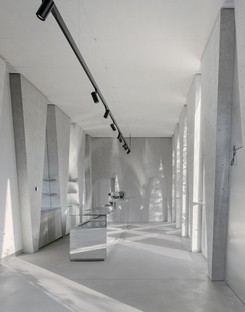 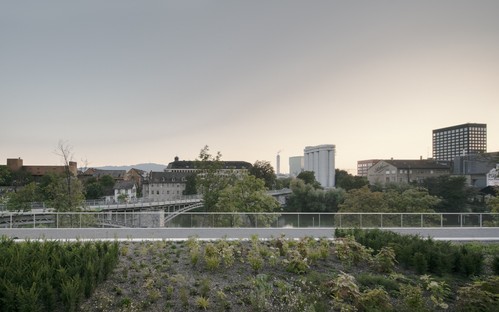 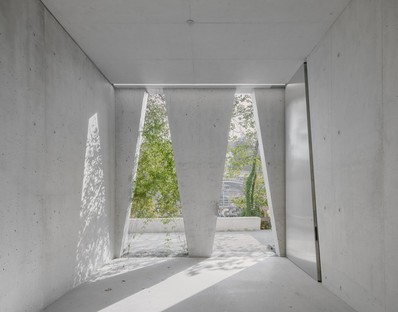 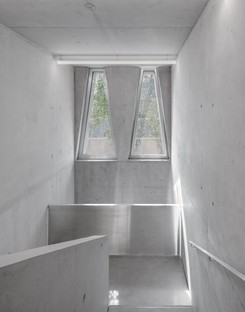 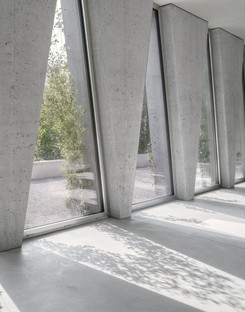 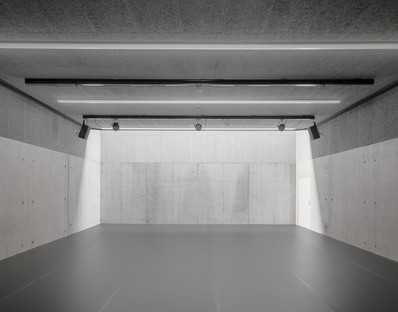 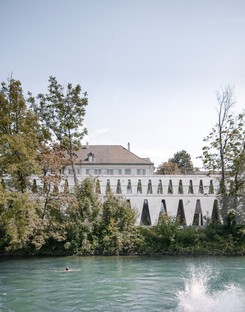 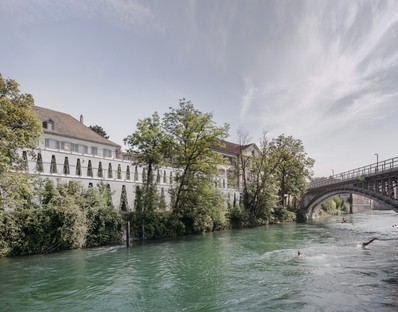 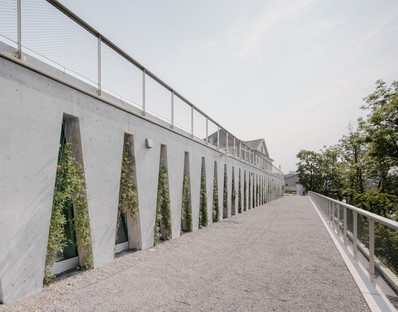 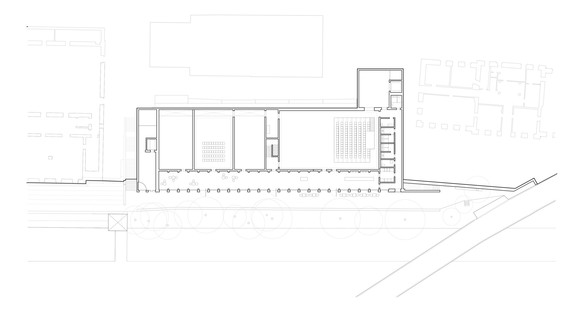 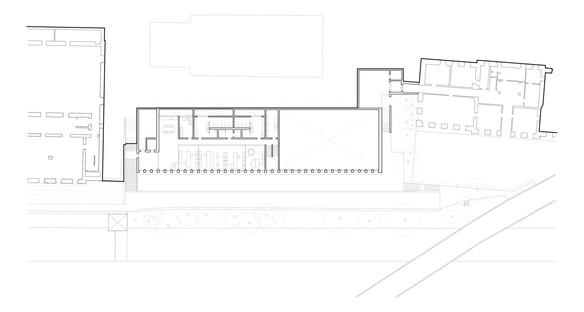 Gus Wüstemann: Affordable housing for the Baechi Foundation in Zurich