In projects for conversion of abandoned areas and buildings, Andrea Oliva stands out for his project for the former water towers which transform a site of industrial archaeology in Budrio (Bologna) into a work of contemporary architecture for use by the community. Traditional materials and forms are interpreted in a contemporary spirit in a project which has already become a new landmark in the town. 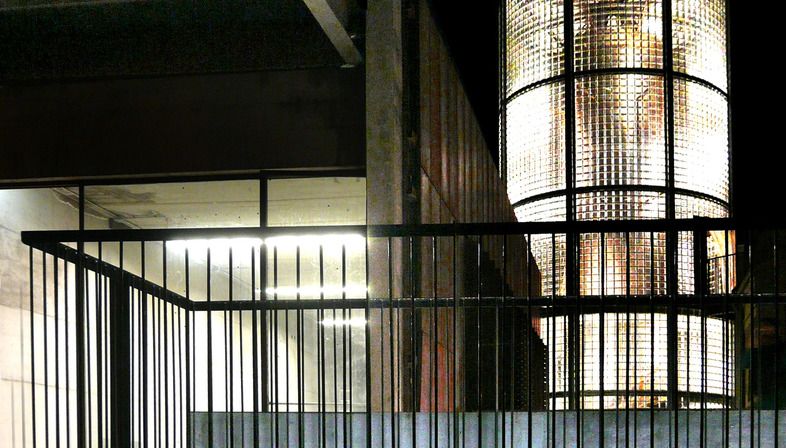 A project which demonstrates respect for history can make a monument more interesting, not as an archaeological finding representing nostalgia for the past but as a new building offering itself up for appropriation by its contemporaries today. This philosophy of design, defined as urban regeneration, was introduced by the Tate Modern, the London power station converted into a museum by Herzog e De Meuron, traces of which may be seen today in projects such as the former factory in Sheffield which Project Orange converted into a restaurant and offices or the former prisons in Palencia converted into a cultural centre by Studio Exit.
A recent project in the same vein is the functional restoration of a former aqueduct in Budrio, in the province of Bologna, by architect Andrea Oliva, which soon became a meeting-place for local youth, demonstrating the importance of architecture in the creation of spaces for the community. In 2003 the project won the Centocittà Award, a national competition for public administrations instituted by the Compagnia di San Paolo, with Renzo Piano as presiding judge, promoting recovery of unused public buildings in historic town centres for use by the community.
The conservation of the structures and interiors of the two piezometric towers built in the early 20th century revealed the original shapes and colours of the plaster and covering bricks, encouraging reflection on the choice of materials and colours to be used in the new buildings. The functional use of the former industrial site involved a third tower, a connection between the two octagonal towers, and a new building used as an exhibition centre closing the layout of the site, alluding to a logical thread preserving continuity between the past and the present expressed in the buildings? clear layout. The brick of the two original towers becomes glass brick in the third tower, which serves as a distribution centre, with a circular layout representing a simplification of the octagonal form: its meaning goes well beyond its functional purpose, for when lit up inside at night it becomes a lantern on an architectural scale, making the water tower complex a landmark even at night.


Conferences and concerts are held in the tank set into the ground and the octagonal hall in the lower tower, while the links between them are “temporary spaces” in which to hold workshops and courses. In memory of the city?s ancient walls and moat, the exhibition building bounds the site on the northern side with its rectangular layout and impenetrable façade with a ventilated brick wall: to the south, on the other hand, it opens up with a system of mobile corten sunshades controlled by automatic sensors to maintain the ideal climate inside. A restoration philosophy requiring elimination of technical elements in order to open up spaces maintained the spirit of the construction, using rough materials and industrial finishes as the lexicon of a new form of exhibition architecture. 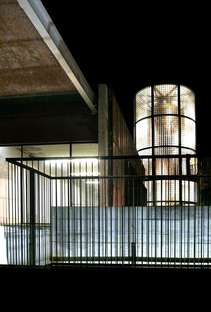 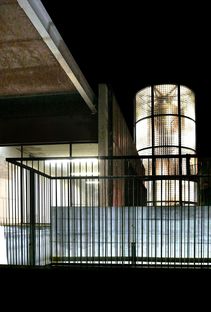