Andrea Oliva makes use of the big roof over Building 19 in the former Officine Reggiane, in an industrial archaeology project in which the new interior of the research techno-pole stands independently of the existing structure. 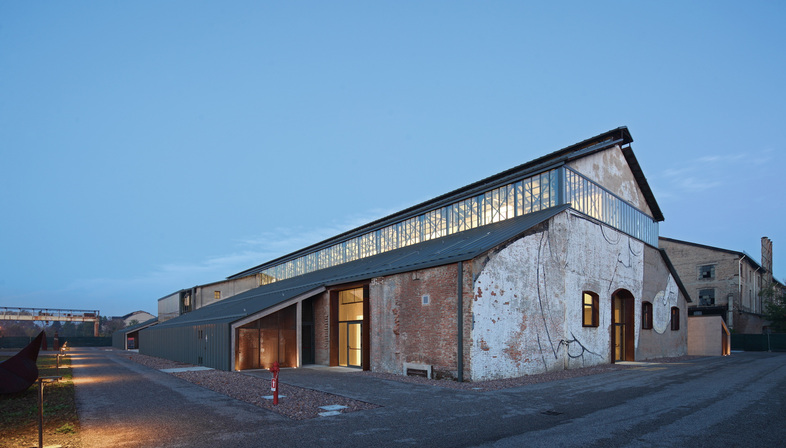 The Reggio Emilia research techno-pole is the first project in the plan for revitalising Officine Reggiane, a former industrial area. After winning a competition held by the City of Reggio Emilia, in 2013 Emilia architect Andrea Oliva completed the restoration of what used to be Building 19 in the Officine Meccaniche Reggiane factory, with functional adaptation of the space to contain offices and laboratories for industrial experimentation.
The history of Officine Meccaniche Reggiane illustrates the history of the city itself over the twentieth century. These warehouses were home to the economic heart of Reggio Emilia, making locomotives in the early twentieth century, converted to produce cannons and cannonballs during the First World War and then, as part of the Caproni Group, specialising in production of military aircraft, which is why the plant was bombed during the Second World War. War was followed by recession, with mass dismissals, and by the birth of the labour movement, allowing the factory to continue production on a reduced scale right until the turn of the new century.
As is often the case when a factory, and even more so an industrial area on the scale of Officine Reggiane, is abandoned and left to decay, the local people have taken action to preserve its memory, even organising protests. These include a series of acts of appropriation, such as those of a long list of street artists who have been climbing over the fence since 2012 in search of walls to paint, recognising the beauty of what had become a site of industrial archaeology. Graffiti art by Blu, the Fx collective and other names, some famous and others not, have drawn attention to a landscape that had gained symbolic importance.
<div class="embed-responsive embed-responsive-16by9">
<iframe width="600" height="315" src="https://www.youtube-nocookie.com/embed/kHyCuoa1YAE?rel=0" frameborder="0" allow="autoplay; encrypted-media" allowfullscreen></iframe>
</div>
Twenty-six hectares of land and twenty or so buildings constructed at various times in the twentieth century are strategically positioned on the edge of the city centre of Reggio Emilia, divided from it only by the railway line. A large-scale redevelopment project was undertaken under the title Parco dell’Innovazione, or Innovation Park, including not only the Techno-pole in Building 19 and Loris Malaguzzi international centre, which have already been completed, but work in the other three buildings on Viale Massini Est and reorganisation of Piazzale Europa, on which the Techno-pole stands, as a fulcrum for traffic. Partly publicly owned and partly the property of private enterprises, the Park aims to become a centre of excellence for research at the service of the public and private sectors alike.
In view of Building 19’s value as an architectural, historic and cultural heritage site, Andrea Oliva has adopted a philosophy centring around conservation and functional conversion of the building’s metal frame while completely eliminating its original roof, replaced by a new roof offering better thermal performance.
The project reclaims a truss structure considered a heritage building, composed of a central nave, originally used for handling materials with conveyor belts and overhead cranes, and two side naves that contained the voluminous production lines. Freed of the signs of time and deteriorated materials, this metal skeleton re-emerged as an architectural fossil on a spectacular scale, the boundaries enclosing an empty space with plenty of potential for different uses in which the renovation project creates flexible self-supporting spaces.
Distinguishing the content from the container, in the same way that furnishings are separate from the building that contains them, the interiors are structural modules made of solid wood in layers which are crossed over, insulated and filled in with OSB and sandwich board panels. Of different sizes, divided over three levels under the central nave, they overlook a covered “plaza” to the east, to which they offer a new face with a dynamic look expressing their flexibility for use as laboratories or offices. The distinction between metal and wood also alludes to the differentiation between old and new, between permanent and temporary. Over this big empty interior space, the boxes alternate infill walls with tall windows and patios with railings, like an ideal street front. A new axis, off-centre with respect to the main entrance and the ridge line of the roof trust, acknowledges the geography of the strip of train tracks which run right across the production area and preserve the view of the building’s entire height.
The structure is completed on the outside by the continuous façades of foyers and meeting rooms or utility volumes of sanded concrete which stand out as separate and cannot be confused with the original structures. With a view to restoring the manufactures as testimony of their times, the project also incorporates conservation of the graffiti art by Blu, now an integral part of the northern and southern walls. 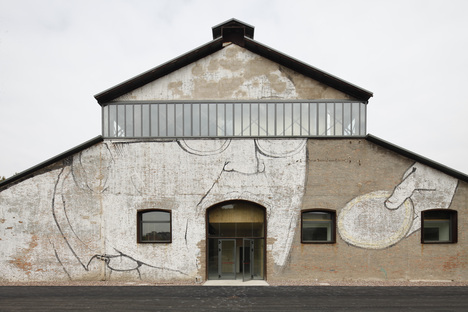 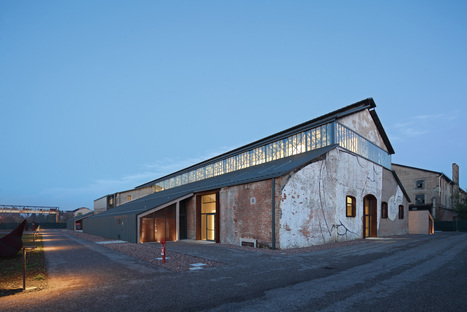 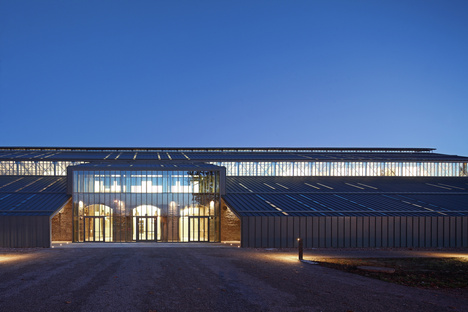 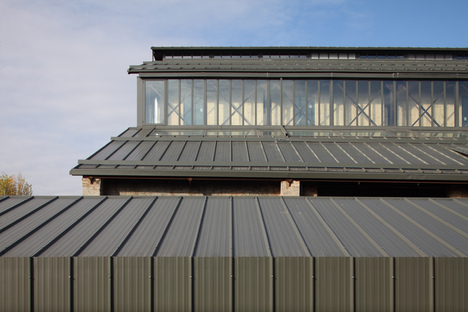 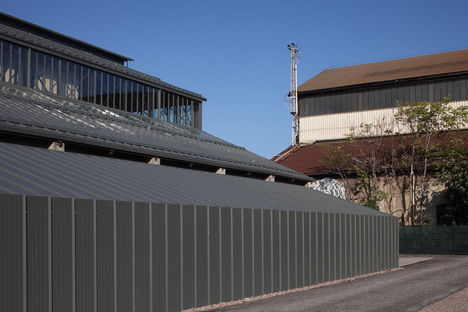 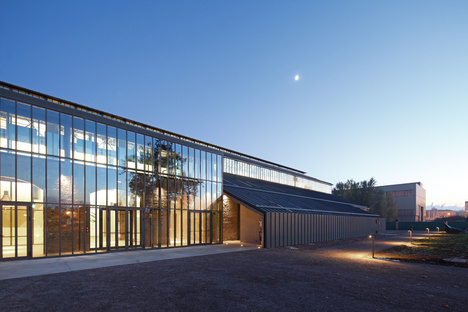 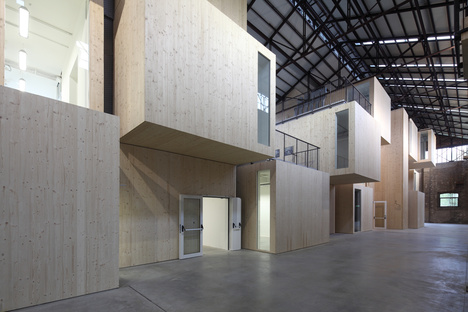 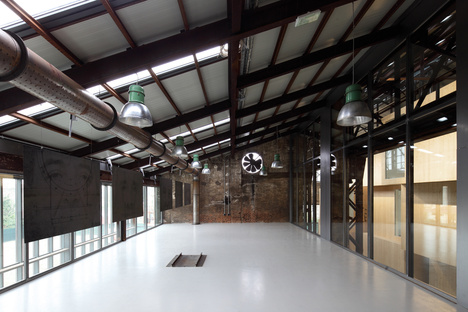 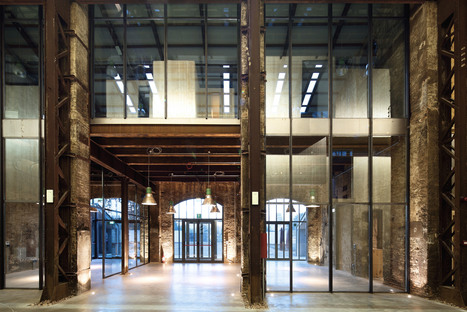 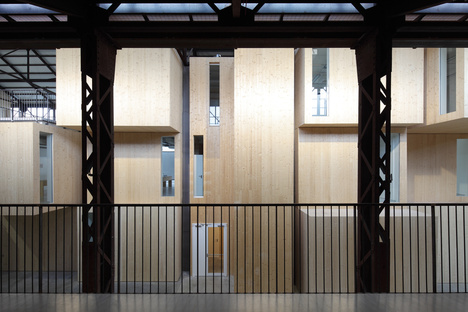 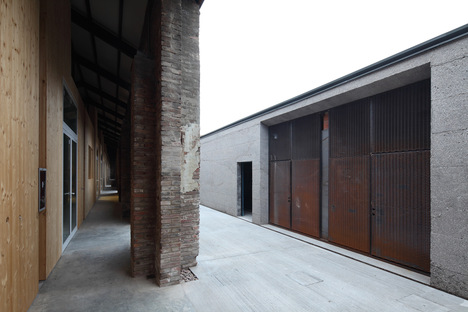 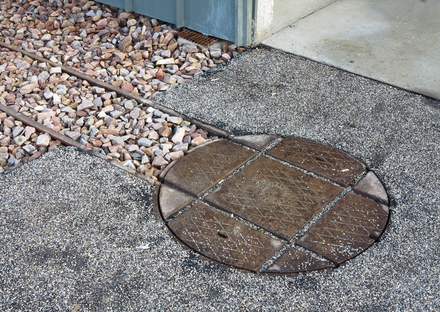 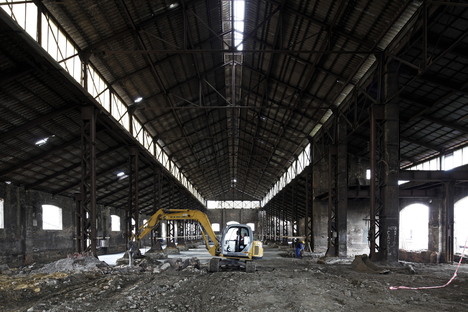 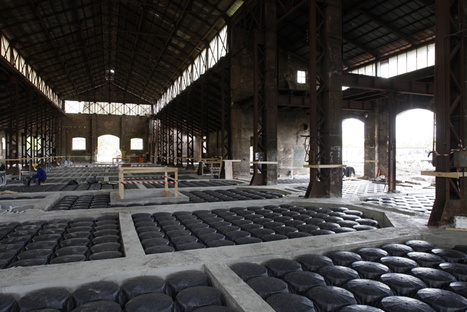 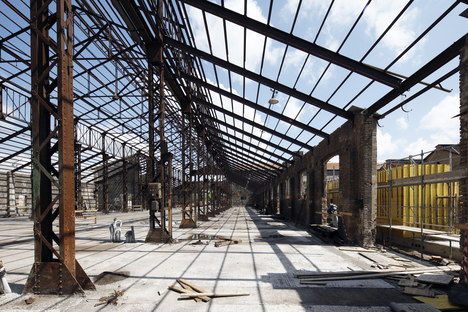 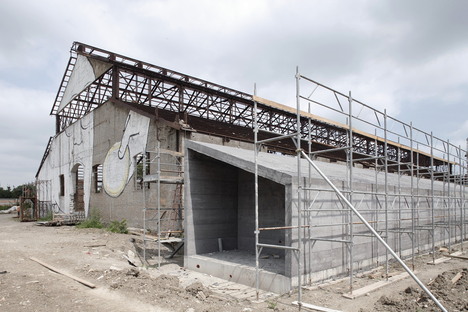 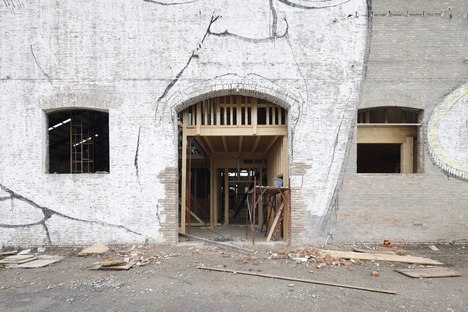 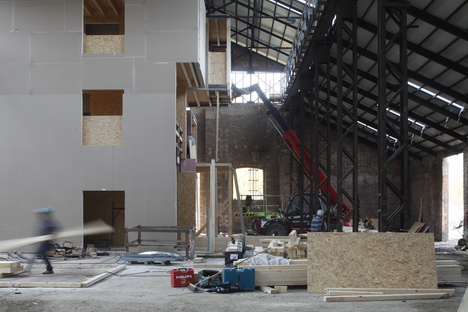 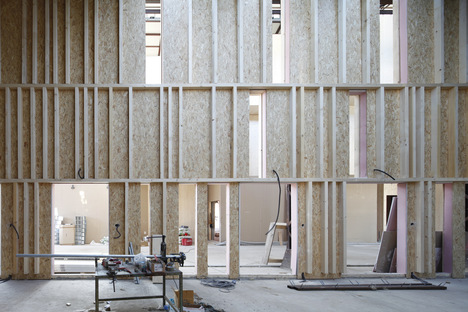 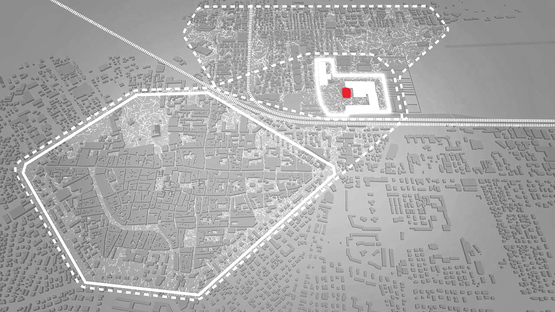 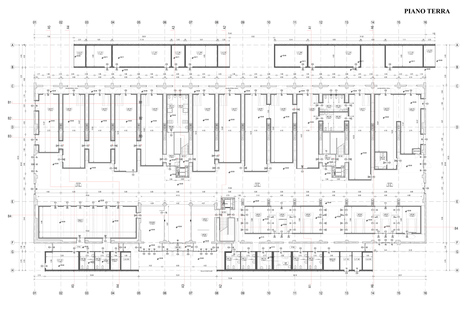 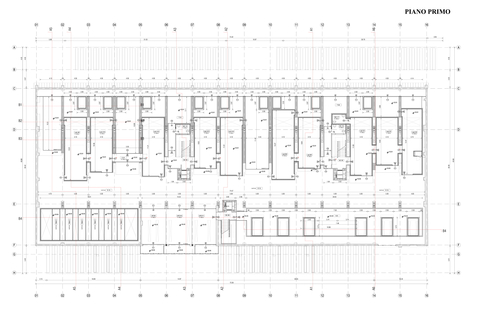