Thanks to a project by Taller 9s, the demolition of the old Cal Xerta paper mill - a defunct, dilapidated factory in Sant Pere de Riudebitlles - was avoided, replaced by the idea to set up an interpretation centre for paper, a traditional trade linked to the valley of the River Bitlles. 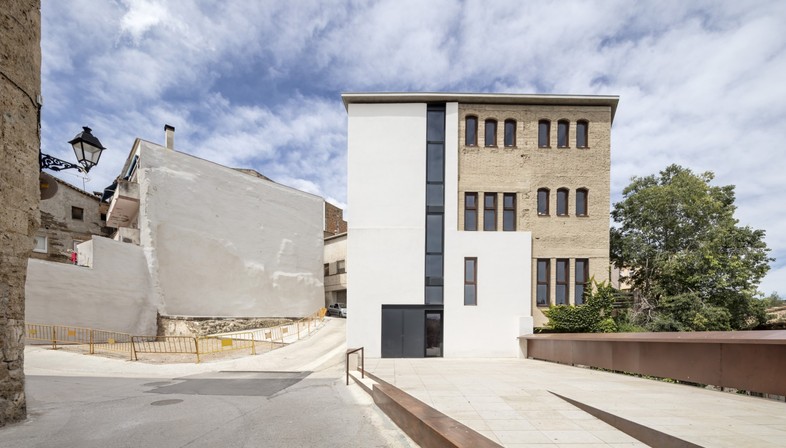 In Sant Pere de Riudebitlles, an old 18th-century paper mill was the focus of a master plan promoted by the Diputació de Barcelona, the provincial council of the Catalan capital. The project was headed up by Taller 9s, commissioned in 2013 to restore Cal Xerta - formerly a paper production facility which had long fallen into disuse - and its surrounding area. An impressive 30 workshops operated in the Riudebitlles area, with 12 in Sant Pere alone, some of which are still active. Dating back to the early 18th century, the mill is a four-storey building located on the carrer de Baix which, despite its structure being in ruins, has preserved within it the machinery historically used to produce paper in the area. The aim of the architectural restoration was to make it into an art and interpretation centre for the paper industry, with all its associated tradition.
The course of the River Bitlles literally embraces Sant Pere de Riudebitlles, a small village of around 2000 inhabitants, and its riverbed is home to the building known as Cal Xerta, in a setting of great interest in terms of its heritage and its spectacular landscape. ??As can be seen from the historical photos, however, the site was in an advanced state of dilapidation, prompting the city’s administration to extend the intervention programme to the neighbouring area in order to repurpose it. A project that is an integral part of an overarching strategy to revitalise the historic urban centre of Sant Pere de Riudebitlles, at the heart of which lies the river, not only as an element of the surroundings, but also as a propulsion system for the village’s industry and economy throughout history. Indeed, various settlements sprung up around the river over the years, remaining hidden and unused due to a lack of maintenance, before the urban redevelopment master plan of Barcelona-based firm Taller 9s breathed life back into them.
The works were divided up into three successive phases, the first of which involved the building’s overall structural consolidation, completed in May 2016. The rooves were completely rebuilt, whilst the staircases were designed from scratch; the slabs were reinforced in order to provide them with stability and safety, thus preparing the building to meet the requirements for the new programme. A second phase saw the restoration of the façades, along with the development of various renovation and fitting projects for the interiors, making it suitable for its new life as an interpretation centre. The final stage, concluded in January 2019, was the creation of a public square, la Placa del Terraplè, made to overlook the river, and the redevelopment of the riverbed.
The first consolidation stages involved adapting the ground floor and two basement levels where the old workshops were located. This operation allowed the team to construct a vertical distribution core - which did not previously exist - in order to connect the four aboveground floors with the two underground ones, thus facilitating the museum tour project.
According to the architects, this project adopted an approach of minimal action with a view to respecting the heritage of industrial archaeology as much as possible, all whilst maximising the building’s safety, roominess and energy efficiency.
As we can read in other projects such as the Cultural Centre in Sant Sadurnì or the functional requalification of the former Bella and Bernades tanneries, in the Rec area in Igualada, Taller 9s pays a great deal of attention to the identification and restoration of the historical periods that characterise a building, emphasising them so that everybody can read them.
In the case of Cal Xerta, the different ways in which the external façades were treated explains how the building has grown over the course of its history. The oldest part of the mill has an eco-friendly covering made from lime and cork which brings out the interior walls. On the other end of the scale, the most recent part of the building - dating back to the mid-20th century - has been left bare on the outside, with a layer of insulation placed on the inside. The pre-existing windows are combined with new ones, as the result of the demolition of part of the complex.
The duality expressed on the outside is confirmed and even strengthened in the interiors. The spaces in the most recent section have been fixed with beams and vaulted ceilings to replace the old, damaged ones, whilst in the oldest section, the wooden-beam aesthetic has been respected. The need to obtain level floors has been resolved with concrete slabs. The technical ceilings, the new core with the lift, the staircases and the wooden service structures form a hybrid with the historic spaces, like superimposed objects that respect the traditional configuration of the building whilst entering into a dialogue with the existing traces of the past.
On the basement levels where visitors are guided along the museum tour, the works have been more specific and as unobtrusive as possible: a minimal railing, a new ramp covering a single step, and new lighting, all with the intention of ensuring a safe visit without damaging the expression of the memory held by the place. The walls have been reinforced without changing the state they have been preserved in until now, without being polished, as a way of highlighting the effects of time on the industrial building. The machines have been left in their original positions, as integral elements contributing to the very definition of this architectural space.
On the roof of the former workshop now stands a new square: an urban space resulting from a previous demolition which had remained unfinished, becoming a privileged vantage point overlooking the river as a conclusion to the museum tour. 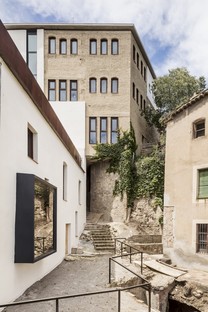 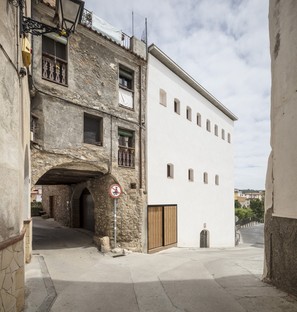 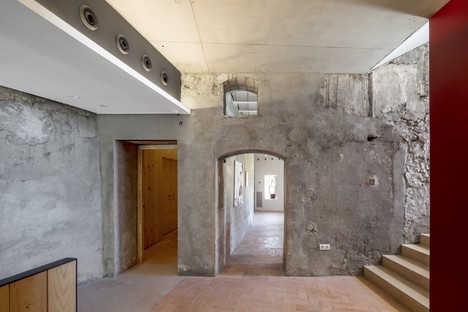 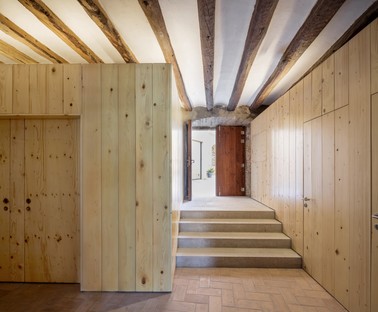 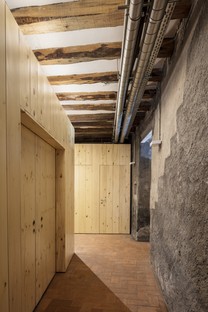 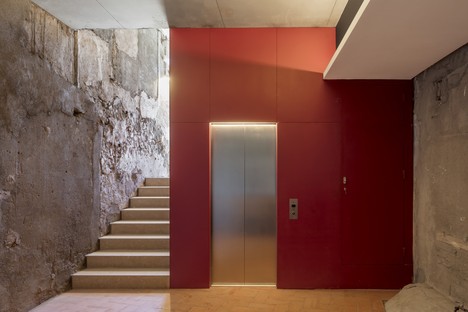 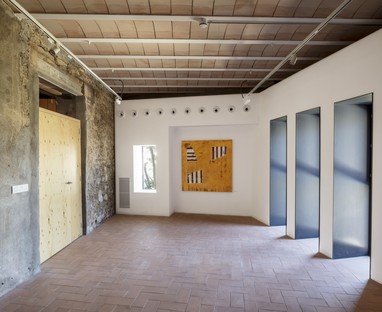 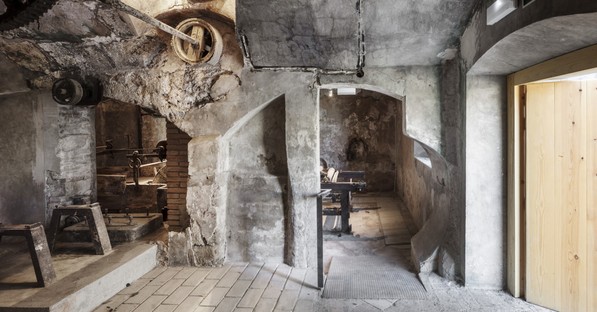 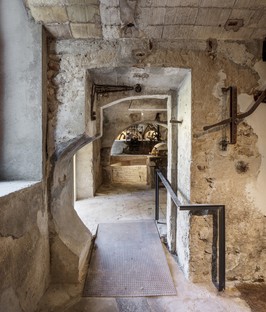 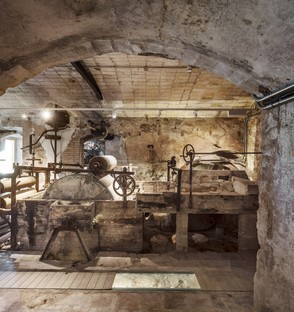 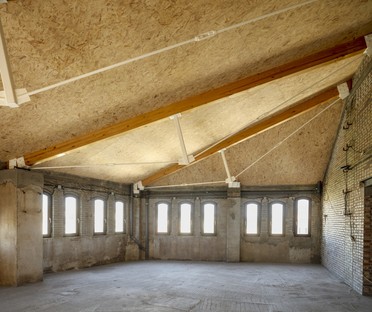 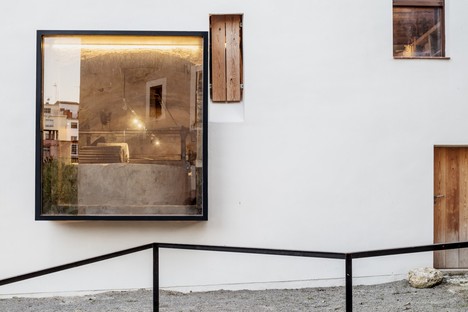 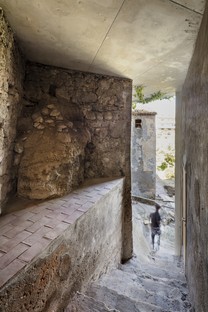 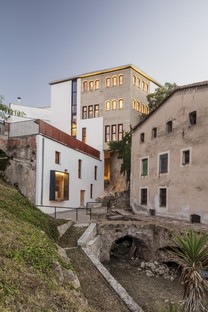 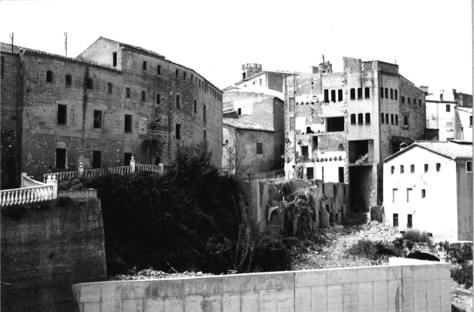 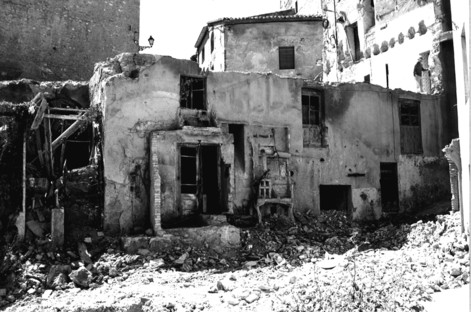 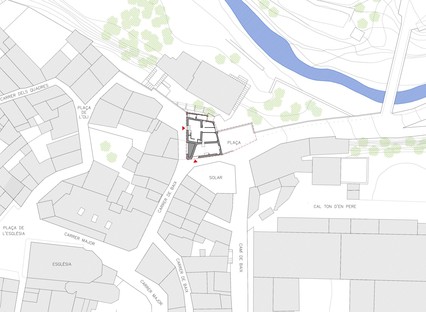 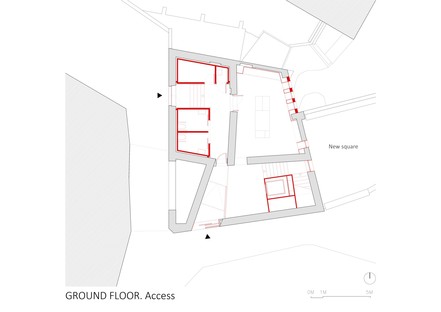 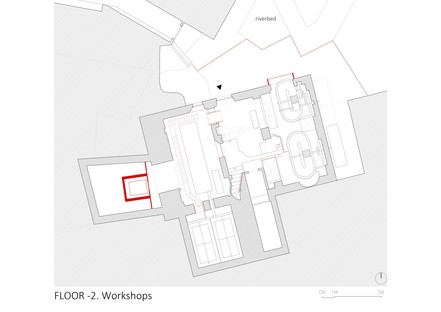 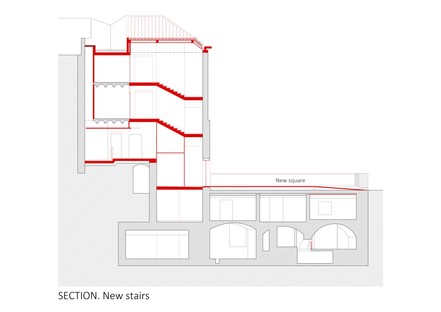