Serie Architects’ Jameel Arts Centre contrasts and dialogues with the Dubai skyline. A new art gallery with ten exhibition spaces and seven waterfront desert gardens offers a new gathering-place for the cultures that come together in the Emirates. 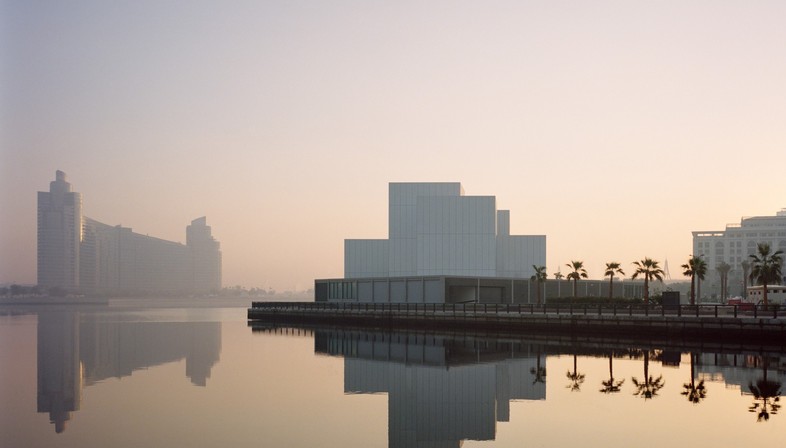 British studio Serie Architects, under the direction of Christopher Lee, completed the construction of the already famous Jameel Arts Centre in Dubai after winning an invitational competition held in 2014. Overlooking Dubai Creek, a 14 km canal around which the urban area of the capital city of one of the seven Arab Emirates is built, Jameel Arts Centre follows the coastline in its layout, symbolically embracing the earth on which it stands. This canal in the Persian Gulf, used as a natural harbour in the past, is still an important waterway travelled by vessels providing urban transportation.
In the global eye in view of Expo 2020, Dubai might be described as a record-breaking city. It has the first metro system in the Arabian peninsula, which has been in operation for about five years; in demographic terms, Dubai’s population is only 20% local, the remaining 80% coming from other countries such as India, Pakistan and Bangladesh. Hotel Burj al-Arab is the world’s most luxurious hotel, with fully seven stars, while the Burj Khalifa is still the world’s tallest skyscraper. This propensity for grandeur in all its forms seems to drive the emirate to achieve new accomplishments every year. November 2018 saw the inauguration of Jameel Arts Centre, which also breaks a couple of records: it’s the first art library in the Arab Emirates, and the first public library to open in Dubai.
The building is broken up into multiple parts reaching out towards the water, forcefully revealing its shiny white metallic cladding in a clear statement of intent: to be a cultural centre with a broad horizon, encompassing the entire world and potential new audiences, even in very different cultures. Acknowledging the city’s multicultural and multiethnic component was of vital importance in the project, according to Antonia Carver, director of Art Jameel, an independent organisation supporting art, education and cultural heritage in the Middle East which supported the Jameel Arts Centre project. This inspired the architects of Serie to come up with a project which has a clear vocation for openness, dialogue and sharing with the city, on one hand, while remaining deeply rooted in historic local architecture on the other.
As the architects confirm, the inspiration for the project’s spatial layout comes from Arabian houses in the Sha’abi (popular) tradition in the medina, made up of a series of spaces arranged around an internal courtyard which provides light and air. The layout of the Jameel Arts Centre alternates indoor spaces with gardens, with floor-to-ceiling windows establishing a relationship between the two. The white walls of the exhibition halls are continually broken up by glimpses of nature, in the nearby gardens and the distant creek, establishing different levels in visitors’ processes of contemplation.
In another way, but still pursuing the philosophy of stratification, the white box of the art gallery which inspires the centre incorporates 10 spaces, 10 art galleries of different sizes with big windows over the seafront of Al Jaddaf, the new Dubai and the towers typical of its skyline.
The resulting comparison is destabilising and almost provocative, because the Jameel Arts Centre doesn’t appear to have anything to do with its surroundings. The goal is to return to the concept of a community collected around a public cultural space, seeking its historic roots even as it proposes an innovative social concept. This voyage through memory can also be travelled through the seven desert gardens, a project by famous Swiss landscape designer Anouk Vogel, who included 33 species of plants from all over the world representing specific local and global desert biomes. These include endangered plants facing loss of habitat that have been saved from sites marked for destruction, such as a sesame bush estimated to be 220 to 300 years old. “Plants grow according to geological and climatological borders, not political ones. Drawing connections across the globe, the individual gardens are inspired on the world’s major deserts,” comments the landscape architect.
Seen from the outside, the structure is entirely surrounded by a colonnade establishing an interface between the private spaces of the gallery and the waterfront, inviting passers-by to come in. Its big windows stand out in a concrete structure clad with semi-reflective aluminium panelling, with a severe look but forming a dynamic skin that responds to changes in the weather. We may glimpse the internal courtyards in the shade of the volumes, positioned to provide ventilation. 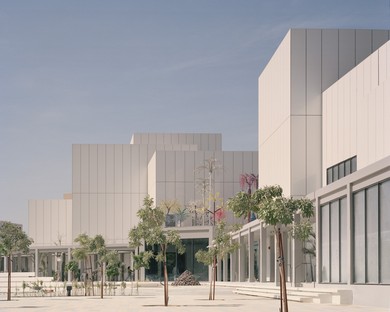 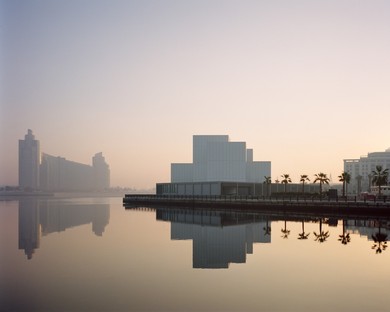 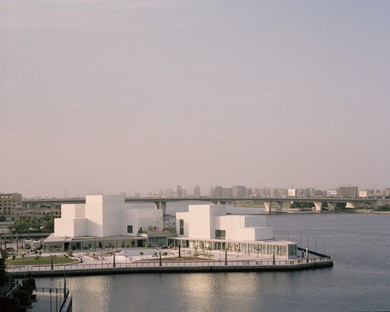 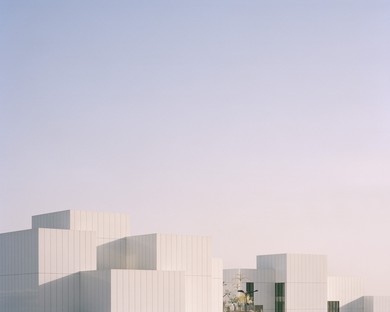 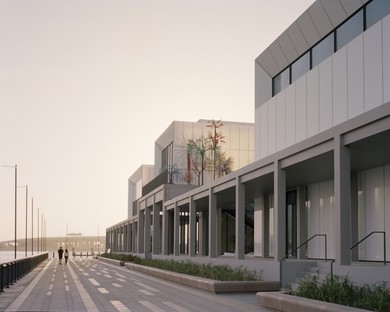 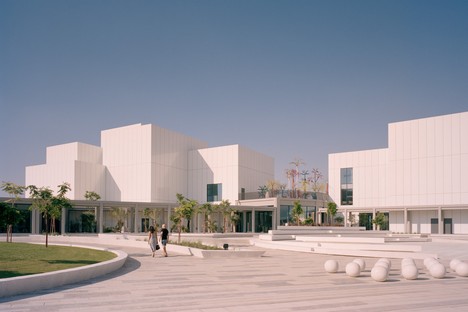 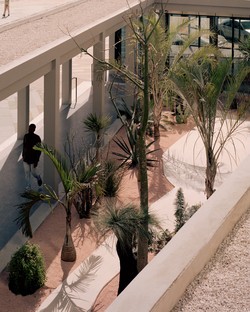 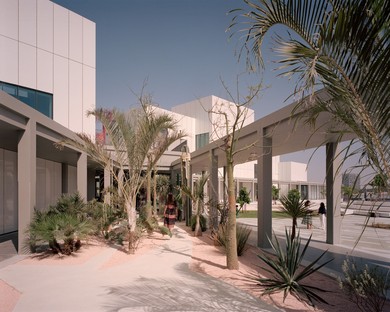 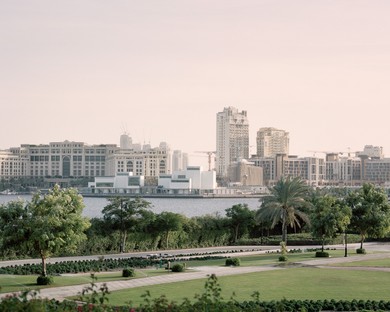 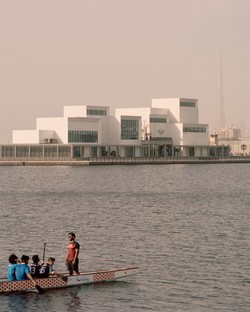 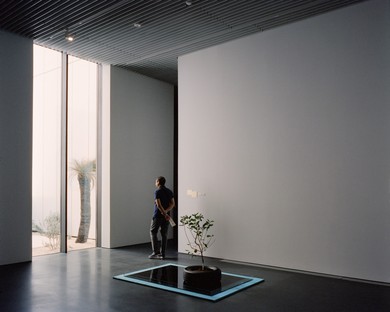 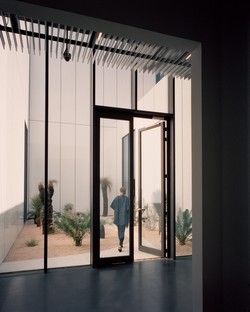 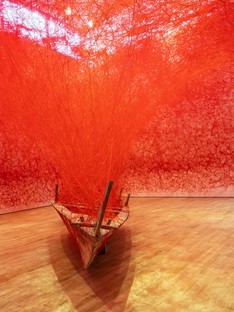 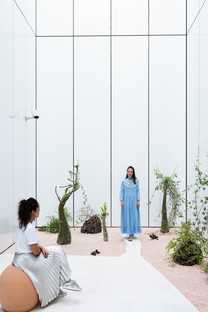 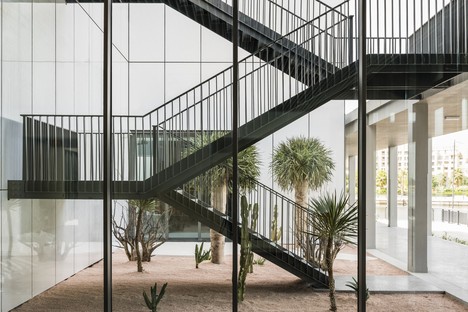 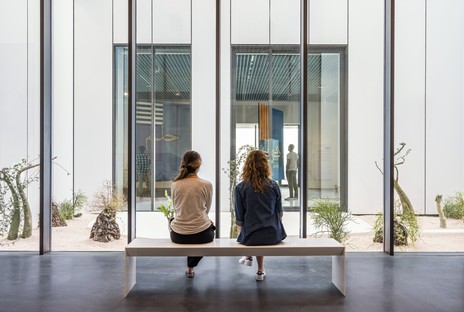 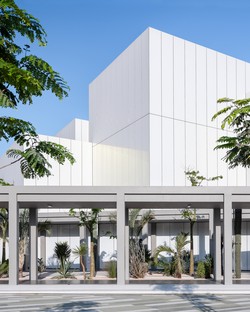 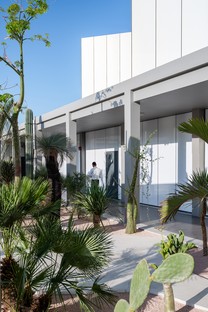 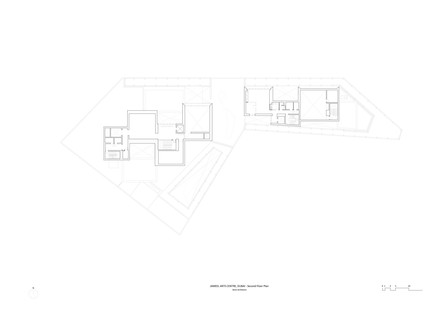 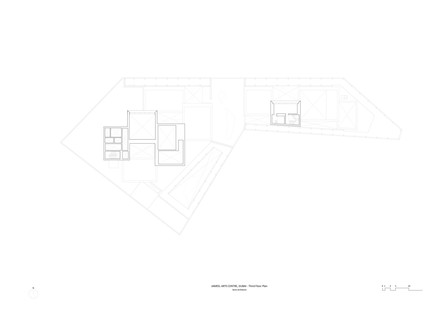 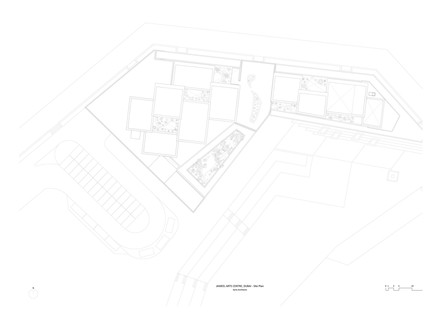 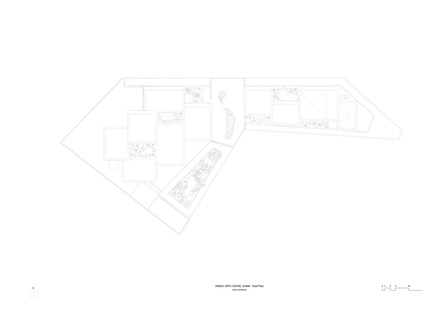