Ludwig Godefroy’s Casa Mérida is an experiment in energy self-sufficiency and a “habitable garden” in which to experience a new and more complete relationship between indoors and outdoors, in which the history of the Yucatan Peninsula plays an important role. 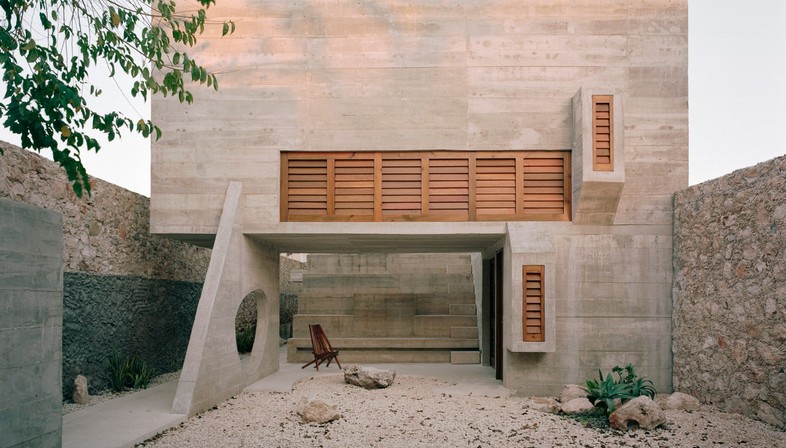 Ludwig Godefroy, who designed Casa Mérida in the capital city of the Yucatan Peninsula, says that he approached the project with the goal of liberating new architecture from the dependency on energy characteristic of recent constructions. Mérida has a hot climate year round, with temperatures of up to 40°C in May and very high levels of humidity.
There is a growing conviction that architecture must evolve toward a more self-sufficient model of building, using passive resources and materials and labour that do not have a high impact on the environment due to lengthy transportation. Mexican architect Ludwig Godefroy comes up with an interesting reflection on this theme, seeking a solution in the history and architectural traditions of his country, that is, in the way people built their homes before new developments such as mechanically induced cooling became not only the norm, but an essential part of urban life.
Mérida is a big city balanced between the architectural lexicon of the Spanish, who founded the town in the sixteenth century, and that of the Maya. According to Godefroy: “In spite of the fact this civilisation disappeared long time before Spanish people arrived, Mayan people and languages always survived and still exist today, which always made this region very unique and different than any other in México; a sort of small country within the country, with its own way of thinking.”
In this new home on a lot not far from Plaza Grande, in the city’s old quarter built in Colonial style, the architect has traced and brought up to date the vernacular features of which he refers to as a sort of “tropicalised colonial style”: an alternation of solids and hollows, of patios and rooms stimulating the natural flow of air by releasing hot air. This design tool is both an ecological strategy and a reference to what the inhabitants of Mérida can see with their own eyes in the landscape of the Yucatan.
Because of the conditions on the lot, wedged between the other buildings like a narrow alley only 8 metres wide but 80 metres long, there are parallels with a traditional element of Mayan architecture, the “Sacbé”, literally meaning “the white path”: a sacred path connecting the monuments of indigenous culture, such as the temples, plazas, pyramids and cenotes of a city, in a straight line. In Casa Mérida a sacbé was created using the perspective dictated by the shape of the lot, from the entrance hall to the end occupied by a large swimming pool. 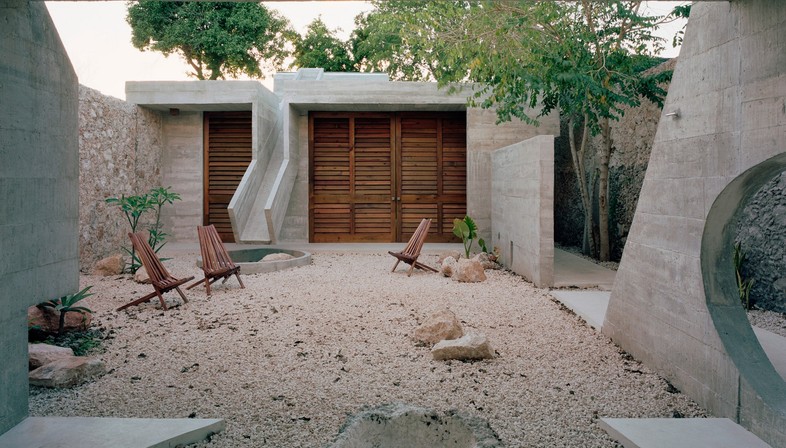 Parallel to the boundary of the lot, identified by a wall of concrete and roughly hewn stone, runs a second wall cleanly dividing the house into two parts, with a perspective path on one side which also serves as an access corridor and various rooms on the other. The wall is not only an element of this composition but the structure supporting the concrete slabs in the roof system; lastly, its shape is perfect for spontaneous circulation of air.
Beyond this axis are what are referred to as the “indoor” rooms, though they are not truly indoors: one of the legacies of tropical architecture is the alternation of covered and open spaces, where the boundaries between the two are never truly clear, so that they flow into one another like fluids, freely tracing a path. “The purpose of this house is to make disappear our urban daily references from México city, where we live behind our large glass window apartments, to foment an outdoor life, in which the house is breaking the basic concept of the façade; the house does not enclose people, it stays open and breathes permanently, while providing the essential feeling of protection and privacy. Casa Mérida is inverting the classical scheme of the house with its garden, to create a singular habitable garden with its house,” explains Ludwig Godefroy.
The influences of Mayan culture also emerge in another key area with respect to sustainability: the surface finishes. The original architecture of these areas, long before colonisation, is rediscovered in the project, influenced by the beautiful bare stone of the Yucatan that was used to build the famous Mayan temples we see today. In the house, stone is combined with natural concrete, both left untreated and brutal, in the style typical of Mexican architecture of recent decades. This has the advantage of not adding to the environmental impact of the construction with additional layers of materials such as paints. And these materials gradually acquire the patina of time, transforming in symbiosis with nature to design a new landscape. “The brut concrete has also been used for the floors and the walls, definitely industrial but still locally produced in Mérida, the main structural material. Finally, to control the light atmosphere, massive wooden louver windows and doors have been designed. The construction is reaching a 90% made on site, with local materials and built exclusively by yucatec masons and carpenters, a sort of modern reinterpretation of what could mean vernacular architecture” concludes Godefroy. 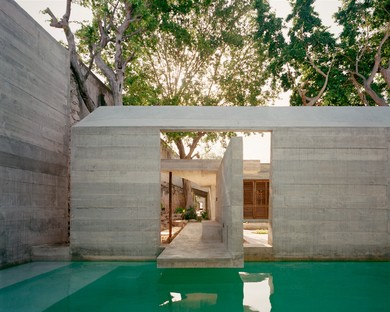 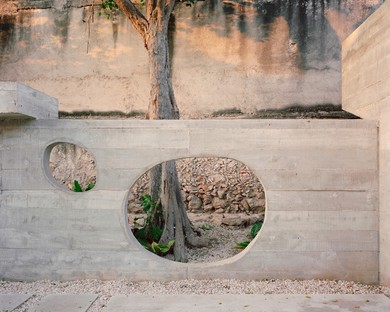 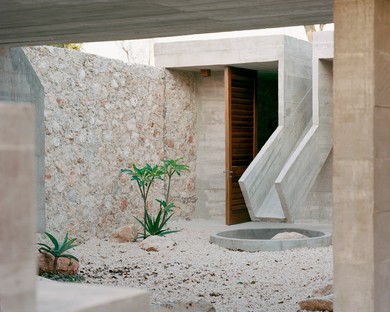 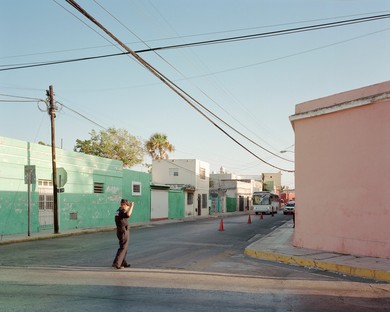 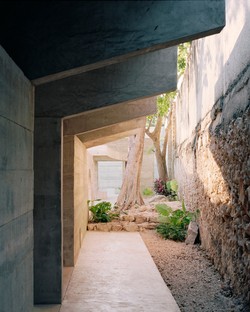 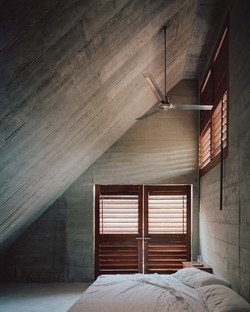 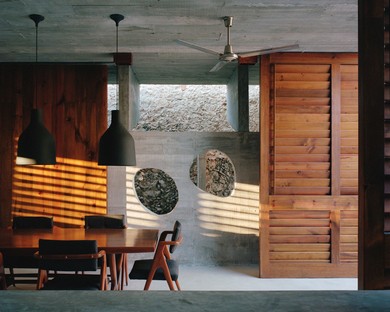 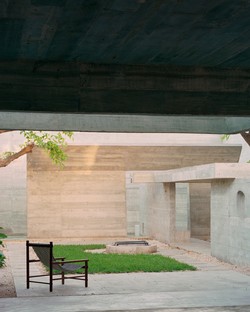 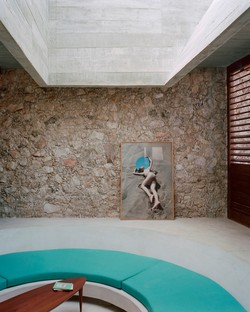 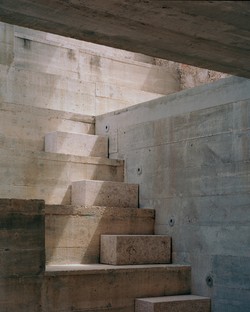 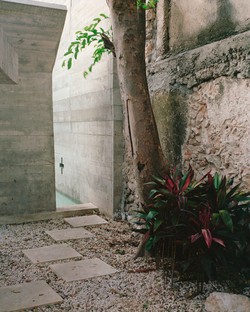 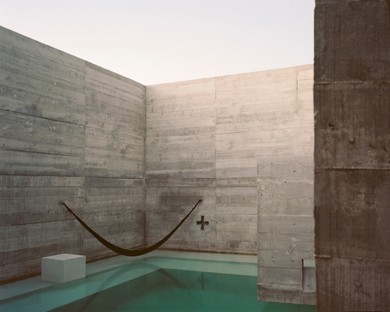 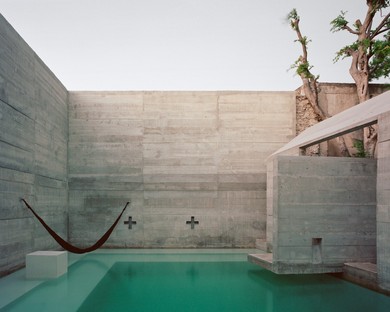 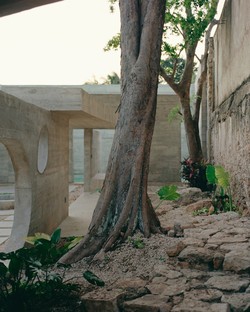 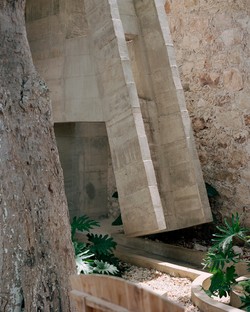 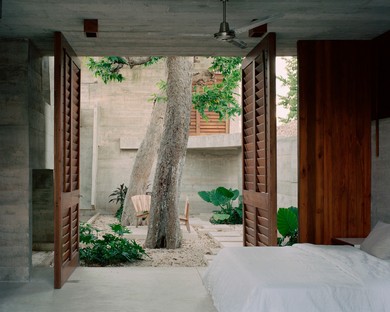 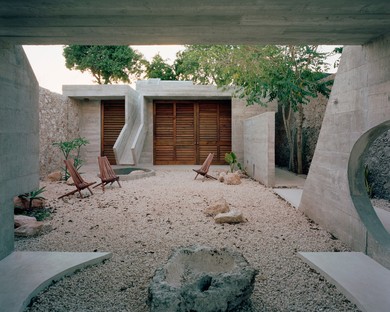 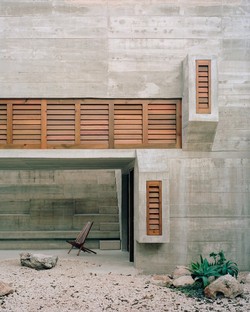 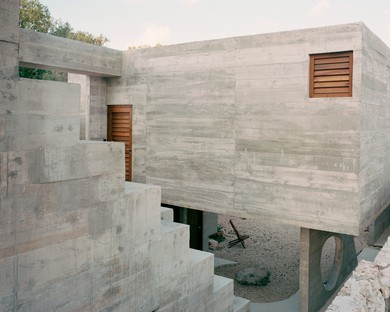 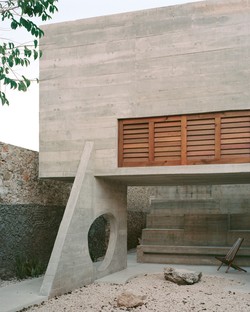 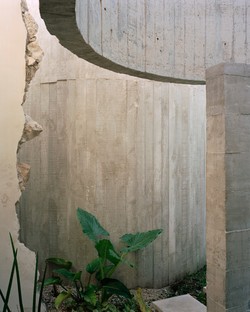 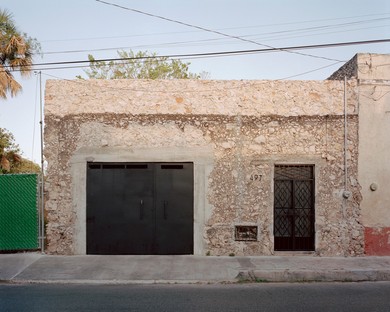 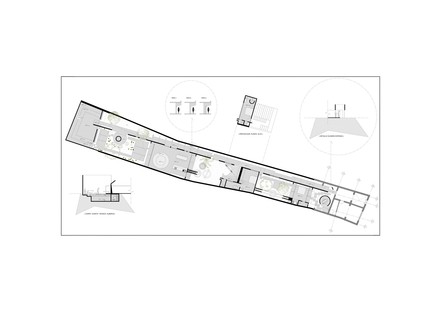 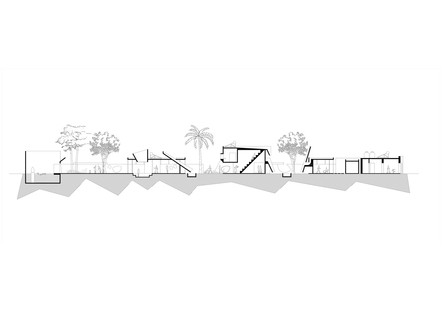