RB12 of Triptyque and the renewal of Rio de Janeiro

Urban renewal and green retrofitting are the keys to Triptyque’s RB12 project in Rio de Janeiro. Triptyque’s RB12 office building in Avenida Rio Branco is part of the “Porto Maravilha” project commissioned by the City of Rio for the 2016 Olympics. 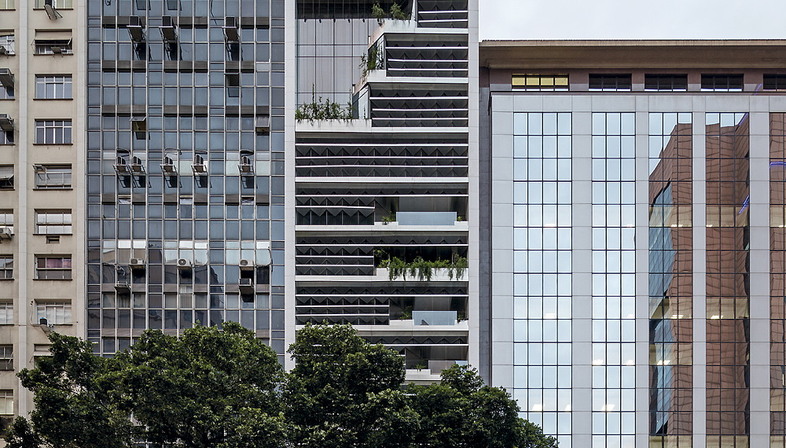 RB12 is the abbreviation identifying sustainable redevelopment of a building constructed in the ‘70’s on Avenida Rio Branco in Rio de Janeiro, now transformed by a group of architects and companies led by studio Triptyque.
The building in Avenida Rio Branco, a central street leading from the port to the centre of Rio, had suffered from natural structural and stylistic aging over the years. Natekko, a French real estate developer specialising in office buildings, came up with an alternative to knocking the building down with the aid of Triptyque, a studio which has come up with several sustainable architecture projects in the city of San Paolo over the years. One recent example is the conversion of the “Minhocão" raised road under the urban development plan for San Paolo, to which Triptyque contributed a renewal project with plenty of greenery on the lower part of the big infrastructure.
The “Minhocão” and the old office building in Avenida Rio Branco are symbols of an obsolete form of Modernism which demanded renewal to prevent the tabula rasa effect and the emptying out of the city centre. The City of Rio offered the right opportunity in the context of preparations for the Olympic Games of August 2016, in the “Porto Maravilha” project, which also included the RB12 building. The priority projects in preparation for the Olympics identified by the City of Rio de Janeiro included urban redevelopment of the city’s port and nearby areas, a total of about 5 million square metres, with investment of about 8 billion Reais (approximately 3 billion Euros, according to the Italian Embassy in Brasilia).

The road was not harmed in any way, but Triptyque worked on RB12 through well-known processes of ecological renewal such as Green Retrofitting, a combination of different processes aimed at improving energy performance, the durability of existing buildings and the inhabitants’ quality of life. According to the architects, Brazil now has its first commercial building that is not only self-sufficient in terms of energy use but can produce extra energy for sale to the electricity grid.
BDSP analysed solar light, thermal comfort and use of possible alternative energy sources, and Triptyque drew on this analysis in the design of the building’s zig-zag façade, the choice of the type of glass and the orientation of sunbreaks. The old glass façade was converted into a bioclimatic wall, minimising the need for technical installations and making greater use of natural ventilation. The main façade was redesigned with green patios on all 21 floors to optimise cooling and temperature control on the inside of the building. When seen from the front, it is clear that every floor is designed differently from the others, so that the façade looks like a vertical forest, because every plant element grows freely as a unique living being.

The side walls were used for installation of photovoltaic panels, and testing the limits of Brazilian regulations prohibiting autonomous energy generation other than use of solar panels: the building is prepared for installation of fuel cells, with hydrogen cells to transform the gases produced by passing vehicles into electricity. A rainwater collection system is used to water the plants and provide water for the toilets. 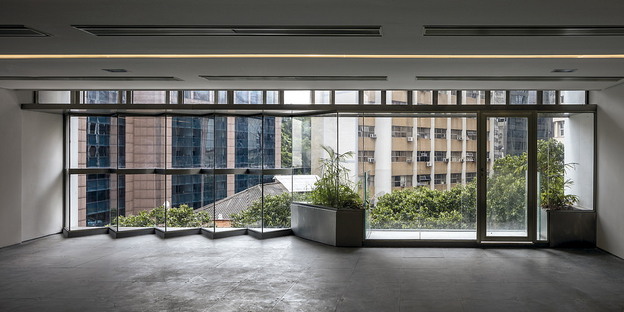 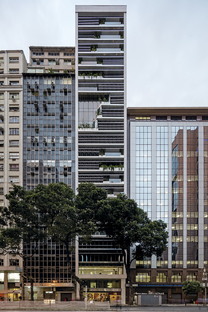 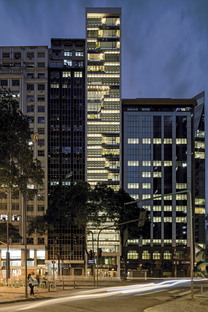 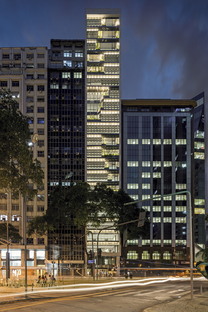 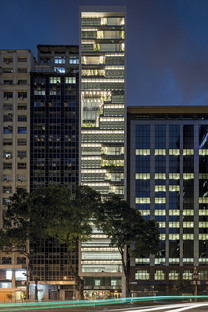 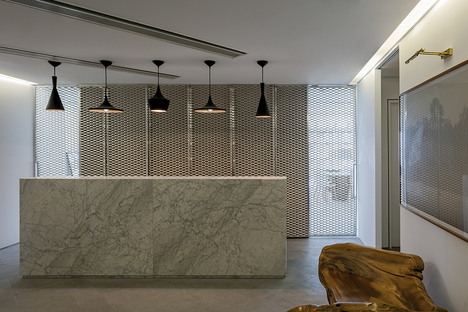 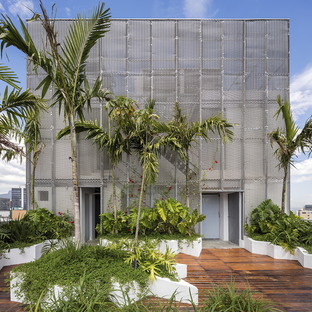 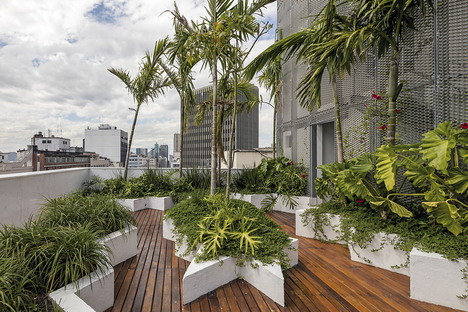 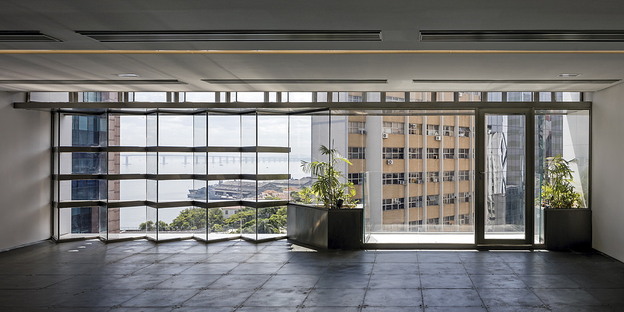 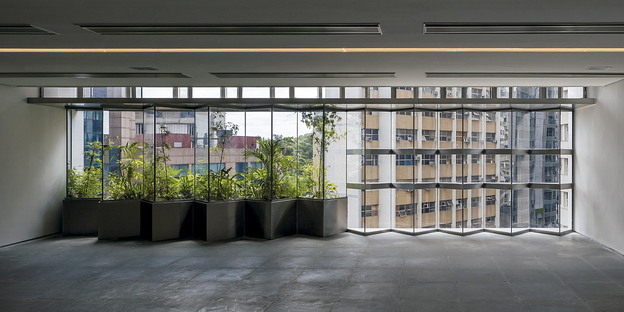 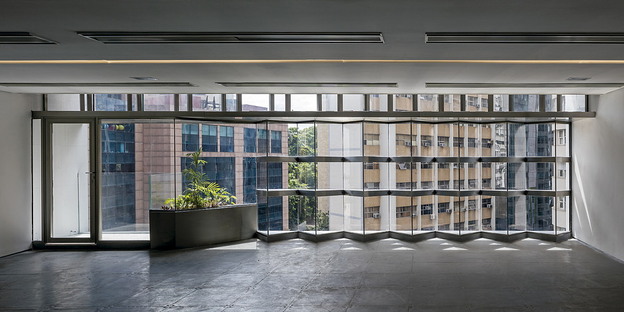 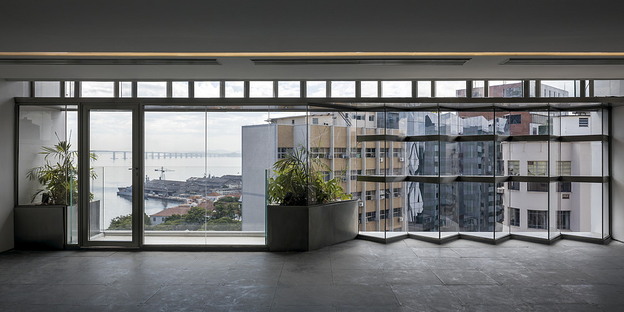 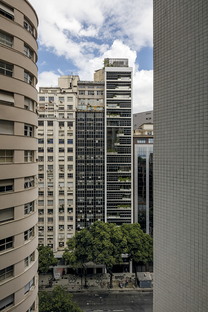 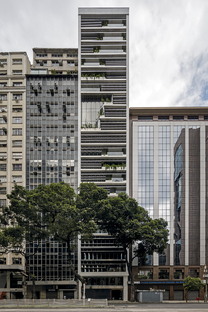 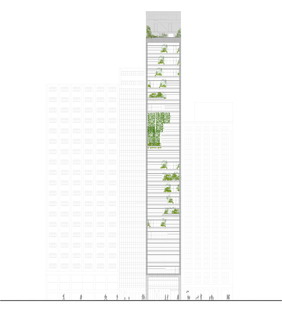 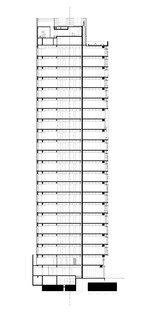 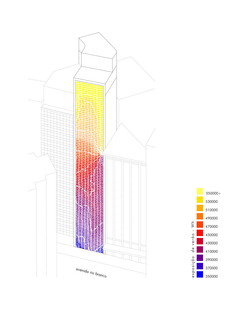