Swiss Re Next is the name of the new open space offices of the Zurich-based insurance company. Diener & Diener’s Swiss Re Next building, with its undulating glass continuous façade, was built on the site of the company’s old headquarters, constructed in the ’60s by architect Werner Stücheli, now demolished. 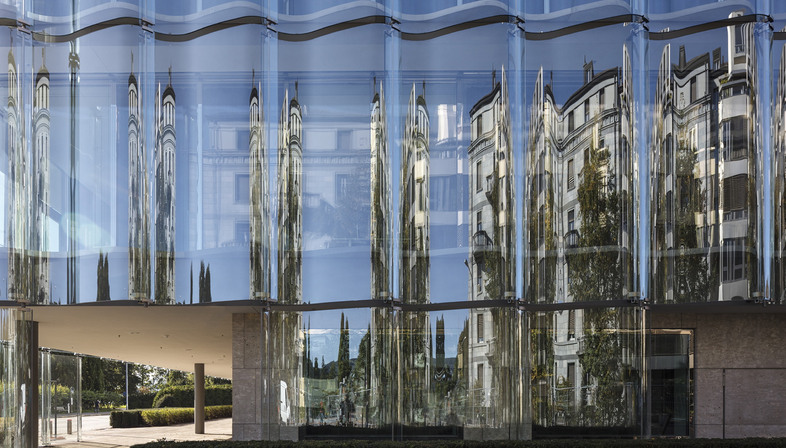 Because of the material chosen, glass, and its transparency, compared to the compactness of the other buildings along the lakeshore in Zurich, the Swiss Re Next office block designed by Diener & Diener takes us by surprise. Diener & Diener’s new headquarters for the reinsurance company Swiss Re stand like a piece of modern jewellery set in the middle of a row of six monumental buildings overlooking the lake, which have historically contained insurance offices, now referred to as Swiss Re Mythenquai Campus.
To understand the Swiss Re Next building’s link with the buildings on the western shore of Lake Zurich, we need to go back to a time when the area was considered a single unit, in the first half of the twentieth century.
This slice of land to the south of the city centre, cut out between the wooded ridge of Uetliberg and the lake, was consolidated as a green area and tourist attraction separate from the urbanised area of Mythenquai. Office buildings began to sprout up on the other side of the road, which now give the lake shore a monumental look, including Hans Hofmann’s Klubhaus (1957-1958), restored in 2000, the neo-Baroque Altbau, the initial U-shaped building of which was constructed in 1913 to plans by Alexander von Senger and Emil Faesch, and Arminio Cristofar’s 1927 Mythenschloss, a neoclassical residential and commercial volume demolished in 1982 and then rebuilt with façades exactly like the original ones, according to art historian Michael Hanak. The Neubau building was constructed in 1969 between the Altbau and the Mythenschloss to plans by Werner Stücheli, and used as Swiss Re’s administrative headquarters for 44 years, until the need became apparent to expand the size of the building and update it in response to today’s concepts of office space.
In Espazium, Michael Hanak regretfully reports the decision to knock down a building in typical Modernist style. Many examples of this architectural style still stand in Zurich, but are not given heritage status because they are too recent. Swiss Re, however, wanted to radically renew its image, turning a new page in architecture with a structure that clearly reaches out to the public and achieves great internal flexibility, with interconnection of activities. Last but not least, the new project was required to conform to Minergie-P and Minergie-ECO standards and LEED-Platinum certification.
The Swiss Re Next building is the public building in the Mythenquai campus, and its four façades of undulating glass openly declare this mission. In the 72x58 metre complex, with 6 floors above ground and 3 underground, the number of workstations was almost doubled (1,100 employees). As an open “door” to the city of Zurich, it also takes on the role of gateway to the other buildings on the campus, which are connected to it on the first level underground. Four levels are built around two glass courtyards that perforate the volume all the way to the top, on the basis of an open space layout in which the same status is conveyed. The office areas are based on the "shared desk” concept and the workstations are not intended to be customised. Each level has little lounges and a coffee shop, as well as conference rooms of different sizes with views over the workstations. Designed to be boxes of glass, they divide the space and establish order in the layout, and, along with a variety of individual sliding spaces, create a territorial identity in the work teams’ areas.
Paying homage to the colours of the lake, the continuous façade of undulating glass generates either a compact volume reflecting the landscape or a transparent box which people can see right into, depending on the light and the observer’s point of view. Beyond the external cladding, an interior shell creates a place of mediation between the landscape and the workspace.
Using sheets with a wavelength of 2.4 metres on the first four levels and a wavelength of 1.2 metres on the two top levels, the volume is broken down into a main body and a slightly tapered roof area. In addition to maintaining a similar volume to that of the adjacent buildings on the campus, in this way the architecture of the front of the Swiss Re Next building maintains a specific relationship with the pavilion roof of the Altbau and the penthouse of the Mythenschloss. 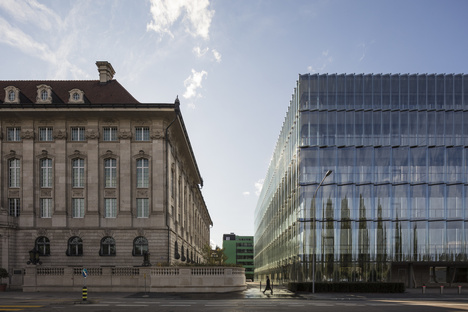 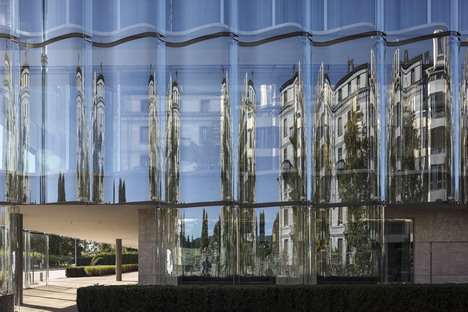 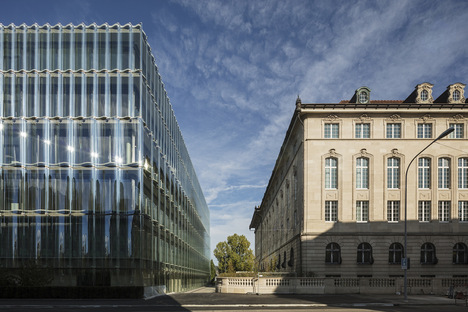 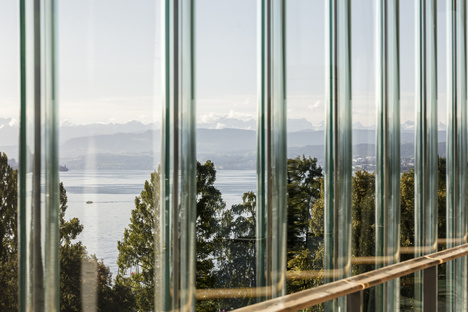 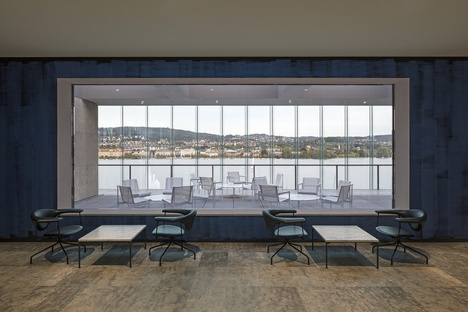 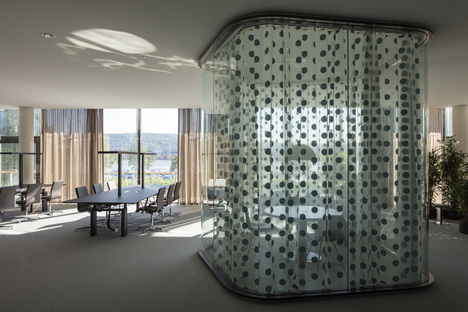 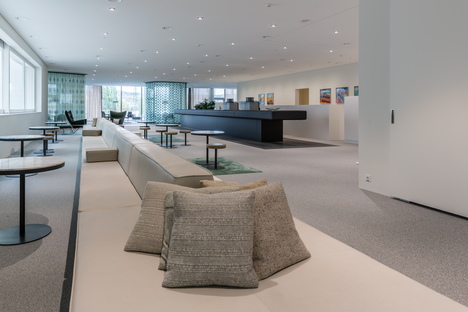 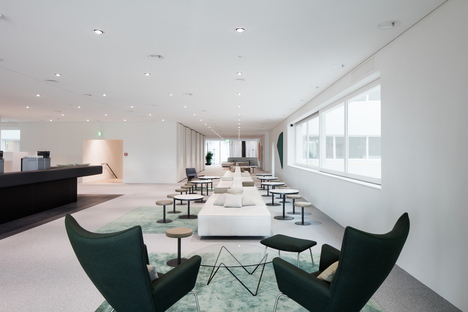 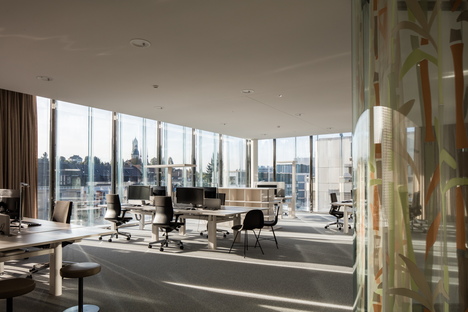 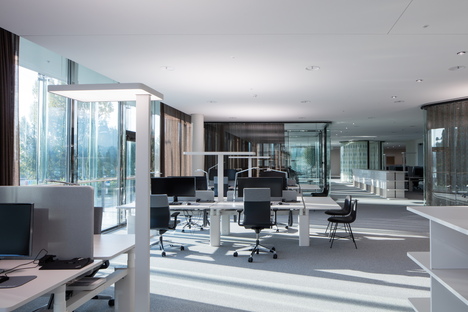 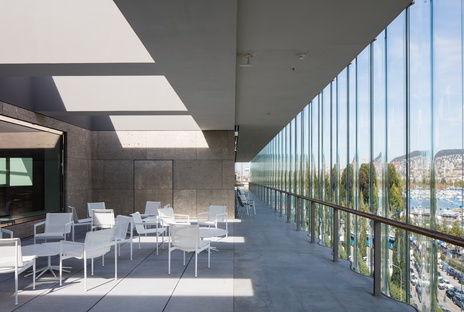 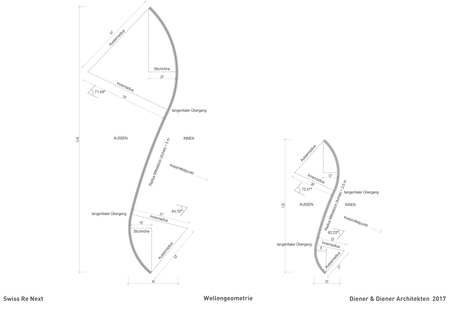 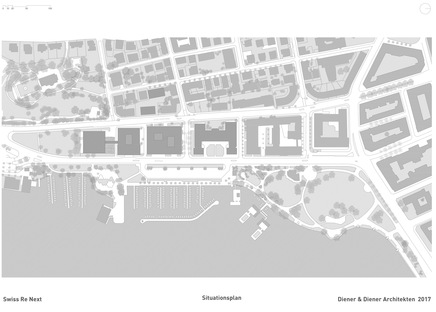 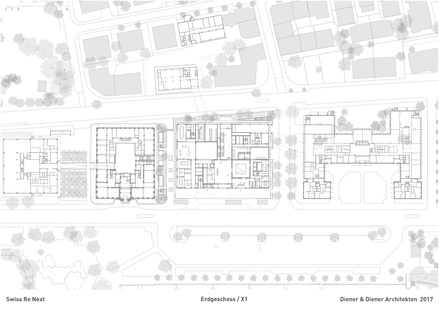 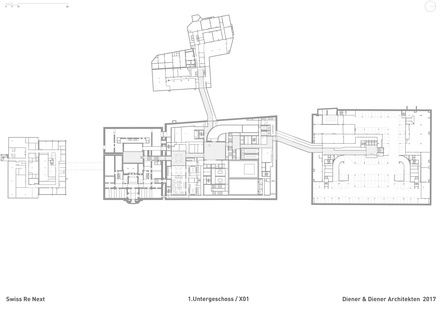 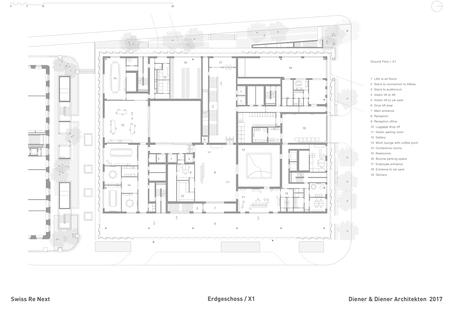 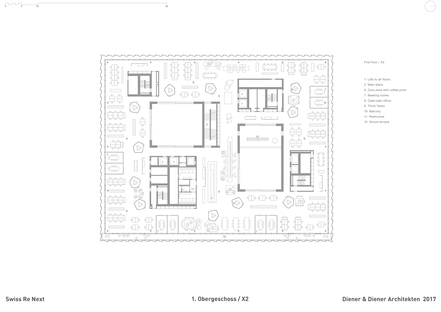 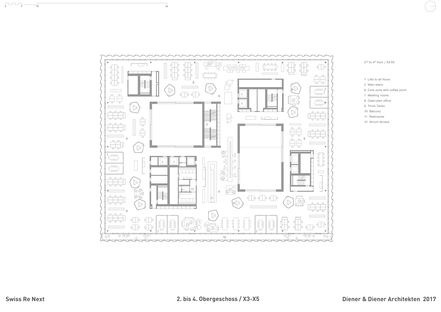 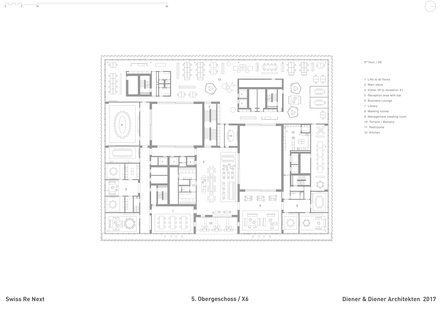 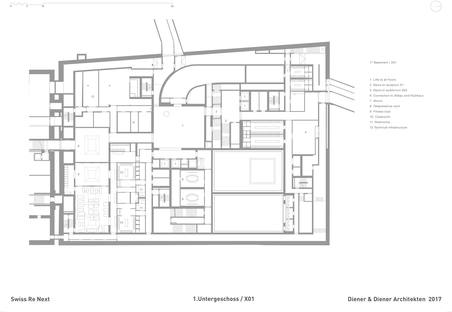 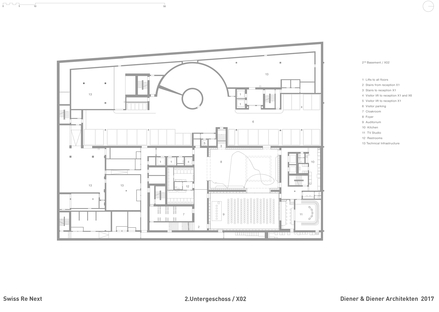 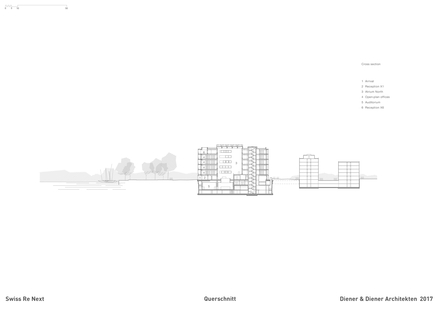 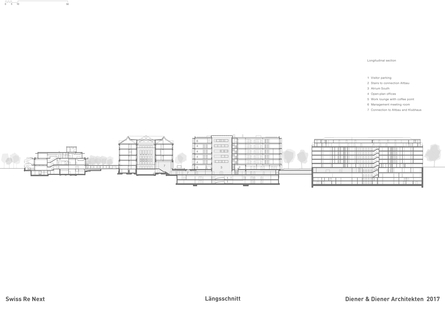 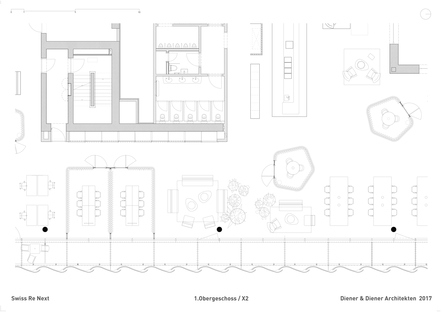 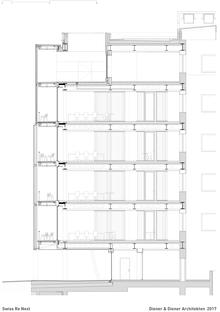 RB12 of Triptyque and the renewal of Rio de Janeiro

Gus Wüstemann: Affordable housing for the Baechi Foundation in Zurich