Giancarlo Mazzanti and Felipe Mesa have built a community centre in Medellin, Colombia which fits into a series of works sharing the common theme of a focus on social value, on the life of the city and the integration of its people. Characterised by varied repetition of a pattern, the roof is a symbol of the creative standardisation apparent in the two architects’ recent projects. 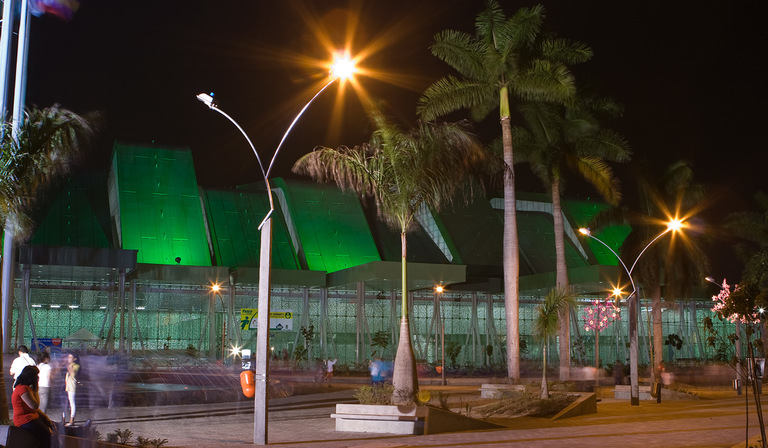 In the wake of the success and fame of his school projects, such as Flor del Campo institute in Cartagena or El Porvenir children?s garden in Bogota, in the new stadium for Medellìn, Giancoarlo Mazzanti continues his pursuit of a form of architecture which is a social movement, a means of communication with people and among people, encouraged in recent years by the government of Colombia. Looking at works such as Mazzanti?s Library of Spain in Santo Domingo, Ricardo La Rotta?s Quintana Library or the famous Orquideorama by Camilo Restrepo and Piano: B Arquitectos, both in Medellìn, we can see a common denominator in the most recent projects which not only lays the foundations of a Colombian school of architecture but makes Colombia one of the most interesting destinations for future architecture tours: using architecture to get people to come out of their homes, only too often a refuge from and antidote to delinquency and the lack of alternatives to fear and the cultural void. Architecture can be a way of encouraging people to live the big city and enjoy its facilities, cultural offerings, and the potential of its social programmes. By its nature, the building has become a symbol of the community in Colombia.
The various different episodes that have brought Colombian architecture to the world?s attention may be read as icons of a movement which is primarily social, characterised by use of local, recyclable, lightweight materials such as “bricks” in a structure with strong expressive power and a high degree of recognisability.
One such structure is the Coliseos, the latest new work by Giancarlo Mazzanti and Felipe Mesa, a multidisciplinary sports complex based on two main elements, the transparency of the structure and the formal motion of its roof. The steel skeleton is completed by glass surfaces revealing its internal volumetric composition, in the absence of a clear distinction between closed and open functions, while a decorative pattern, often present in Mazzanti's projects, establishes a constant dialogue between indoors and outdoors, allowing the complex to be transparent by day for people who want to watch the sports competitions going on inside it and transforming it into a luminous icon by night, when the lights are on, attracting attention in the neighbourhood and making it a key landmark. The roof stands out from the varied repetition of a pattern, both in its colour and in its form, so that every part of the work is unique, generating a level of disorder that seems to give the roof a life of its own, like some kind of plant organism. The metaphor is supported by the three-legged pillar structure supporting the jutting roof, giving people the sensation they are entering a stand of trees right in the city. The building is clearly inspired by nature and by the city?s two green hills, Nutibara Hill and Cerro Volador, where the people go to fly kites.
This filter space, the importance of which affects perception of the interior and the exterior, is now one of the most important places for encouraging the inhabitants to spend more time in public, in new spaces where spontaneous activities take place alongside the official sporting events. 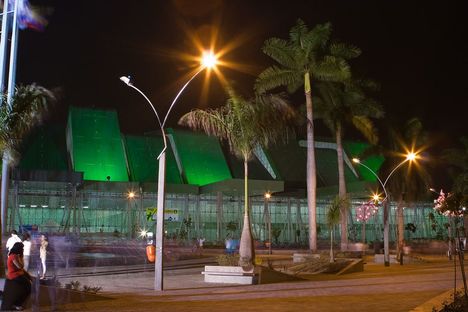 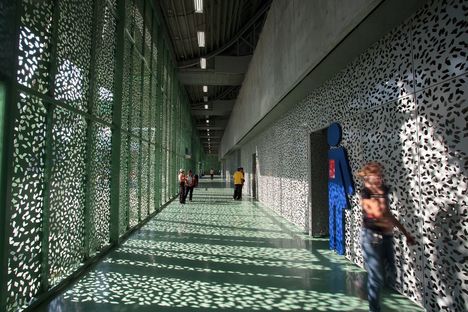 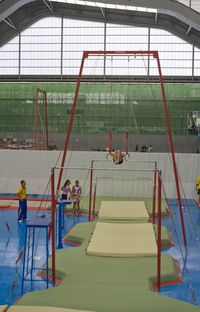 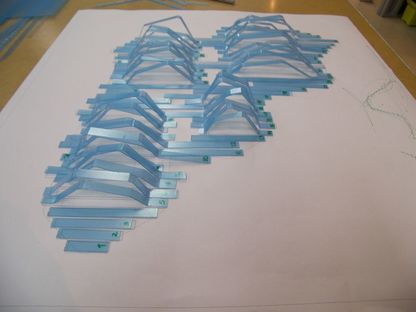 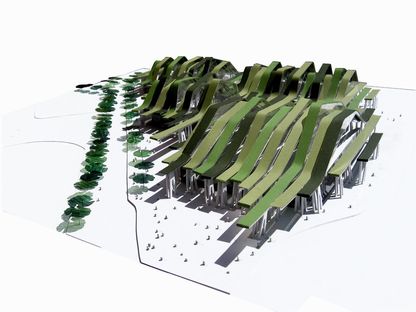 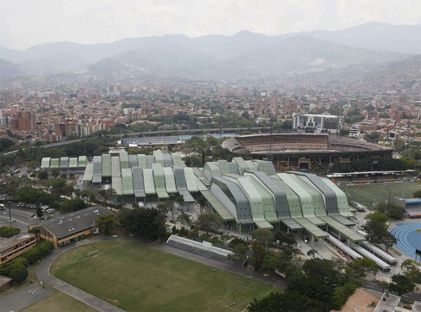 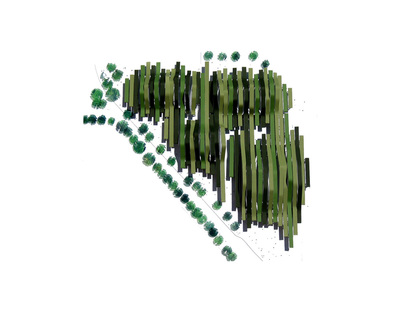 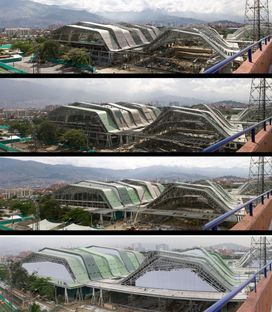 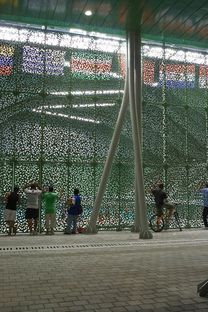 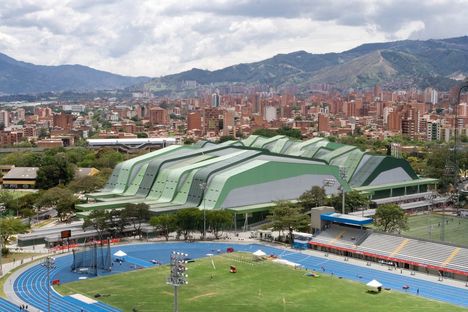 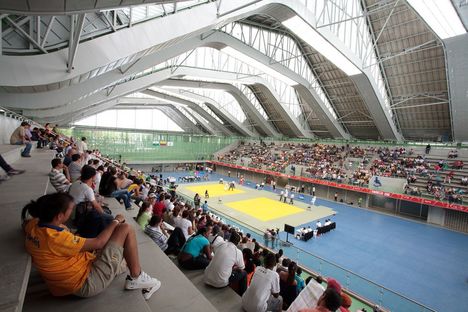 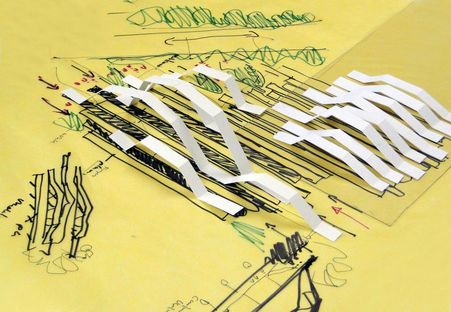 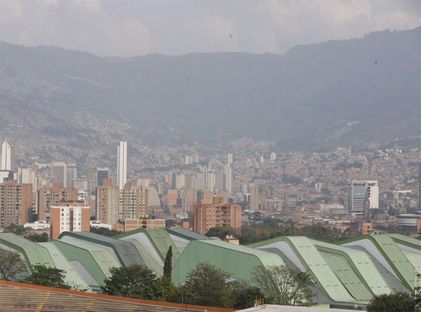 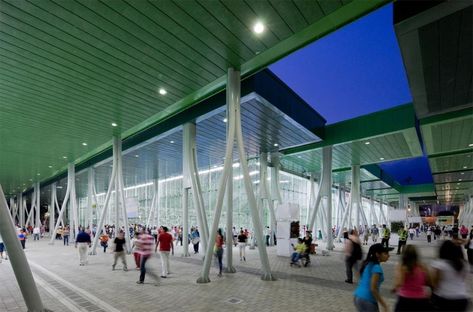 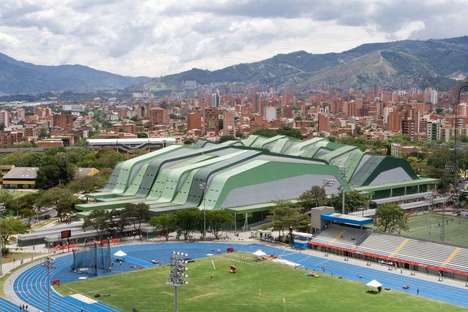 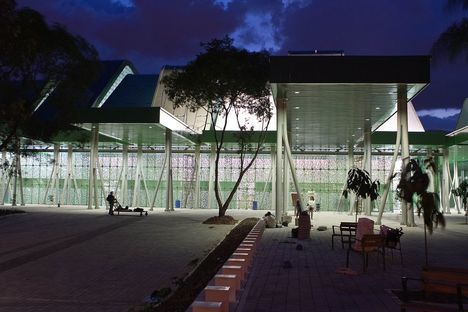 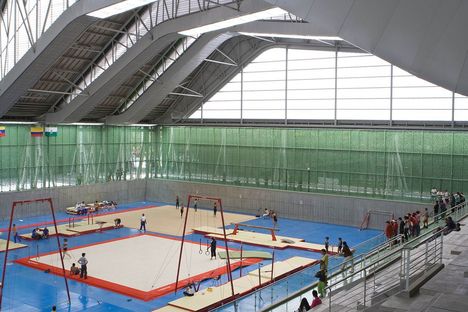 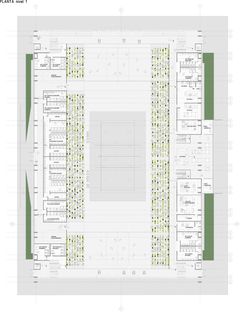 A new public school in Cartagena