The youth culture pavilion in Kazan’s Uram Extreme Park is a form of architecture that establishes a relationship with its surroundings on a pedestrian and urban scale. Kosmos + Legato Sports Architecture draw their inspiration from street culture, using the materials and forms typical of industrial constructions. 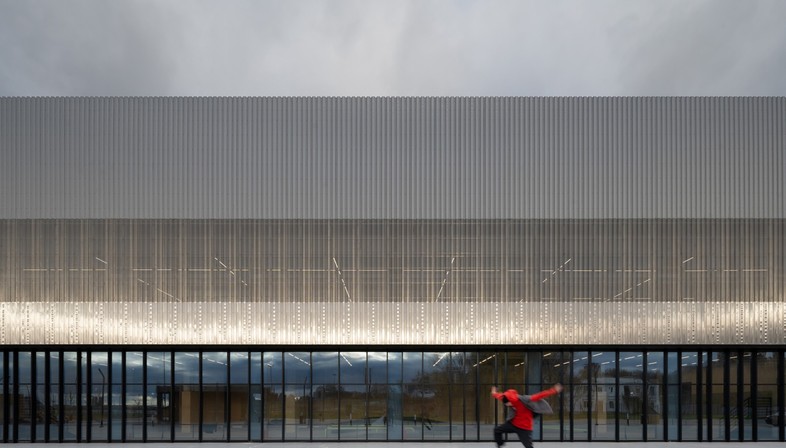 The youth culture pavilion by Kosmos + Legato Sports Architecture in Kazan’s Uram Extreme Park is the most recent link added to a chain of public areas for sports and leisure use commissioned by the government of Tatarstan for the city of Kazan. Despite its historic vocation and the wealth of its heritage, the capital of the Russian republic of Tatarstan is demonstrating a strong desire for change, using territorial planning to respond to the demands of parts of the population of different ages with very different interests.
One particularly significant example of this is the redevelopment of the waterfront along the Kazanka River, a tributary of the Volga which cuts the city of Kazan in half: Russian studio Orchestra Design will be constructing a 3.5-kilometre-long walkway for outdoor activities between Millennium Bridge and the National Library. In the context of this masterplan, a movement of young activists asked for creation of an urban sports park for use as a gathering-place in the free area beneath the Millennium Bridge. The authorities were convinced by the “grassroots” origin of the demands and the idea that the project could provide fertile terrain for cross-generational dialogue. With the intention of building a park for “street sports”, they involved Legato Sports Architecture, which specialises in construction of urban parks for extreme sports, and studio Kosmos, which collaborated in the design of the youth culture pavilion in Uram Extreme Park.
While the outdoor structures are designed for extreme sports professionals, the indoor centre is intended for youth. In their programme, Kosmos and Legato designed a building on two levels measuring 8000 square metres, containing platforms for extreme sports (air park and skate bowl) surrounded by cultural facilities: a contemporary music centre, a skate shop, a dance hall, a gallery, a conference centre and a café. The indoor pavilion is a more sheltered place, accessible in any weather, with a programme intended also for kids and families combining training facilities with gathering-places and entertainment.
With these goals in mind, the architects divided the façade into two parts built on two different scales. The regular prism-shaped volume approximately 100 metres long presents a big upper strip covered with corrugated stainless steel reflecting the look of the area’s industrial buildings, hangars and fences. The brushed finish reflects the changing light at different times of day, making the pavilion visible even from a distance, as a landmark on an urban scale.
On the ground, the project promotes direct interaction with the façade, in which red-painted concrete “hills” rest against the continuous strip of glass, connecting the outdoors with the sporting facilities in Uram.
The park on the ground seems to want to “climb” up the façades, materialising in the form of new attractions inside the pavilion. Thus the street metaphorically appropriates the building, just as “writers” do.
Parkour, skateboarding and other “extreme” street sports which were until recently – and still are, according to some portions of public opinion - considered to be of questionable legality are thus officially and institutionally sanctioned, helping to generate social bonds. 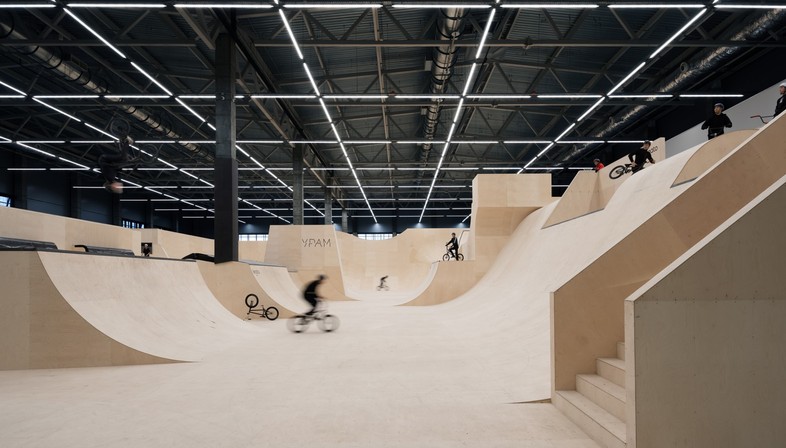 In relation to the urban scale, the architecture of Uram – the Tartar word for “street” – is also a space for representation and appreciation of group identity. At the pedestrian level, the façade invites people to stop, come in, and interact with the new artificial landscape. The apparent simplicity of the façade conceals a radical approach to architecture profoundly consistent with its function.
The building’s interior features materials characterising the industrial look, inspired by the principle of thrift, from concrete to reinforced glass, plywood and sheet metal, leaving their bare surfaces exposed in a declaration of extreme, crude honesty.
The only concession to colour in the project is use of Volt, a fluorescent greenish yellow used on work garments, which took on emblematic cultural significance when Nike created the line of shoes of the same name. As Volt has been found to be the colour most clearly visible to the human eye, the architects used it to signal key routes through the building to areas of particular interest, such as the walls of the reception box, the locker area, the railings, and the illuminated fire exits, orienting users’ spatial experience.
The Uram youth culture pavilion is so attractive because it is the result of the vast experience of Legato Sports Architecture, which has been working with motorcyclists and builders of extreme parks all over the world for many years, and of Kosmos, which recently published a volume entitled “(Con)Temporary (Archi)Tecture”, about the influence of Instagram on the architectural design and aesthetic value of temporary structures. 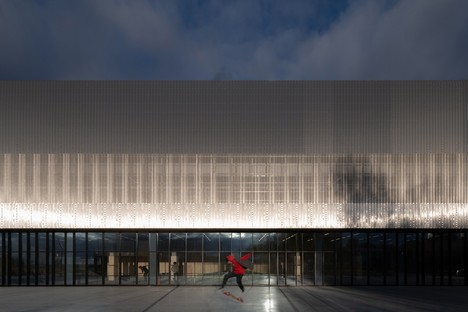 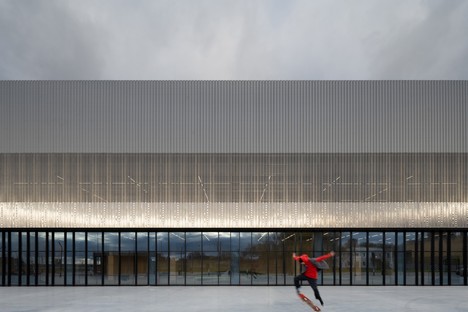 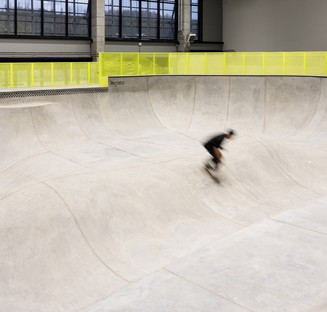 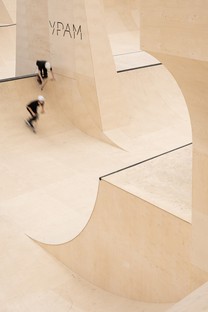 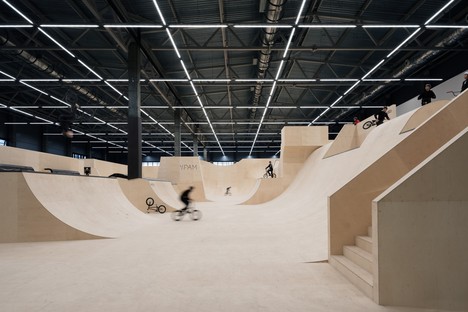 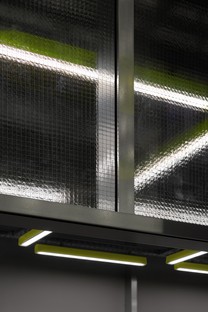 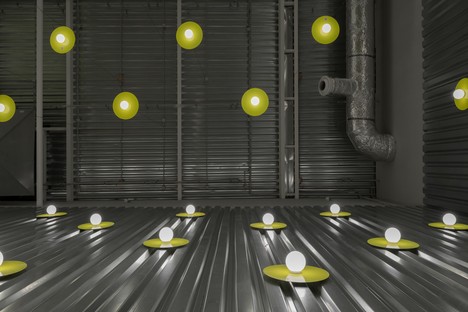 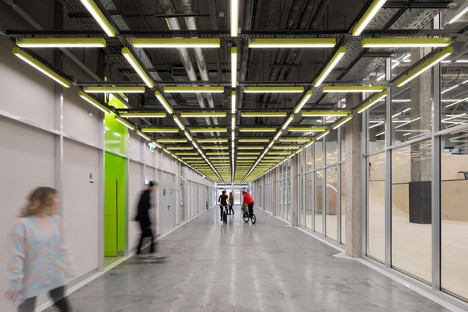 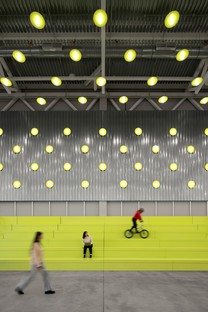 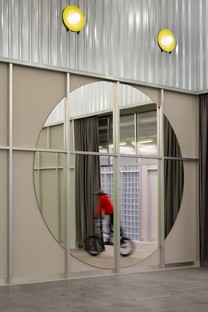 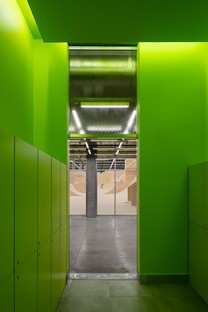 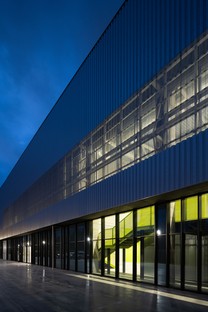 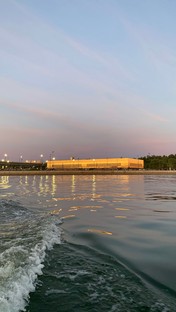 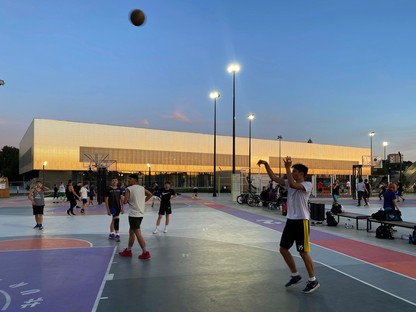 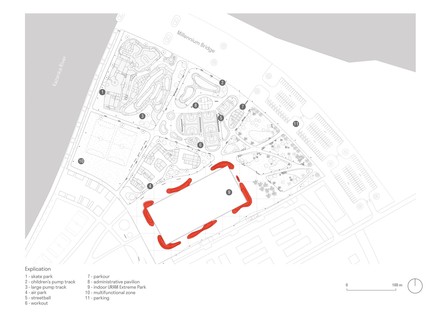 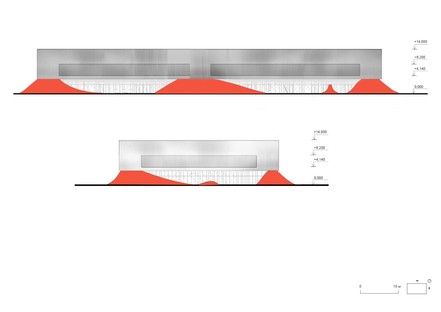 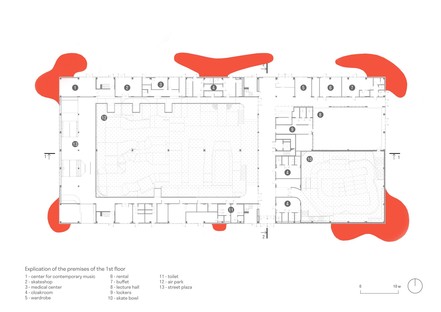 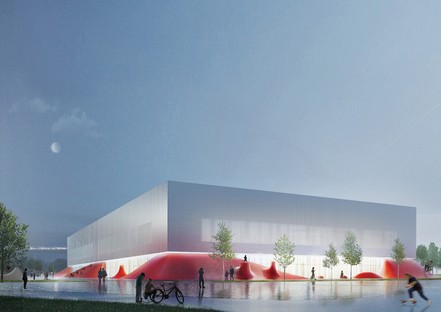