The temporary team consisting of AIA, Barceló-Balanzó Arquitectes and Gustau Gili Galfetti has designed the Camp del Ferro, the new sports centre in the La Sagrera neighbourhood of Barcelona. The latticework effect used for the bricks softens their impact, whilst the inverted vaulted roof ties the building to nearby factories. 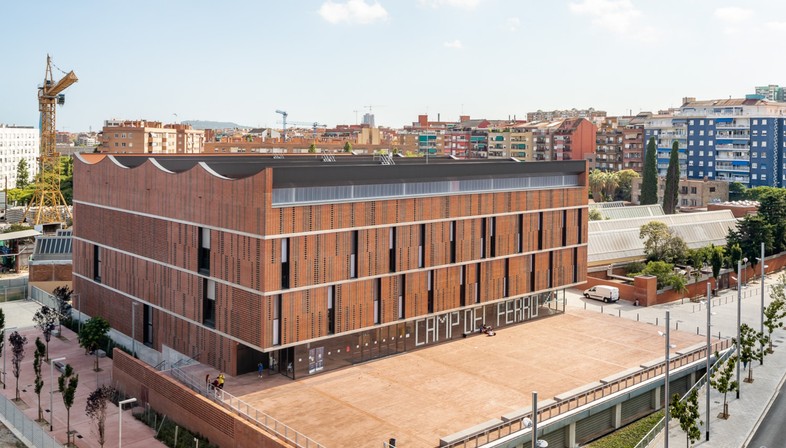 On Carrer del Pare Manyanet in the Barcelona’s La Sagrera neighbourhood stands the Camp del Ferro, a new sports centre commissioned by the city administration following a competition. The recently-completed sports complex includes three sports courts spanning a total area of just over 7000 square metres, with a combined capacity of 800 spectators.
The winner of the competition launched in 2015 by Barcelona d'Infraestructures Municipals, SA (BIMSA) - the city’s urban development company - was the temporary team composed of AIA Activitats Arquitectòniques, Barceló-Balanzó Arquitectes and Gustau Gili Galfetti. The trio’s design proved particularly popular not only thanks to its ability to develop a substantial functional programme, offering considerable volume over a relatively small surface area, but also as it treated the matter of the centre’s accessibility as an opportunity to highlight the value of public open space.
La Sagrera, once known for its industrial vocation, is struggling to evolve and take on a new urban identity. The economic downturn that the neighbourhood is suffering may be resolved with the completion of the new Camì Comtal Linear Park - which spans 4 kilometres - the undergrounding of the railway, and the construction of the new high-speed train station. For now, however, located on the edge of this vast construction site that will not be completed before 2023, the Camp del Ferro is the latest part of a system of existing sports facilities which appear to be poorly-interconnected islands. The site of this new project was previously occupied by the summer swimming pools of the Sant Andreu Municipal Sports Centre, which were demolished.
The goal was to create an architecture capable of not only accommodating a variety of activities, such as roller hockey, figure skating, futsal, basketball, handball, etc., but also providing a home for some of the city’s most active and dedicated sports clubs.
A programme as complex and substantial as this ran the risk of resulting in a jumbled tower of overlapping, disconnected elements - in relation to both one another and the surrounding public space - which would make for an oversized eyesore which stuck out from the low-rise factories and warehouses in the area. Consequently, the architects took advantage of the opportunity to place part of the structure underground, placing two of the three sports courts at this level. The third occupies the upper floor, whilst the roof of the second court has also been made into an entrance plaza which is raised above street level. As a backbone for the structure, the architects have placed a concrete block housing the service areas, the terraces for the first and second levels, the café and the administrative offices transversally, approximately halfway along the building. The front lobby, which is at entrance level, is a full-height space which spans all the floors, connecting them. With a full glass façade on the ground floor, this is the arrival point for those coming from the raised plaza and the street itself.
As for the structure itself, a combination of various shades of exposed bricks has been used in different lattice arrangements, with open sections alternating with curtain walls, creating dynamic façades which allow copious natural light to filter into the building. Polycarbonate panels attached to the openings in the brickwork act as brises-soleil, allowing for radiation whilst also providing thermal and acoustic insulation.
The roof is supported by exposed metal trusses spanning 35 metres and completed by an inverted vaulted roof, with gentle upward curves, allowing it to blend in by echoing the shape of the neighbouring warehouses’ roofs. This design feature helps to lighten the overall volume of the complex and is a point of formal expression.
Coming back to the decision to partially submerge the centre, this solution had previously been adopted in 2018 for the design of another sports facility developed by a team of AIA and Barceló-Balanzó, the Mediterranean Games Sports Palace in Tarragona. In both cases, the topographical change - and resulting reduction in surface area exposed to the sun - contributed to improving the buildings’ thermal inertia and increasing their energy efficiency.
The layered structure, with its open, communicating levels, facilitates natural ventilation and heat dissipation. The use of exposed brick as a construction material is not only a way of making this architecture feel at home in the context of a historical tradition which saw it commonly used in factories and workshops, but also a philosophical choice which promotes the use of hard-wearing, durable solutions. The building’s use of renewable energy sources and optimisation of water consumption have also garnered it a LEED Gold certification.
The new sports centre is a striking presence, facing the city as an architecture with a bold identity, yet also one that is able to interact with the urban context in a transitional space, namely the raised, open-air foyer and large, plant-lined walkway, where vehicular traffic is left behind to create space for pedestrians to meet and interact. 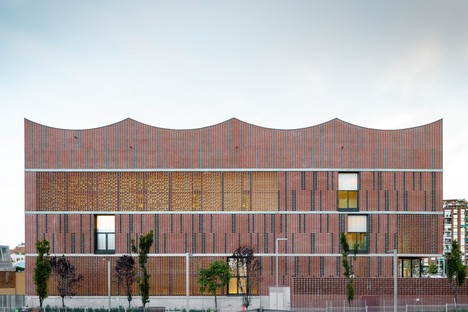 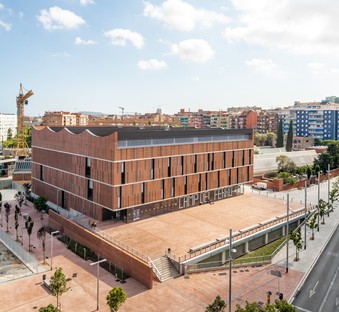 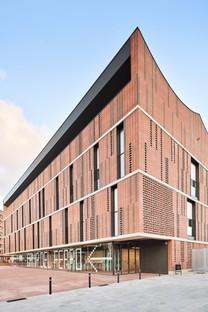 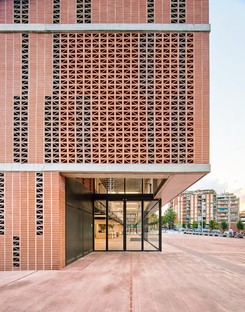 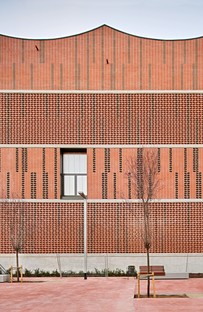 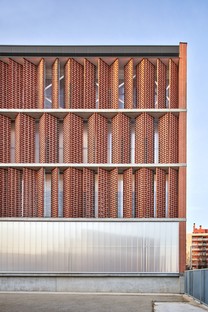 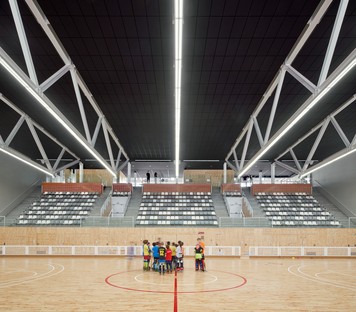 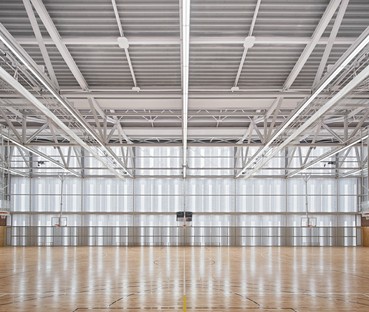 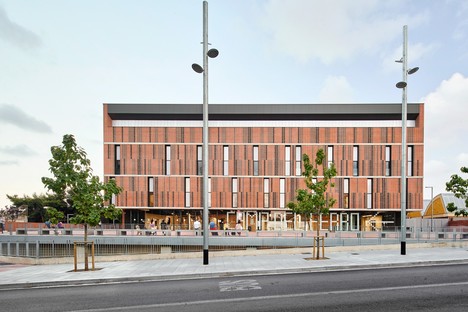 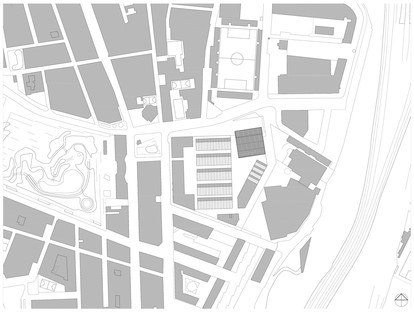 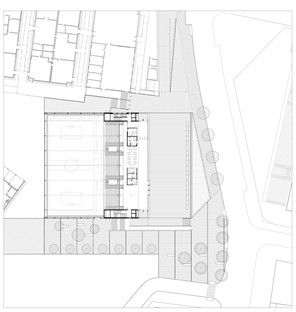 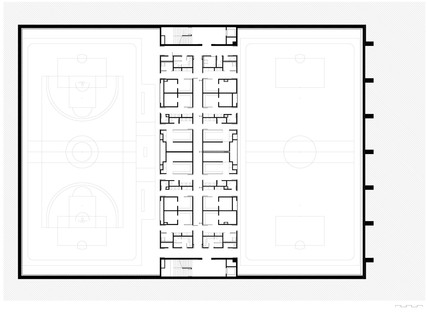 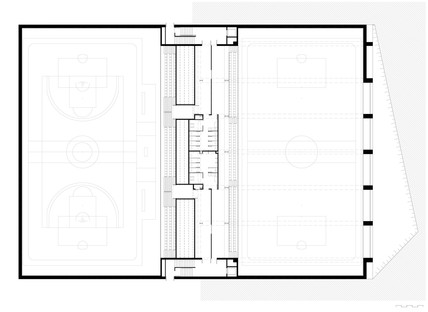 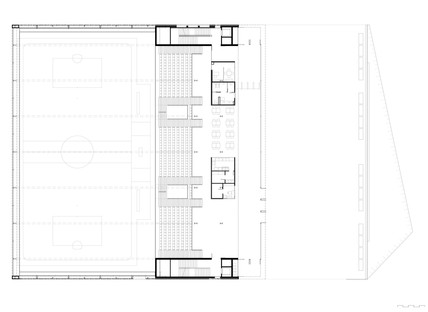 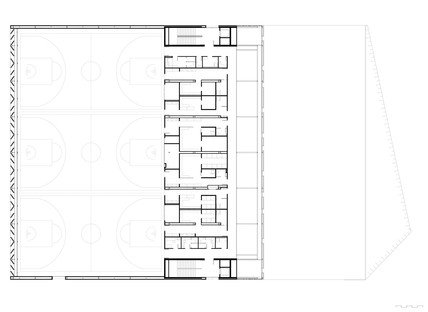 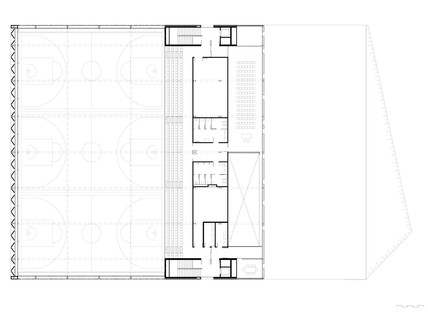 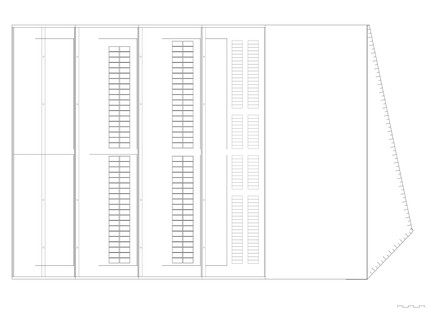