A new public school in Cartagena

Local building materials and techniques, integration of inside and outside and social value are the key themes of the school building designed by Mazzanti and Mesa for Cartagena in Colombia. Flor del Campo is an example of the contribution architecture can make to rehabilitating the area in which it is situated. Giancarlo Mazzanti and Felipe Mesa’s project for the new Flor del Campo school campus is inspired by their ambivalence about the nature of architecture: as a series of separate parts which are perceived as a whole, or as a single complex in which we can distinguish different parts. This reflects the sense of the school as a body on a higher level which is fragmented into parts, permitting organisation and implementation of activities according to the pupils’ ages and levels of instruction. The complex concept of distinction within the whole declared by the school building is even more important as a value in the difficult social context of the city of Cartagena in Colombia, where people’s lives have been repeatedly turned upside-down by floods and landslides and devastated by civil war.
The Flor del Campo project is an example of Giancarlo Mazzanti’s architectural programme for schools applied all over the world, based on breaking down the campus into parts and unifying them with a flexible circle of visually permeable walls, so that the exterior is visible from inside the school and social activities and school activities can have an impact on one another. The layout is divided into four circular spaces, called rings because each is designed with a prefabricated cement openwork barrier designed by the architects on the basis of the disorderly natural structure of tree branches . Use of this material, derived from traditional local construction techniques, is intended to fit into the tradition and permit hiring of local workers who already have experience in these techniques, reducing costs without compromising on structural qualities: prefabricated cement openwork is used as a bioclimatic membrane permitting thermal exchange and ensuring the healthfulness of the rooms. In association with the concrete structure, the weight-bearing steel columns define covered routes where the three rings come together.
Guided by the concept of intersection of separate parts, each of the 4 rings, which contain general services, the nursery school, the elementary school and the junior and senior high schools, includes an indoor part with classrooms and an outdoor area with a courtyard and a garden which is taken care of by all the pupils, making it unique and different from the other gardens. The layout of the rings creates semi-public spaces from which students can access services intended for the entire school community, such as the library and the canteen, located in the southeast ring, which stays open beyond school hours and on weekends.
The building’s humble, rough appearance fits respectfully into its surroundings of modest homes for low income families. Use of the same structural and expressive vocabulary and the absence of the fencing normally necessary in school buildings, the function of which is performed by the decorative units embracing the building’s outer and inner boundaries, ensure that the school building fits into the landscape and the society around it. 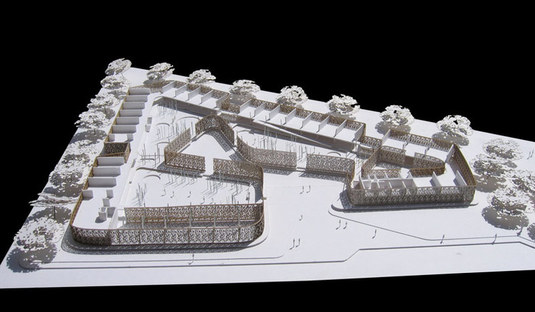 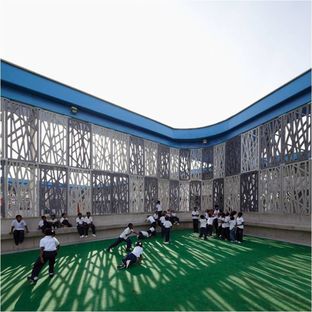 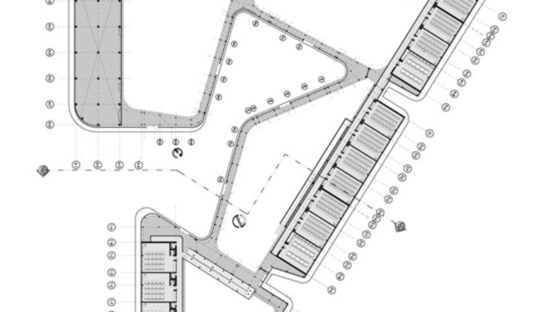 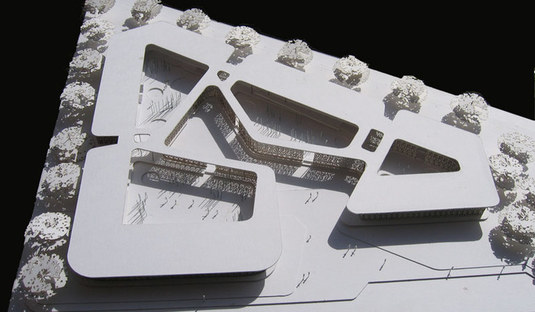