In the new Courthouse in Tulkarm, Palestine, volumes characterised by different walls, types of cladding and strategies for protecting against the sun’s strong rays form a landmark scenario. The building opens up to the city, in opposition to the concept of the citadel of justice. 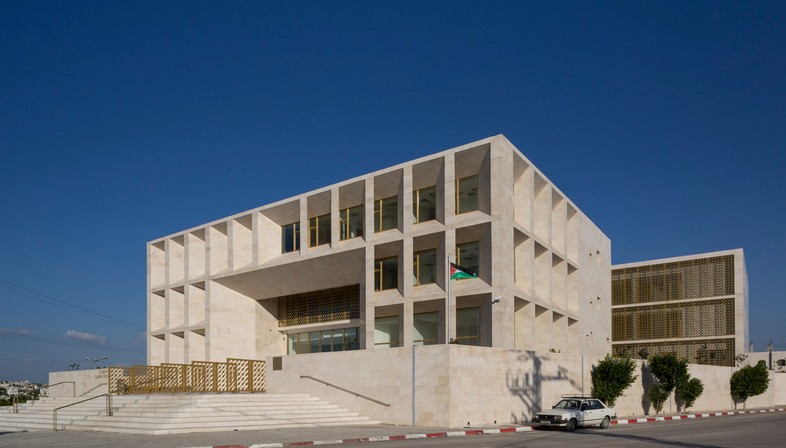 Shortlisted as a finalist for the 2022 Aga Khan Award, the new Courthouse in the town of Tulkarm, Palestine was commissioned and built by the UNOPS, the United Nations Office for Projects and Services, and designed by Palestinian studio AAU Anastas.
The breath of fresh air perceptible in the project is motivated by the ambition and ability to dismantle the traditional image of the courthouse as closed in on itself and shut off to the town around it. Yousef and Elias Anastas, who worked on the project themselves, express this drive for change in a destructured building composed of two volumes joined in the middle by transparent passageways in which plenty of light can penetrate, providing access to the landscape as a part of the everyday view. They eliminate the concept of the citadel of justice, a place people go to only when they are forced to do so, using the breadth and transparency of the passageways and waiting areas to make time spent in the building more comfortable. Their intention is to build a place where people will be happy to go, somewhere they will visit with interest, an urban landmark.
Toulkarm is a town in northern Palestine renowned for its fertile soil and as a centre of trade. The new Courthouse, containing the courts of first instance, is part of a more extensive redevelopment project covering a vast part of the city, and stands on a triangular lot at a prominent crossroads. Because of this position the building was destined to become a landmark that stands out as a reference for orientation in the town. The architects of AAU Anastas built a construction that responds to these requirements, adding a series of spaces and elements that act as bridges between the urban fabric and the citadel.
With its main entrance at a higher level than the street, when seen from below the Courthouse appears to stand on a larger podium, underlining the building’s prestige while offering a series of open green spaces that act as a filter and break up the solidity of its walls.
While the access stairway is a common element in buildings constructed for this function, the public space at its top is an innovative element offering a meeting-place, an area where people using the public offices can wait and socialise.
The concept proposed by AAU Anastas sets up an ideal representation of a stage set consisting of a succession of different planes: while the first volume, smaller in size and located at the tip of the triangular lot, contains the administrative offices, the registrar and the notary public, the second, larger volume, shaped like a prism, contains the 12 courtrooms at the back of the lot. The two blocks are separated by a third courtyard area, bounded by glass walkways above the ground floor which are visible only from the side, connecting the two volumes. When seen from the town, the gaps created in between them offer a perspective of the whole complex, playing an essential role in ensuring that the Courthouse does not look like an impenetrable fortress to the public.
The Courthouse is also a complex, highly varied building in terms of the materials and cladding employed. The architects report that in Palestine, an old British law is still in effect requiring that all new buildings be made of stone; after all, they add, every town in Palestine is less than 50 km from a quarry. The abundance of stone was a decisive factor in the design of the Courthouse: the first volume, made of concrete, is covered with local stone, framing what appears to be a rigid, severe grid of windows, but actually varies on either side of the main façade. Use of embrasures reminiscent of Romanesque religious architecture gives the building an air of traditional prestige; moreover, the differences in the inclination of the recesses play a very important role in sheltering the interiors against direct sunlight. Combined with large surfaces of glass, they offer broad views over the landscape from inside the building. 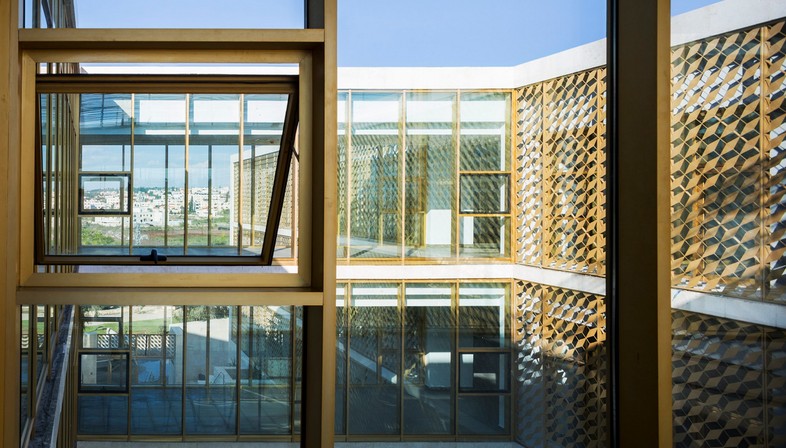 In clear contrast, the walls of the building containing the courthouse are covered with powder-painted galvanised steel that shimmers in the sun. Like the mashrabiya typical of Middle Eastern architecture, this produces areas of light and shadow which also screen out the sun’s rays, in a different way, to ensure comfort inside the building. Under the main glass walkways vast green areas extend toward the world outside, like little oases in a landscape predominantly in shades of ochre.
From the halls on the various levels and the horizontal walkways, an ever-changing but always brightly lit space is visible, a circumscribed area which nonetheless maintains the perception of the city around it. 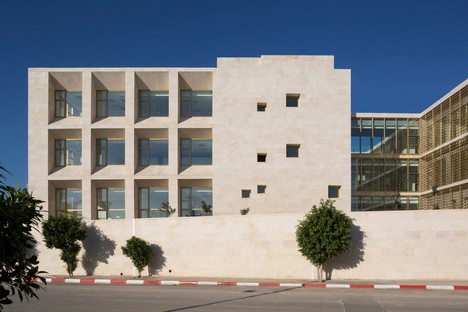 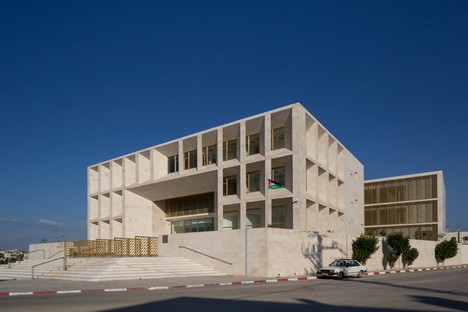 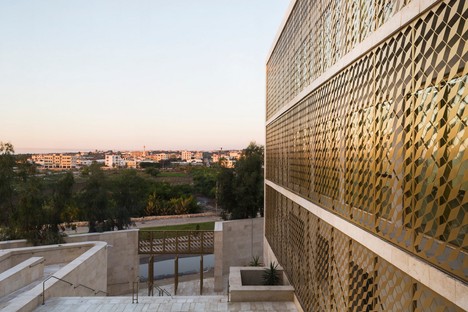 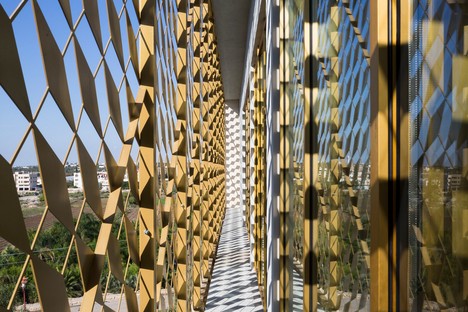 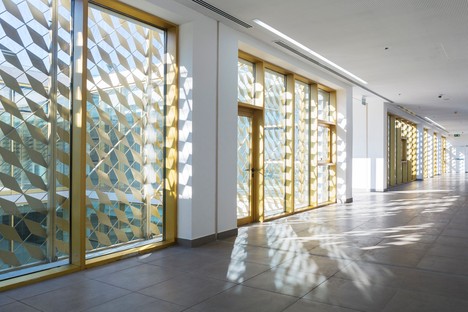 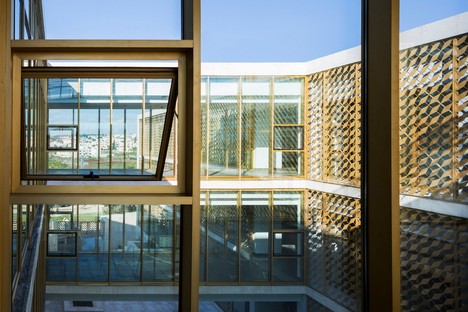 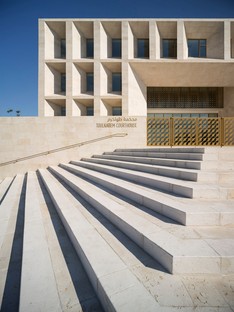 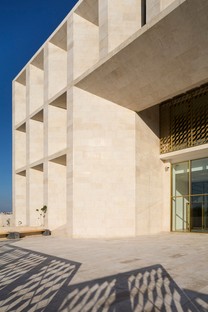 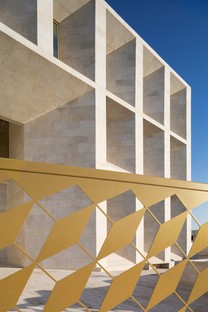 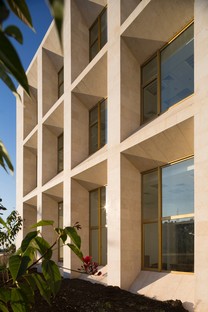 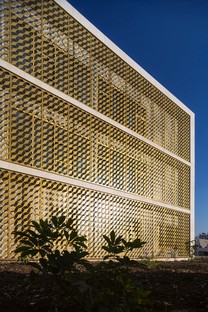 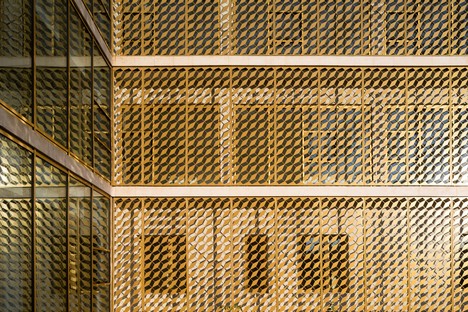 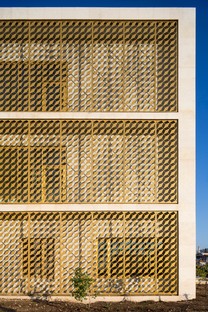 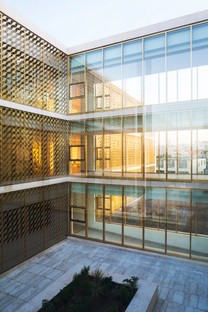 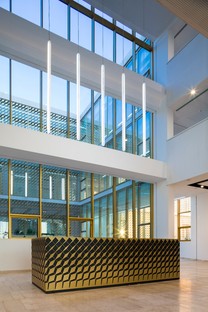 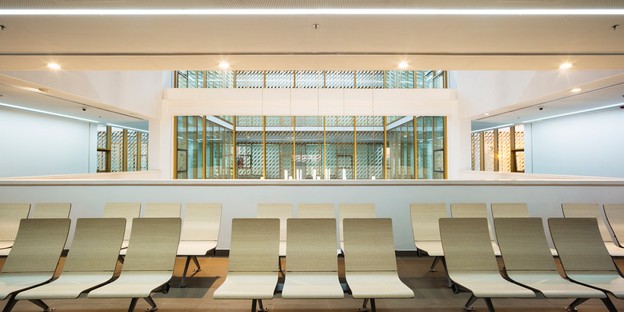 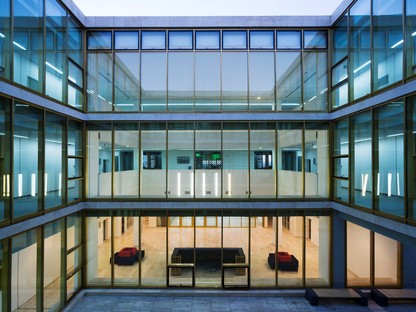 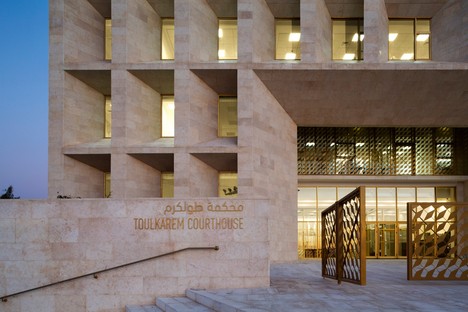 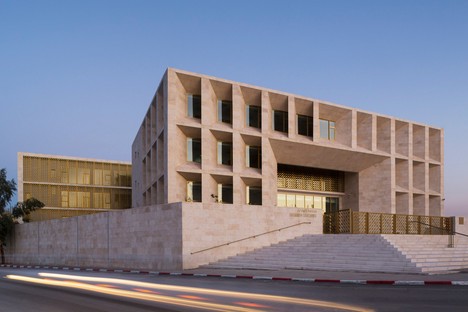 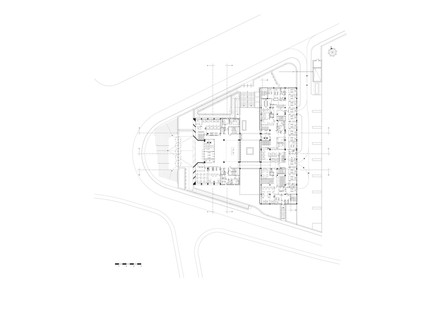 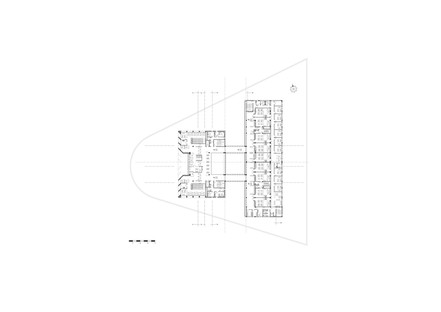 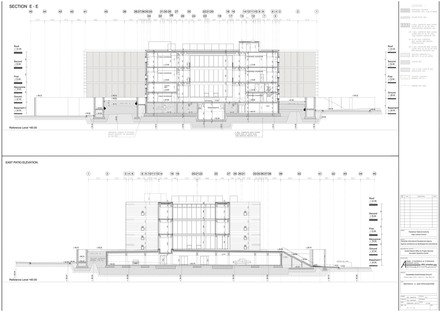