In the renovation and expansion of Romelio Martinez stadium in Barranquilla, Colombia, which also hosts the famous Barranquilla carnival, Giancarlo Mazzanti creates an open, permeable structure that lets the city inside. 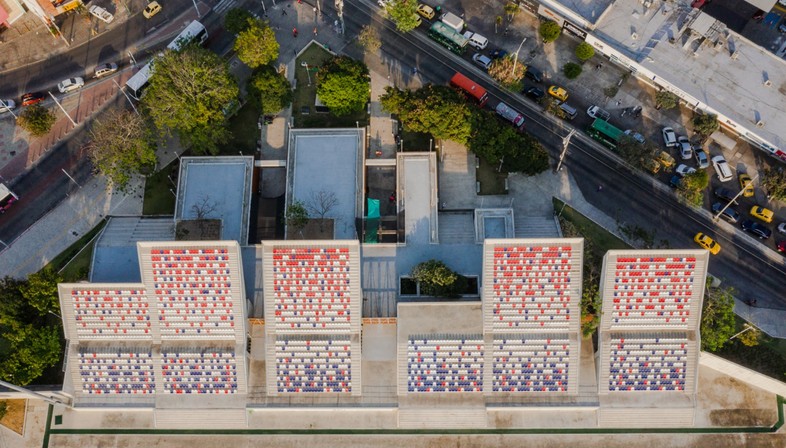 When we look at images of the new plan for expansion and renovation of Romelio Martinez Stadium in Barranquilla, Colombia, what spontaneously comes to mind is the Four Sport Scenarios Stadium for the 2010 South American Games in Medellìn, designed by Giancarlo Mazzanti with Felipe Mesa (Plan B Arquitectos) in 2009. The conceptual inspiration is the same, suggesting architecture should be considered a tool for social progress.
At the time of the Games, and in the years that followed, Medellìn was further transformed by an infrastructure plan designed to ensure that the city’s poorest, most outlying districts had access to resources via connections with more culturally dynamic, central parts of the city. Mazzanti was one of the architects who designed school buildings, urban parks and plazas to create places of aggregation in complex neighbourhoods on the city’s outskirts. As the ”Economist” noted, this made Medellìn a model of development throughout Colombia and beyond; as we wrote at the time, the aim of all of these constructions was to get people out of their homes, creating social life as an antidote to delinquency.
What the two stadium projects in two different cities have in common is the importance attributed to interaction with the city and the relationship between indoor and outdoor spaces, which in both cases express the urgency of establishing continuity between public places with different functions. In the case of Medellìn stadium, a roof made of steel modules embraced four sporting facilities in a transparent, permeable unit which people could experience not only by going inside, but also, and above all, from outside, in the plaza.
Romelio Martinez Stadium in Barranquilla offers the same blend of public plaza and sports centre in a structure which is uncovered and destructured in its principal parts, where the stands break apart and open up to let the city in.
The original structure, intended for baseball only, was constructed for the national track and field championships in 1935. After that occasion it was used as a local soccer field, but audiences grew when professional soccer came to Barranquilla. In the early ’70s an initial expansion was begun, but never completed, following the episode known as the “stand of shame”, in which a mistake in the construction of the new stands first caused narrowing of Calle 72, adjacent to the stadium, and then ended with the demolition of the incomplete stands. Despite this, the stadium continued to be used for minor games and above all to host concerts and other public events. When Barranquilla was chosen to host the 2018 Central American and Caribbean Games in 2014, EDUBAR, a mixed public-private enterprise for urban redevelopment of Barranquilla’s Central District, commissioned Giancarlo Mazzanti to expand the stadium.
The starting point for Mazzanti, who was born in the city, was reflection on a problem common to all sports stadiums: the closed structure and its problematic relationship with the city and activities around it. The architect imagined the new stadium not as an enclosure with walls bordering and isolating the space inside it but as a sequence of discontinuous stands of variable size through which people could watch events going on in the stadium from the streets around it and, above all, from leafy plazas outside it; vice versa, it would also be possible for people in the stands and participating in events to see the city streets from inside the stadium. Breaks between the stands now permit differentiation of different uses, so that certain events may make use of only certain groups of stands.
The need to host events of different kinds, and not only sporting events, guided the arrangement of the new stands in a linear layout along the eastern and western sides, appropriate for Carnival, when floats and groups of dancers parade along the north-south axis.
Visibility between these areas makes events such as Carnival accessible even from the outside, turning them into public events which are not reserved only for spectators sitting in the stadium.
Mazzanti designed the construction to be an organic part of a park with little leafy plazas, gardens, terraces and covered spaces for commercial enterprises. The layout clearly reveals that these elements have been designed as extensions of the stands on the ground, so that each area can be separated from the others, while all together they form an open park in a part of the city that had a great need for greenery.
The southern area, by the children’s playground, is a sloping courtyard designed for picnics and group games. The northern gallery and its roof are parts of the original stadium, restored to preserve its art deco style. In the future a museum about the history of soccer in Colombia will be opened here, while the western side, under the stands, contains spaces for restaurants facing the gardens, and the walls on the opposite site jut out to form terraces containing shops and fast food outlets on the ground floor: sixty small businesses that were afraid of losing their premises as a result of the renovations have been integrated in the project as essential elements of the local economy and social life. 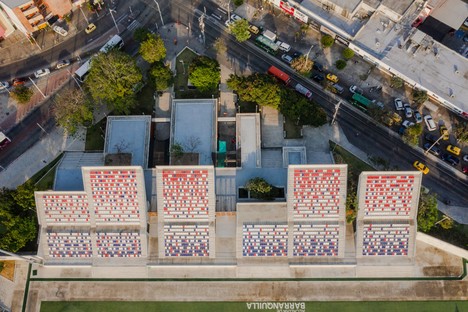 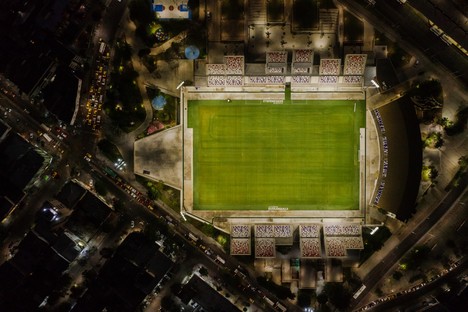 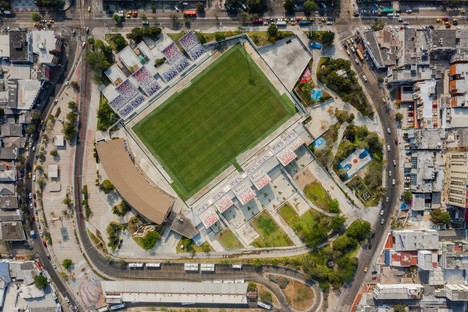 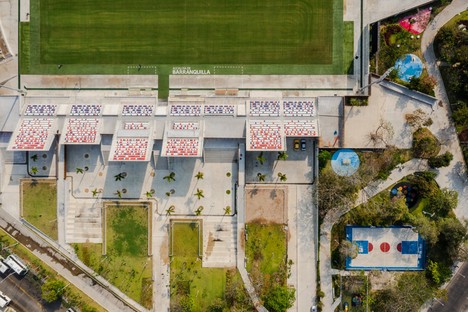 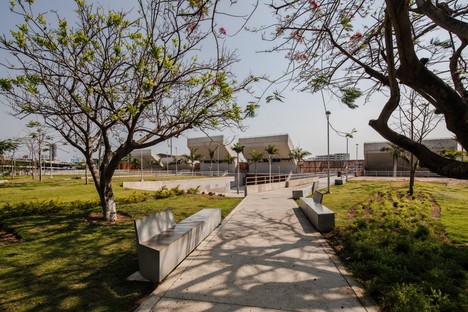 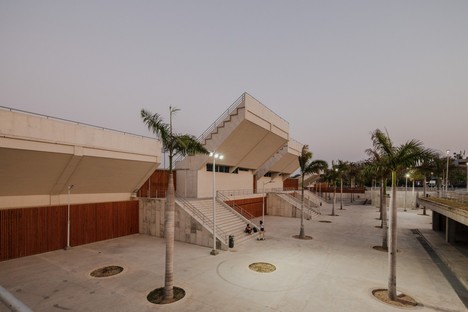 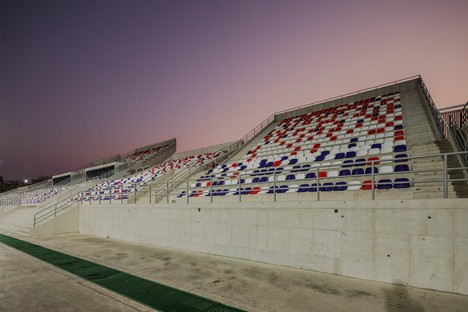 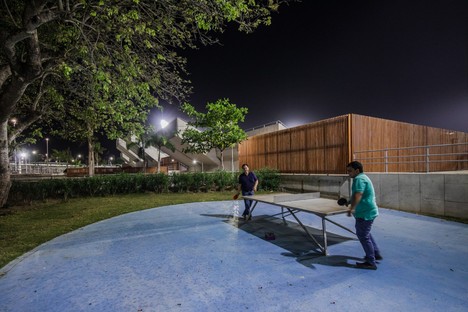 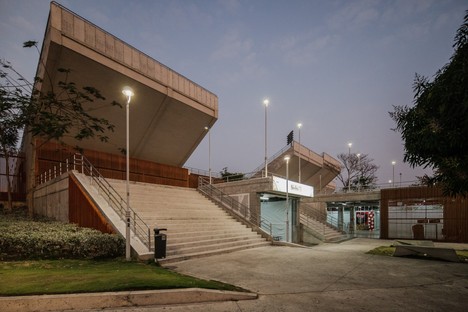 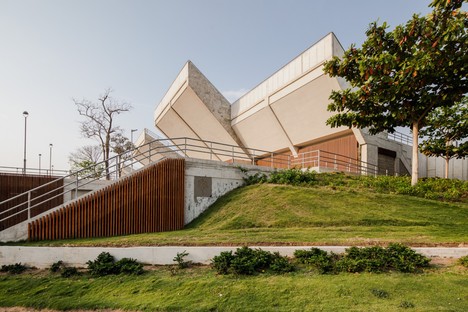 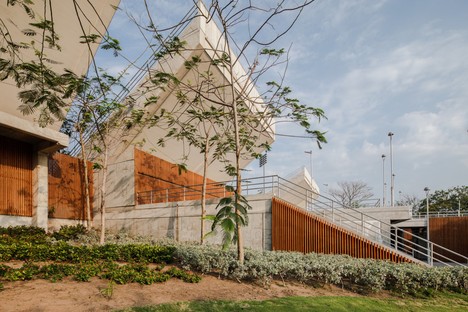 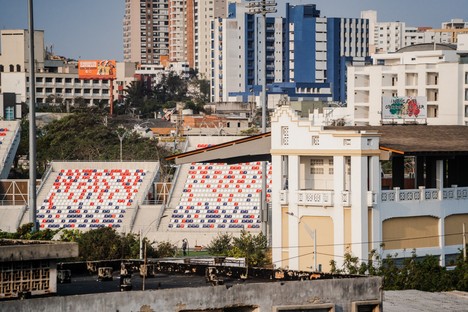 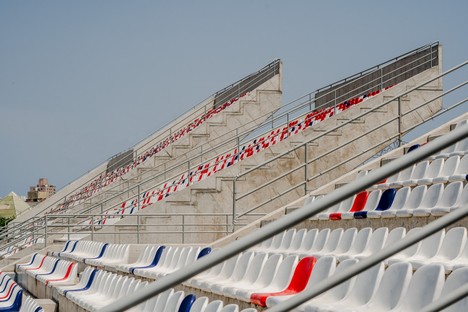 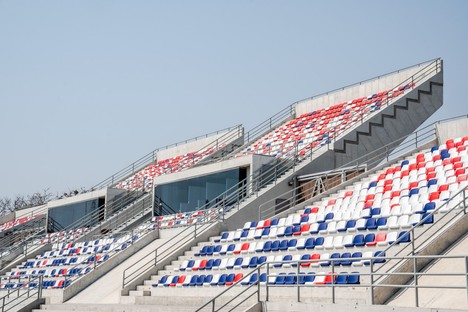 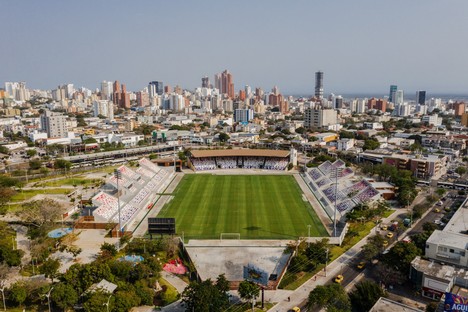 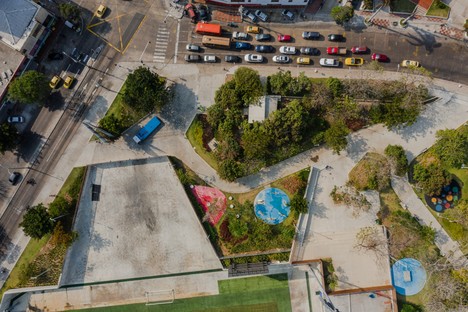 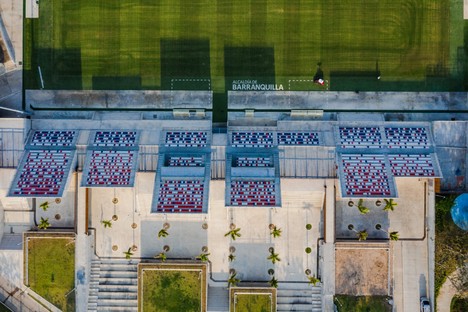 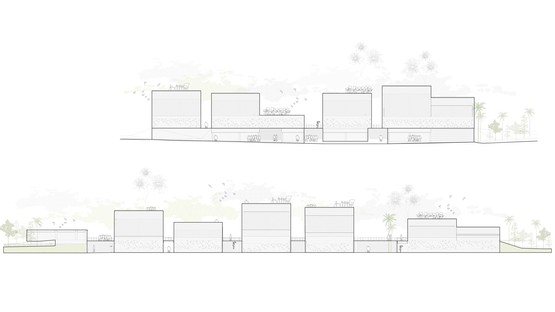 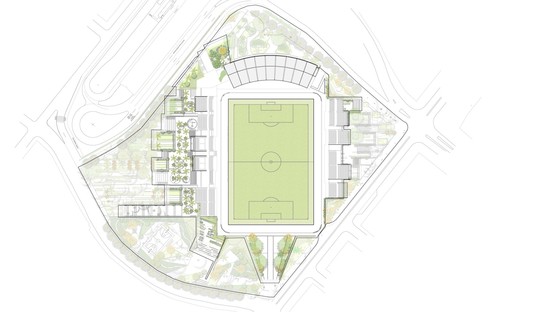 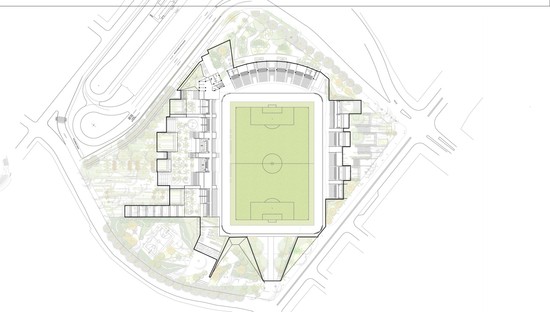