Kouhsar Villa by Nextoffice: redevelopment of a house in Kordan, Iran

The new Kouhsar Villa by Nextoffice in Kordan, near the Alborz mountain range, is architecture on the border between geometry and organicism. The hermetic exterior opens into a dialogue with the landscape thanks to the new floor-to-ceiling facade in concrete and glass. The central void designed by Nextoffice, creates a dialogue between the two floors. 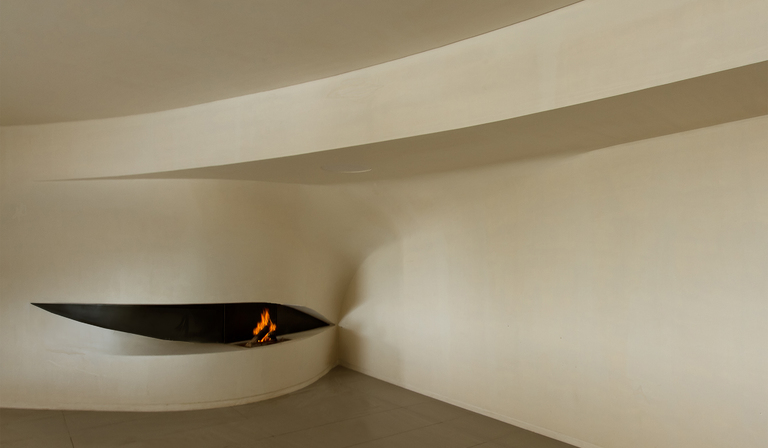 The owners of the Kouhsar Villa in Kordan, near Teheran, wanted a home in which the ground floor and upper floor were visually connected, so that in a single glance those who inhabited it could fully enjoy its greatness. The Iranian studio Nextoffice took over the Kouhsar Villa project when building work was already at an advanced stage. The architecture followed an articulated plan, with no attention given to overall symmetry and functionality. It had a structure with concrete pillars and bases and was developed on two levels, plus a third with a terrace covering, surmounted by a penthouse. The most evident feature – and also constraint – was a dual-height octagonal central space with which the previous design tried to meet the need for communication between the floors requested by the clients. It had been treated as a separate block, with no direct or indirect connections with other spaces and therefore failed to create any kind of perspective dialogue, but instead ended up being an encumbrance, an element of separation that was isolated and little used.

Nextoffice’s idea was to transform this empty space into a significant one, able to draw the architecture’s lines of perspective towards it. In order first and foremost to increase its size, developing the dual-height space towards the main, southern façade, in which they kept the entrance, Nextoffice knocked down the central area of the balcony between the octagonal element and the outside. The next decision, which was fundamental for the formal architectural balance of the home, was to simplify the general plan, eliminating the lateral portions, increasing the volume towards the north and, finally, removing the penthouse. This gave the work a cubic form, resting on a large paved space with a swimming pool: a kind of podium that valorises and raises the building.

The decoration-free walls and apparently hermetic nature of Kouhsar Villa form a dialogue with the Alborz mountain range on the horizon. The concrete walls are painted in earthy colours, while the main façade to the south is a concert of contrasts, full and empty volumes, glass and cement, organicism and geometry. The surfaces of the south-facing façade bend several times towards the interior, almost inviting you to enter, following the position of some of the pre-existing pillars and enclosing them to create the new central void requested by the client. However, this is no longer an isolated empty space, but a large dual space enclosed by a floor-to-ceiling window, with no perceptive boundaries, and a belvedere overlooking the exterior. The water in the outdoor pool seems to allude to the fluidity of the internal spaces, which create communicating environments with no real borders on the ground and upper floor, as the previous dividing walls have been almost all eliminated. The main entrance has been moved to the right side and enlarged, allowing access to a semi-circular route between the living spaces. The stairs in the north-east corner lead to the upper floor and the bedrooms. 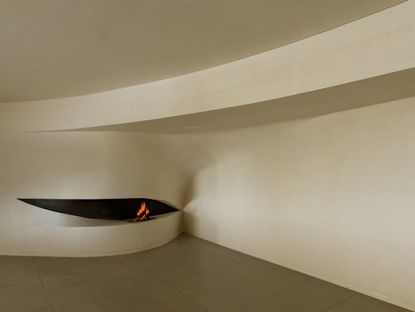 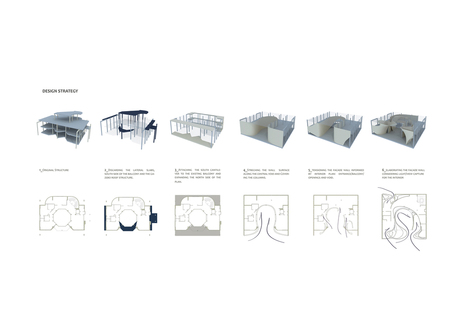 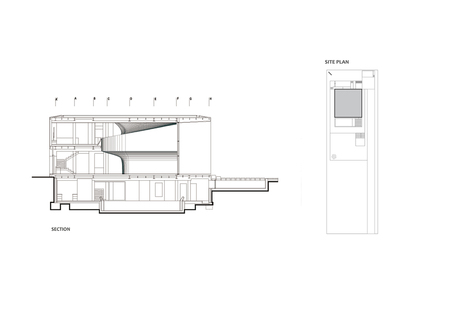 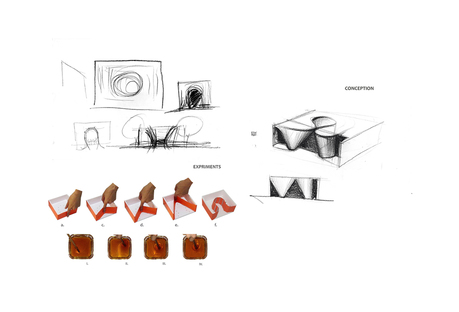 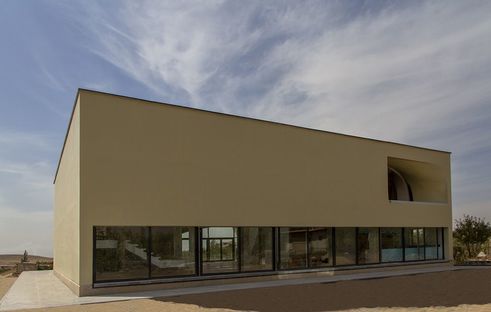 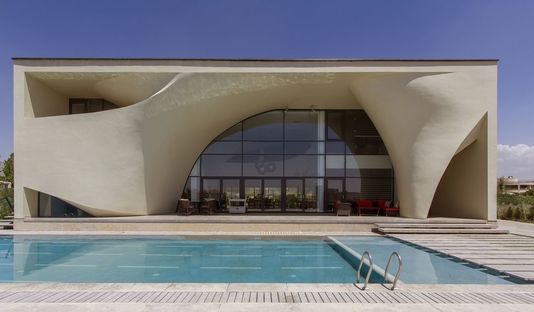 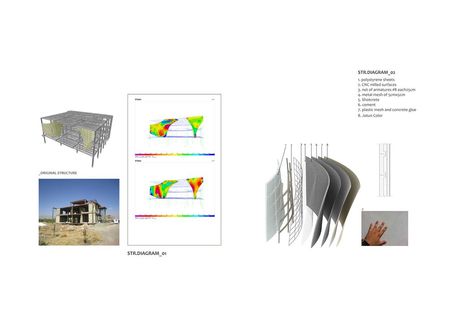 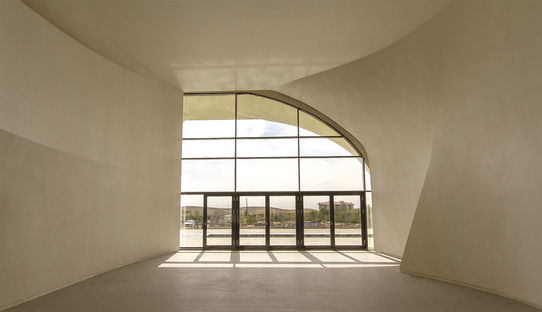 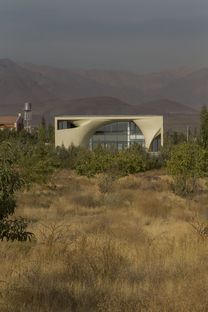 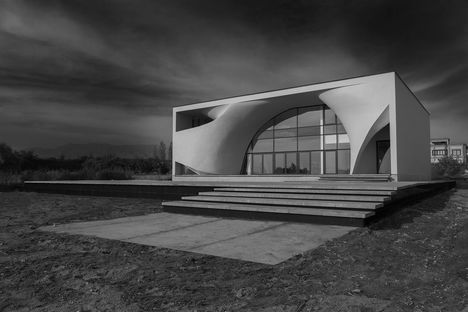 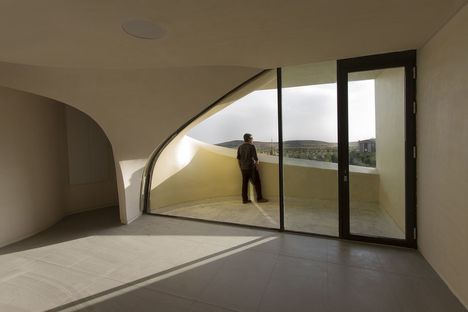 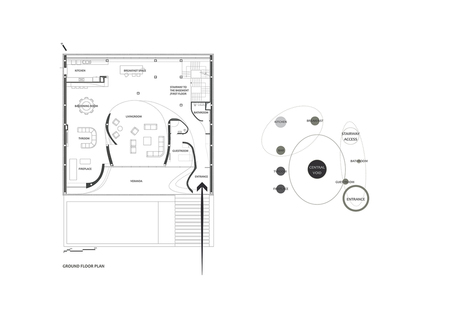 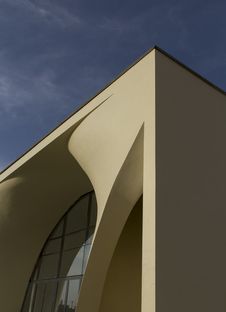 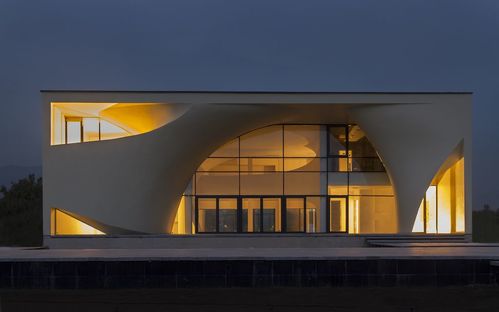 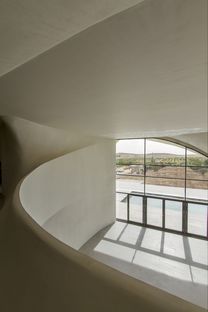 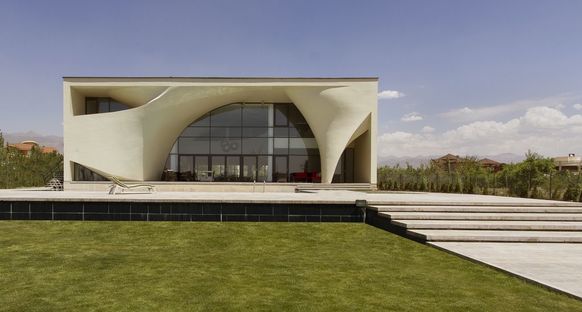