In Yasutaka, a tourist resort not far from Tokyo, a home on the waterfront stands out for its windows, each different in shape, as in an infants’ shape sorter. Designed as a home for brief holidays, the building features a dance of floor and wall covering materials on the inside. 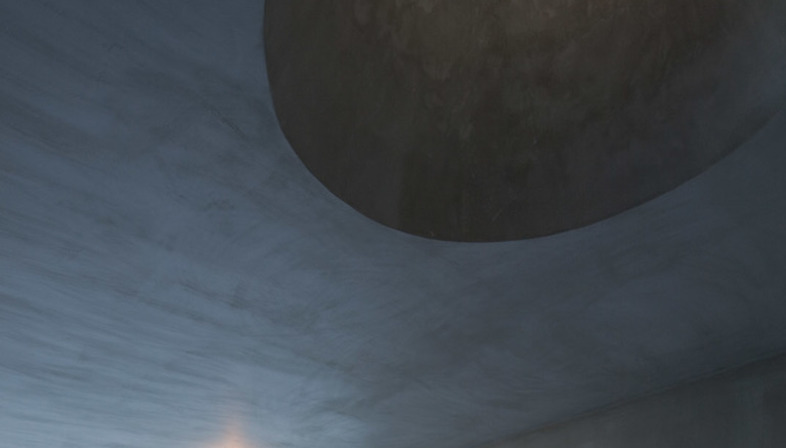 In architecture, perspective is everything. The angle from which we look at things makes a big difference in everyday life, and even more so in architecture. The importance to contemporary society of the act of viewing a work of architecture, art or design, which in turn becomes art, is revealed by the undeniable process of image literacy which we are now undergoing. Much more than through a code such as a drawing of a building, a plan or cross-section, it is through photographic interpretation that we are now able to judge a construction, even if our judgement is rather superficial.
"Nowhere But Sajima" – the name of a holiday home built for the company Nowhere Resort - is designed as a crossways of different points of view, an aspect which photography can capture perfectly.
While it is true that perspective is an illusion, we might also say that architecture itself is an illusion; and perspective is an extremely evocative tool for designing space in architecture. Japanese architect Yasutaka Yoshimura’s house on a trapezoidal lot on the waterfront in Yokosuka has a triangular floor plan which is closed on the southern and western sides, facing the outskirts of the town, and open on the northern side overlooking the sea and Mount Fuji. The triangle shape, considered impractical in Europe but quite common in Japan, leaves room for the addition of a garden on the southern side of the house while taking full advantage of the view of the bay to the north.
The anti-seismic reinforced concrete structure is organised on three levels linked by a single spiral staircase in the northeast corner. The home can house up to 6 people, with bathrooms and single rooms on the ground floor, a kitchen and study on the first floor and the master bedroom with a big living area and private bathroom on the top floor.
The side overlooking the bay is the one entrusted with the architect’s message, his theory of vision: regulated by the form of the windows, which are very large and all different in shape, it stands out among all the other facades on the waterfront as a divertissement, attracting curiosity and attention with a decorative solution so different from ordinary geometric, modular buildings. As seen from the inside, on the other hand, the windows are like a series of pictures frames showing off the landscape and underlining the importance of its relationship with architecture. Every detail of the interior seems to be subjugated to this sacred dialogue, from the window frames, which are concealed within the walls to avoid even the slightest interference with the view, to the beds, which are set within the space of the bedrooms, the simple light fixtures emerging from the ceiling like torches, the floors designed to underline the orientation of each room, and the bookshelves concealed in the sliding door of the living room, tricking the eye yet again. All the spaces are oriented towards the outdoors: some with terraces extending the rooms out toward the sea, as in the main bathroom, designed to offer broad views of nature according to the Japanese tradition; others directly overlooking the sea, such as the niche forming a poetic private study space on the top floor. 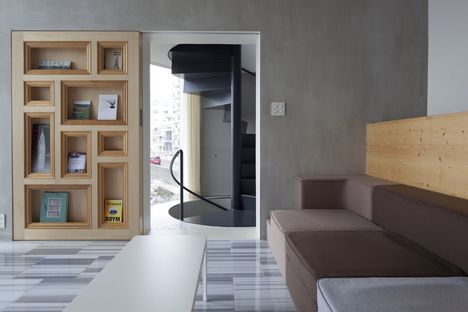 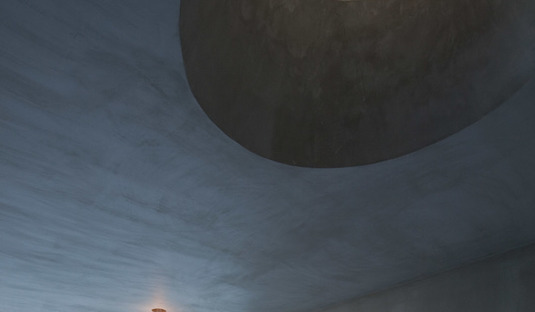 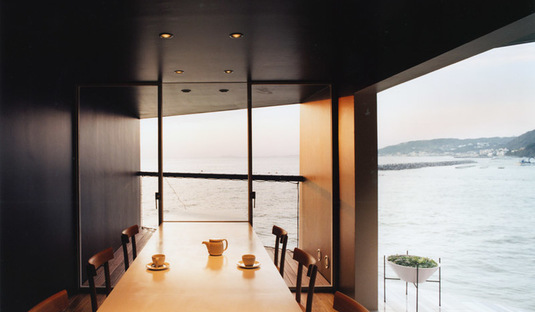 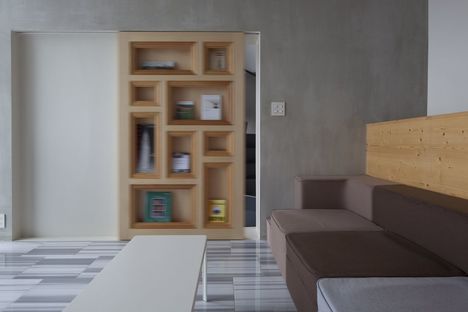 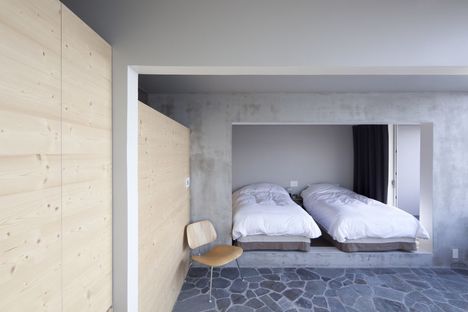 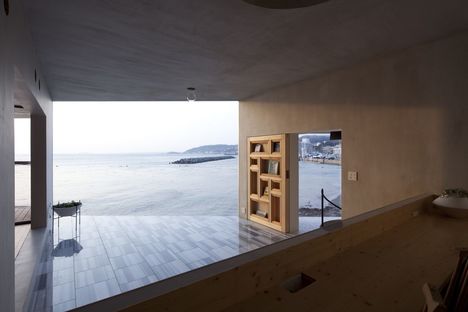 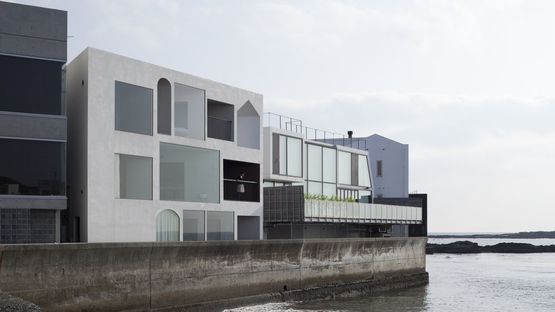 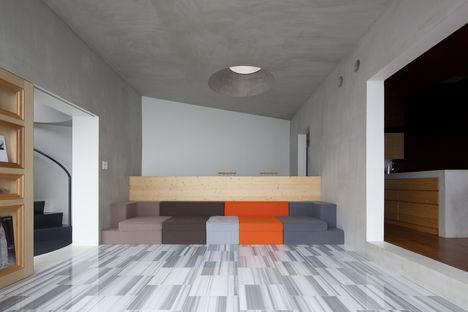 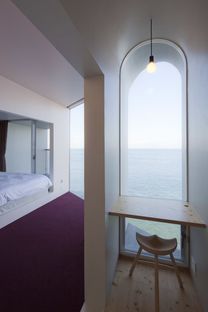 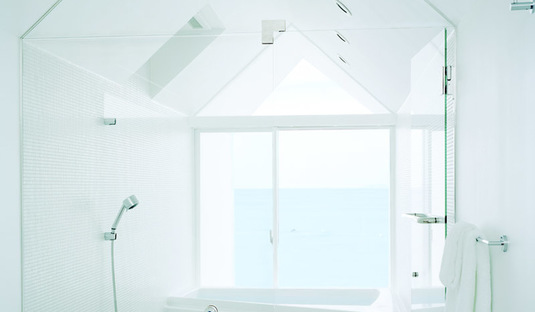 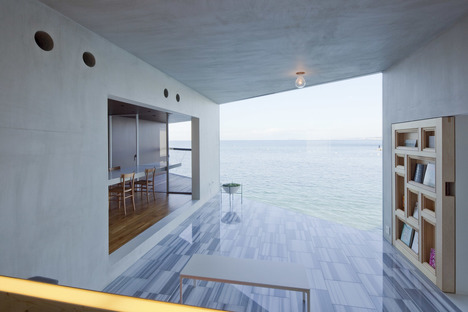 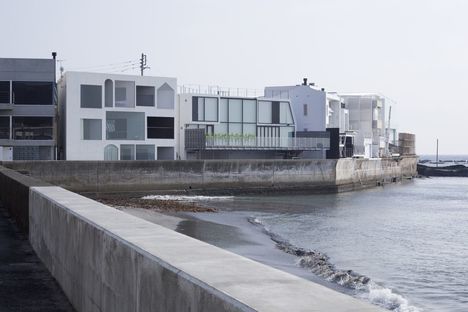 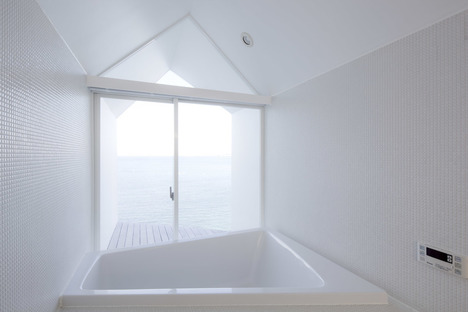 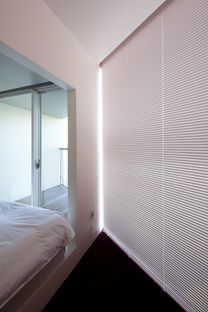