The former Cristalleries Planell artistic glassworks in Barcelona is now the home of a civic centre of the same name designed by Harquitectes of Spain. Harquitectes reclaims an episode in the city’s industrial history with an energy-efficient building. 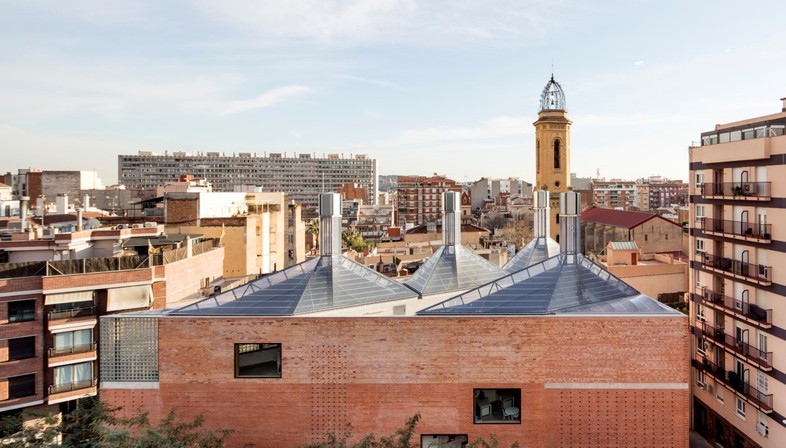 Harquitectes of Spain designed a new civic centre on the site of the former Cristalleries Planell artistic glassworks in Barcelona, an important presence in the city’s industrial development in the first half of the twentieth century. The glassworks building was constructed in 1913 on a triangular lot that is unusual in Barcelona’s nineteenth-century grid layout, with its main entrance on Carrer d’Anglesola, in the Les Corts industrial area.
When Harquitectes took charge of the plans for reclamation of the building in 2012, time had already made its unredeemable mark on it, and very few traces were left of the Catalonian Modernist walls designed by architect Josep Graner i Prat. The original glassworks building had a triangular layout on two levels topped with a jutting cornice. The brick walls around its perimeter are marked by pilasters with decorated capitals and big vaulted windows letting light into the workplace. The glassworks shut down in 1957, a few years after the death of its founder, Leopold Planell, and over the next fifty years the walls were filled in for safety reasons, without any proper planning; the walls became mute, and the building was left to decay, as no-one seemed to have the courage to address the urban planning problem.
A few years ago the city government finally decided to reclaim this example of industrial archaeology, protected as a heritage building on the sides facing onto Carrer Dr. Ibànez and Carrer d’Anglesola. It was not simply a matter of saving a fragment of the neighbourhood’s history, but above all a matter of reclaiming the vestiges of a symbolic building, a memory of the fertile industrial past that characterised the city’s development in Europe’s second wave of industrialisation. In the first half of the twentieth century Barcelona saw rapid growth in the form of ongoing major urban planning projects. Productive districts such as Les Corts were consolidated, containing a city that grew parallel to the bourgeois town: a city of working-class families that grew in proportion to industrialisation, huddled together in conditions that were often miserable. This is where the first workers’ associations were formed, anarchist groups that began the class warfare that was already appearing throughout the post-industrial world. Cristalleries Planell saw events that went down in history, such as the “children’s strike” of 1925, when child workers rose up against the abuse and exploitation they were suffering.
None of the buildings of that time were saved from the impellent need for modernisation the city of Barcelona continued to feel, especially after the seventies. This is why the Cristalleries Planell building is more than just a monument, it is a memorial that the City wants to bring back to life as a civic centre.
Harquitectes has converted the entire industrial complex into a centre for social and educational services. The interiors have been completely redesigned: the building now has four levels primarily containing classrooms, meeting rooms and offices, while the width of the space has been reduced, cutting it back from the heritage wall on the southern side and the corner of Carrer Dr. Ibànez and Carrer d’Europa on the northern side to create a triangular atrium that acts as a filter between the building’s interior and the city. The need to step back from the historic walls benefited the energy efficiency of the complex as a whole. A gap a few metres wide created between the building’s outer skin and the new masonry structure inside now offers a barrier to the sun’s rays on the south as well as a barrier to noise. The choice of transparent roofing material in this interstitial space, and in the foyer, makes these spaces reservoirs of light, ensuring modulated lighting of the classrooms. These spaces also serve for heat exchange at different times of year, while the stack roof promotes natural ventilation.
The principal energy efficiency strategy used in the building is therefore reduction of demand by optimising natural light, natural ventilation and thermal inertia. But to achieve the standard levels of comfort required of new public complexes with near-zero consumption, the building uses energy-efficient systems such as geothermal energy and solar panels integrated into the stacks. Its minimal energy consumption, well below that of the average building of comparable size, is thus combined with a percentage of self-generated energy.
The building created out of the former Cristalleries Planell glassworks preserves the brick pattern of the original construction, opening up the brutal infill added to the heritage walls and partly constructing new walls, as on the western façade, which is completely closed-off to the street but reveals the restored original friezes. The top level, made partly of brick and partly of glass blocks, is a transitional level between the historical structure and the stack roofs, which seem to “pull” the building toward the heavens, lightening its texture as they rise from the ground.

Suspended between past and present, the building does not cover the historical construction with the aura of a reliquary, but enhances its relationship with the city in the focus on definition of the corners of the new walls, the rounded glass blocks and brick walls. 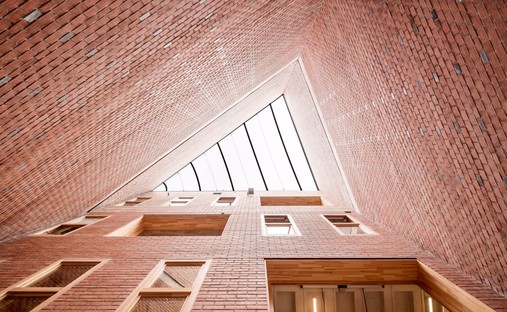 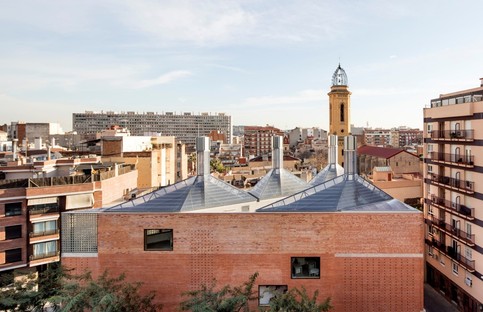 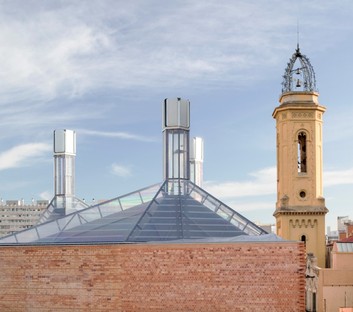 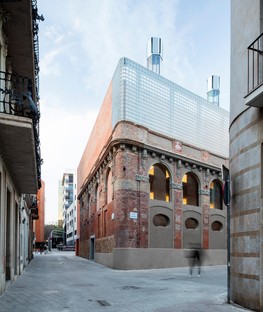 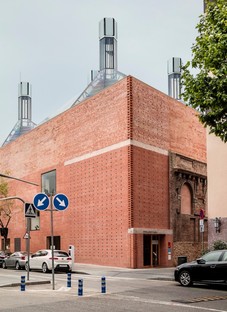 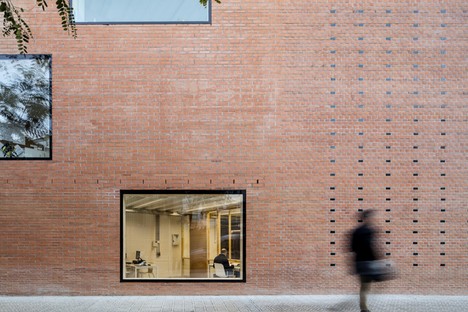 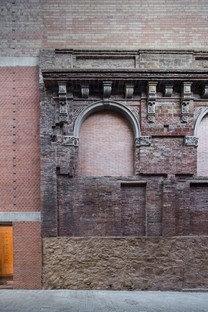 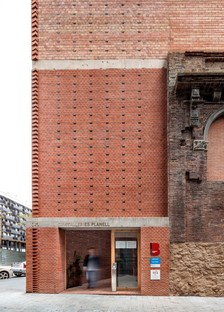 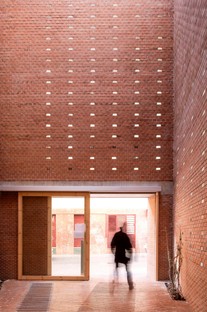 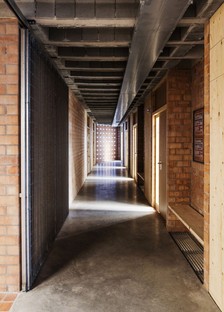 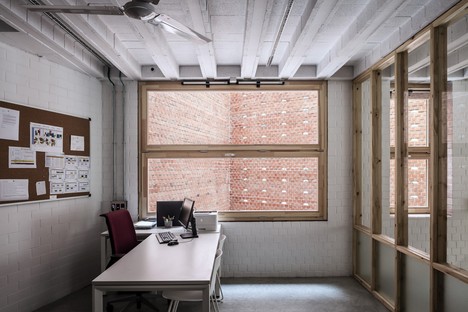 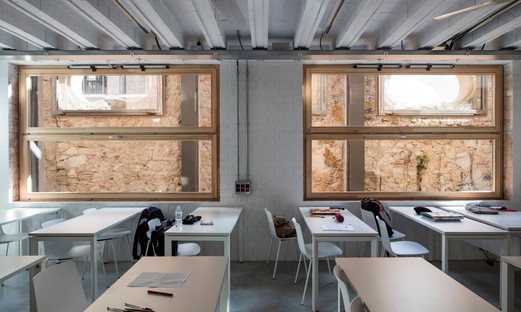 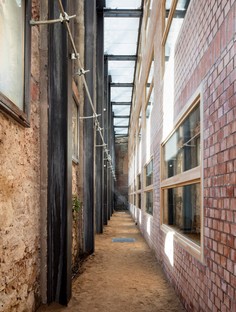 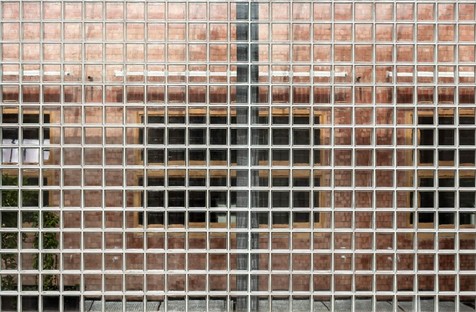 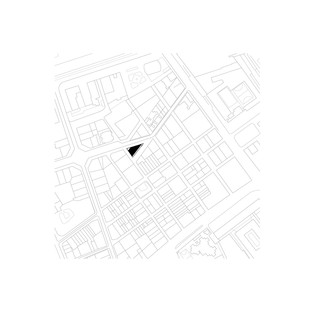 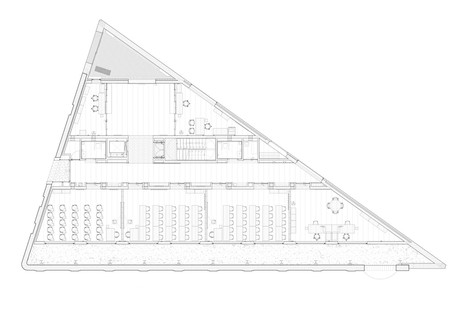 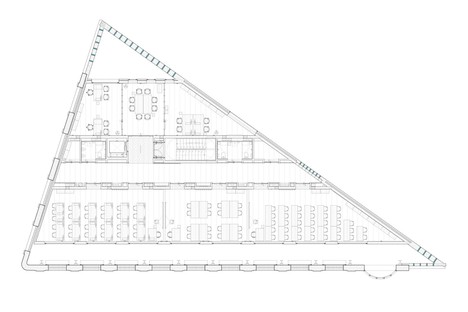 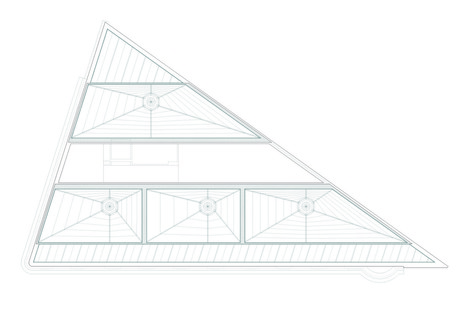 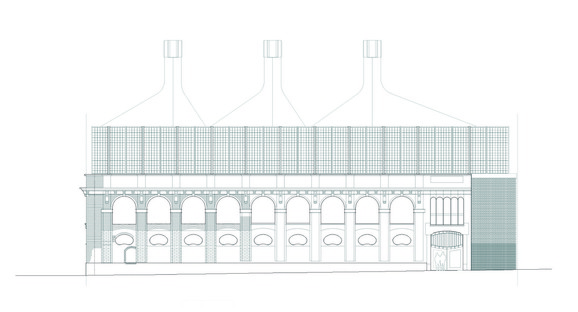 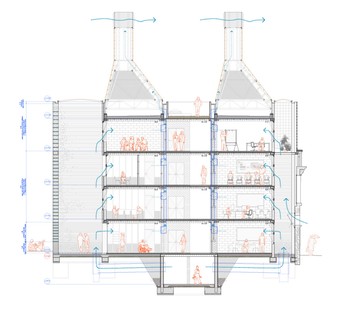 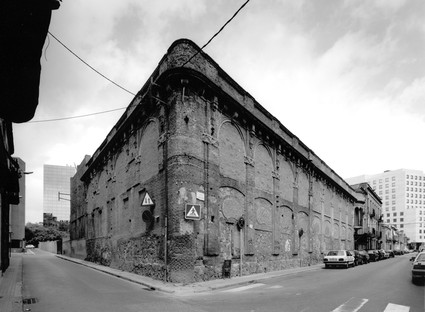 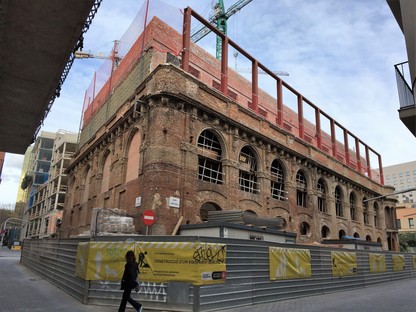 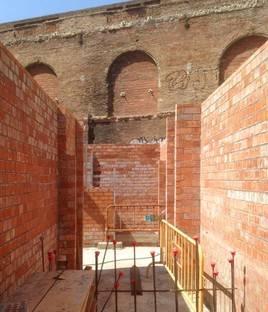