Bevk Perovic, Dekleva Gregoric, OFIS and Sadar + Vuga, perhaps the four most important architectural studios in Slovenia today, worked together on the Cultural Center of European Space Technologies (KSEVT) in Vitanje. Opened in 2012, the KSEVT abounds in symbolism linked with the iconography of space exploration. 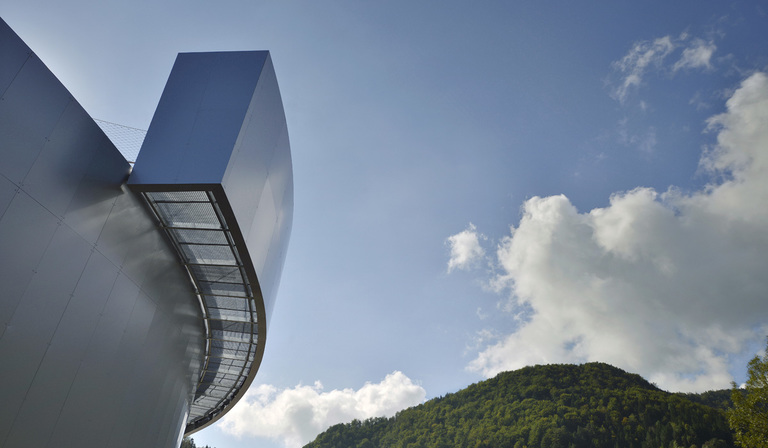 The municipality of Vitanje in Slovenia managed to bring together four of the country’s best-known architectural practices for the Cultural Center of European Space Technologies (KSEVT) project. Bevk Perovic, Dekleva Gregoric, OFIS and Sadar + Vuga worked together for about three years on the design and construction of KSEVT, which became not only a new centre for the study and promotion of aerospace technologies but a civic centre for Vitanje. Commissioned by the city government, the museum and cultural centre was funded by the European Regional Development Fund and the Slovenian Ministry of Culture not only on the strength of its programmes combining art, science and research but because of its bold architectural design featuring iconography recalling the history of space exploration.
The round concrete structure is surrounded by big concentric cylinders of aluminium, which are not co-planar but fit obliquely into one another to create apparent dynamism. The brightness of the aluminium becomes transparent in the big round glass enclosure that closes off its movement on one side, while at the other end, toward the stream running through the town, the same structure is closed in, almost resting on the ground. Hermetic and mysterious, the building is inspired by the designs of the first geostationary space station, described by engineer Herman Potocnik Noordung in his volume entitled “The Problem of Space Travel - The Rocket Motor“, published in 1929, which consisted of a solar power plant, an observatory and an inhabitable wheel.

This explains why such an ambitious work of architecture has been built in Vitanje, a country town in Slovenia with a population of just over two thousand: the roots of space exploration theory lie here, in the hometown of the engineer’s family, and the project pays homage to Slovenian pride.
Its height, just over the average height of the homes in Vitanje, and its synthetic form inspired by the scientific iconography of space missions, made famous above all in film (Space Station V in Kubrick’s 2001: A Space Odyssey was a wheel-shaped geostationary satellite), produce a design that breaks with the local figurative tradition while using a comprehensible language. Its undeniable dynamism is in fact obtained by simply rotating concentric cylinders on their axes. The glass wall in the hall leading to the ground floor auditorium can be opened up to join the interior with the square in front of the building and create a single public space for major events.

When we enter the building, the round central hall is embraced by the exhibition gallery, a ramp rising up to the floor above, gradually abandoning the sunlight of the hall and accompanying us into a more artificial environment where the bare, cold concrete makes us feel as if we are experiencing a solitary trip into space. The auditorium and the upper hall are joined by a big central opening in the floor between them, creating a bold architectural opening in the structure, towards the sky.
The “inhabitable wheel” is completed with an ’observatory” on its roof: to continue the analogy between architecture and space station, both offer new points of view on our world. 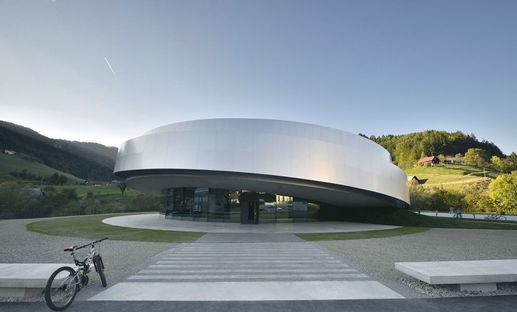 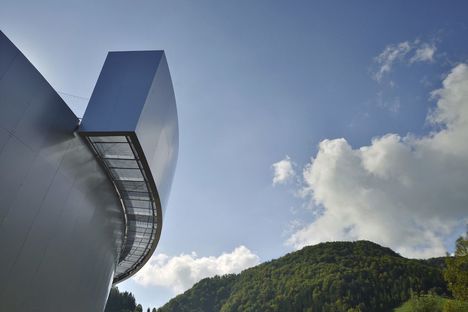 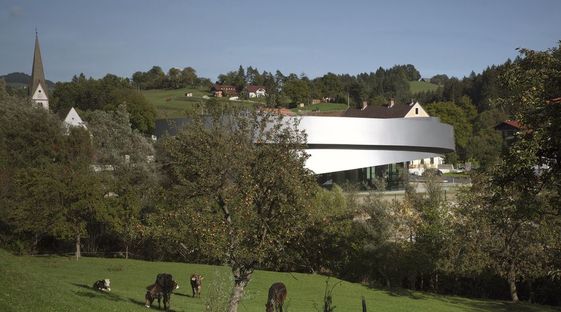 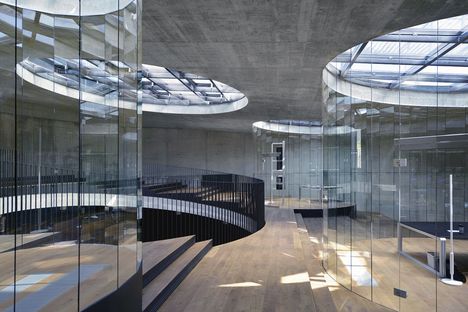 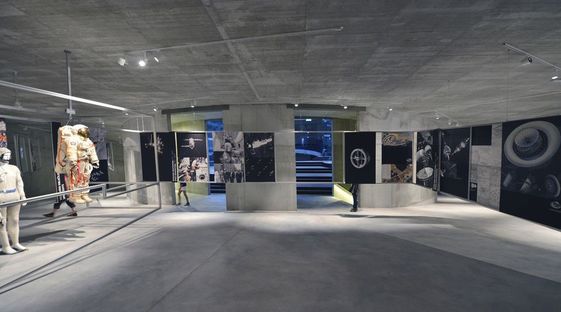 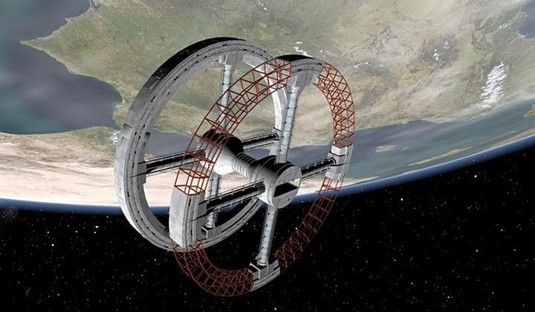 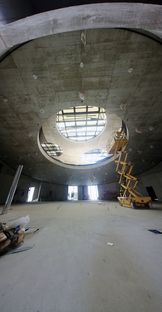 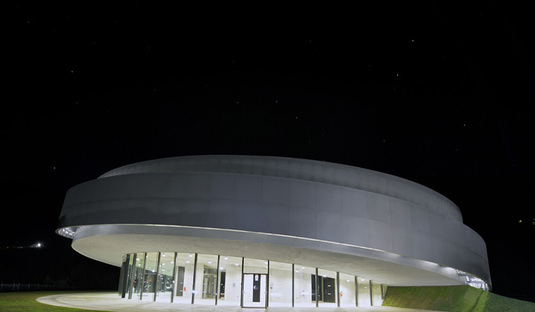 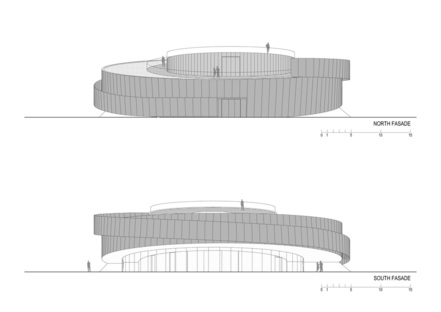 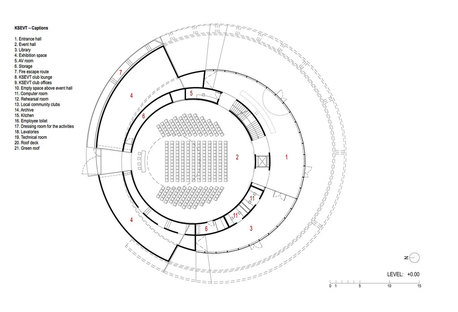 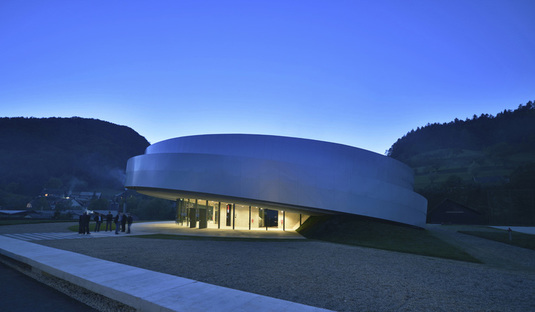 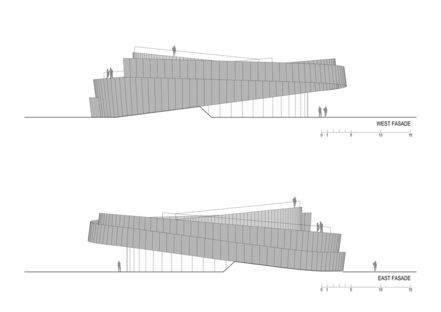 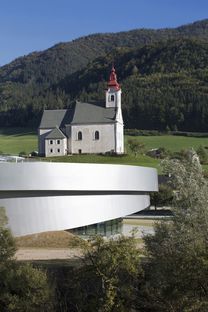 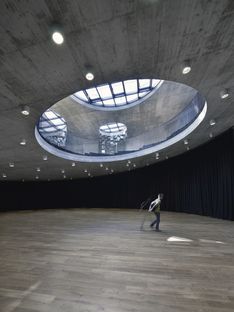 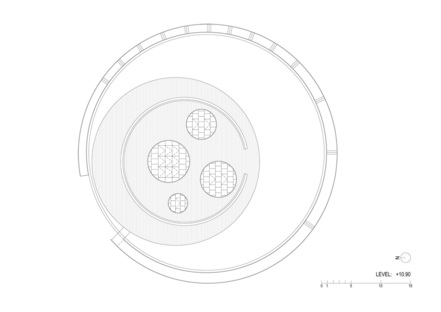 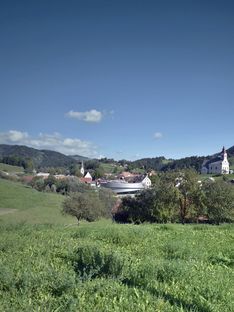