Milan Design Week always attracts lots of visitors looking out for the latest innovations in the world of design at the Furniture Fair in Rho and the Fuorisalone spread across the city.

Milan Design Week always attracts lots of visitors looking out for the latest innovations in the world of design at the Furniture Fair in Rho and the Fuorisalone spread across the city. Ilaria Specchia is an Italian designer who lives and works in France, and she has shared some of her impressions with us.

2016 Milano Design Week ended with new attendance records to the Rho exhibition centre with the Fairs and the many Fuorisalone venues across the city, with a total of 2400 exhibitions and more than 1000 events. This year with the added touch of the XXI Triennale del Design, back after twenty years with the international exhibition entitled 21st Century. Design After Design.
Assisted by this major event open from 2 April to 12 September, again with a number of venues around the city, on the back of EXPO2015, in 2016 Milan is still a very popular destination for trade professionals and inquisitive visitors alike.
During Milan Design Week we were busy at SpazioFMG and FAB Milano, but Italian industrial designer Ilaria Specchia was doing the rounds elsewhere for us. She lives and works in France, so #MDW2016 gave her the perfect opportunity to come back to Italy and ride the creative wave that distinguishes the major world design event held in Milan.

Her photos show us both creative design and furniture in and for itself, as well as a city that has changed a lot in recent years, with an ongoing fusion of places, people from all over the world, research and imagination. We could take it a step further and discuss Milan as the symbol of the philosophical approach of Webcreativity as explained by Paolo Schianchi: we are immersed in a creative dialogue ranging from the non-linear narrations to the Rococo, and we can see this in Ilaria Specchia's photos.

A metaphor for the near visual future, premiered at the 2016 Milan Design Week! 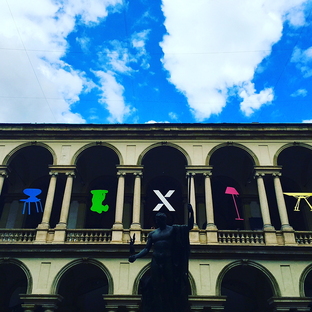