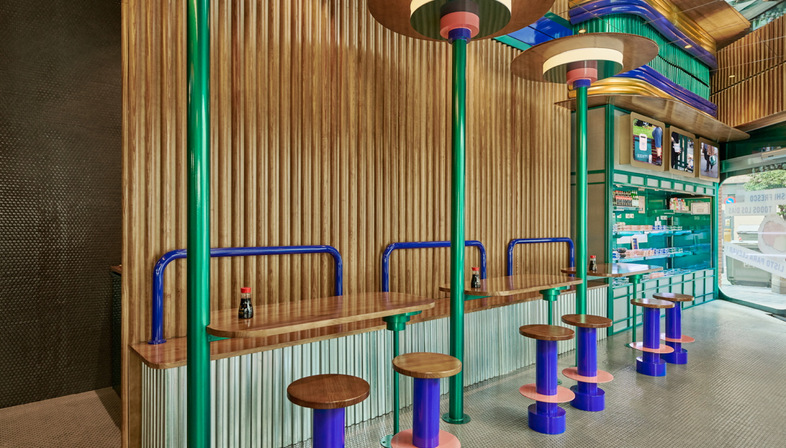 
Never change a winning team. The same goes for the third bar of the Kento takeaway chain, specialising in oriental food and founded in 2017 by Eduardo Hijlkema, a Valencia-based businessman who saw an opportunity to fill a gap in healthy lifestyles and commissioned the Spanish creative consultancy, Masquespacio established by Ana Milena Hernandéz Palacios to Christophe Penasse to bring the shop to life. When they were first approached, the two creatives developed the brand’s Visual Identity, which brings together aspects of Japan like the minimal style with a more general eastern aesthetic, all of which primarily designed to be flexible.
A design ethos that they have also adopted in this, the third Kento, which - at 100 square metres - is the largest to date so this time customers also have the option of dining in.
The first thing that strikes you about this place is its size, which is further emphasised by the characteristics of the existing building in Valencia centre that boasts high ceilings and a fully-glazed street-facing shopfront. Masquespacio has used an infinity mirror for the ceiling which, of course, makes the whole space look even bigger, and they have arranged most of the tables so that diners can see out onto the street, a natural extension of the sushi bar and in keeping with the street food tradition.
Then they added some interesting details like the grey mosaic tiled floors, repeated on and some parts of the walls, which create an eye-catching contrast with the more standout corporate colours of the brand used for the furnishings and lighting. By adding curved strips of wood on the walls, Masquespacio references the Japanese aesthetics of the venue and at the same time, they have added warmth to the interiors that otherwise feature quite a lot of “cold” industrial materials like metal and ceramics.
Another difference between this latest addition and the other two Kento sushi bars is that the gold in the third venue is less prominent, providing a simple counterpoint to the corporate colours of purple and green. This choice of colour combination gives the atmosphere a more elegant, sophisticated feel. Last, but certainly not least, the wooden ceiling over the service counter is clearly reminiscent of the traditional Japanese street food stands.
With their third Kento, Ana Milena Hernandéz Palacios and Christophe Penasse once again confirm their aptitude for architectural storytelling that they use to conjure up environments that are out of the ordinary but still closely connected with the territory. Not least because the furniture was designed by Masquespacio and then crafted by local artisans. 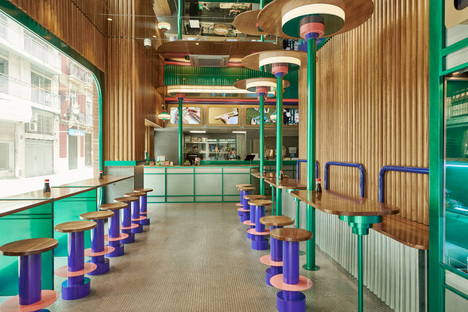 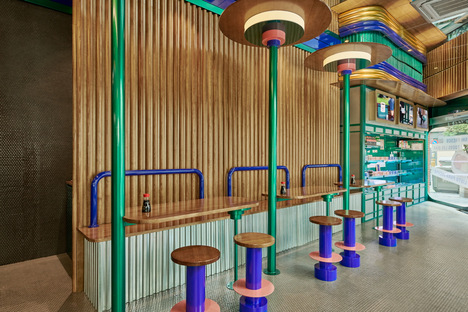 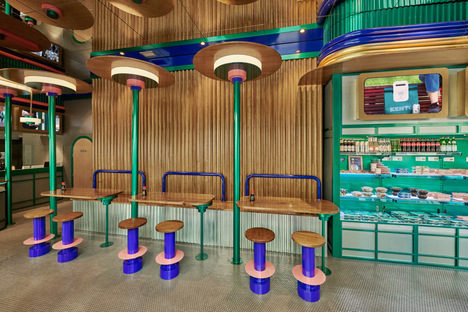 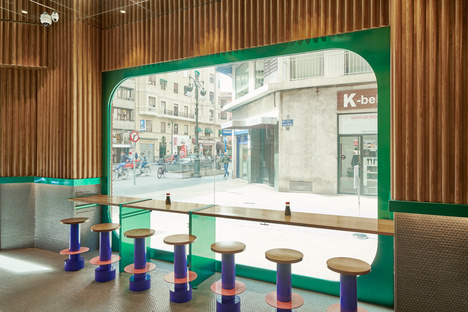 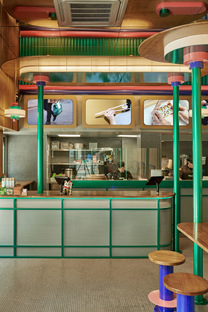 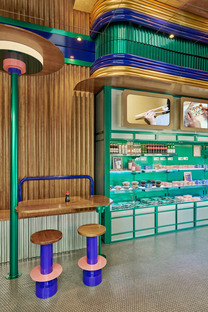