Masquespacio, the creative agency of Ana Milena Hernández and Christophe Penasse, designed the interior of a Greek fast food restaurant in Valencia, Spain inspired by the restaurant’s existing visual identity, which Masquespacio reinforces with great abstraction and elegance. 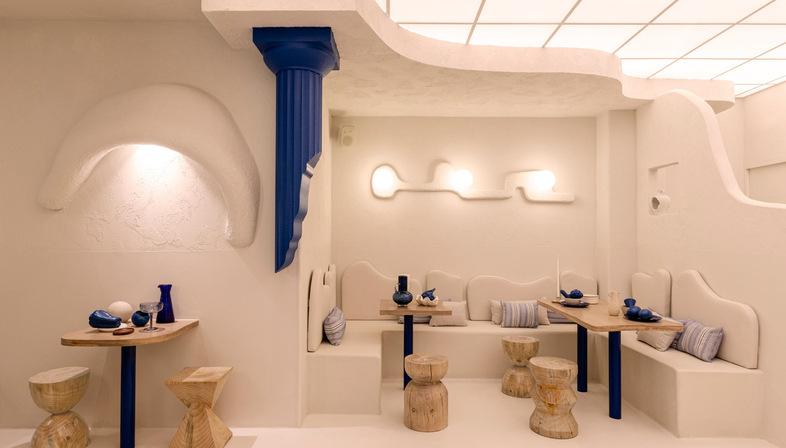 Interior design and gastronomy form an ideal combination, which we have frequently discussed, as it constitutes a true crucible of creativity when architects and interior designers are asked to create atmospheres in line with the restaurants’ menus, often tied with particular countries and traditions.
Masquespacio, an award-winning creative consultancy founded in 2010 by Ana Milena Hernández Palacios and Christophe Penasse, has stood out in this area for many years. Combining its founders’ disciplines of interior design and marketing, the agency offers branding and interior design projects for high-impact venues. The owners of a chain of souvlaki restaurants, a traditional Greek specialty, asked Masquespacio to design their first restaurant in Valencia. The restaurant, Egeo, posed a number of important challenges for the two creative designers, who were asked not to redesign the whole restaurant concept but to incorporate its existing branding, with its minimalist style, in the design concept.
But, as Christophe Penasse points out, this brief, which might at first sight appear to be a limitation, was actually very stimulating. “ We tried to materialize Greece in the space, further than just using the usual white and blue colour palette,” explains Ana Milena Hernández, “ applying the beauty of cementish materials that are so typical for the ancient Greek houses.”
In line with this decision, the walls above incorporate volumes with organic forms representing the essence of Greek architecture. With, of course, plenty of Greek columns, an element commonly associated with Greek culture and found in practically all Greek restaurants outside the country itself that can represent a trap for those with a less refined sensibility than Masquespacio. The studio excels at translating traditional concepts into attractive interior design without falling into the trap of tiresome stereotypes, and here they have redesigned the Greek column with a contemporary twist, in terms of both technology and colour.
According to the architects’ statement for the press, “ for the recreation of the columns in their modern version a blue colour was used, while they were produced with a 3D printer. At the same time led tubes were added to the structure. The regular color was challenged, next to its production technique, making them a contemporary element produced with 21st century technology.”
The Spanish studio also redesigned other details, such as the position of the bar counter in the restaurant. As appropriate in view of the speciality served at Egeo, souvlaki, a dish at least 3000 years old consisting of grilled meat brochettes which has become a common street food, the bar counter is positioned in the middle of the space, recreating the bustling environment experienced when ordering souvlaki from a street vendor in a Greek marketplace. Egeo is a restaurant in minimalist style with the bold, elegant visual impact typical of Masquespacio, all while maintaining the casual atmosphere typically associated with the Greek speciality it serves. 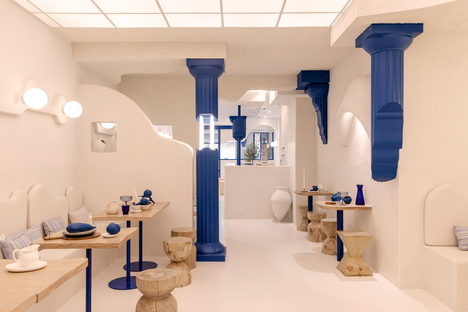 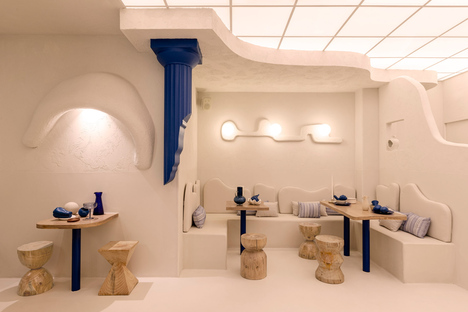 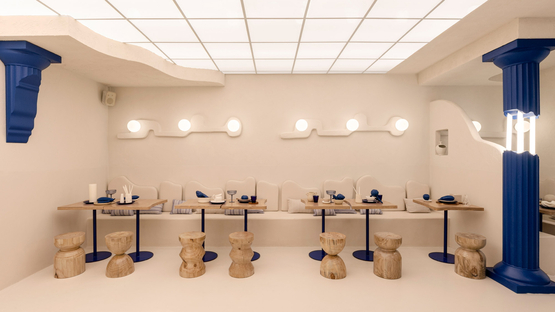 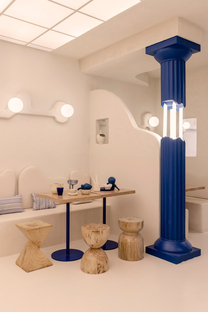 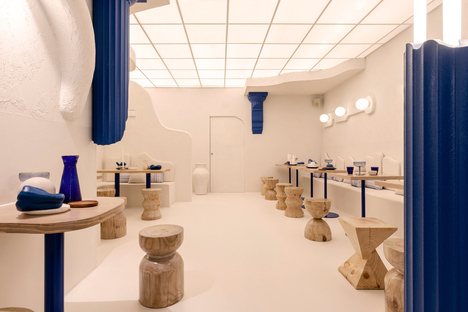 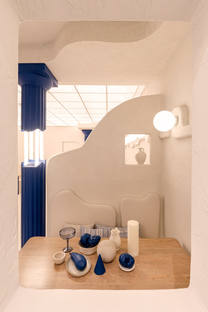 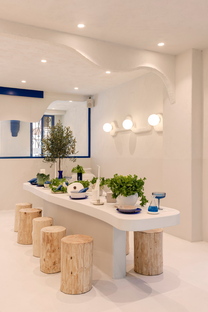 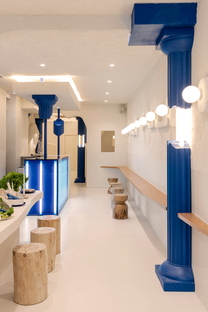 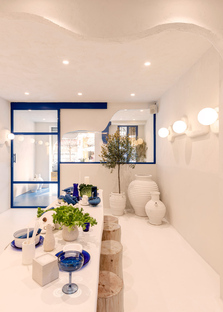 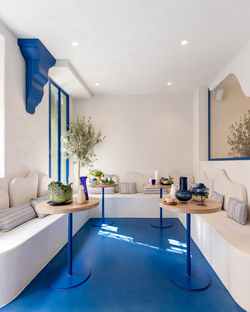 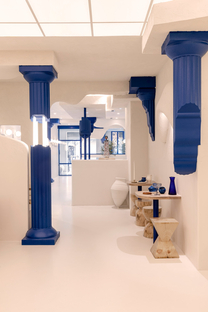 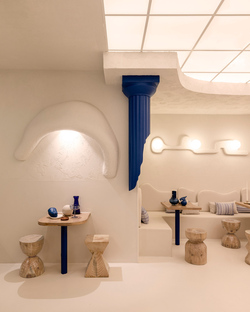