Veracruz-based Mexican architecture firm RED Arquitectos has a great gift for understanding the wishes of clients and turning them into something real. 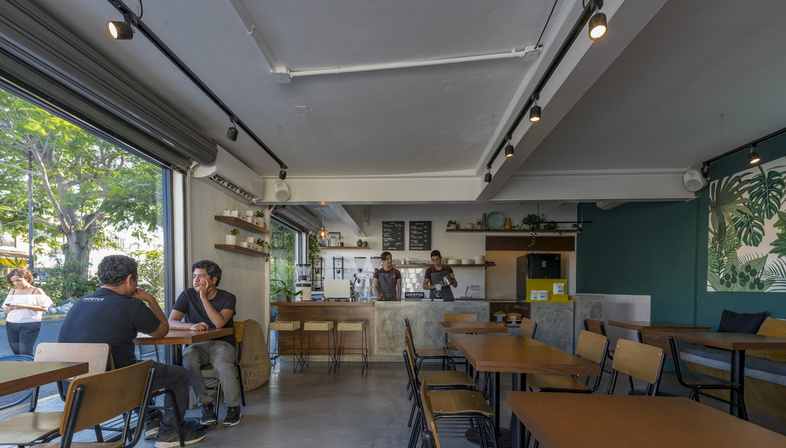 Veracruz-based Mexican architecture firm RED Arquitectos has a great gift for understanding the wishes of clients and turning them into something real. The Impetus coffee bar springs from the recovery of an abandoned space in the port of Veracruz that is now a lively showcase for the finest local coffee.


For IMPETUS, Susana Lopez and her team from RED Arquitectos worked with an unassuming old building in the port area of the city of Veracruz, Mexico's principal Atlantic sea port on the Gulf of Mexico coast, and turned it into a welcoming establishment where you can sample and buy the best coffees produced in the area. A challenge that adds to the already large portfolio of the studio that has always stood out for its projects based on a careful study of the existing architecture and its context. Could this be the secret behind the subtle touch of lightness and freshness that you can feel when you look at the images created by the photographer Luis Gordoa?
Perhaps not everyone knows that Mexico is the eighth largest coffee producer in the world and the Mexican state of Veracruz is the second largest producer in Mexico after the state of Chiapas, with about 153,000 hectares of crops. Most of them are small growers: about 90,000 with another 300,000 people involved in the production of the coffee itself. Among them are the founders of the IMPETUS roasting house, Rodrigo Quirós and his team, in the port area of Veracruz, who live here and roast the coffee beans sourced from local growers in four different regions, each with its own unique climate: Coatepec, Ixhuatlán, Huatusco and Zongolica. For this, they work closely with growers, adopting a fair trade approach and encouraging experimentation.
The task of RED Arquitectos was to tell the story of the territorial diversity in the State of Veracruz, marked by the central mountain range, its wealth and the joy of its founders, all while creating a welcoming and sociable ambience. The existing building was an abandoned and very unassuming site in the port area of Veracruz and the budget was tight. But as it often turns out, these conditions bring out the best in designers and foster their creativity, or at least for Susana Lopez and her team, who always find a way to bring everything together.
Inspired by the spirit of the Impetus Roasting House, where substance counts, the standout feature of the café interiors, dominated by a large counter for the baristas, is the simplicity of the materials, many of which have been reclaimed. The corner building interacts with its surroundings through large full-height windows, real display windows for the café, allowing passers-by to view the colourful mural by the Veracruz-based artist, Angel Martínez Javier, which portrays a stylised tropical forest and gives the very minimalist interior a special touch.
IMPETUS, therefore, stands as an invitation to taste the excellent regional coffees in a context where the aromatic beverage is king, a design project that focuses on substance and gives patrons a relaxing break from the hustle and bustle of everyday life. 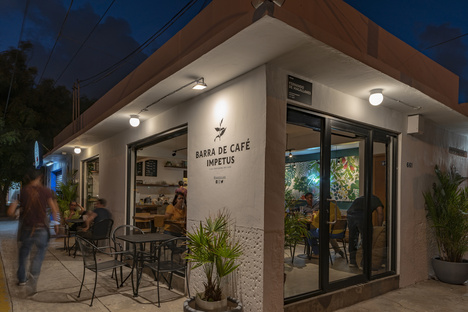 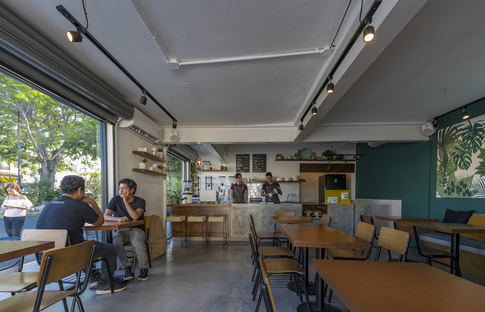 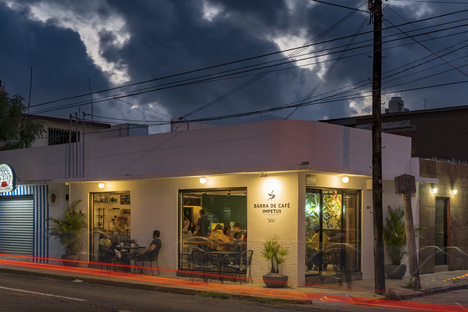 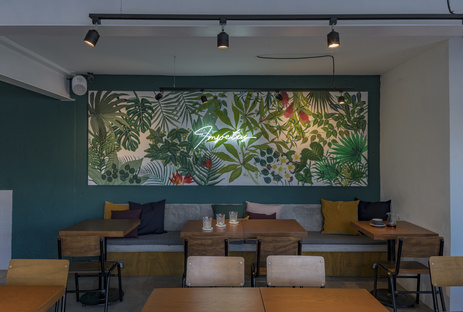 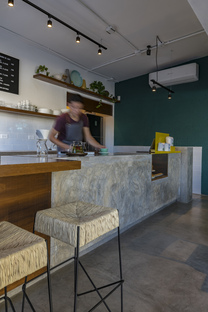 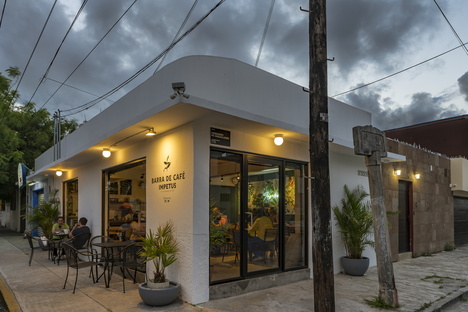 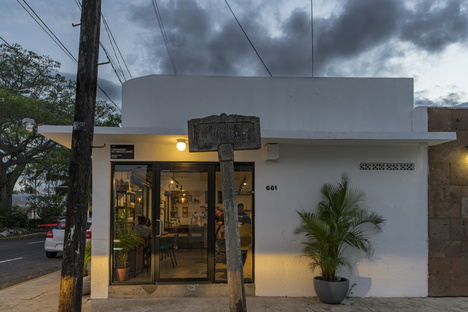 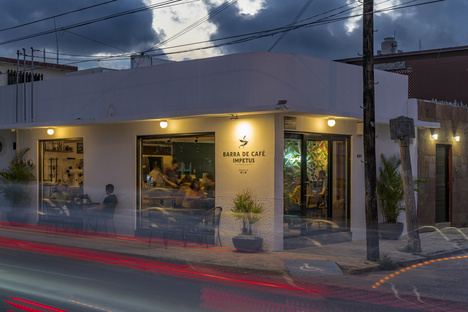 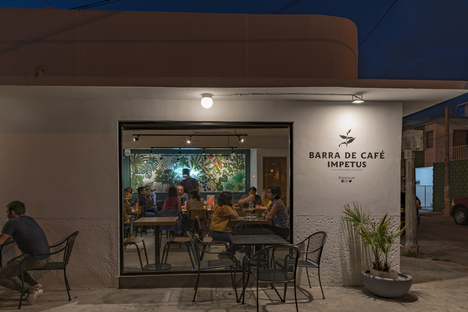 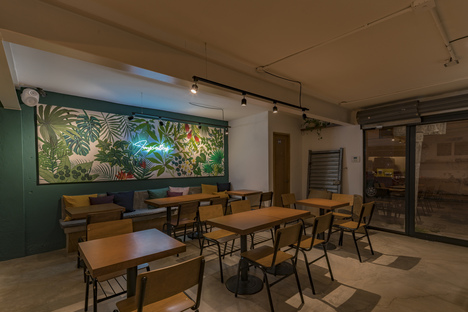 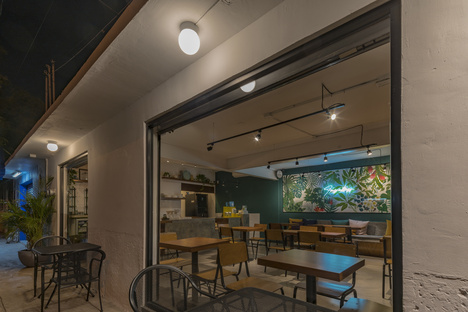 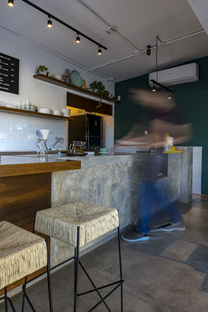 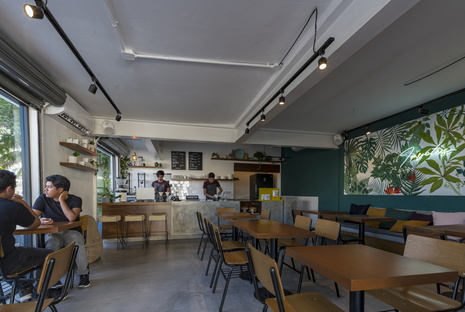 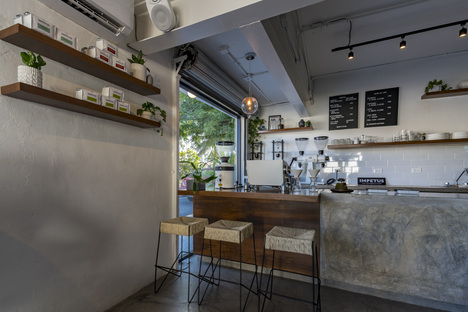 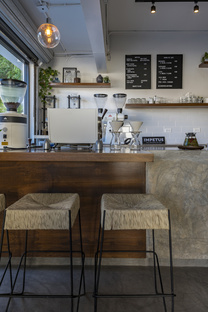 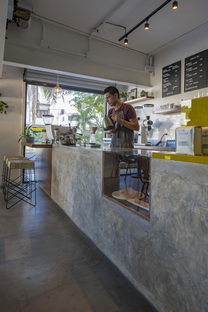